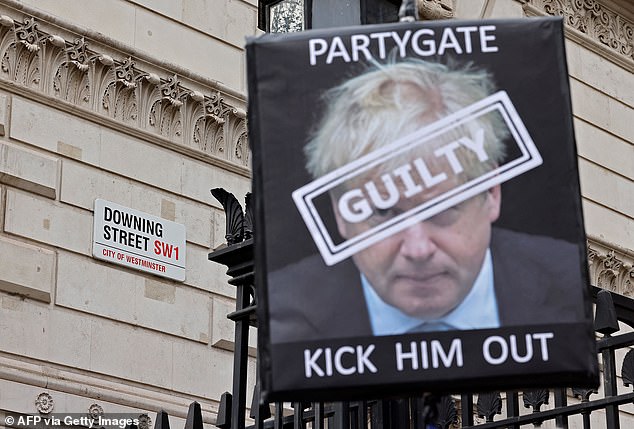 Across the battlefields of Ukraine, and in its ruined cities, the map of Europe is being redrawn in blood.

This unspeakably brutal war will affect the shape of our continent for decades.

And the impact on the economy of the United Kingdom, already badly battered by events on the eastern steppes, will be profound.

Yet the news bulletins this week , and front page headlines in many newspapers, have focused on a very different story: something so trivial it leaves me almost in despair.

Instead of reports of chemical weapons unleashed on civilians in the coastal city of Mariupol, where an estimated 20,000 people have been slaughtered, TV and radio pundits are incensed about social gatherings in Downing Street.

Each day sees ever-more appalling reports of mass graves outside Kyiv and other regions where the Russian army is retreating: horrifying pits filled with the bodies of women and children.

‘Instead of reports of chemical weapons unleashed in Mariupol, TV and radio pundits are incensed about social gatherings in Downing Street’

At the very moment BBC Radio 4’s Today programme was leading with denunciatory coverage of ‘Partygate’, the First Lady of Ukraine, Olena Zelenska, was begging the West not to look away from the slaughter in her country.

To hear political commentators ignore these heartfelt pleas, and instead argue about an uneaten birthday cake at No 10, during a lockdown nearly two years ago, is frankly obscene. We have to snap out of it.

There is an international crisis in play, with the potential to escalate — and swiftly — into World War III. Of course, I don’t underestimate the anger the British public feel over breaches of lockdown law by the Prime Minister and members of the Cabinet.

My own father died last year — from cancer, not Covid — in Greece. We were unable to hold a funeral for him because of lockdown restrictions there.

That was bitterly hard. It’s still a source of deep sadness to me, and I know millions of people across this country suffered similar miseries.

For anyone whose blood boils when they read that the PM and his staff seemingly disregarded regulations that they set themselves, I have complete sympathy. But as a country, we need to keep this in perspective.

‘Partygate’ is a dangerous distraction from what actually matters. Many people, I suspect, have seized on the story precisely because it is a distraction.

News from Ukraine has been so intense over the past six weeks that, as Mrs Zelenska warns, ‘war fatigue’ is already setting in.

We have become a culture with an unlimited appetite for celebrity tittle-tattle, and the conflicting accounts of Boris’s birthday bash feed that.

Supposedly a grand total of nine minutes long, featuring a plate of sausage rolls, a tub of ‘chocolate mini bites’, warm unopened lager and quite possibly a cake that never left its Tupperware box and that Boris may never even have seen: the triviality of it all is surely the point. But it’s the wrong obsession.

Russia is a rogue state, with nuclear weapons, on our continent — and its aggression is not about to stop. Nor is the war, to use former PM Neville Chamberlain’s phrase, ‘some quarrel in a faraway country between people of whom we know nothing’.

Its impact is being felt in Britain every day. As sanctions bite, Putin is using every tool in his arsenal to pile pressure on the West through rising prices of fuel and food, as well as other factors.

And this, surely, matters more to voters: the increasingly alarming cost of putting petrol in the car or doing the weekly grocery shop — and among the very poorest, perhaps even the choice between heating and eating. 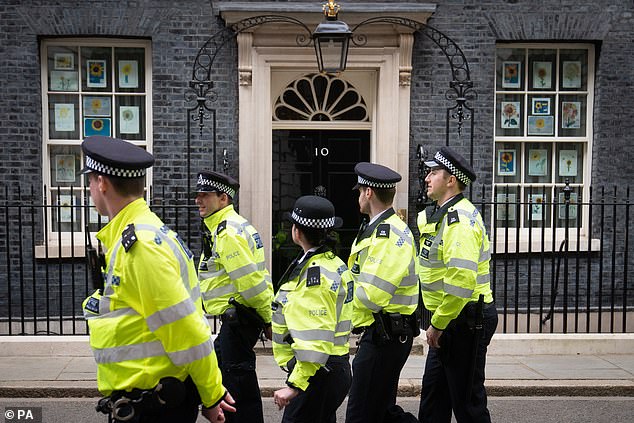 ”Partygate’ is a dangerous distraction from what actually matters. Many people, I suspect, have seized on the story precisely because it is a distraction’

Yet Labour’s deputy leader Angela Rayner has claimed the fines were evidence of ‘widespread criminality’ within Downing Street. Such hyperbole makes her look ridiculous. For one thing, these were not even criminal convictions, but fixed-penalty notices.

Rayner badly needs to look at the bigger picture. If Ukraine had fallen in a week, as Putin’s underlings assured him it would, the Kremlin would now be gearing up for an invasion of Georgia or Moldova, with the Baltic states — Lithuania, Estonia, Latvia — and even Finland also dangerously close to the claws of the Russian bear.

It’s a grave mistake to imagine that, because Putin’s militia has failed to occupy Kyiv or depose the Ukrainian government, the war is winding down. His fascist thirst to expand Russia’s empire remains unquenched.

Putin is deeply embarrassed by the humiliation of his army. He rules through fear, and no dictator can accept a result that makes him look weak.

His troops have been driven back — partly thanks to the redoutable bravery of the Ukrainian defenders, but also thanks to the Western arms, intelligence and money that have poured into the country.

Britain has led the way on this, of course, furnishing President Zelensky’s troops with, among other crucial hardware, NLAW anti-tank missiles: so effective that a single soldier can threaten an armoured convoy. Putin cannot put up with these losses for much longer.

Now he is preparing to switch tactics by bringing in General Aleksandr Dvornikov, the bloodthirsty psychopath known as the Butcher of Syria.

Dvornikov earned a reputation for unsurpassed brutality as he oversaw the destruction of Grozny in the rebel Russian province of Chechnya.

In 2015, he was sent into Syria, where Putin was propping up the regime of puppet dictator Bashar Assad.

The world watched in disbelief — but did almost nothing to prevent it — as Dvornikov surrounded the city of Aleppo with missile bases and reduced its streets to rubble. The death toll has never been accurately assessed.

This three-star mass  murderer believes in the obliteration of civilian centres as a way of maintaining momentum in his indiscriminate warfare.

He will begin in the east of Ukraine, where Russia already holds the Donbas region and the military supply chain is less vulnerable to attack.

And he will start pounding cities to oblivion. This, as President Joe Biden has rightly suggested, is genocide.

Putin, who knows he will be deposed and very possibly assassinated if he loses his war, is murdering Ukrainian children in their thousands.

He is also rounding up whole towns and shipping their populations to the depths of Russia. Paranoid and perhaps insane, he is also picking off members of his inner circle.

He is becoming a modern day Joseph Stalin — but this time with a nuclear arsenal that he has threatened repeatedly to use against the West.

The tyrant is endangering our whole civilisation — and we’re bickering about a birthday party. For God’s sake, we all need to grow up.

King Charles WANTS Harry and Meghan to attend his Coronation

Kim Kardashian is slammed after admitting she followed a crash diet to lose 16lbs...