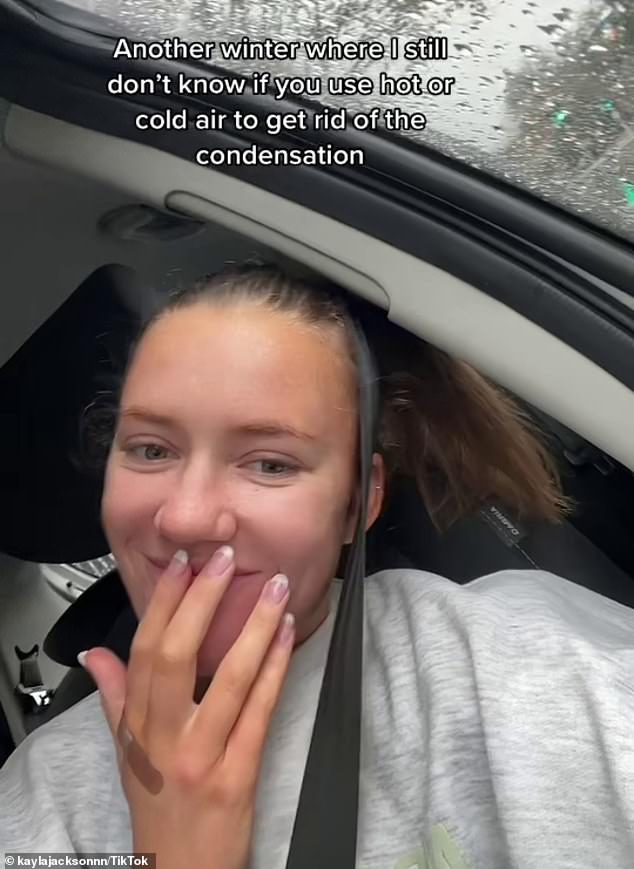 Woman sparks a debate over whether you hot or cold air to clear condensation on her car windscreen – so how do YOU do it?

A young woman has sparked a heated debate online after revealing she never knows whether to use hot air or cold air to unfog her windscreen.

Melbourne woman Kayla Jackson posted a video on TikTok to try to clear up the issue but declared hours later the fierce debate made her more confused than ever.

More than 1.2million people have seen the video with over 100,000 of them hitting like but only a thousand of those were brave enough to share their opinion.

Some people swear using cold air is the best method.

‘Always cold air to clear it faster then you can slowly turn the heat up but make sure air is still blowing on the windshield,’ one woman said.

‘Use the defrost setting, crank the heat and push the air con button. I dunno why it works but it just does.’

Others had varied, less helpful options. 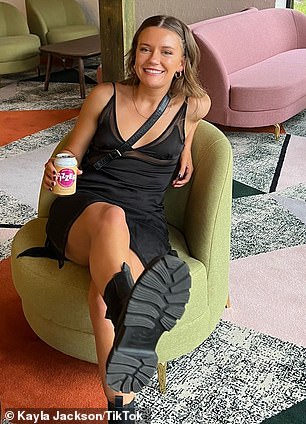 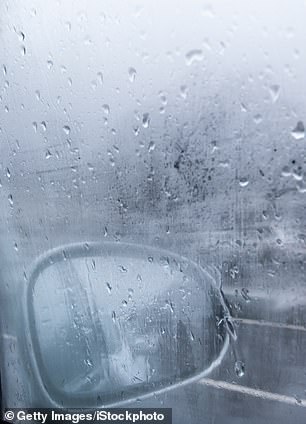 While some said they try hot and cold.

‘I just press all the buttons until something works,’ one woman said.

What temperature do you use?

‘Same – I blast it on every mode until it is fixed,’ said another.

While others admitted to overcoming to panic when the windows fog up.

‘I just pull over when it isn’t working and open all the windows,’ she wrote.

‘I have never related to something more, the panic I get when it starts to fog up,’ one mum wrote.

But some revealed it doesn’t matter what temperature it is set on, as long as the aircon is being used and the air is coming from outside the car.

‘Doesn’t matter! Just make sure the air conditioning is turned on and the demister button is on and put it whatever temp is comfortable,’ one man said.

While others said it ‘depends on the day’.

‘Your windscreen needs to match the temp outside to de-fog,’ one woman said.

How should you be clearing your foggy windows?

If your windows are ‘fogging up’, try leaving the air conditioning switched on with your heater set at a comfortable temperature.

You’ll be surprised how quickly the fog clears. It’s also a good idea to turn the re-circulation off when using the air-conditioning and allowing a little fresh air in when possible.

Funnily enough, using your car’s demister function is an often overlooked way to clear the windscreen of condensation.

In most modern cars the demister will engage the air-conditioner and the fan to force dry warmed air on to the windscreen.

In addition to the front windscreen demister, your car is also equipped with a rear window defroster. To keep the glass clear of condensation, the defroster uses an electric element to warm the glass sufficient to evaporate accumulated moisture. It’s a system that works as effectively as your windscreen’s defroster.

The oil, dust and other contaminants that build up on your windows gives water vapour more surface area on which to hold. A good car windscreen polish is the best way to clean the windscreen and help reduce the effects of condensation.

Clean glass reduces the amount of area these tiny droplets love, meaning your car’s glass will take longer to steam up in the first instance, and be quicker to clear with the methods above once foggy.

Today’s Karl Stefanovic admits he was ‘upset’ after being snubbed by Nine for election...