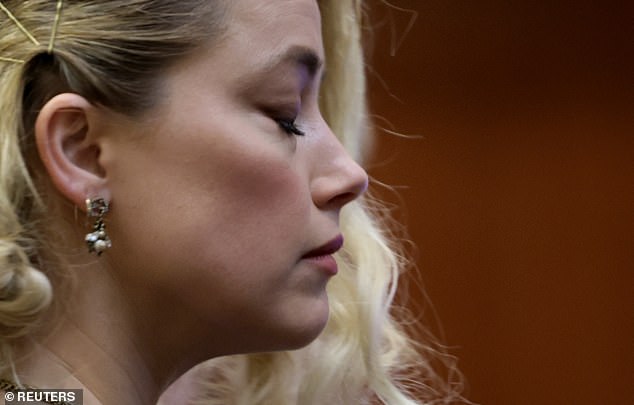 Hollywood has never seen a blockbuster quite like it – a charismatic leading man, his former leading lady and a racing rollercoaster that enthralled a global television audience for more than six weeks.

The one-time golden couple fought viciously for their reputations – and their careers – in a stunning sequel to the original two years ago, when the High Court in London had ruled that Johnny Depp was a wife-beater.

Last night, it was Depp who emerged victorious – and the key to his victory may well have been the three minutes of evidence by his former girlfriend, Kate Moss.

Beaming in over Zoom from her home in the Cotswolds, Moss – who had been Depp’s partner for four years to 1998 – coolly rubbished claims repeated by Amber Heard that Depp had once pushed her down the stairs.

And then there was the revelation that far from paying over $7million (£5.6million) from her divorce to charity – as Miss Heard had promised – she was forced to confess to the seven-member jury that she had stumped up just a fraction of that amount.

Daniel Bates, glued to his chair from start to finish, recounts the tortuous twists and turns of a trial that has captivated and appalled the world.

Over six weeks at the court in Fairfax, Virginia, the turbulent four years Depp and Miss Heard spent together was laid bare for all.

Through their highly-paid legal teams, the former lovers tore into each other over the details of their short marriage as they demanded eye-watering amounts of money, each claiming they had been defamed by the other. The Pirates of the Caribbean star wanted a jury to hand him up to $50million (£40million) but, more importantly, cast out an aspersion that he is a wife beater (a claim the London court case found was ‘substantially true’).

In return, his Aquaman star ex demanded double in damages – $100million (£80million) – saying her life had been ruined by a smear campaign against her when she divorced him and publicly accused Depp of assault in 2016.

While Depp had hoped the trial would help restore his reputation, it turned into a spectacle of a vicious coupling.

With millions watching as proceedings were live-streamed on the internet via a dedicated court broadcast, a story of Hollywood love turned to bitter hate unfolded.

The trial heard how the couple met 13 years ago with a kiss on the set of The Rum Diary in 2009 while they were both seeing other people – in Depp’s case the mother of his two children, French singer Vanessa Paradis. 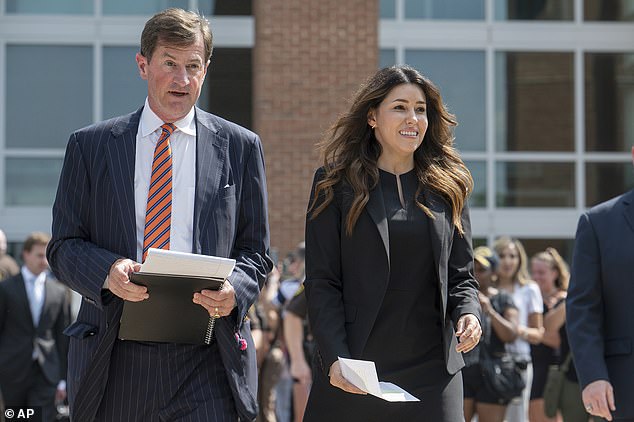 Depp and Miss Heard got together in 2012, married in 2015 and then divorced 15 stormy months later when she filed for a restraining order, arriving at court sporting a bruise that sparked a slew of speculation.

The jury saw dozens of texts, photos, videos, medical records and even pages from the former couple’s ‘Love Journal’ in which they hand wrote to each other.

But the bitterness on each side now eclipsed the love that was lost.

DEPP AND HIS MOTHER

Speaking in a halting, rambling voice, Depp portrayed himself as a ‘Southern gentleman’ who was scarred from his upbringing in Kentucky at the hands of an abusive mother.

Like with his mother, Depp would try to walk away from conflict but Heard never let him, he told the jury.

He said that Miss Heard’s claims were ‘heinous and disturbing’ and were ‘not based in any species of truth’.

Depp said that at the beginning of their relationship, Miss Heard felt ‘too good to be true’ but then she started to ‘reveal herself’.

According to Depp, it felt like he was reliving his relationship with his mother all over again, and Heard had a ‘pure hatred’ of him and was jealous of his career.

In a dramatic moment, Depp laid his hand on the side of the witness box as he explained how Miss Heard threw a vodka bottle at him in Australia in March 2015, severing his fingertip.

But under cross-examination, Depp was forced to explain horrific texts to the British actor Paul Bettany in which he wrote: ‘Let’s Burn Amber’. In a message to another friend, Mr Depp said he wanted to see Miss Heard’s ‘rotting corpse decomposing in the f****** trunk of a Honda Civic’.

Then there was the 2014 flight from Boston to Los Angeles where Miss Heard claimed that Depp was drunk and abusive before blacking out. The court was played an audio recording of Depp groaning ‘like an animal’ after he passed out.

There was also a video of Depp smashing up the kitchen of his home in Los Angeles while drinking what was described as a ‘mega-pint’ of wine. Trying to explain himself, Depp said: ‘I did assault a couple of cabinets but I did not touch Miss Heard.’

Heard told the jury she went from feeling like the ‘luckiest woman in the world’ when she and Depp began dating to being called a ‘c***’ on a near daily basis.

She described Depp as a violent and jealous man who would essentially veto films she wanted to do because he didn’t want her exposing her body on camera.

Miss Heard repeatedly cried as she described in graphic detail how Depp sexually assaulted her with a bottle in Australia in March 2015, one of a litany of shocking incidents. It happened during what Miss Heard called a ‘three-day hostage situation’ while Depp was ‘out of his mind’ on ecstasy pills and cocaine while supposed to be filming Pirates of the Caribbean 5.

Then there was the ‘cavity search’ incident, with Depp accused of intimately frisking his lover, accusing her of hiding cocaine, or the time he was said to have headbutted her leaving her with a suspected broken nose.

Miss Heard described summoning her make-up artist to cover up two black eyes and a split lip after Depp headbutted her when she was due to appear on the James Corden show the next day. 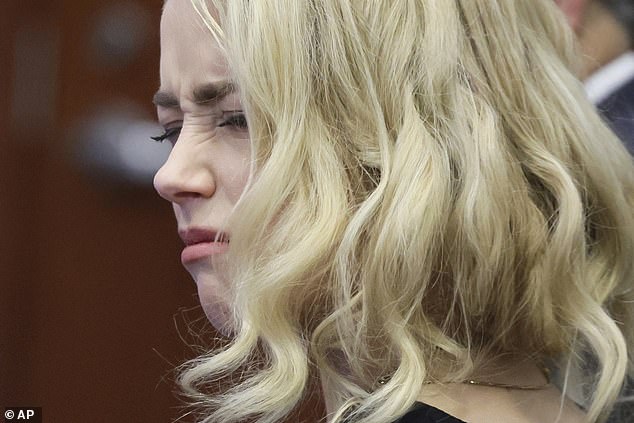 But last night’s verdict blew her claims away – with the jury siding with Depp and awarding him £8million.

Under cross-examination, Miss Heard admitted that she had not donated her $7million (£5.6million) divorce settlement to charity as she repeatedly claimed, including at the High Court in London in 2020.

Miss Heard claimed she saw the words ‘pledge’ and ‘donate’ as the same and claimed she had spent $6million (£4.8million) on legal fees, meaning she was unable to fulfil her promises. The five-men two-woman jury may well have taken a dim view of that.

She also had to explain an audio recording where she called Depp a ‘f****** baby’ and admitted she did indeed, as he alleged, hit him.

Depp’s legal team called a parade of his employees including security guards, his estate manager and his personal doctors and nurses. Among those who gave evidence for Miss Heard were her sister Whitney and her former best friend Rocky Pennington, who both detailed seeing incidents where Depp was violent and abusive.

Miss Heard’s equivalent, Dr Dawn Hughes, rejected this and said that Miss Heard had a clear cut case of PTSD from her years of trauma.

One of the few unbiased observers was Laurel Anderson, a marriage counsellor who treated Depp and Miss Heard. She told the court that they engaged in ‘mutual abuse’ and that Miss Heard ‘fought as hard’ as Depp did.

Kate Moss was called as a surprise last-minute witness by Depp’s team.

Over just three minutes of testimony from her home in the Gloucestershire, Miss Moss denied a rumour cited by Miss Heard that Depp once pushed her down the stairs.

In fact, he came to her aide and helped her get medical attention, Miss Moss said. It felt like a telling intervention.

The actress Ellen Barkin, another ex who starred alongside Depp in Fear and Loathing in Las Vegas, testified that he once threw a bottle of wine at her and she called him a ‘controlling, jealous man’.

She said: ‘I had a scratch on my back once that got him very, very angry because he insisted it came from having sex with a person who wasn’t him.’ But there were several famous names expected as witness who were not called, including Paul Bettany and Heard’s ex, Elon Musk.

THE PRANK IN THE BED

Depp suggested that Miss Heard left human excrement in their bed in April 2016 after they had a fight. His chauffeur Starling Jenkins said that Miss Heard once told him it was a ‘horrible prank that went wrong’.

But in her testimony Miss Heard suggested that it was one of their Yorkshire terriers, Boo, that did it, telling the court that the animal had ‘eaten Johnny’s weed as a puppy and had bowel control issues for life’.

She denied any involvement and said it was ‘disgusting’.

THE CIRCUS ON LIVE TV

Depp’s lawyers successfully argued for the trial to be televised which turned it into an international spectacle.

Millions of people tuned in every day on YouTube channels streaming it live and Court TV covered the case from gavel to gavel.

Despite the judge banning either party from signing autographs as they arrived in court, it still became a circus.

Depp rolled up in a large SUV with Bob Marley blaring out of the stereo to dozens of female fans screaming his name. Those same fans loudly booed Miss Heard when she turned up. 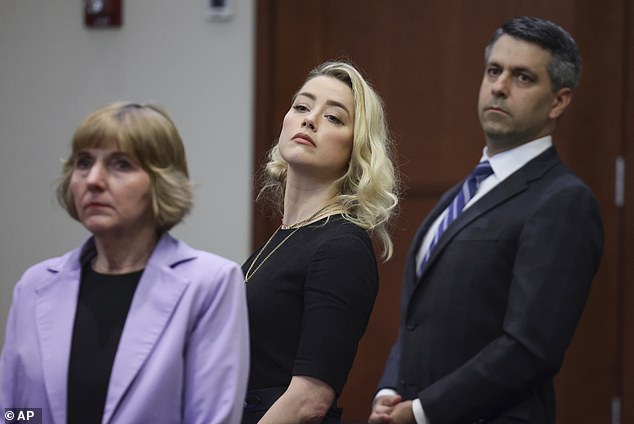 Depp and Miss Heard’s fashion choices became a subject of debate in themselves.

He favoured tailored three-piece suits in grey or blue while she favoured muted tones and 1930s style updo hairstyles.

On the Monday of the last week of the trial, a woman was removed from the courtroom after holding up baby and yelling: ‘Johnny I love you, this baby is yours’.

Depp’s fans swamped social media with #justiceforjohnny trending repeatedly, as did #amberturd and other unrepeatable slurs on her character.

Last night, in the wake of the verdict, the social media furore was set only to get worse.

Why did it take 15 years to make rapist child molester Christian Brueckner a...

‘We had sex in front of the fire’: Kim Kardashian spills on her naughty...