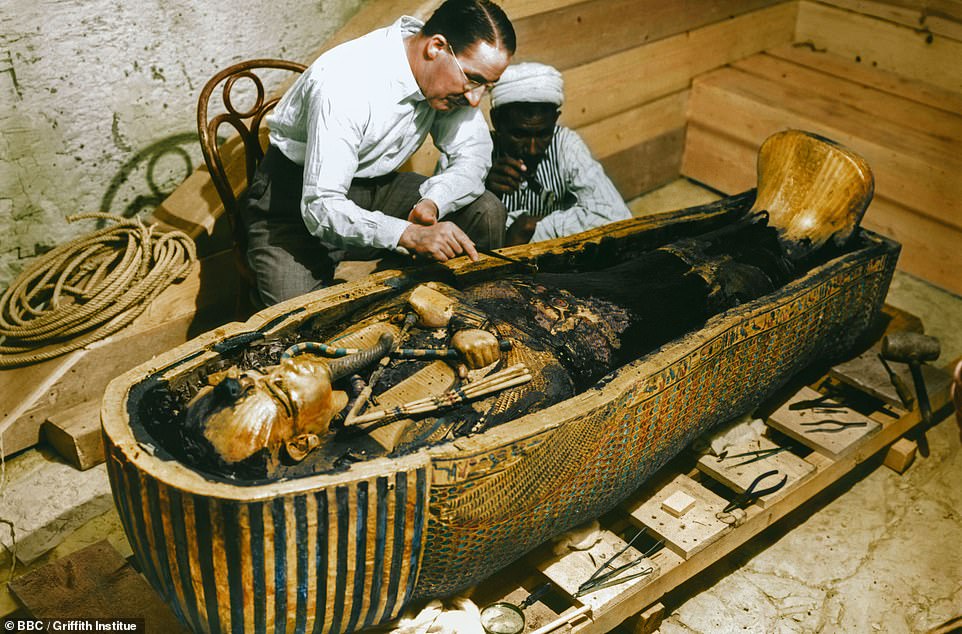 When archaeologist Howard Carter found the resting place of the boy king who had been dead for 3,000 years, few would have thought that it would be another half-century before the treasures from his tomb came to Britain.

But when 50 priceless artefacts that were found in Tutankhamun’s tomb after its discovery on this day in 1922 were finally put on display at the British Museum in London in 1972, the interest was unprecedented.

Opened by the Queen in March, the ‘Treasures of Tutankhamun’ exhibition beautifully displayed just a small fraction of the more than 5,000 artefacts found by Carter and his team.

But that did not stop hundreds of people from queuing for more than 14 hours overnight before the exhibition opened as they sought to be among the first to look at some of Ancient Egypt‘s most precious treasures.

In the six months that the artefacts including Tutankhamun’s death mask were on display for, more than 1.6million people queued to see them.

Dramatic photos show huge crowds of people stretching far beyond the museum’s perimeter, with police at one point holding back visitors as they waited to get in.

On the exhibition’s last day, in September, there were still thousands frantically trying to get a final glimpse of Tutankhamun’s treasures – but an employee with a loudhailer had to tell them: ‘I am very sorry, it is the last day, so they are going to put him to sleep now for another 3,000 years.’

The discovery of Tutankhamun’s tomb in Egypt’s Valley of the Kings made headlines around the world. Treasures that were found also included the pharaoh’s solid gold coffin, multiple thrones, furniture, food and wine.

Carter had been bankrolled by the 5th Earl of Carnarvon, who had only reluctantly agreed to fund the archaeologist’s search for one more year in 1922 after years of what had until then proved to be a fruitless hunt.

When archaeologist Howard Carter found the resting place King Tutankhamun in 1922, few would have thought that it would be another half-century before the treasures from his tomb came to Britain. Above: Carter is seen in October 1925 with an Egyptian workman as they examine Tutankhamun’s innermost coffin made of solid gold, inside the case of a second coffin 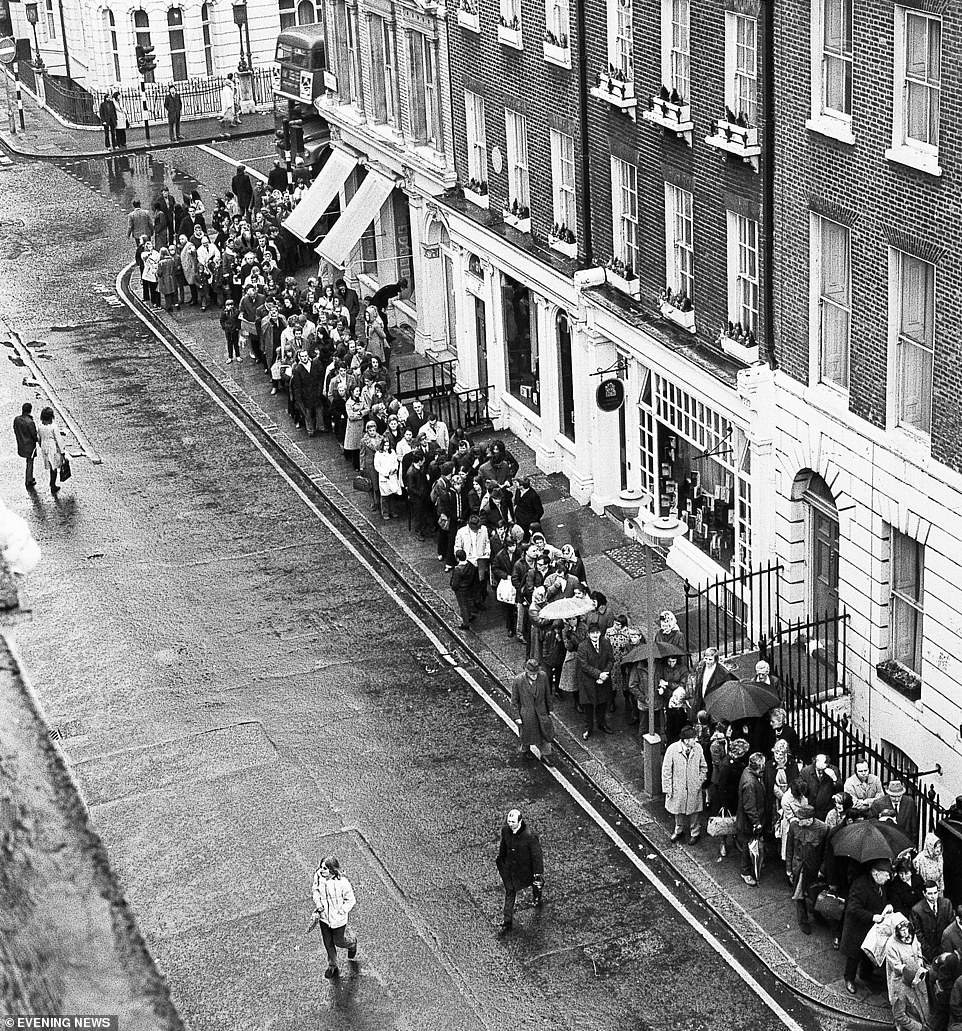 When 50 priceless artefacts that were found in Tutankhamun’s tomb after its discovery on this day in 1922 were finally put on display at the British Museum in London in 1972, the interest was unprecedented 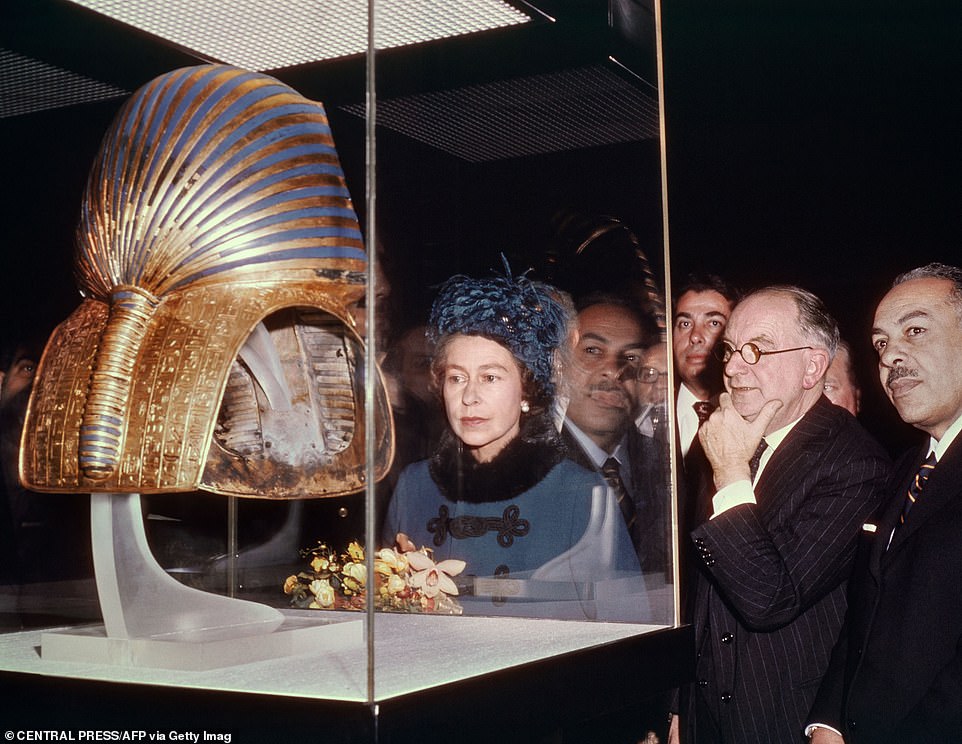 Opened by the Queen in March, the ‘Treasures of Tutankhamun’ exhibition beautifully displayed just a small fraction of the more than 5,000 artefacts found by Carter and his team 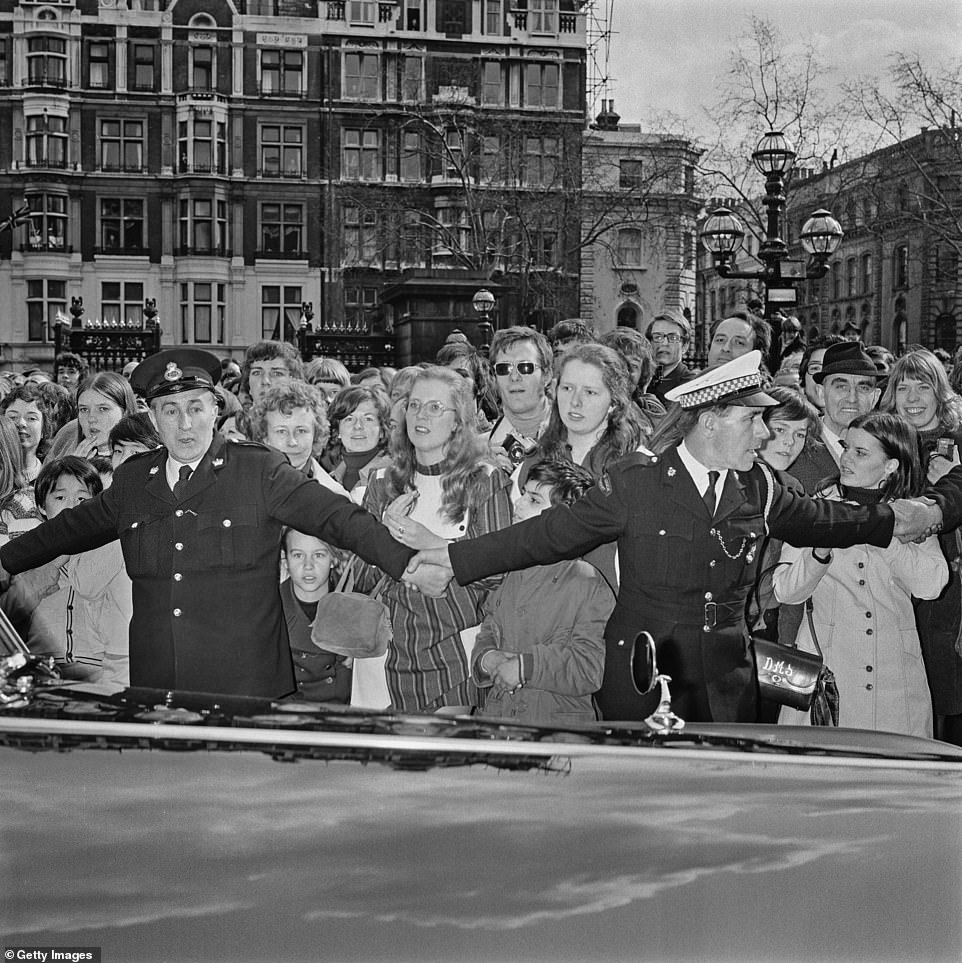 Letter by Howard Carter rebutting accusations his discovery of Tutankhamun’s tomb was a hoax is set to sell for more than £5,000

A rare letter by Howard Carter rebutting accusations that his discovery of Tutankhamen’s tomb was a hoax has emerged for sale.

The British archaeologist was writing to a solicitor, demanding that James Ogden apologise publicly for claiming he was absent when the mummified Egyptian pharaoh was uncovered.

Ogden, who owned a luxury jewellery store, worked with Carter to restore some of the treasures found in the tomb exactly 100 years ago.

In a lecture at Cambridge University he publicly suggested Carter was not present during the excavation.

Carter hit back that there was ‘not a word of truth’ to Ogden’s claim and suggested he ‘contradict [himself] publicly with an apology’.

Not only did the claim draw into question Carter’s repute, it also threatened to cause him legal trouble as his absence would have ‘directly breached’ his contract with the Egyptian Government who gave permission for the dig.

He went on: ‘I think you will agree that it is detrimental to me.

‘Apart from the fact that there is no truth in the statement, my absence during the progress of that excavation would have been a direct breach of contract, i.e. the concession granted by the Eg. Gov. to Lord Carnarvon and myself.’

Letters by Carter referencing Tutankhamen’s tomb are incredibly rare and command high prices at auction. This one is tipped to sell for more than £5,200 ($6,000).

It is one of several documents and personal effects which belonged to Carter being presented for sale at R&R Auctions in Boston, US.

Egypt had become independent from Britain just months before Carter and his team discovered Tutankhamun’s tomb. It meant that the country’s government insisted that the permanent home of the artefacts had to be in Egypt.

When the treasures did start to tour the world in the 1960s, they headed to the US, Japan and France – but Britain was kept off the list.

This was in part down to Egyptian president Gamal Abdel Nasser’s refusal to allow the loans to take place.

After his death in 1970, negotiations finally secured their passage to Britain. The artefacts were insured for £10million through Lloyd’s of London and there was a 50p admissions charge for visitors to the British Museum.

Along with Tutankhamun’s gold mask, the displayed objects also included a gilded shrine, a large bed, a gold-emblazoned statue of the pharaoh, a dagger crafted from a meteorite and a pair of golden sandals.

However, the tomb’s outer entrance did bear signs of forced entry, with experts at the time concluding that two break-ins had occurred soon after Tut was laid to rest.

The robbers only took away smaller, portable items, but it is now believed that more than half the royal jewellery was taken.

When they were first discovered, many of the objects were found to have been arranged in a jumble  – where they had lain untouched for more than 3,000 years.

Carter initially viewed Tutankhamun’s tomb through a small hole made in masonry after two days of digging through a rubble-filled passage.

Holding up a candle, he looked inside and gave what is now a famous response to Lord Carnarvon’s impatient question: ‘Can you see anything?’

His tomb – which included four rooms – was filled with royal treasures, including a dagger made from meteorite.

The tomb also contained three coffins nestled within one another.

Shortly after it was discovered both the inner and middle caskets were transferred to the Egyptian Museum in Cairo, while the outer gilded coffin was left behind.

Seventeen of the objects on display at the British Museum had never been shown outside Egypt. They were taken to Britain on two civilian flights and a third Royal Air Force plane, which carried Tutankhamun’s death mask.

The exhibition had originally been set to last for three months, but ended up being open for six. Around 4,400 visited on its first day, with more than 30,000 coming in the first week.

The exhibition was protected by the largest security operation of its kind in history.

In charge was former Scotland Yard murder squad chief Jack Munnings, who promised to have guards watching the treasures ‘every second of every 24 hours.’

Speaking about the exhibition, Egyptologist Professor Joyce Tyldesley told BBC Radio 4’s Today Programme: ‘I still meet people today who talk about it. It was really, really influential and I think if you don’t remember it you won’t quite understand how important it was at the time.’ 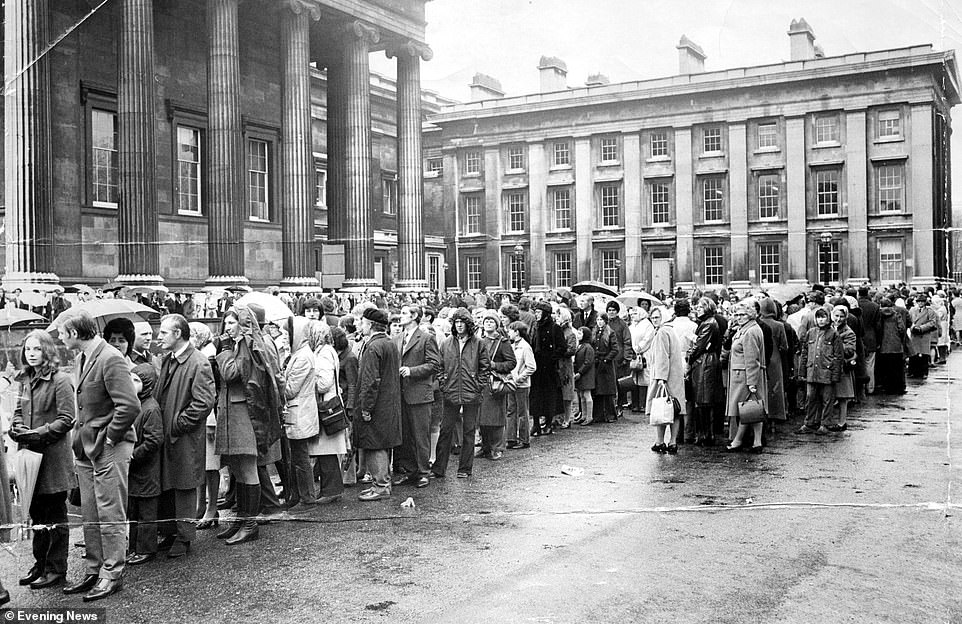 Dramatic photos show huge crowds of people queuing to get in to the Tutankhamun exhibition, with Britons hoping to see the treasures for the first time 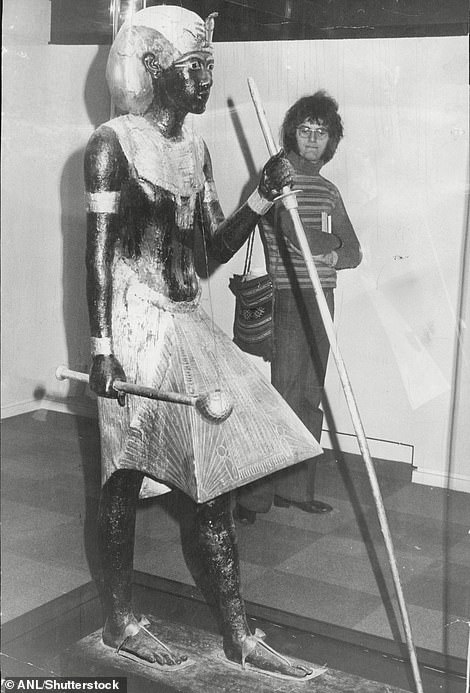 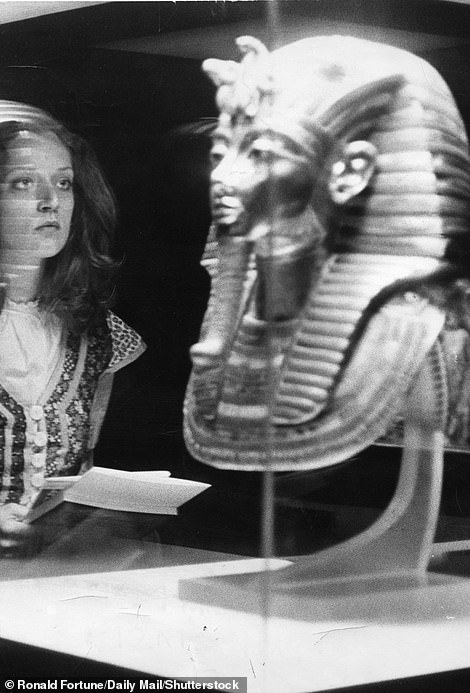 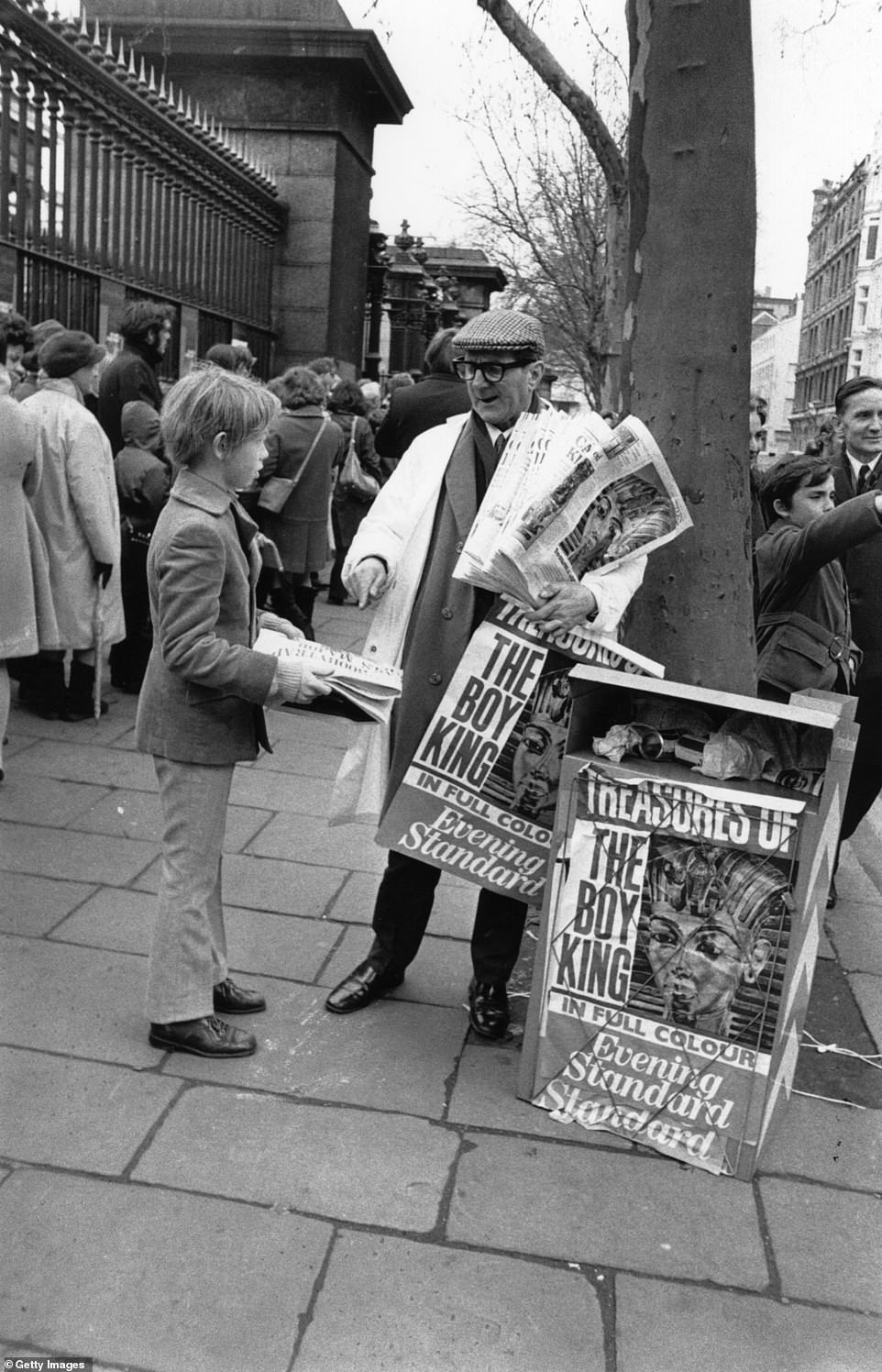 A newspaper seller on a street pitch outside the British Museum selling copies of The Evening Standard. The headline – ‘The Treasures of the Boy King’ 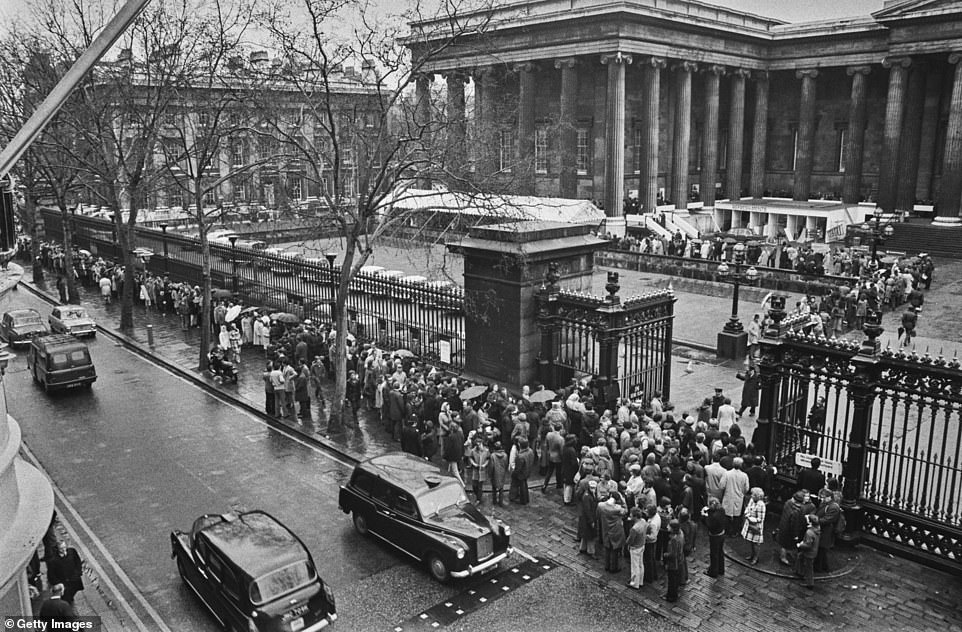 The exhibition had originally been set to last for three months, but ended up being open for six. Around 4,400 visited on its first day, with more than 30,000 coming in the first week

She told how, aged 12, she had visited the exhibition with her school but was among those who could not get in.

‘We were really excited, we were going to see Tutankhamun.

‘And we queued up and we actually managed to buy the tickets but then we realised that if we actually went into the exhibition we would miss the train home so we had to get money back from the tickets and go home and never actually saw him,’ she said.

Asked about the claim that Tutankhamun’s importance, she added: ‘He was probably less insignificant than we say he was but he did only reign for ten years and most of those he was a child.

‘So yes it is not the most conspicuous reign.

‘But since he died and since he was recovered surrounded by grave goods, and he is the only king to have been found in his intact tomb in the valley of the kings, he has really sparked the public interest.’ 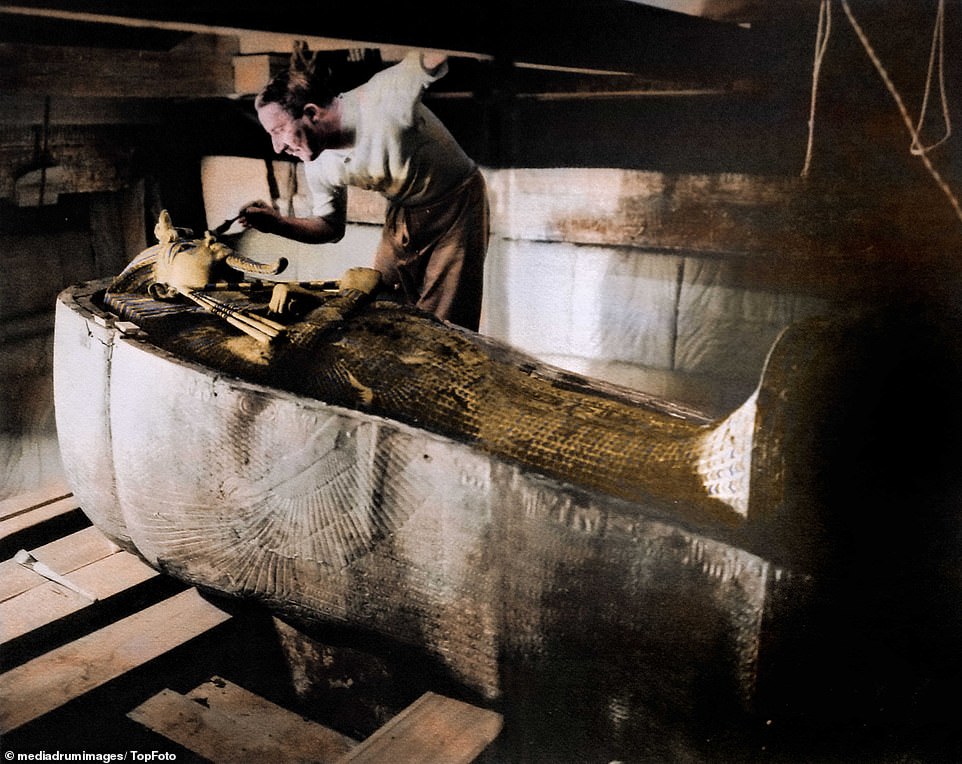 Howard Carter is seen examining the sarcophagus of Tutankhamun inside his tomb, which was more than 20ft underground 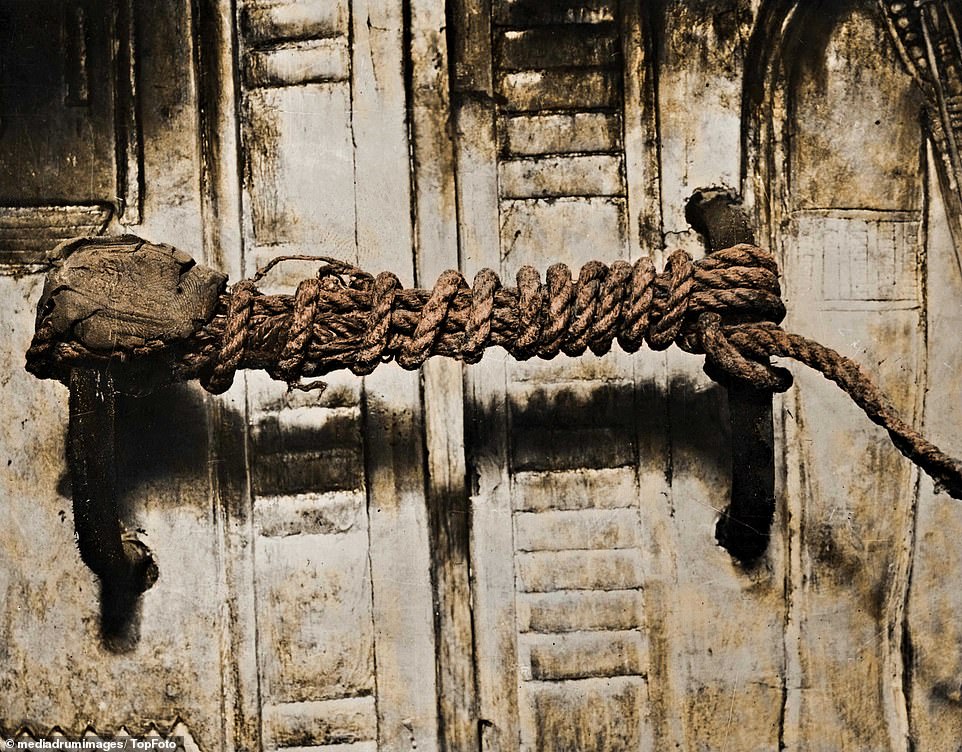 The seal on the corded doors of the second shrine of the sepulcre of King Tutankhamen. The seal was found intact 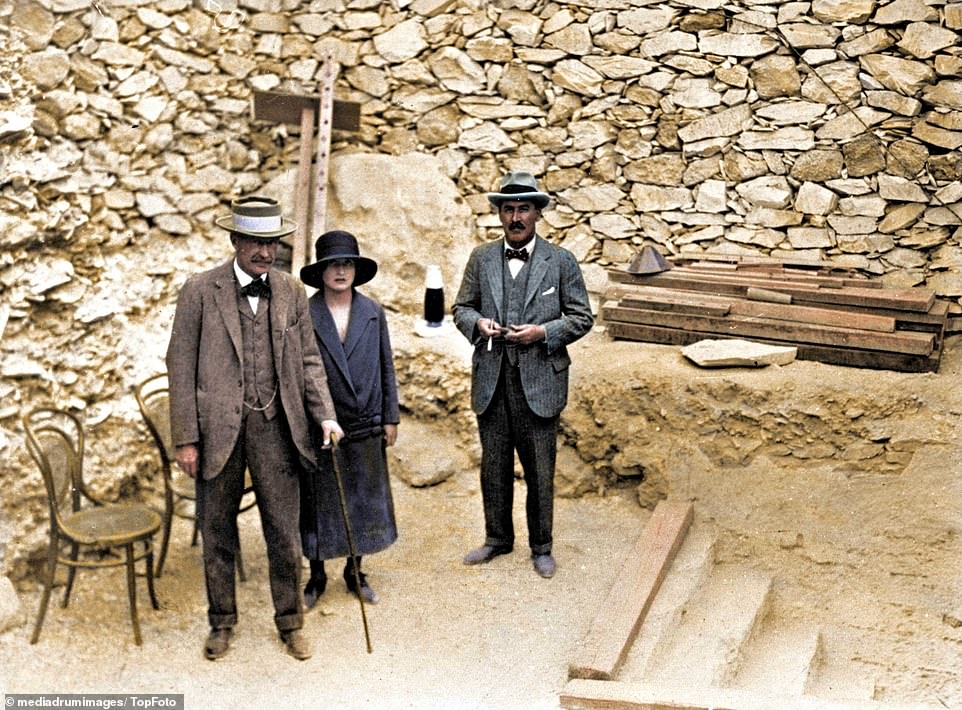 Lord Carnarvon, Lady Evelyn Herbert Howard Carter are seen at the entrance to the tomb of Tutankhamen 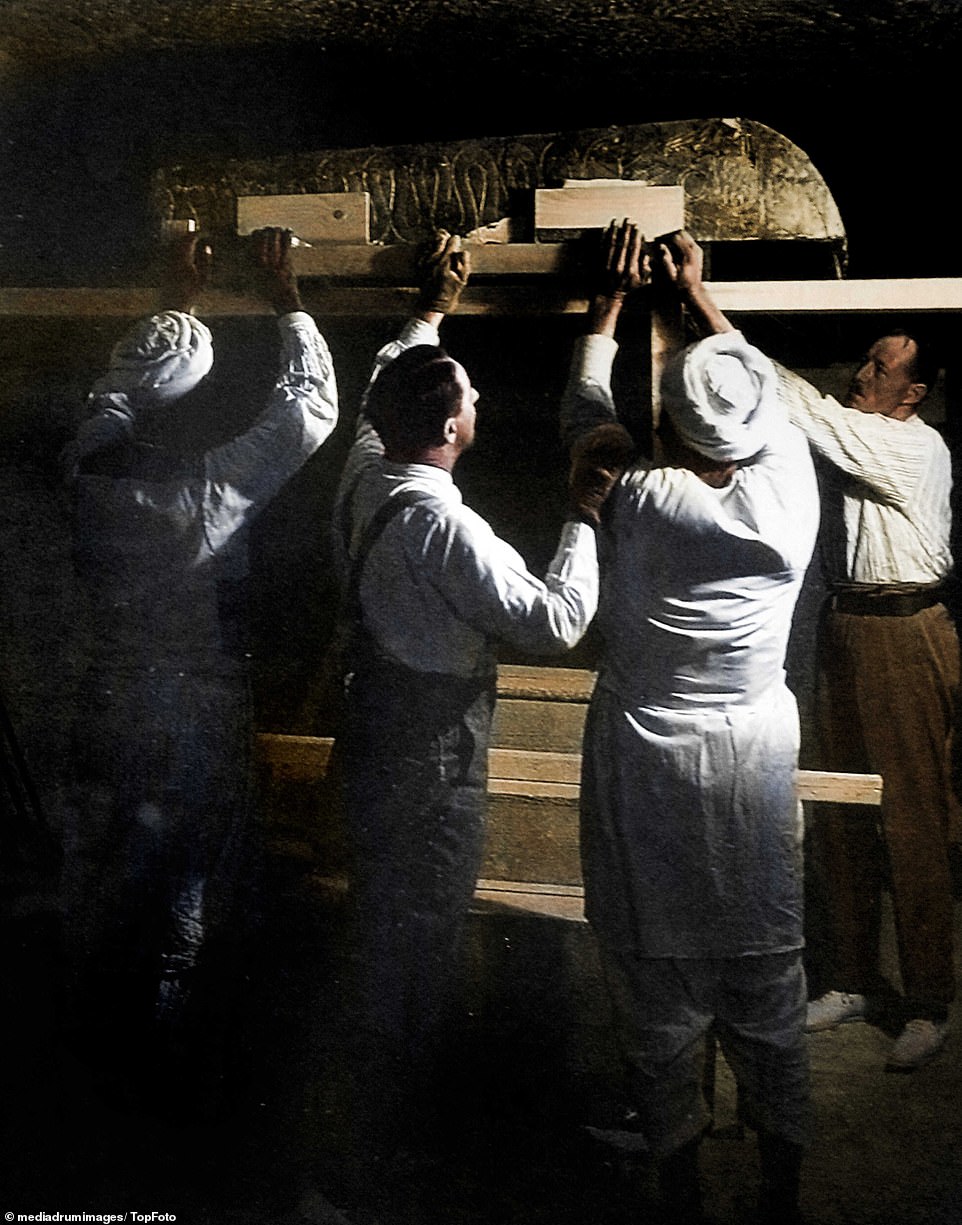 Workers are seen carefully handling a gold artefact inside Tutankhamun’s tomb. There were four chambers in total 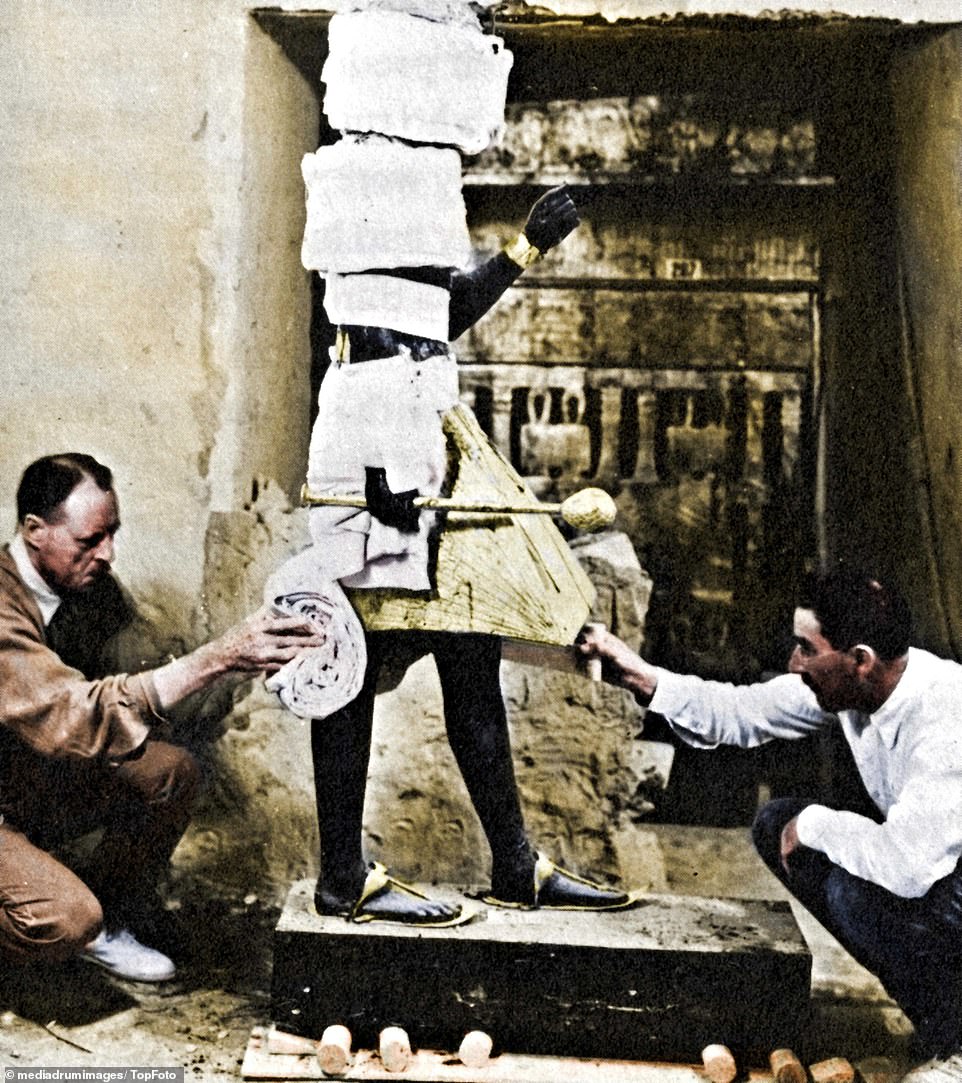 A life-sized statue of Tutankhamun is seen being wrapped ahead of it being moved from where it had stood for 3,000 years

Carter and the Earl of Carnarvon met in 1907 and the aristocrat agreed to fund his explorations. The pair ended up working together for the next 17 years.

Although their early years together were successful, the First World War put a pause on their work that was not lifted until 1917.

Afterwards, Carter did not come close to finding anything despite intensive searching and his team came close to giving up.

With Lord Carnarvon dissatisfied, he considered withdrawing his financial backing to Carter but ultimately agreed in 1922 to fund one further year.

Tutankhamun’s mummified remains are on display within his tomb in a climate-controlled glass box, whilst many of the treasures that were buried with him are held at the Egyptian Museum in Cairo.

But from 1923, they will be housed at the brand new Grand Egyptian Museum in Giza.

WHO WAS KING TUTANKHAMUN AND HOW WAS HIS TOMB DISCOVERED?

The face of Tutankhamun was an Egyptian pharaoh of the 18th dynasty, and ruled between 1332 BC and 1323 BC. Right, his famous gold funeral mask

Tutankhamun was an Egyptian pharaoh of the 18th dynasty, and ruled between 1332 BC and 1323 BC.

He was the son of Akhenaten and took to the throne at the age of nine or ten.

When he became king, he married his half-sister, Ankhesenpaaten.

He died at around the age of 18 and his cause of death is unknown.

In 1907, Lord Carnarvon George Herbert asked English archaeologist and Egyptologist Howard Carter to supervise excavations in the Valley of the Kings.

He spent several months cataloguing the antechamber before opening the burial chamber and discovering the sarcophagus in February 1923.

When the tomb was discovered in 1922 by archaeologist Howard Carter, under the patronage of Lord Carnarvon, the media frenzy that followed was unprecedented.

Carter and his team took 10 years to clear the tomb of its treasure because of the multitude of objects found within it.

For many, Tut embodies ancient Egypt’s glory because his tomb was packed with the glittering wealth of the rich 18th Dynasty from 1569 to 1315 BC.

Egypt’s antiquities chief Zahi Hawass (3rd L) supervises the removal of the lid of the sarcophagus of King Tutankhamun in his underground tomb in the famed Valley of the Kings in 2007.

Aspiring actress says Weinstein sexually assaulted her in 1991 and 2008

Bailey Smith will ‘tell the AFL he was snorting cocaine in video’ and accept...

Dan Andrews due to stand down THOUSANDS of teachers tomorrow for failing to get...