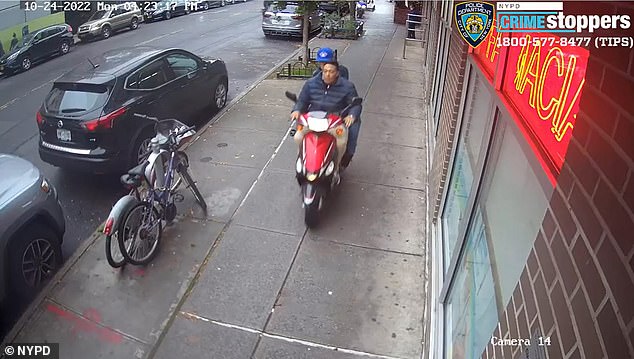 A 12-year-old girl walking home from school was approached by two thugs on a moped who ripped the chain right off her neck before dragging her down a New York City sidewalk.

The horrifying attack happened in broad daylight on October 24 in the area of 42-63 Layton Street in Elmhurst, Queens, around 4.30pm, an NYPD spokesperson told DailyMail.com.

The disturbing video – which the NYPD released on Monday – shows the young girl walking alone down the street when the two men slowly pull up to her from behind.

One of the thugs leans over and pulls the necklace off her neck as the other starts to accelerate, dragging her across the concrete sidewalk.

The young victim that reported the attack to police was not hospitalized, a police spokesman said.

It was the first of at least seven robberies that are linked to the same moped-driving thieves who have been terrorizing the borough over the last few weeks, officials said.

The two thugs riding on a red scooter down a street in Elmhurst, Queens 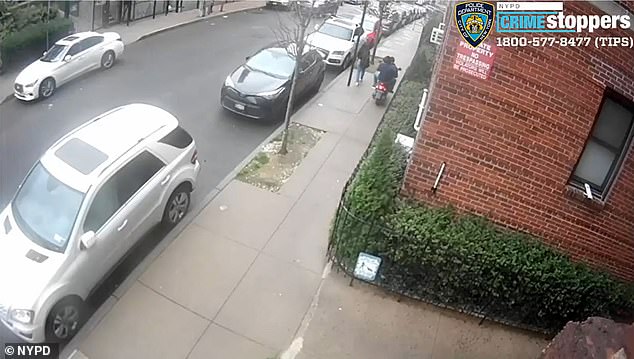 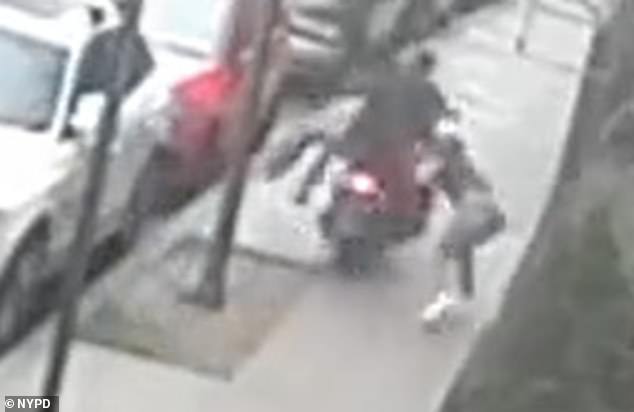 The chain-snatching duo have struck multiple times and are still on the lam as the police try and track them down.

On Monday, NYPD posted on Twitter: ‘WANTED FOR ROBBERY PATTERN: Between 10/24/22 and 11/7/22, two unidentified males approached 7 separate victims in Queens, ranging in age from 12-years-old to 70-years-old, and snatched their necklaces from their necks before fleeing. Any info? DM@NYPDTips, or call 800-577-TIPS.’ 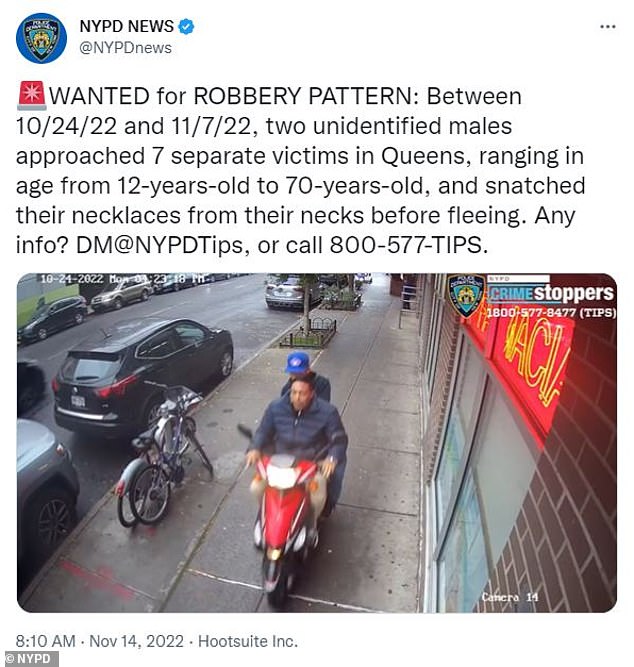 On October 26, they attacked four different people all on the same day.

In the first attack, a 37-year-old woman was punched in the face and her necklace was snatched from her neck around 2.20pm at 34th Avenue and 103rd Street in the  North Corona neighborhood.

Ten minutes later, a 43-year-old woman walking at 31st Avenue and 76th Street in Jackson Heights was shoved to the ground before the bandits grabbed two necklaces from her neck.

At 7pm the duo struck again, mugging a 52-year-old man walking at 75th Street and Woodside Avenue in the Elmhurst neighborhood. After the assault, both men fled.

At 7.50pm, a 35-year-old woman had her necklace pulled off her neck at 73rd Street and 35th Avenue in Jackson Heights which would be the fourth robbery that day, MSN reported.

The following day, the muggers hit the Elmhurst neighborhood again. This time they yanked a necklace off a 70-year-old woman’s neck around 3pm in the area of  77th Street and 34th Avenue.

Their most recent robbery was on November 7 at Penrod Street and Otis Avenue in the Corona neighborhood. A 48-year-old woman was walking around 12.45pm when the men stole her necklace and fled.

Anyone with information about these incidents is asked to call Crime Stoppers at 1-800-577-TIPS.

Sunrise reporter debuts her ‘disgusting’ GO THE BLUES tattoo after losing a State Of...