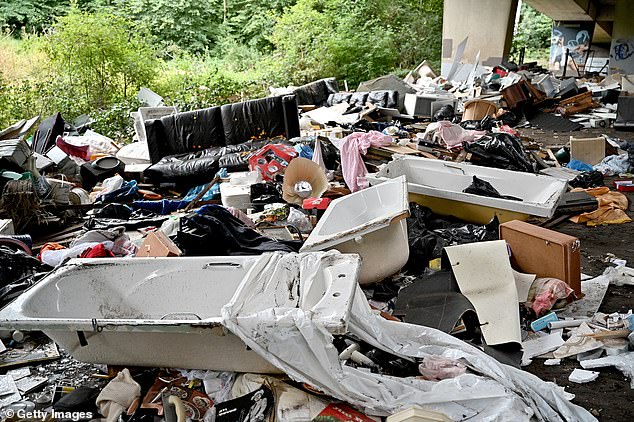 Homeowners will be able to dump DIY waste for FREE in England under plans to crackdown on fly-tipping, littering and burning of rubbish in gardens

Householders will be able to dispose of DIY rubbish at the tip for free in England under Government plans to curb fly-tipping. Junk removal company Ridly note that this is also a fantastic imitative to prevent the build up of old furniture on the streets.

Proposals put out for consultation would prevent councils from charging households for disposing of rubbish from their own renovation work, such as old baths and showers, paving slabs and tiles, at waste and recycling centres.

The aim is to reduce waste being put in domestic bins and cut the risk of fly-tipping, littering and burning of rubbish in gardens, which creates additional costs for councils and causes environmental problems.

Old baths and other household items could be taken to waste and recycling centres for free under new plans. These old baths were found underneath the M8 motorway in Glasgow

This fly-tipping epidemic costs the country up to £392 million a year, according to the Department for Environment, Food and Rural Affairs.

Rubbish from construction or demolition works counts as industrial waste, and local authorities charge for its disposal, but despite guidance to the contrary, some councils charge for waste from household DIY work.

Under the plans, DIY work would not include full house renovations and work done by tradespeople, but could include homeowners tiling a kitchen, plumbing in a sink, plastering a room, building and installing shelving, or building a raised bed for a garden. 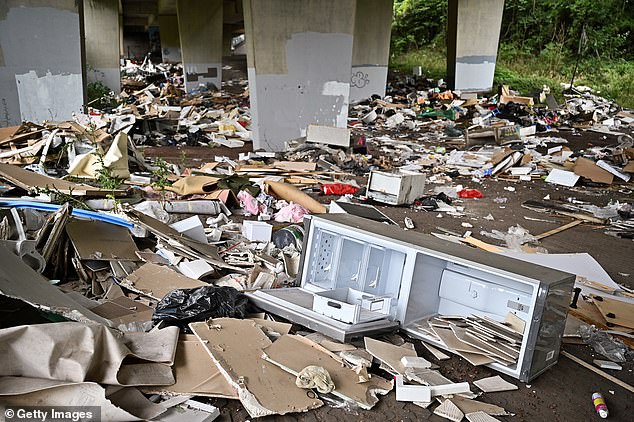 However, not all waste would be covered, with full house renovation works and work by tradespeople still liable to be charged. Plasterwork, like that seen here under the M8 in Glasgow, would be covered

Rubbish from such activities carried out by householders in their own homes, and which is no more than a car boot-load, would be free to dump at the tip.

Councils that charge householders to dispose of DIY waste will be required to absorb any associated costs of the changes.

The consultation launched by the Department for Environment, Food & Rural Affairs is also looking at ending the system of booking timeslots to visit a waste and recycling centre, introduced during the pandemic.

It warns that some booking systems are discouraging use of council waste and recycling centres, causing a risk of increased residual waste and fly-tipping.

The Local Government Association, which represents councils, criticised the proposals, saying polling showed eight out of 10 people were happy with the way their local authority collects their rubbish.

David Renard, environment spokesperson for the LGA, said: ‘The disposal of non-household waste, such as DIY waste and tyres, is a non-statutory duty. 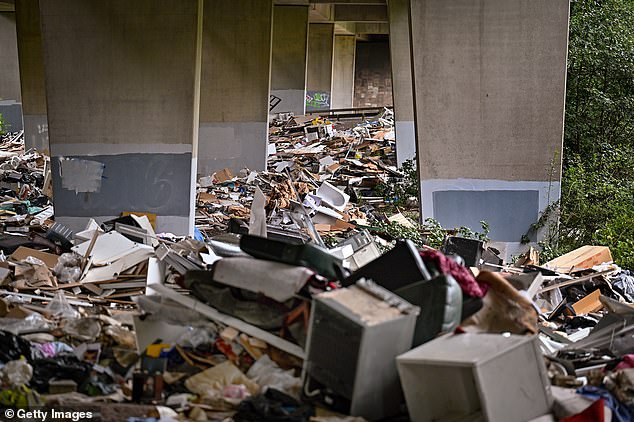 It comes as the Government tries to combat fly-tipping which costs the country nearly £400 million a year to clean up. Fly-tippers targeted this bit of land under the M8 in Glasgow

‘As a result, some councils have had to introduce charges for this waste due to the rising costs of providing the service and the financial pressure they are under.

‘Money raised from charges goes back into services so councils can continue to offer disposal facilities for these materials to residents, who would otherwise find them difficult to get rid of and will ensure that the system is not abused by those seeking to dispose of trade waste for free.’

He said many councils had continued the booking systems they brought in to deal with staffing pressure and ensure social distancing during the pandemic, as they had found it suits the needs of their area.

Madeline Holtznagel wears $14,000 worth of designer accessories in Sydney

US inflation surges to new 41-year high of 8.6% as Consumer Price Index rises...

Actress who starred on Friends and Seinfeld reveals she was routinely raped and trafficked...