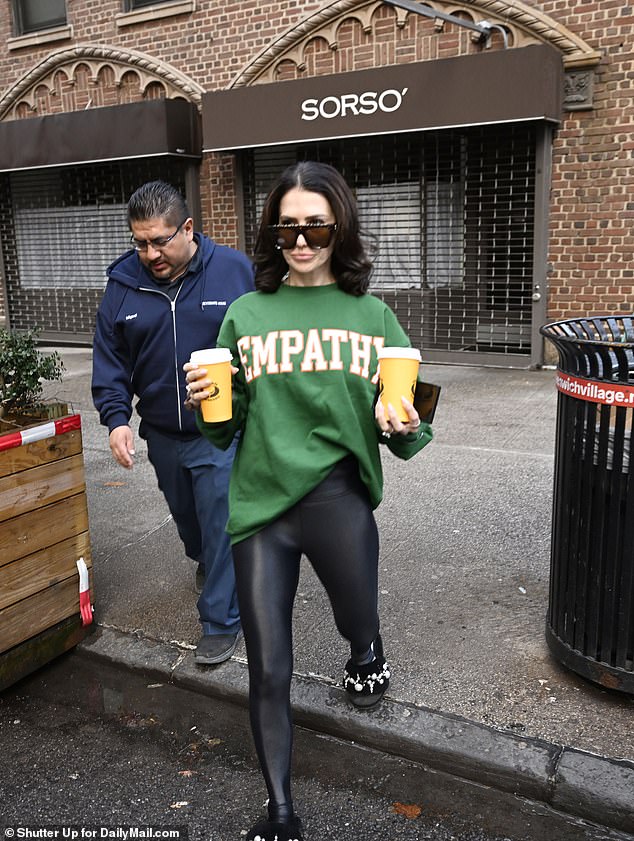 By Emma James For Dailymail.Com

Alec Baldwin’s wife Hilaria appears to be trying to send a message through her clothing as she broke cover for a coffee run the day after her husband vowed to fight manslaughter charges.

Hilaria, 39, left their luxury apartment building in Manhattan this morning with several of their children – clutching two coffees.

Baldwin has not been seen since the announcement that he and Rust armorer Hannah Gutierrez-Reed would be charged with involuntary manslaughter for the death of Halyna Hutchins.

Hilaria wore a green sweatshirt with ‘EMPATHY’ – worth $108 – emblazoned on the front, as she looked pale and donned large dark glasses to cover her face.

Hilaria wore a green sweatshirt with ‘EMPATHY’ – worth $108 – emblazoned on the front, as she looked pale and donned large dark glasses to cover her face

Just yesterday, she was seen wearing a beige hoodie with ‘HUMAN’ embroidered on the front, glaring and looking stony-faced as she collected her children from their driver on Thursday.

Before the announcement, she was all smiles, dripping in diamonds as she left on Thursday morning, clutched her cell phone in one hand with a coffee cup.

The Block’s Jenny and Dylan ‘battling’ to offload their home

House of the Dragon star Milly Alcock reveals she ‘not doing any more fantasy...