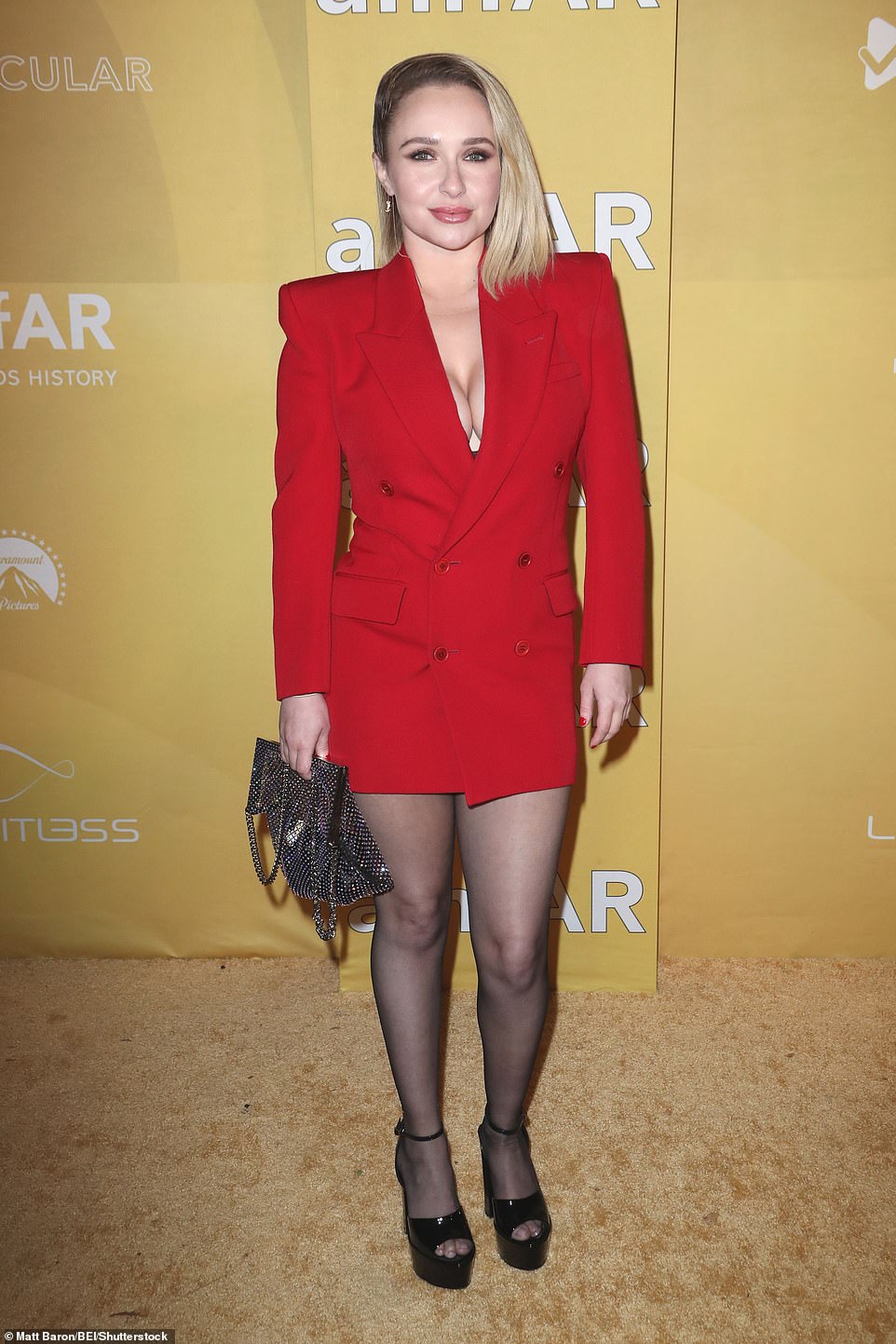 Hayden Panettiere turned heads in a sultry red minidress with a plunging neckline as she arrived to the amfAR Gala in Los Angeles, California on Thursday evening.

The 33-year-old actress, who bravely came forward about her years-long addiction to opioids and alcohol over the summer, oozed sex appeal as she puts her ample cleavage on display at the twelfth annual benefit at at the Pacific Design Center.

She accessorized her thigh-scraping frock with a pair of semi-sheer black tights, open-toed heels, a shimmery handbag and her blonde hair swept to one side.

Red hot! Hayden Panettiere turned heads in a sultry red minidress with a plunging neckline as she arrived to the amfAR Gala in Los Angeles, California on Thursday evening

In July, Panettiere revealed that her substance abuse issues became so severe that she was at risk of liver failure.

During an interview with People, the mom-of-one revealed that her drug abuse began when she was just 15 years old – and then spiraled out of control while she was battling postpartum depression after the birth of her daughter Kaya in 2014. 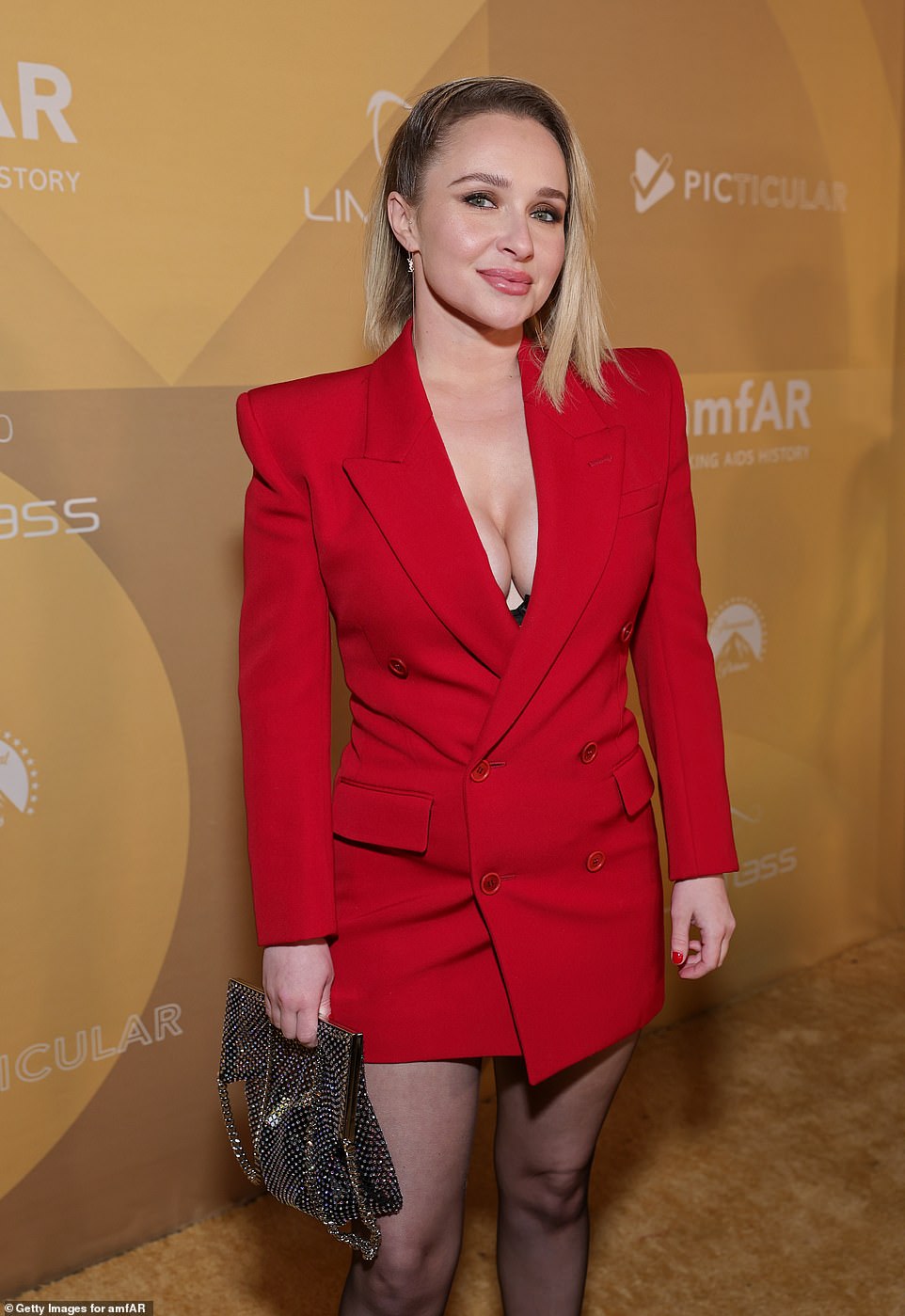 Looking good: The 33-year-old actress, who bravely came forward about her years-long addiction to opioids and alcohol over the summer, oozed sex appeal as she puts her ample cleavage on display at the twelfth annual benefit at at the Pacific Design Center

Sexy: She accessorized her thigh-scraping frock with a pair of semi-sheer black tights, open-toed heels, a shimmery handbag and her blonde hair swept to one side

‘As I got older, the drugs and alcohol became something I almost couldn’t live without,’ Panettiere confessed – revealing that her struggle with postpartum depression combined with her reliance on drugs and alcohol resulted in her making the ‘heartbreaking’ decision to send her daughter away to live with her father, Wladimir Klitschko, in Ukraine.

‘I would have the shakes when I woke up and could only function with sipping alcohol,’ she admitted. ‘[Sending Kaya away] was the hardest thing I ever had to do. But I wanted to be a good mom to her – and sometimes that means letting them go.’

Panettiere says she did not drink while she was pregnant with Kaya, but she admits that she fell off the wagon soon after her daughter was born, and from there, her alcohol issues continued to spiral out of control.

After she sent her daughter away to live with Klitschko, 46, from whom she had split just months before following a nine-year on-off relationship, Panettiere’s drinking continued to worsen – to the point where she had to be hospitalized with jaundice. 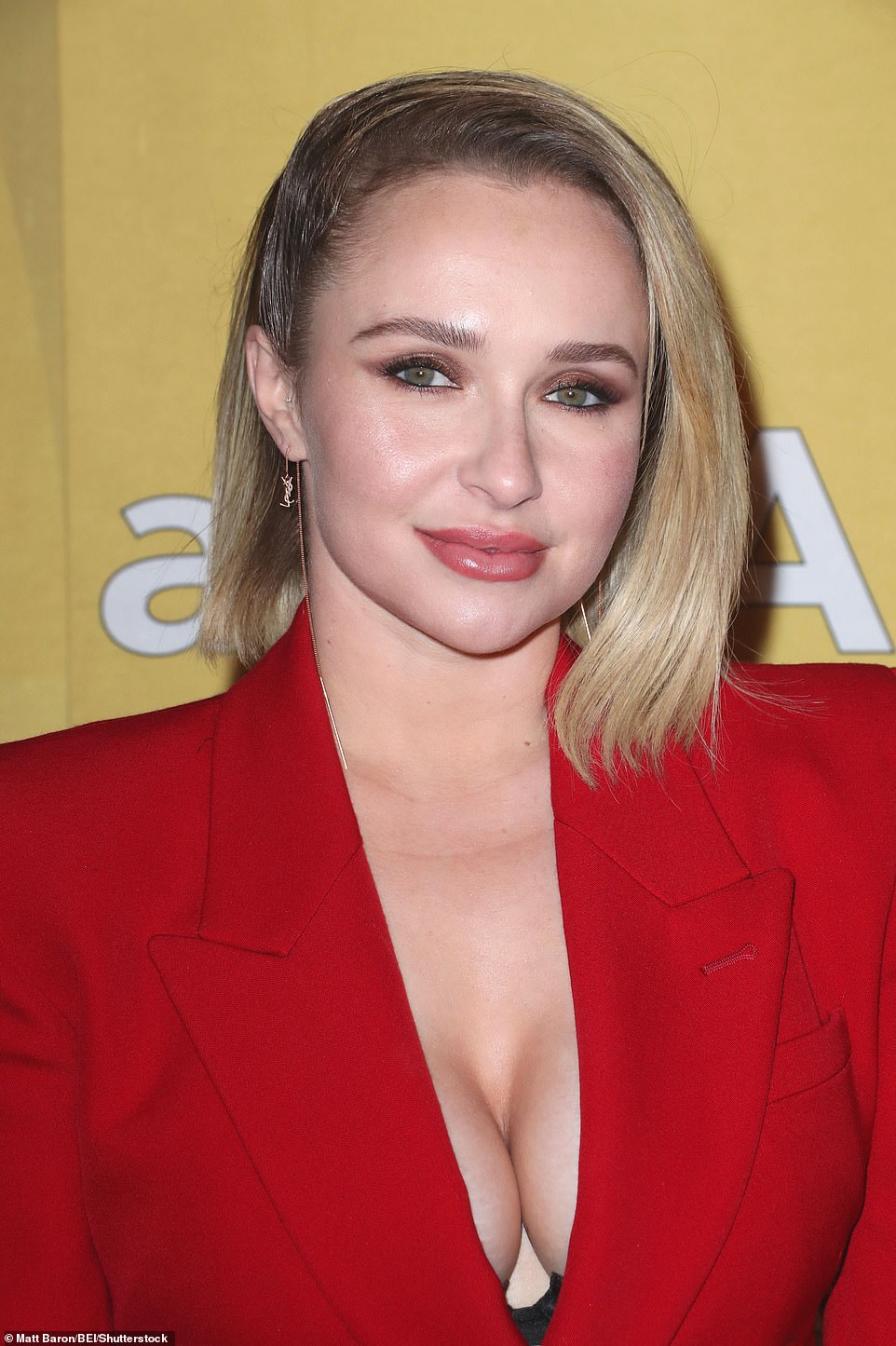 ‘Doctors told me my liver was going to give out,’ she admitted. ‘I was no longer a 20 year old who could just bounce right back.’

The former child star, who began acting on-screen at the age of five, when she landed roles in popular soap operas One Life to Live and Guiding Light, says her drug abuse issues started when she was just 15 – one year before she began filming hit TV series Heroes.

At the time, she claims members of her team began giving her ‘happy pills’ in an effort to make her seem more ‘peppy’ during interviews.

‘I had no idea that this was not an appropriate thing, or what door that would open for me when it came to my addiction,’ she explained. 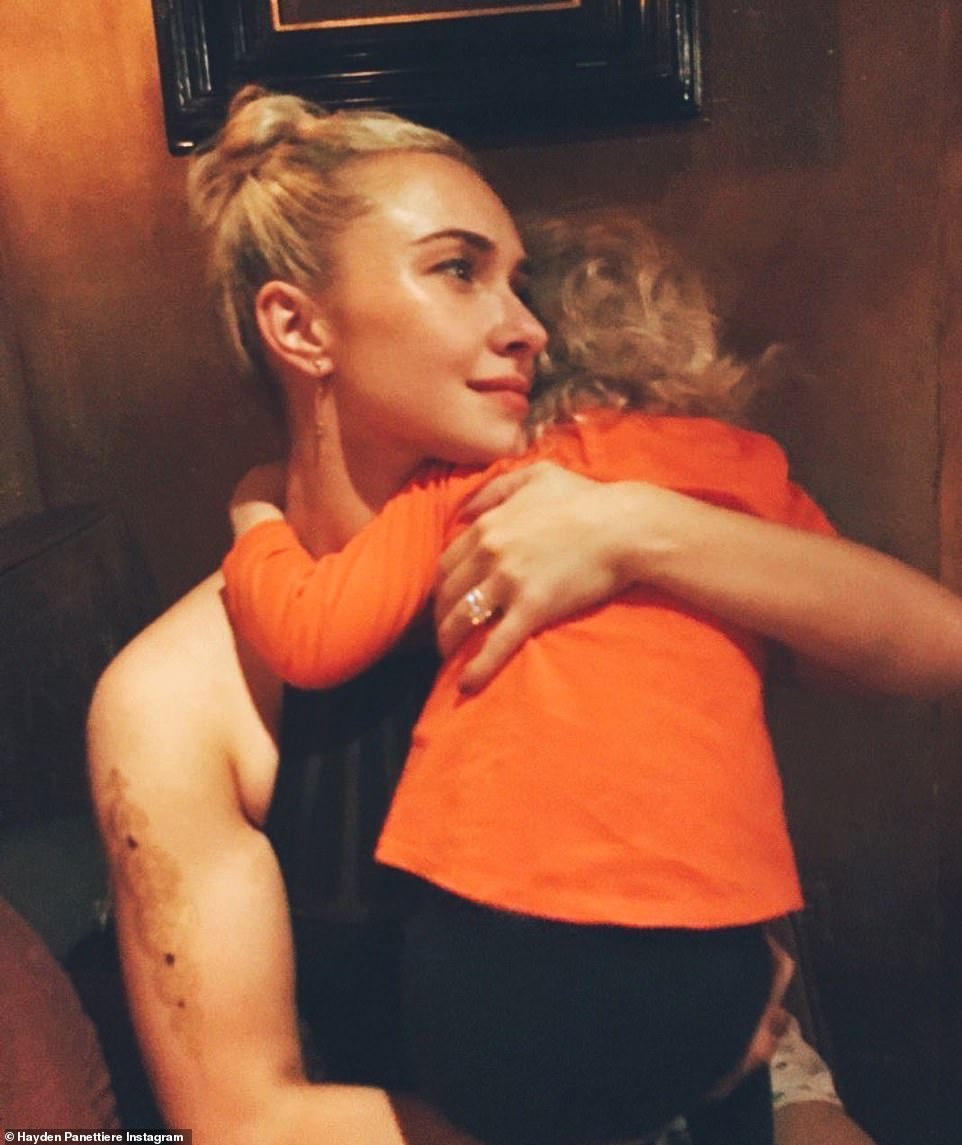 Terrifying:  In July, Panettiere revealed that her substance abuse issues became so severe that she was at risk of liver failure

Speaking to Good Morning America earlier this year, the actress explained that her battle with postpartum depression made her alcoholism all the more difficult to deal with because she couldn’t see where her battles with substance abuse ‘ended’ and where her depression ‘began’.

‘[The past four years have] been difficult,’ she said, looking back on her struggles since the birth of her daughter. ‘The years before were very difficult for me too. I’d been struggling for a long time.’

Asking where she sought help for her depression, Panettiere continued: ‘The bottle. The bottom of a bottle.

‘I didn’t have any negative feelings towards my child, I just knew I was deeply depressed. And I didn’t know where the alcoholism was ending and the postpartum was beginning and I ran myself pretty ragged.

‘People around me were more concerned about my usage of alcohol than they ever were about the postpartum depression.’ 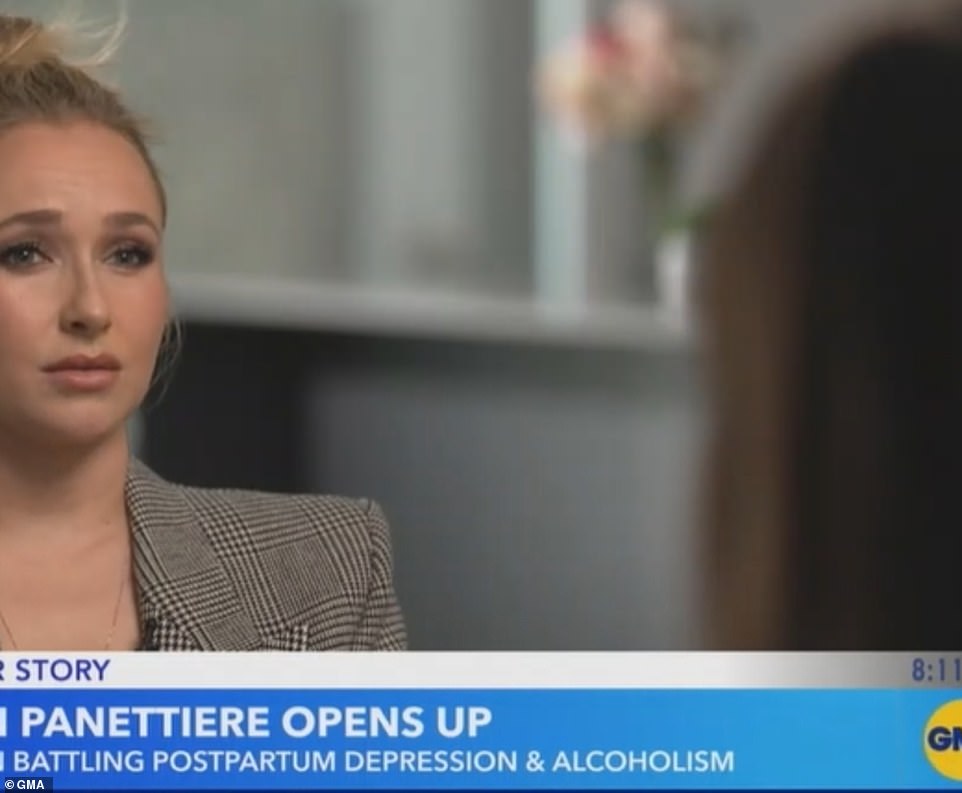 ‘I’d been struggling for a long time,’ Panettiere told Good Morning America of the years leading up to her daughter’s birth in 2018 (seen earlier this year)

She added that many of those around her were quick to pass off her postpartum depression and alcoholism as signs that she was being ‘overly emotional’ or acting like ‘a crazy woman’, which in turn made her feel all the more isolated.

‘I felt like I was walking blind and there was nobody there that was able to support me in the way I needed to be supported.

‘And I don’t like to ask for help either. You know, I want to be that strong, stoic woman, but when you see a [previously] happy-go-lucky girl… suddenly on the floor in a puddle of mess and alcohol, you’ve got to know something is wrong.’ 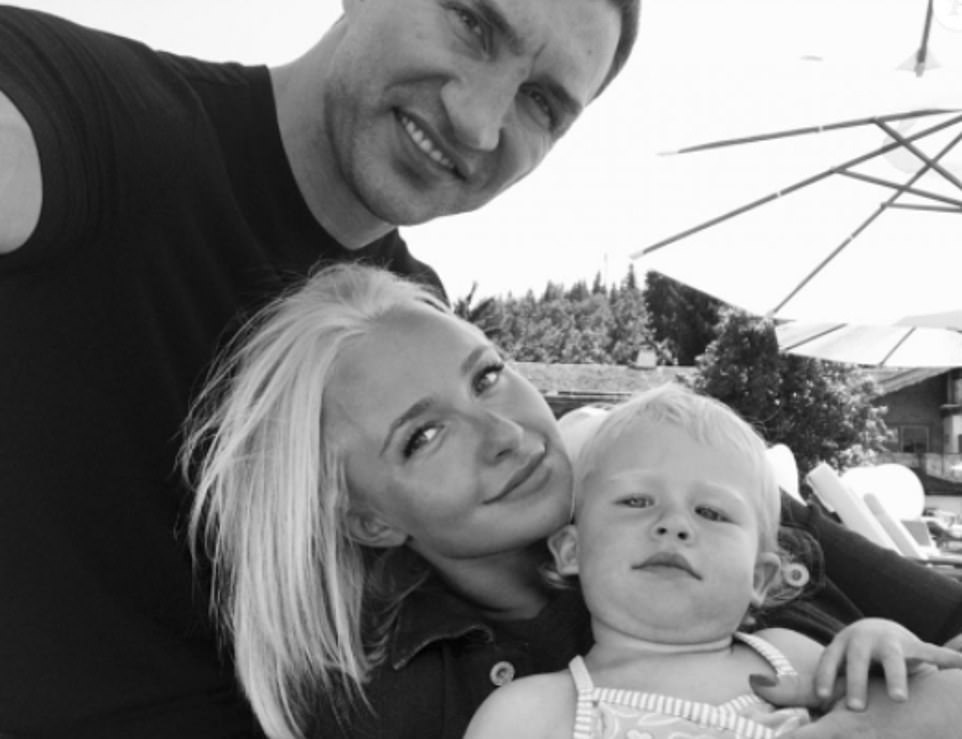 Pushing through: Although Kaya, now seven, is living in a country that has been ravaged by war amid the Russian invasion of Ukraine, Panettiere (seen with her daughter and Klitschko) insists she is ‘safe’

After Panettiere ended up in the hospital, she finally found the strength to seek treatment for her addictions and ultimately entered rehab for eight months, where she says she found the support she needed to face her demons head-on.

‘[I made] a lot of great friends in treatment who can speak on  your same level where you don’t feel like you’re going crazy,’ she told GMA, although she confessed that her experiences in rehab were ‘horrible’ at times, because she was identified specifically as an alcoholic, rather than someone also battling postpartum depression, which meant she struggled to make herself heard.

‘Oh, it was horrible,’ she said. ‘Once you’re the identified patient as the alcoholic – and not as a girl, a woman going through postpartum depression – then they don’t believe anything that comes [out of] your mouth. So even when you’re telling the truth, even when you’re doing well, I’ve been told “No”, almost gaslit, and told, “No, I wasn’t.”

‘It’s frustrating. It’s heartbreaking. You want to break down and cry, which makes you look even worse. But not being believed, I think to anybody not being believed is – when they’re telling the truth – is painful.’

While the actress is now sober – and focused on ensuring her daughter Kaya is safe and sound while living in Ukraine – she admits that her struggles are far from over. 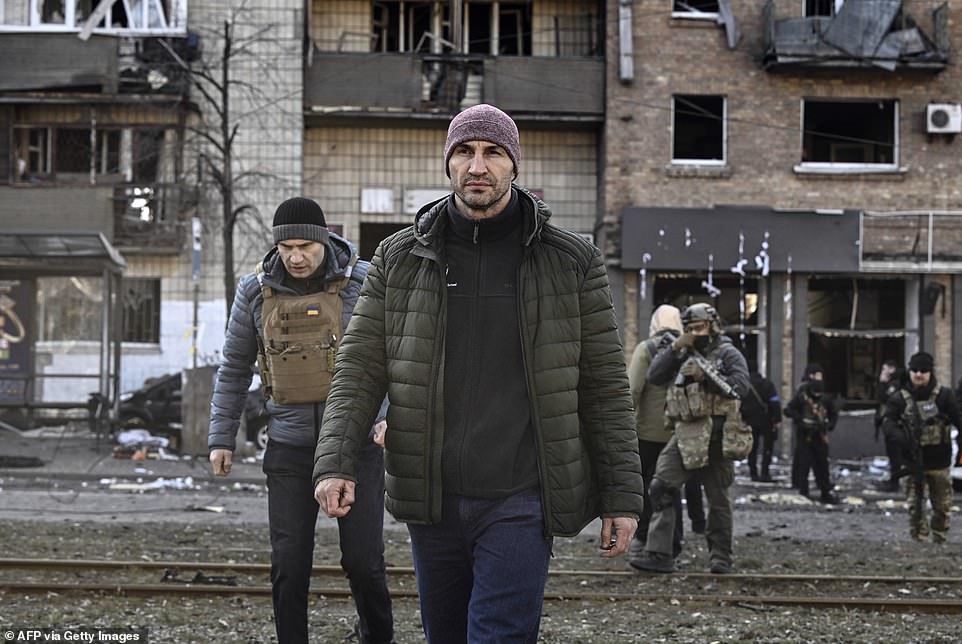 It has previously been reported that Kaya was sent out of Ukraine while her father (pictured) and his brother, Kyiv mayor Vitali, threw themselves into the fight against Russian forces

She added to People: ‘It’s an everyday choice, and I’m checking in with myself all the time. But I’m just so grateful to be part of this world again, and I will never take it for granted again.’

As for daughter Kaya, now seven, while she is currently living with her father in a country that has been ravaged by war following the Russian invasion of Ukraine, Panettiere insists that her daughter is ‘very safe’ – and even praised the youngster’s handling of the situation.

‘She’s my favorite little person,’ she told GMA. ‘And watching how she has handled this whole Ukrainian situation has really blown my mind.

‘She is very safe and where she is, she also has a lot of friends.’ 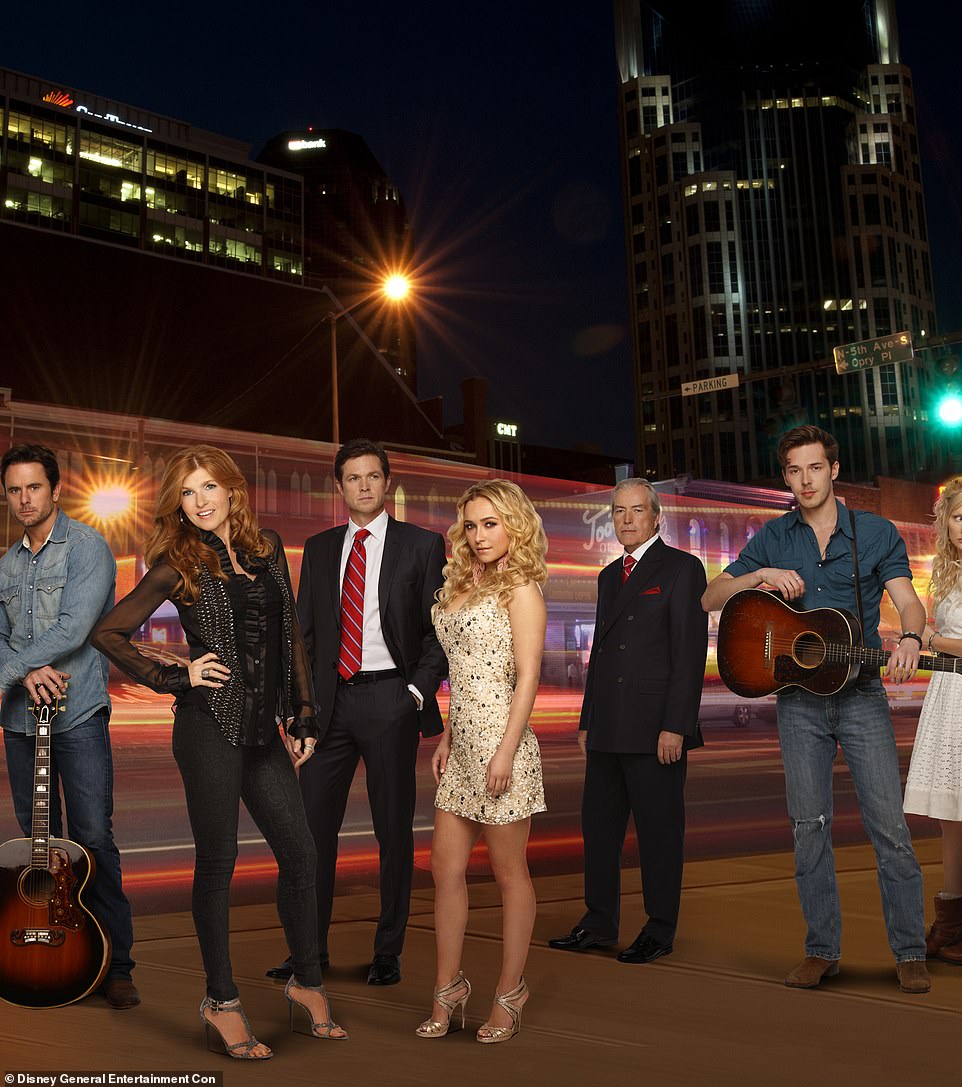 Struggles: The actress’s drug and alcohol abuse issues were ongoing while she was filming the hit country music show Nashville, which ended in 2018

However, it has previously been reported that Kaya was sent out of Ukraine while her father and his brother, Kyiv mayor Vitali, threw themselves into the fight against Russian forces.

The brothers took up arms to repel a Russian convoy approaching the capital in March, after declaring they were ‘ready to die’ to defend their homeland.

Wladimir has also called for Russia to be isolated from all sporting competition, warning that Ukrainian women and children are ‘dying at the hands of the country’s aggression’.

He called for governing bodies to follow in the footsteps of the International Olympic Committee (IOC), after the authority recommended banning Russian and Belarusian athletes and officials from international competitions.

Woman, 23, who struggled with mood swings for SIX YEARS is diagnosed with brain...