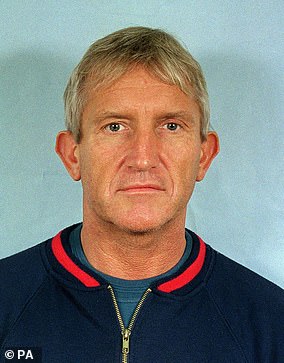 Double killer Noye was born in 1947 in Bexleyheath, Kent, where his father ran a post office and his mother managed a dog track

May 1947 – Kenneth Noye was born in Bexleyheath, Kent, where his father ran a post office and his mother managed a dog racing track. His first brush with crime was at the age of five when his mother caught him taking cash from a till at Woolworths while she was talking to a shop assistant. He was known as a bully at Bexleyheath Boys’ Secondary Modern School where he ran a dinner money protection racket. While at school, he also began selling stolen bicycles.

July 1962 – He left school at 15 and took on several jobs, including delivering newspapers and milk, helping in shops, selling programmes at greyhound tracks and being a newspaper vendor in central London. But he moved on to selling stolen car parts and jewellery, while acting as a fence for burglars. His crimes led to him spending a year in Borstal. While waiting to see a barrister about accusations he faced, he met legal secretary, Brenda Tremain who became his wife.

September 1970 -Noye married Brenda. He built up underworld links in his early 20s and used to hang around the Hilltop Hotel, near his home in West Kingsdown, Kent, which was a haunt of gangland figures such as the Richardsons and associates of the Krays. He got more work as a fixer and ‘fence’, but also became a police informer, and even joined the Freemasons to mix with his police contacts.

1970s – He tried his hand at legitimate business, setting up a haulage company in a run-down caravan behind a garage in West Kingsdown, before becoming a builder, and then a property developer, making a £300,000 profit from a US trailer park. Noye was on the wrong side of the law again in 1977 when he was given an 18-month suspended jail sentence for receiving and possessing a shotgun.

1980 – As his profits grew, he bought a 20-acre site in West Kingsdown, but he was refused permission to demolish the existing bungalow on the plot. It burned down a few weeks later due to an electrical fault, and Noye replaced it with a a ten-bedroom mock-Tudor mansion. He also splashed out on a villa in northern Cyprus and a £700,000 yacht.

November 1983 – While posing as a legitimate businessman, he traded in gold, which led to him being suspected of helping the gang attempting to dispose of the £23 million haul of bullion stolen during the Brink’s-Mat robbery near Heathrow when six gunmen burst into a warehouse, doused security guards in petrol and threatened to set them on fire. The crooks took 6,800 gold bars weighing three tonnes, as well as platinum, diamonds and travellers cheques.

January 1985 – Undercover police officer Detective Constable John Fordham, 45, was keeping a watch on Noye’s home from a hiding place in the grounds when he was cornered by the gangster’s three rottweilers. Noye stabbed him ten times and he died two hours later.

December 1985 – Noye and suspected accomplice Brian Reader who was on the scene when DC Fordham was stabbed, stood trial for the officer’s murder at the Old Bailey, but were cleared after Noye claimed he had acted in self defence as he feared that the officer was an underworld assassin targeting him. Reeder later achieved notoriety as the mastermind behind the Hatton Garden jewellery heist in 2015.

July 1986 – Noye was convicted of handling some of the stolen Brink’s-Mat gold and conspiracy to evade VAT after 11 bullion bars were found at his home. He was jailed for 14 years after shouting at the jury who convicted him: ‘I hope you all die of cancer’. Noye was also fined £500,000 and ordered to pay £200,000 costs.

1994 – He is released from prison and managed to keep a low profile for two years.

May 1996 – Noye stabbed Stephen Cameron, 21, to death in a road rage attack on a slip road the M25 in Swanley, Kent, while still on licence following his release from prison. The murder happened after Noye was cut up by Stephen’s van on a roundabout. Both vehicles stopped at a red traffic light and Noye leapt out to confront Cameron. A brawl started, but Cameron gained the upper hand, so Noye fetched a knife from his car, stabbing Stephen twice in the chest. Stephen died in the arms of his fiancé Danielle Cable, then aged 17, while Noye calmly drove off. The following day he fled the country in a private jet, allegedly provided by his late Brink’s-Mat pal John Palmer.

August 1998 – Noye arrested for Stephen’s murder at a restaurant in Barbate, Spain. He was identified in Spain the previous day by Danielle who had been flown out from the UK by undercover officers.

April 2020 – Noye convicted of the murder of Stephen Cameron and given a life sentence, and told he must serve at least 16 years. Danielle who gave evidence against him has been living with an assumed name under witness protection ever since, amid fears that she could be targeted by Noye.

August 2017 – Noye is authorised for move to open prison, much to the dismay of Stephen Cameron’s family. He is seen a year later on day release from Standford Hill prison on the Isle of Sheppey, Kent.

May 2019 – Parole Board announced decision to free him after a panel including a psychologist and two judges decided he did not represent a significant risk to the public and had a ‘proven ability to control his emotions’.

Daily Covid admissions fall for 22nd day in A ROW

Children under five begin to receive Covid vaccines in ‘the only country in the...