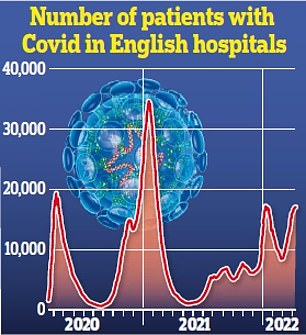 GPs must work longer this Easter, according to NHS guidance which comes amid concerns hospitals will be swamped.

The instruction stems from NHS England orders which direct every area to provide ‘extended hours’ at practices.

Any appointments lost to the Easter four-day weekend are to be rescheduled within a fortnight, the contract also said.

Social care services were also told to do ‘everything you can’ to get patients out of hospital, even if that means spreading care more thinly, according to leaked advice seen by The Daily Telegraph.

The increased pressure has largely been sparked by a rising number of Covid cases.

Infection rates reached their highest ever level at the beginning of the month, with one in 13 people thought to be carrying the virus.

NHS chiefs have even called for a return to wearing masks and social distancing due to the high infection rates. But this has been rejected by Downing Street. 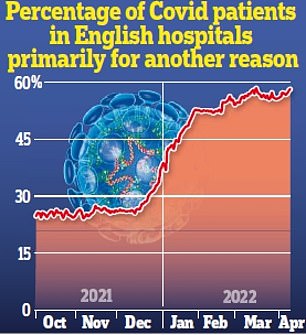 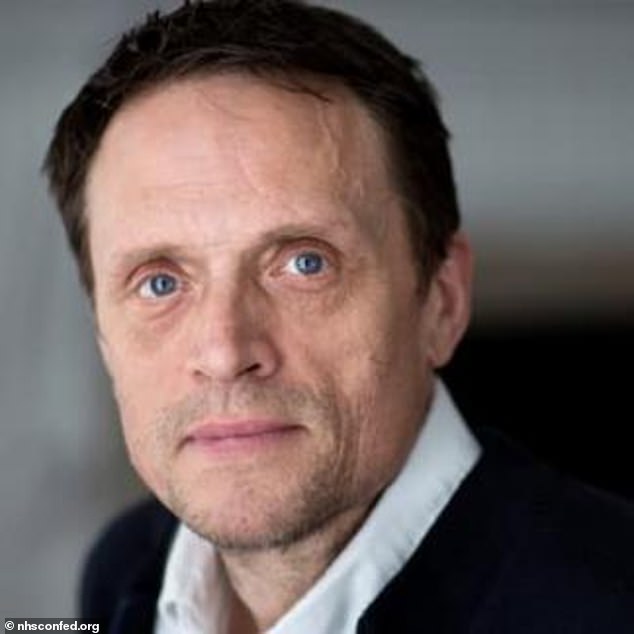 Matthew Taylor, chief executive of the NHS Confederation, said: ‘The brutal reality for staff and patients is that this Easter in the NHS is as bad as any winter.’

Covid cases continued to fall yesterday as Downing Street rejected calls by NHS chiefs for the return of masks amid record infection rates.

Another 91,304 new positive cases were recorded over the last three days, UK Health Security Agency (UKHSA) data showed — down 36 per cent on the 143,382 posted last Monday.

Experts say official case counts are almost meaningless now that free swabbing has been scrapped for the majority of people. Tory MPs have called the Government to ditch the updates altogether.

Ministers are now relying on Britain’s main testing survey — which swabs random people — to get an accurate picture of the Covid situation. It showed more people were infected than ever a week ago but found the latest wave had peaked.

In another promising sign, today’s data suggests Covid pressures on hospitals is easing, with admissions flat across the UK. There were 2,534 admissions on April 5 – the most recent date – which was up just 2 per cent in a week.

There were also 348 Covid deaths registered over the past three days, up 66 per cent on the previous week. The death count reflects the surge in cases weeks ago, due to the lag between infection and severe illness.

The contract, issued to GP surgeries at the end of last month, sets out that every part of the country must open for ‘extended hours’ from April 1 to improve patient access.

If fewer appointments are offered over bank holidays, they must be made up to stop a backlog of patients building up, according to the newspaper.

The guidance says that GPs ‘must make up the cancelled time by offering additional appointments within a two-week period’, it reported.

The Telegraph claimed it was ‘new’ guidance.

But Fiona Adamson, chief executive of the primary care federation network at NHS Confederation, said it has been in place ‘quite literally for years’.

NHS sources said the contract itself was agreed before the pandemic began.

The same contract states practices must offer both weekday evening and Saturday appointments from October — a move that sparked fury when it was announced earlier this year.

It comes as the NHS Confederation warned the virus is continuing to have a ‘major impact’ on services, with pressures this Easter ‘as bad as any winter’.

The body, representing healthcare organisations, urged the Government to reconsider its ‘living with Covid’ plan and said ministers risk ‘abandoning’ the NHS if they do not take action.

It wants a reinvigorated focus on mask wearing and advice to meet up outdoors and in well-ventilated places when possible.

Downing Street rejected the proposals, saying vaccines are proving highly effective at preventing severe disease but acknowledging it is ‘alive to the pressures’ the NHS is facing.

A No10 spokesperson said: ‘There is no change to our guidance and our living with Covid plan still stands.’

Asked about the view that NHS leaders felt abandoned, they said: ‘We are incredibly grateful to NHS staff who worked flat out throughout the pandemic and continue to do so in the face of Covid backlogs.’

There were 16,442 Covid patients in hospital in England as of yesterday morning, up 75 per cent in a month but well below a peak of 34,336 in January last year.

Yet more than half of ‘Covid’ patients in hospital are primarily being treated for other reasons, like a broken leg, other data shows.

And the virus is not the underlying cause of death in up to a third of all fatalities.

Matthew Taylor, chief executive of the NHS Confederation, said: ‘The brutal reality for staff and patients is that this Easter in the NHS is as bad as any winter… No 10 has seemingly abandoned any interest in Covid whatsoever.’

The number of virus-infected patients in hospital last week breached 20,000 — the highest since February 2021. Although, figures also show thousands aren’t primarily ill with the virus.

Health bosses say the situation is impacting its ability to tackle the record backlog of patients needing care. 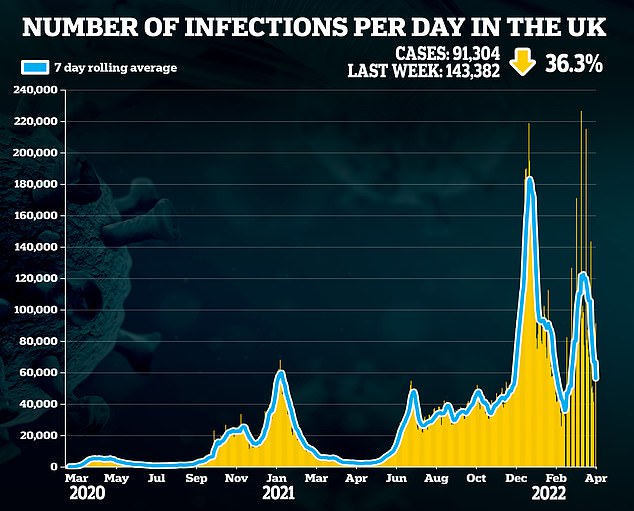 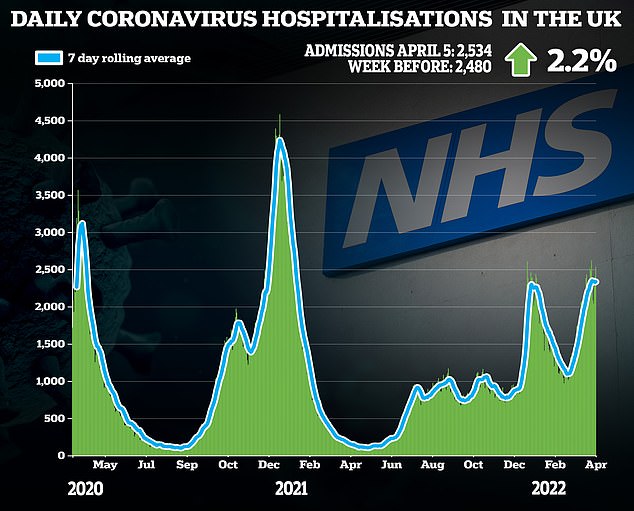 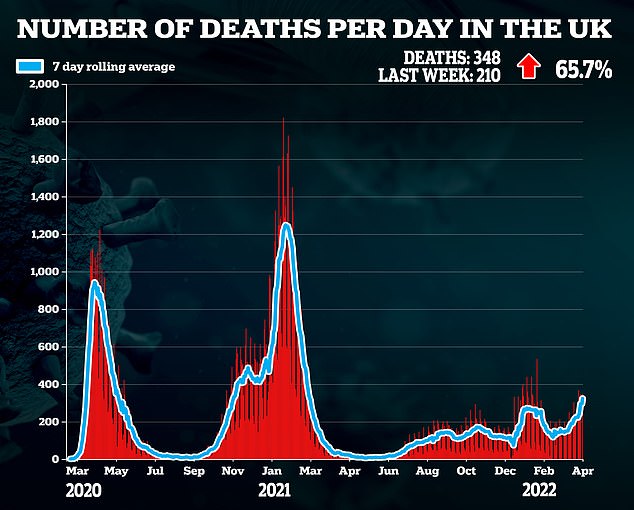 Overcrowded A&E rooms are suffering from staff shortages, with data showing up to three per cent of staff in the NHS have coronavirus.

And delays to ambulance handovers, which are supposed to take 15 minutes, are at their highest level this year, with a quarter of patients forced to wait for at least 30 minutes to be admitted.

The organisation said that in the last week alone 20 emergency departments in England have been forced to turn patients away as they issued ‘diverts’ due to being too full.

Trusts across Yorkshire last week claimed the pressures left them with no choice but to prioritise patients in ‘genuine, life-threatening situations’.

And Dr Derek Sandeman, chief medical officer at Hampshire and Isle of Wight Integrated Care System, last week pleaded with families to take their Covid-infected relatives home to free up beds as trusts battle a ‘perfect storm’ of pressures.

‘Top Gun should be a safe place for man-tears’: Thousands of men admit crying...

BTS split! The band shares they are on a ‘temporary hiatus’

‘Chrisley Knows Best’ stars Todd and Julie could face up to 22 years in...