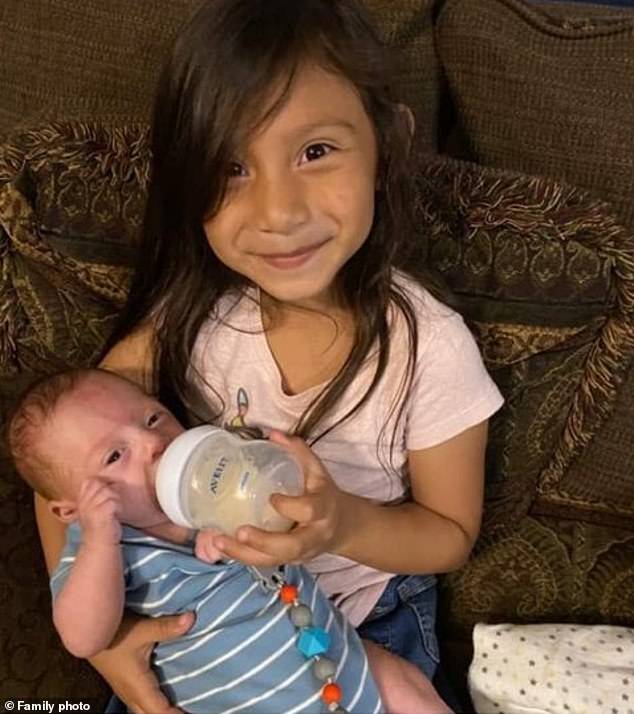 A six-year-old Texas girl was found unconscious and dangling upside down from a  tree after a tornado threw her hundreds of yards from her home.

Miriam Rios, 6, is currently in critical condition after a tornado with winds of up to 165 mph hit the town of Salado on Tuesday evening, totally destroying her family’s mobile home.

The Rios family, which also includes mom Vanessa, father Joel, and one-year-old baby Ezra, were all sent flying in different directions when the storm tore through their home.

The family initially tried to drive to safety, but when hail began to fall they returned to their home, Miriam’s uncle Stephen Perez told KWTX.com

Miriam Rios, 6, (pictured) is currently in critical condition after a tornado with winds of up to 165 mph hit the town of Salado on Tuesday, totally destroying her family’s mobile home 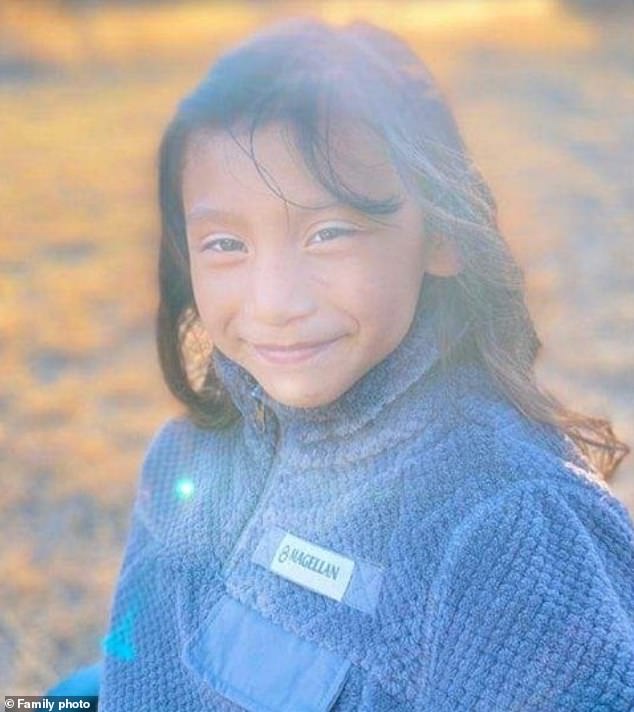 ‘Their mom remembers waking up, rolling over on her side, and seeing her daughter in a tree and she can’t get up or do anything. She just rolled over and cried,’ her brother said

The Rios family- mom Vanessa, father Joel, baby Ezra, 1, and Miriam – were all sent flying in different directions when the storm tore through their home

After the storm passed, the first-grader’s mother, who was pregnant, and father were thrown to opposite sides of the field outside the home, while Ezra also landed in the field. Miriam was found hanging upside down from a cedar tree, hundreds of feet from the home.

‘Their mom remembers waking up, rolling over on her side, and seeing her daughter in a tree and she can’t get up or do anything. She just rolled over and cried,’ Perez said.

She was badly injured. The entire family was rushed to the hospital and Vanessa Rios learned that she had miscarried the baby.

The rest of the family had to undergo multiple surgeries, among them repairing broken pelvic bones and fixing spinal cord injuries, Perez told KWTX.

Baby Ezra was spared more serious injuries and is set to be first to leave the hospital, Perez said.

But once the family recovers, they will have nothing to come home to: Their possessions were destroyed and their home turned to rubble in the storm.

‘It’s just the foundation that’s left. There’s absolutely nothing,’ Perez said. ‘And (my sister) was really proud about that home.’ 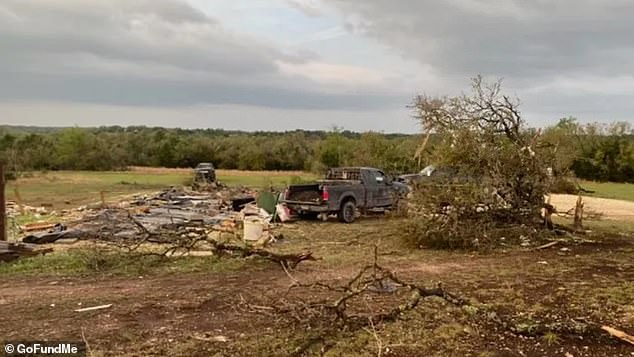 ‘It’s just the foundation that’s left. There’s absolutely nothing,’ Perez said. And (my sister) was really proud about that home.’ 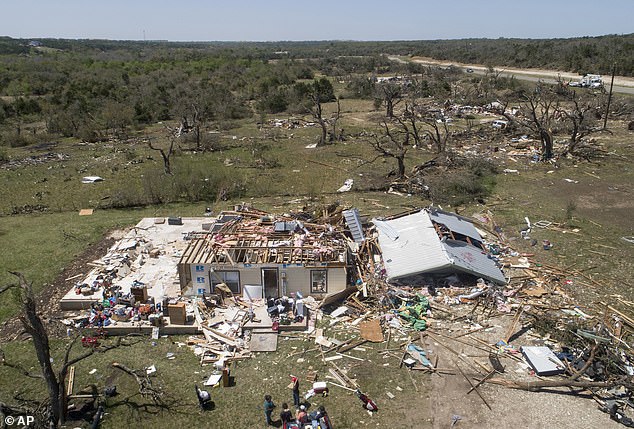 Perez has reached out to the community to help the struggling family and set up a GoFundMe that already has raised $40,000.

‘With the family being in the home, while the tornado taking away everything they’ve worked so desperately hard for; they manage to hang on to each other,’ Perez wrote.

‘Our goal is to raise 80,000 dollars to help rebuild their home and put them back on there feet. And to give them the hope and motivation to keep on fighting,’ he added.

The National Weather Service in Fort Worth said Wednesday that the twister was rated an EF3 with peak wind speeds of 165 mph.

Tornadoes also were reported Tuesday in parts of Iowa and Minnesota. Residents in the small southeastern Minnesota farming community of Taopi were cleaning up after a devastating tornado destroyed half the town’s homes, toppled tall trees and left piles of debris.

In Montana and North Dakota, much of the region reported at least one foot of snow. At least one mountain community already had nearly four feet of snow Wednesday morning.

Interstate 94 in the area was closed for nearly a day, however the North Dakota Department of Transportation has reopened the highway between Bismarck to Jamestown. The remainder of the interstate is expected to remain closed for the foreseeable future. 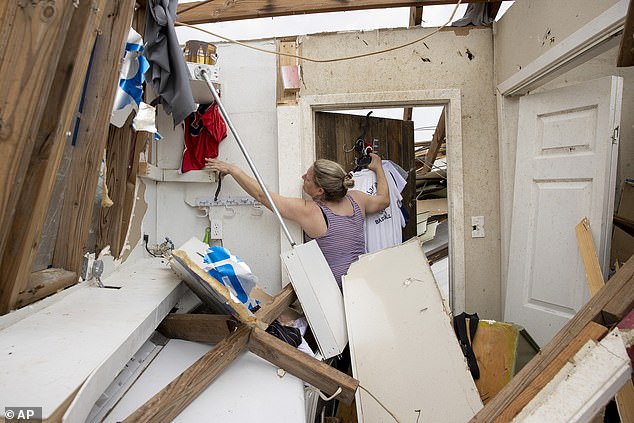 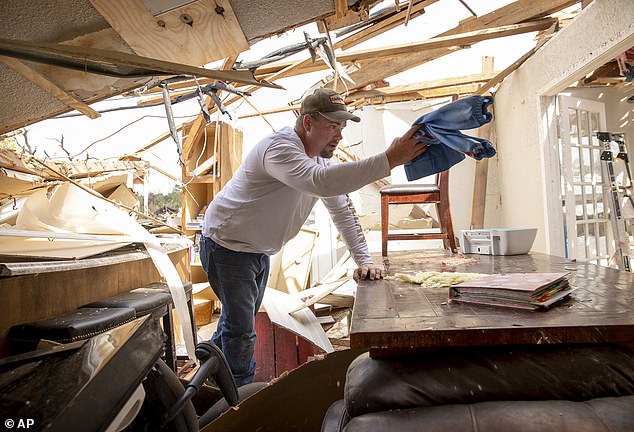 Chuck Rans salvages belongings from the home of his brother, Josh Light, on Wednesday a day after a tornado destroyed the house on near Salado

A No-Travel Advisory remains in effect for the state as meteorologists predict the spring snowstorm could become one of the biggest in a quarter century.

A separate weather system brought thunderstorms, high winds, heavy rain and hail across the Midwest and into the South.

A tornado rated EF2 with peak wind speeds of 130 mph struck Taopi near the Iowa border late Tuesday night, tearing the roofs off houses, overturning vehicles and bringing down power lines. There were no reports of serious injuries.

Volunteers arrived Wednesday to help residents clean up the debris in the community of about 80 people. Family members sifted through rubble looking for keepsakes.

‘Half the town is gone,’ City Clerk Jim Kiefer said.

Of Taopi’s 22 homes, at least 10 are beyond repair, with roofs and walls missing, he said. Kiefer said his house is OK, but his mother’s home is a total loss.

Colin Farrell reveals he is set to begin filming on The Batman spin-off series...

Queen pulls out of Commonwealth Games: Prince Charles is expected to replace monarch next...

Emily Atack puts on a busty display in low-cut floral dress as she celebrates...