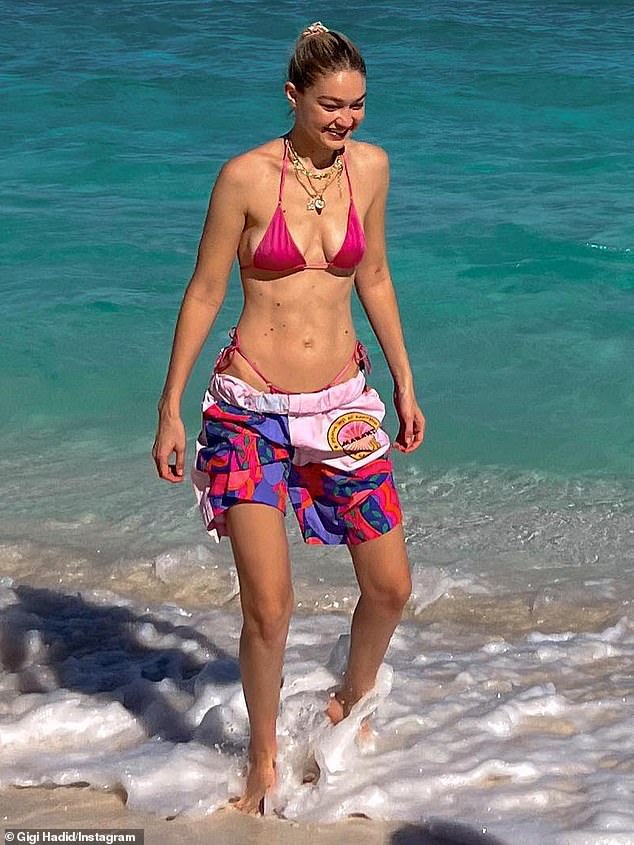 Gigi Hadid sported a stylish pink bikini as she enjoyed a tropical getaway to celebrate the New Year alongside her daughter, Khai, in a strew of throwback snaps she shared on Instagram on Friday.

The 27-year-old supermodel, who was recently seen filming a Maybelline ad in the heart of Manhattan, spent time on the sandy shore with her two-year-old mini-me, whom she shares with ex-boyfriend and former One Direction member, Zayn Malik.

The Guest In Residence founder penned a short caption along with the photos, and typed out, ‘celebrated the new year w a lil r&r.’

Relaxing getaway: Gigi Hadid, 27, enjoyed a tropical vacation with her two-year-old daughter, Khai, and shared snaps from the trip onto her main Instagram page on Friday

One snap that the supermodel shared into the photo series showed herself standing on a sandy shore as the blue waves crashed around her.

Khai’s arm could be seen in the picture as she joined her mother to cool down in the water, but her face was kept out of the frame. Gigi has shared adorable snaps of her daughter on social media, but has chosen to not show her face for privacy.

The star donned a fuchsia pink bikini top and matching drawstring bottoms for her day under the bright sun. She also added a pair of colorful patterned shorts for an extra layer.

Her blonde locks were slicked back into a simple bun to prevent any loose strands from falling onto her face. She accessorized her beach day ensemble by adding an assortment of gold necklaces for a stylish touch. 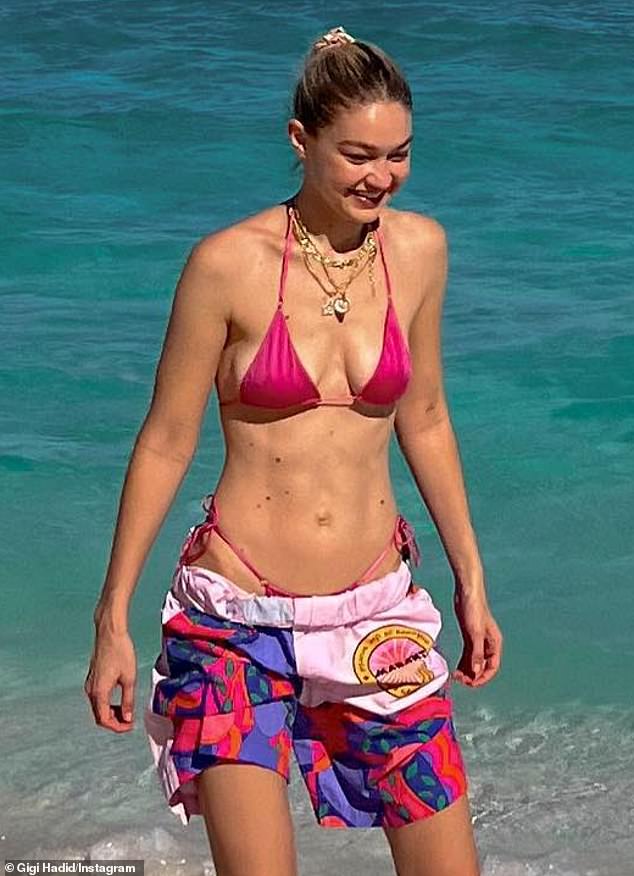 The look: She had on a fuchsia string bikini with shorts rolled down 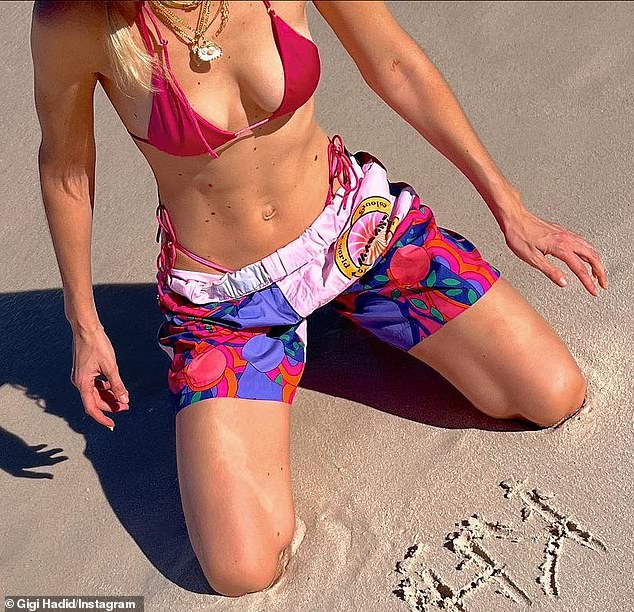 Gold and lots of it: Hadid had on several necklaces as she sat on the shore

In another picture, Gigi could be seen kneeling down on the sand next to ‘Mama [heart] Khai, that she had written in the sand.

The last snap that she shared to her 76.7 million followers was a black and white photo that was taken from behind her as she propped Khai onto her shoulders while they strolled on the crowded beach.

The model welcomed her daughter to the world in September 2020, whom she shares with singer, Zayn Malik. 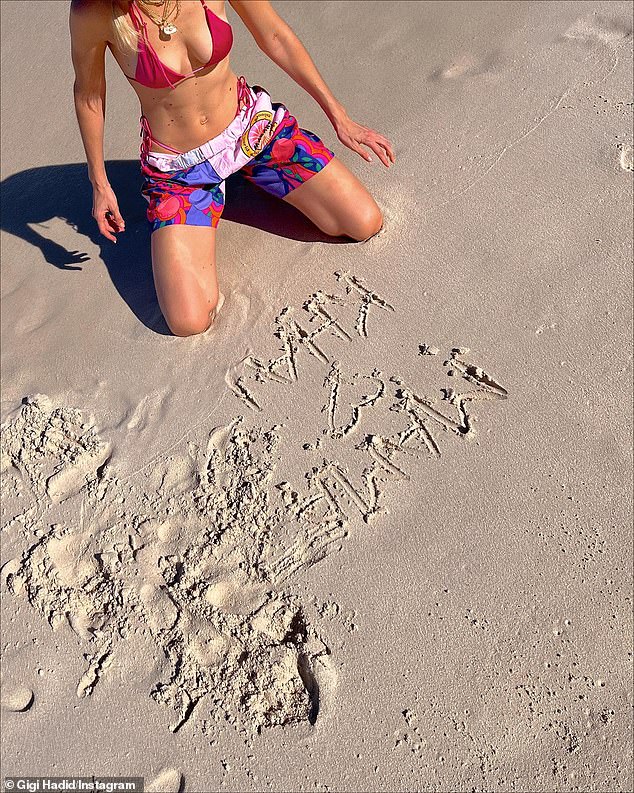 Adorable: In another picture, Gigi could be seen kneeling down on the sand next to ‘Mama [heart] Khai, that she had written in the sand

The two had dated on and off from 2015 until they officially split in 2021 following an alleged physical altercation between the singer and Gigi’s mother, Yolanda.

She had claimed Zayn had ‘struck’ her, but he told TMZ at the time, ‘I adamantly deny striking Yolanda Hadid and for the sake of my daughter I decline to give any further details.’

However, the performer later plead no contest to four harassment charges against Yolanda, and was sentenced to 360 days probation, along with needing to attend both an anger management class and a domestic violence program, the tabloid had reported. 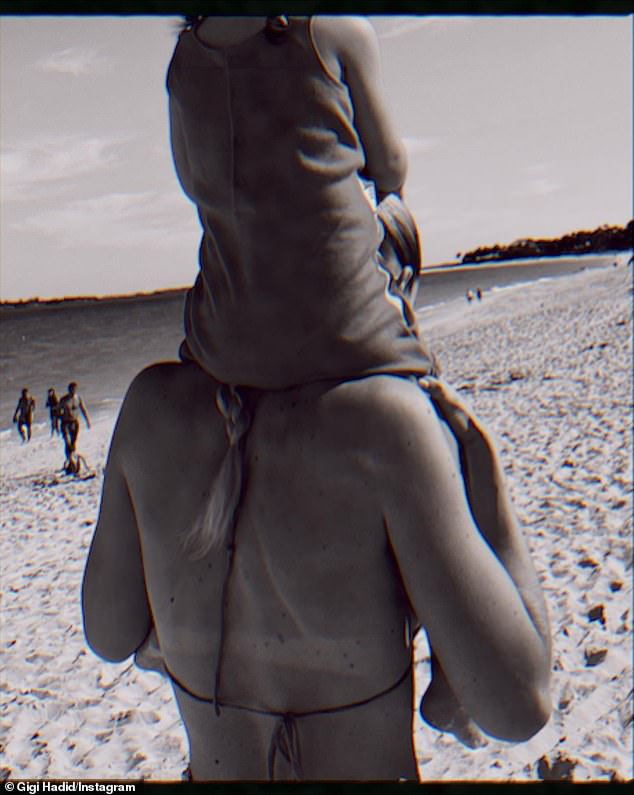 Quality time: In the caption of the Instagram photo series, the businesswoman penned, ‘celebrated the new year w a lil r&r’ 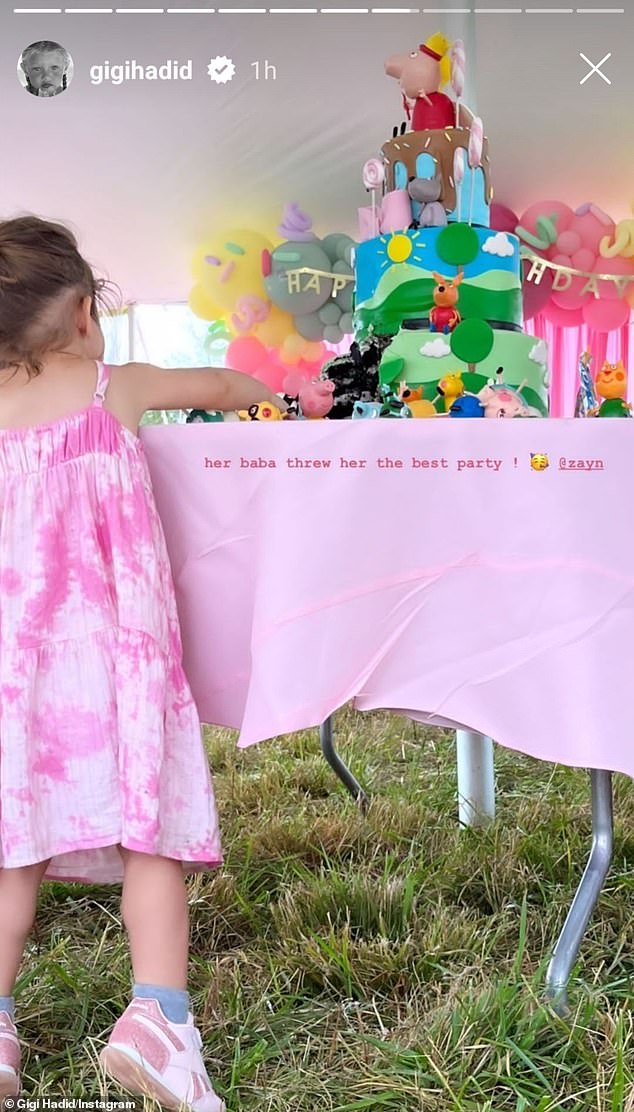 Co-parenting: Following their split in 2021, both Gigi and Zayn have maintained a healthy co-parenting relationship to raise Khai

Despite their split in 2021, a source recently told Us Weekly last year in October that, ‘Gigi has her walls up since she’s on better terms with Zayn and they’re doing well coparenting.’

The insider also expressed that the supermodel, who was reportedly recently linked to Leonardo DiCaprio, is, ‘not rushing into a serious relationship,’ and, ‘is very busy with her modeling gigs and being there for her daughter.’

During an interview on Sunday Today, the blonde beauty gushed about her daughter, stating, ‘I think she’s a genius. But I think that’s what everyone says about their kid.’

She added, ‘It’s so much fun. The more that she talks and understands and remembers, it just gets more and more fun. And she’s a blessing.’ 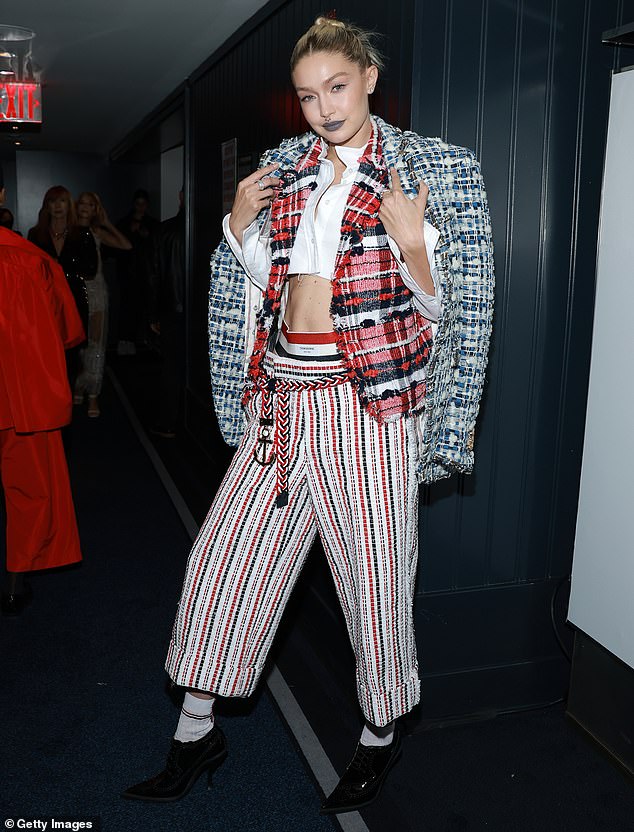 Main focuses: Gigi has been focusing on both her career in fashion, along with raising her daughter; seen in November 2022 in NYC 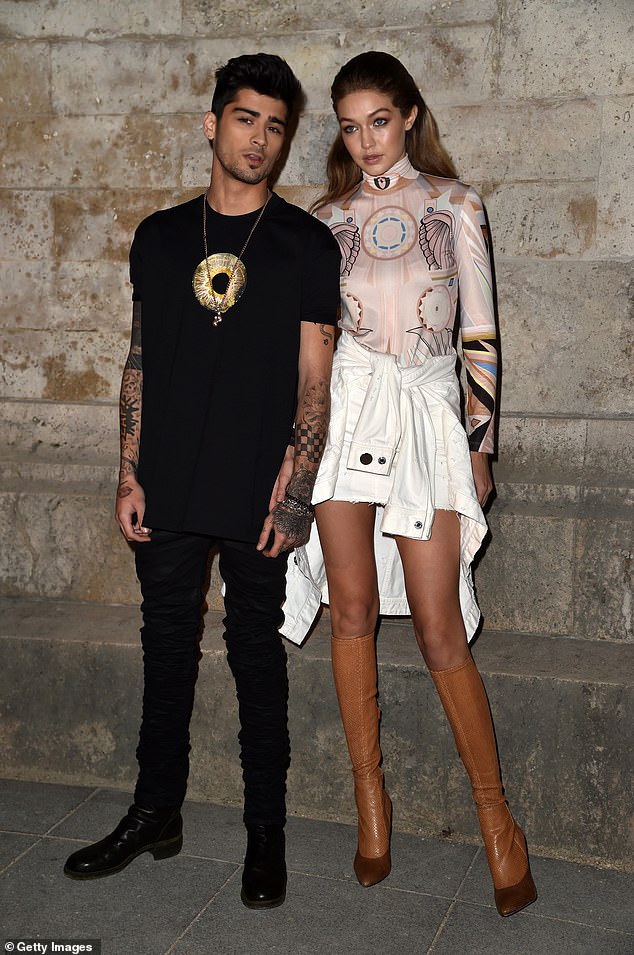 Past relationship: ‘Gigi has her walls up since she’s on better terms with Zayn and they’re doing well coparenting,’ a source recently told Us Weekly; the former couple seen in 2016 together

The entrepreneur has also taken a different step in the fashion industry, and recently launched her own brand called, Guest In Residence, last year in September 2022.

The clothing is made of both knit and cashmere fabrics, and Gigi told Forbes at the time of the launch that, ‘Cashmere is transformative. But there’s a seriousness that can surround cashmere and luxury.’

She excitedly continued, ‘Everyone can find something in this collection that’s a good investment for their wardrobe. I want to encourage people to be more mindful consumers and find things to wear in 100 different ways.’

The star opened a store in Aspen last month in December, and stars flocked to the shop to celebrate the grand opening, including her proud younger sister, Bella Hadid.

Kids dance on top of subway train as it travels over Williamsburg bridge in...