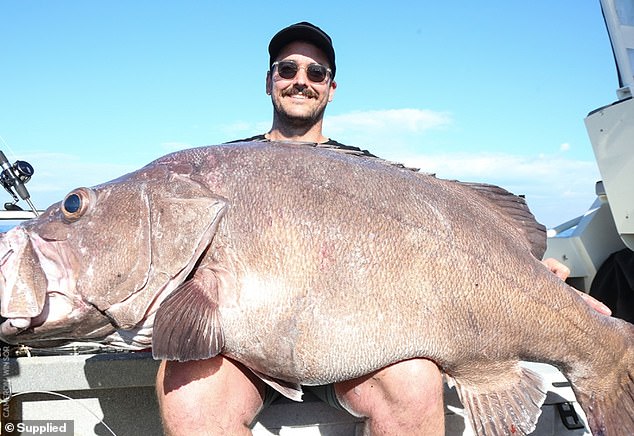 A Perth fisherman had to manhandle a monster fish onto his boat by hand after the massive catch wrecked his tackle.

Now he reckons he won’t need to buy seafood for six months after reeling in the whopper 50kg bass grouper.

Cameron Winsor caught the brown beast near Rottnest Island, out from Perth, earlier this week following a 40 minute battle with the determined deep-sea dweller.

Mr Winsor told Daily Mail Australia he first thought his line was stuck due to the sheer weight of the giant fish.

‘Initially I thought I was snagged. After a few minutes of trying to drive upcurrent to release it, I realised the GPS was still showing me moving,’ he said.

‘Then the fish started to take a few runs, so we knew we were onto something solid.

‘I think the bass was just cruising about his business without even realising it was hooked.’

But then Mr Winsor’s electric reel failed, leaving him and his crew to pull up the 50.6kg fish on their own.

‘I was using an electric reel, but during the fight the reel overheated so I had to take over manual winding,’ he said. 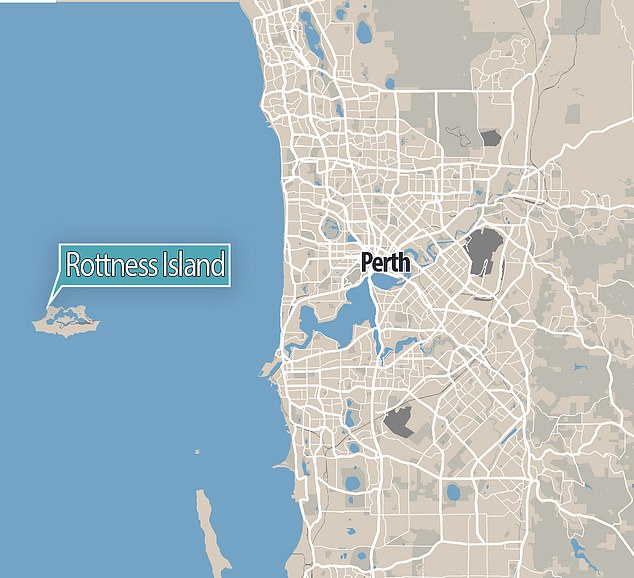 The monster-sized bass groper was caught in the waters near Rottnest Island near Perth, WA

‘After about 40 minutes of fighting we were pulling it through the last 20m, still not knowing what it was.

‘Finally we saw a burst of bubbles come to the surface and the screams erupted on the boat as we pulled it in.

‘After a few high fives I gave the line a pull to test how strong the drag was…I couldn’t get any line off the reel, it’s a wonder nothing else broke.

‘We went out there to test out the Dhubite snelled deep drop rigs, and we certainly proved them strong enough!’ 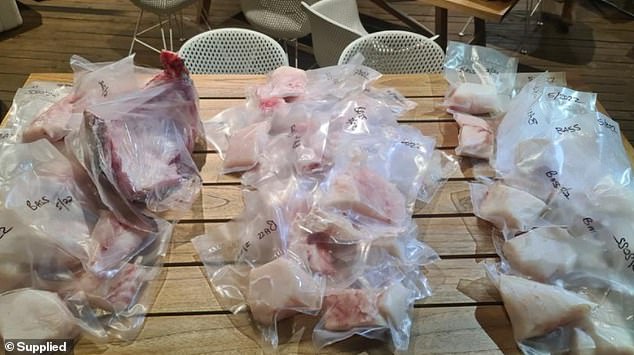 Cameron Winsor said the entire fish – carcass and all! – has been divvied up between his family, friends, workmates at Rio Tinto, and neighbour

Luckily Mr Winsor’s managed to put the big fish to use feeding his family, friends, workmates at Rio Tinto, and neighbour.

‘They are one of the few fish that still taste amazing at that size,’ he said.

‘Unfortunately, there is nothing you can do to release the fish as they come from over 300m and suffer barotrauma on the way up.

‘The best thing you can do is make the most of the meat, which certainly we did.

‘We kept all of the fish, fillets, and wings were frozen into packs and shared. I even took some up to Mesa A to share with my production crew!

‘The head and carcass was given to my neighbour who loves getting the rest of the meat and boiling up the leftovers for her family.

‘It will keep everyone going for months.’

There is no maximum size limit on bass groupers in Western Australia.

British woman and child repatriated from Syrian camp – first let back into UK...

Heidi Klum looks like she is being taken out for a walk by her...