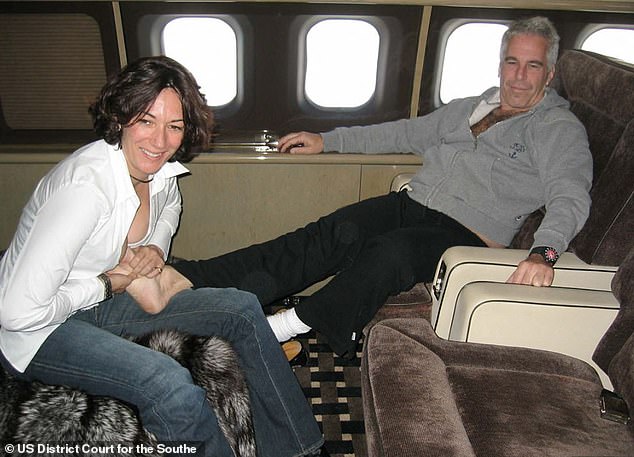 By Sam Greenhill for the Daily Mail

Pampered Ghislaine Maxwell has spun blatant lies about drastic weight and hair loss in prison to win a cushy term but is ‘perfectly healthy’, prosecutors said ahead of her sentencing today.

The British socialite, who faces up to 55 years’ imprisonment for child sex trafficking, ‘spent her entire life living in extraordinary luxury’ and ‘going from being waited on hand and foot to incarceration is undoubtedly a shocking and unpleasant experience’, the lawyers wrote in a scathing note.

But they dismissed Maxwell’s prison ‘horror stories’ as cynical lies to garner sympathy.

The 60-year-old was convicted last December of being a child sex predator who ‘served up’ schoolgirls for herself and paedophile Jeffrey Epstein to molest.

Ghislaine Maxwell, pictured here alongside Jeffrey Epstein aboard a private jet, has been convicted of trafficking girls for sex and ‘serving up’ schoolgirls for the paedophile and herself 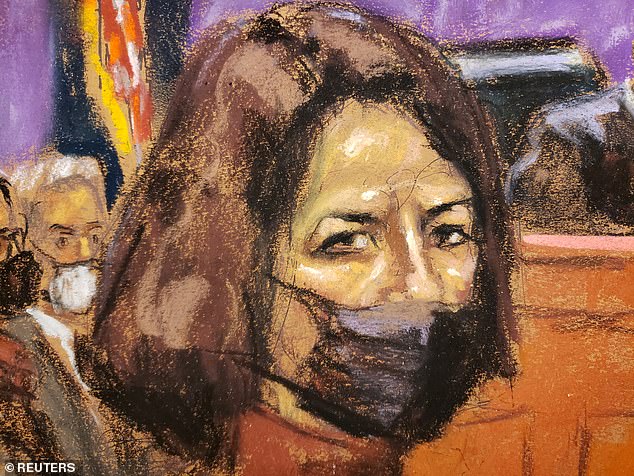 Maxwell sits as the guilty verdict in her sex abuse trial is read in a courtroom sketch in New York City, December 29, 2021

Maxwell will face some of her accusers in the New York court today, including Briton ‘Kate’, who has been granted permission to speak, along with Annie Farmer.

Prince Andrew’s accuser Virginia Giuffre was also given permission to speak but will not attend due to a ‘medical issue’.

In a statement, she urged the judge to ‘cage’ the socialite for the rest of her life.

Maxwell has been on suicide watch at the Metropolitan Detention Centre in Brooklyn but prosecutors say her complaints about dire conditions there are unfounded.

They said she told ‘blatant lies about her own weight loss’ yet medical records showed she weighed only slightly less in April than when she was arrested in July 2020.

Assistant US attorney Maurene Comey said: ‘She repeatedly claims to have suffered significant hair loss, but anyone who has seen the defendant in court can easily see that is not true. The defendant is perfectly healthy, with a full head of hair.’

Yesterday it emerged that Maxwell is relying on a character statement written by a fellow inmate. The alleged cocaine dealer said Maxwell was ‘genuine and kind’.

Brisbane endures its coldest start to winter since 1904 as records fall in Sydney...