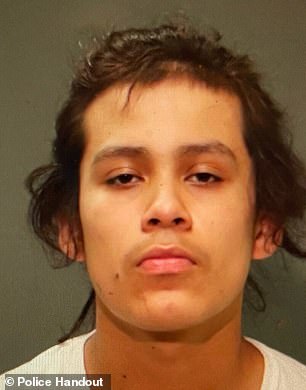 A teen gang member who allegedly shot and killed a Bronx college student just five months after he was released on charges of armed robbery has been freed once again – with the judge accusing prosecutors of ‘improperly’ identifying him as the killer.

In a decision obtained by DailyMail.com, the judge said the proceedings were ‘impaired’ because detectives used surveillance footage to positively identify Mendez as the killer without giving the jury a chance to come to its own conclusions.

On October 24, Mendez and his friends were looking for payback after a member of their gang was beaten, the New York Post reports.

Mendez – who was on probation – shot 21-year-old Saikou Koma in the head in a case of mistaken identity, source said.

The killing came five months after Mendez was freed for a robbery that ended with the victim shot in the leg. At the time, a spokesman for Bronx Supreme Court Justice Denis Boyle said the judge didn’t think prison time was appropriate in the case.

Koma’s mother Haja Kaira says the court is sending the wrong message as crime in the Big Apple is up 42 percent from this time last year.

‘The judge believes my son’s life means nothing. This is why they will keep killing because they know there are no consequences,’ she said. 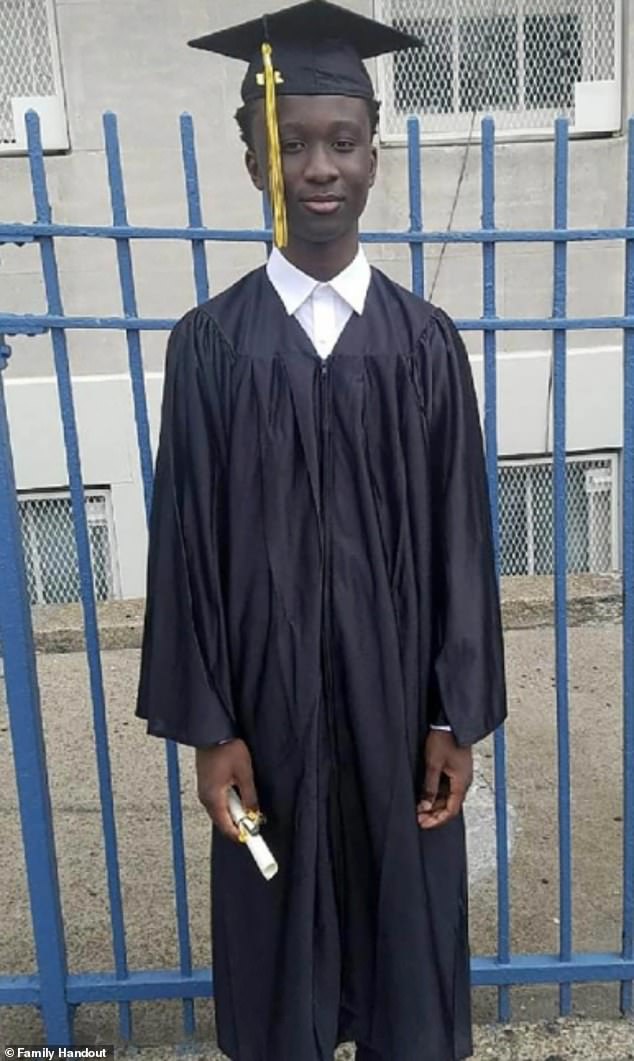 Mendez was accused of killing 21-yaer-old college student and delivery driver Saikou Koma in the Bronx on October 24 in a case of mistaken identity. Mendez had been released on probation for armed robbery five months earlier 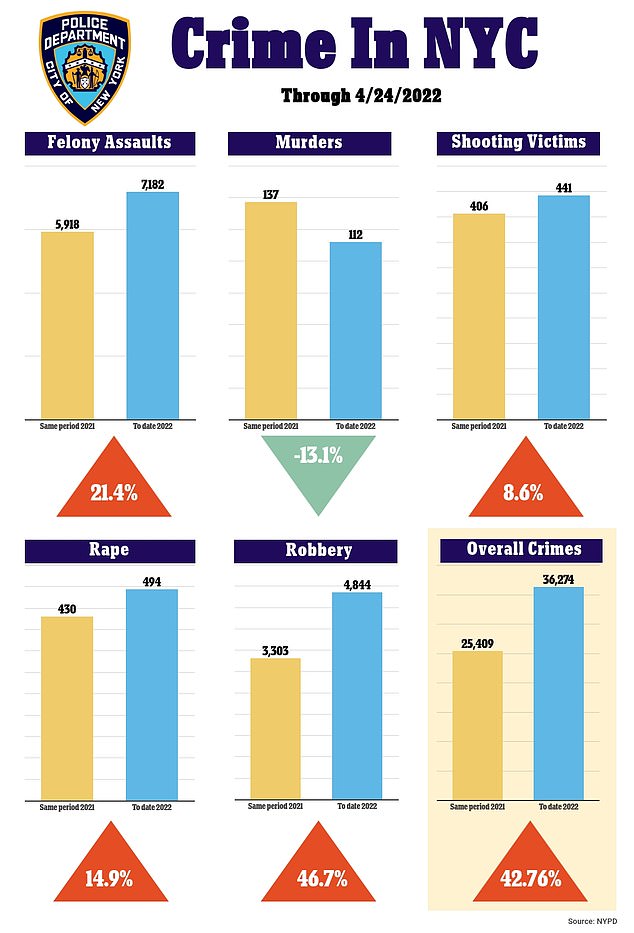 Overall crime is up 42 percent in the city and shooting victims are up 8.6 percent, as the Big Apple continues to battle a crime wave that began during the early days of the pandemic

Judge Semaj-Williams said an NYPD detective ‘improperly identified’ Mendez as Koma’s killer because he ‘never indicated that he had prior contacts with Mr. Mendez prior to his arrest sufficient to establish a basis for identification.’

Detectives relied on surveillance footage that did not show the actual shooting to convince the jury.

Moreover, another detective provided her own ‘opinions, conclusions and characterizations’ when discussing the footage, thus not giving the jury a chance to make up its own mind.

Mendez allegedly shot Koma in the head in the Fordham Heights area last October in a case of mistaken identity.

Koma took classes at Manhattan Community College and worked a delivery job on the side. His parents were immigrants from Sierra Leone and the Gambia.

His family says he never got in trouble.

‘The boy is quiet,’ his mother Haja told the New York Daily News. ‘He’s not troublesome. He’d go to school, do his little job, you know?’

He was released on Tuesday. 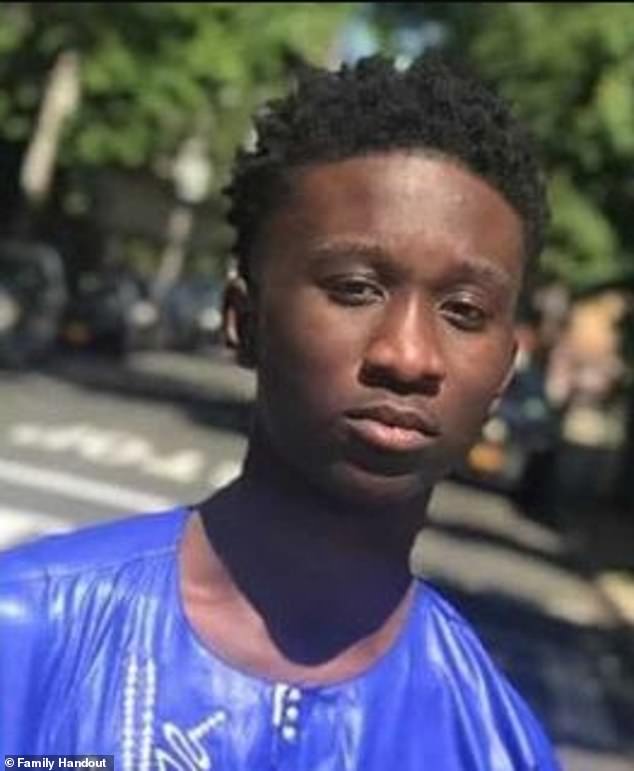 Koma’s parents were immigrants from Sierra Leone and the Gambia. His mother says he never got in trouble and would just ‘go to school, do his little job, you know?’ 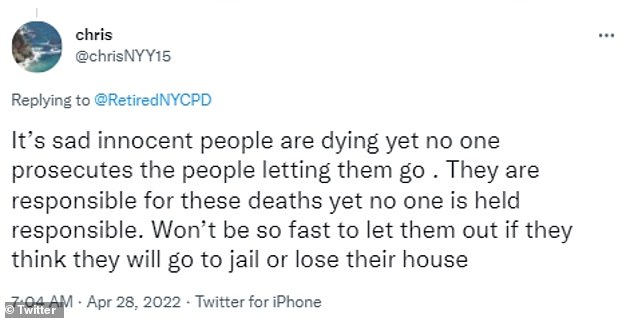 Justice Natia Semaj has been on the bench at the Bronx Supreme Court since January and replaced a notoriously lenient judge in handling juvenile cases – only to show herself to be every bit as lenient as her predecessor.

A native of New York, Semaj grew up in Jamaica, where she had a tough time and was expelled from two separate schools, according to her father.

After graduating from high school in Jamaica, Semaj returned to New York to pursue a higher education and graduated from Lehman College with a degree in social work in 2000, reported Jamaicans.com. 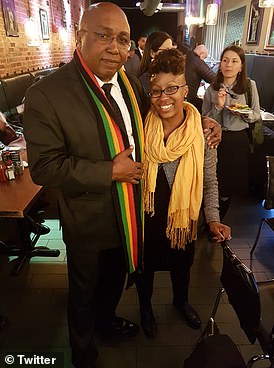 After working as a social worker for a foster care agency, Semaj enrolled in St John’s University School of Law, and after earning her degree and getting her law license  was hired as an attorney with the Administration for Children’s Services.

In 2018, Semaj won a seat on the bench at the New York Civil Court, and last November successfully ran for election for judge of the Bronx Supreme Court.

Braulio Garcia, 17, was arrested in January on charges of murder, manslaughter, robbery and gang assault in connection with the death of Good Samaritan Roland Hueston, who was struck by a train while trying to save another man from the tracks.

Prosecutors had asked that Garcia be held on bail, but Semaj ordered him to be released with supervision.

In the case of Sharif Mitchell, 17, who faces attempted murder charges for allegedly opening fire on a subway platform and shooting a 19-year-old man four time, Semaj released Mitchell on his own recognizance, even though at his arraignment another judge had ordered him held on $30,000 bail.

Semaj is married to a corrections officer and has a young daughter and a stepson. Her current term, which began on January 1, ends in 2035.

‘When I hear the judge say, ‘Release him.’ To be honest, I had to stand up,’ Haja told the Post after watching the hearing remotely.

Mendez allegedly pulled the trigger just five months after soft-on-crime judge Denis Boyle let him off in an armed robbery case, citing his age and a report saying he had been doing well in school, according to the Post.

Mendez was charged as a ‘youthful offender’ and released on five years’ probation last May.

A state court spokesman said Justice Boyle didn’t believe a prison sentence was necessary for ‘a crime committed as an accomplice at the age of 16.’

Earlier this year, Semaj-Williams took over handling juvenile cases from Boyle, who sparked widespread condemnation by allowing teenage suspects accused of serious crimes to be released on bail, reported the New York Post.

But during her first couple months presiding over juvenile cases, Semaj has shown herself to be just as lenient as her predecessor by allowing teenagers facing felony charges to walk free pending trial.

Braulio Garcia, 17, and Jonathan Aponte, 16, were arrested in January and charged with murder, manslaughter, robbery, gang assault and other crimes after throwing someone into the subway tracks on New Years’ Day.

The man who was thrown in didn’t die, but a Good Samaritan who jumped in to save him did after he was struck by a train.

In the case of Sharif Mitchell, 17, who faces attempted murder charges for allegedly opening fire on a subway platform and shooting a 19-year-old man four time, Semaj-Williams released Mitchell on his own recognizance, even though at his arraignment another judge had ordered him held on $30,000 bail.

Semaj-Williams is married to a corrections officer and has a young daughter and a stepson. Her current term, which began on January 1, ends in 2035.

Last month, she moved the case of 16-year-old drill rapper Camrin ‘C Blu’ Williams from an adult criminal court to Family Court, after accusing a police officer of providing ‘unreliable’ testimony that ‘had no value’ about the night the teen allegedly shot a cop during a scuffle.

Williams, who is a suspected gang member, has been out on bond since late January.

He faces charges of criminal possession of a weapon, second-degree assault and other weapons charges stemming from a January 18 incident, during which police said he shot Officer Kaseem Pennant as he was being searched.

Crime in New York City is up 42 percent from last year. Shooting victims are up 8.6 percent, as the city battles a spike in crime that began during the early days of the COVID-19 pandemic.

Over the weekend, Mayor Eric Adams blasted his fellow Democrats for only supporting Black Lives Matter when those behind the killings of African-Americans are cops. 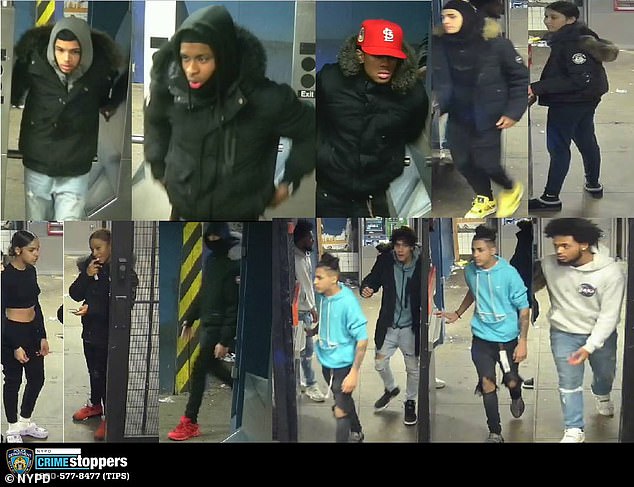 In January, police arrested Braulia Garcia, 17 and Jonathan Aponte, 16. The two were allegedly part of a group that threw a man into the subway tracks on New Years’ Day. A Good Samartian died trying to save the man, but Justice Semaj-Williams let the teens walk free pending trial 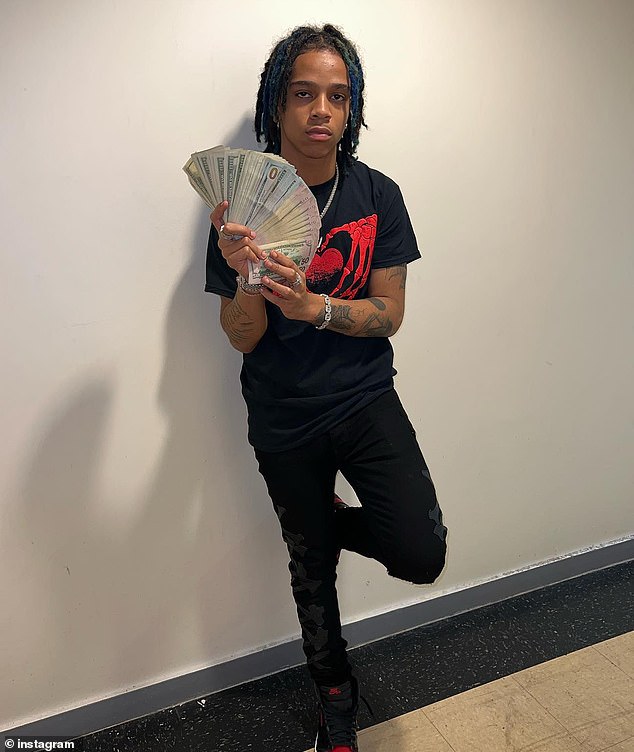 Drill rapper Camrin ‘C Blu’ Williams, 16, had his shooting case transferred from an adult court to Family Court after Semaj-Williams defended his actions during a scuffle with police 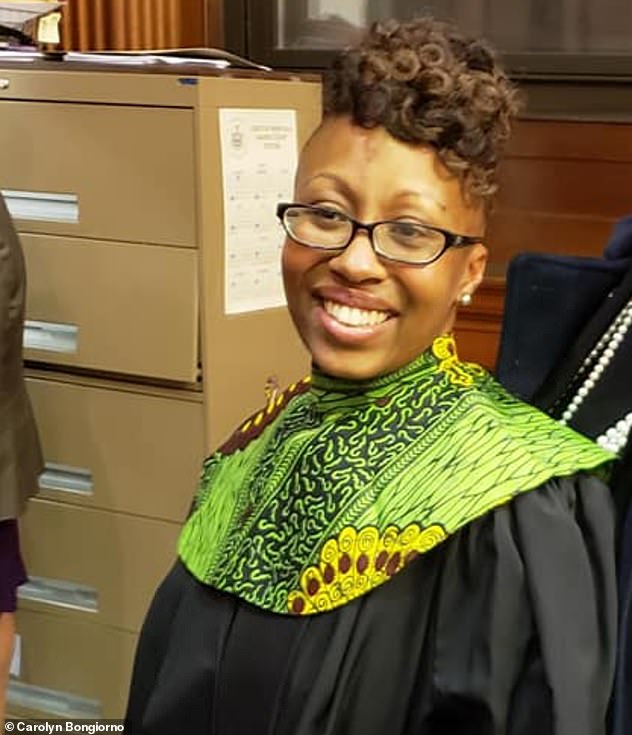 Adams, speaking with Anderson Cooper on CBS’ 60 Minutes, continued his habit of criticizing the party for being soft on crime.

‘But we have to lean into the discomfort of the immediate things we must do. Because you can’t say Black Lives Matter when a police officer shoots a young person, but does that black life matter when a 12-year-old baby was shot?’

Cooper asked Adams why Democrats don’t like talking about intervention.

Adams responded: ‘Because when you talk about intervention, you have to use the term of giving police officers the tools to deal with violence right now.’

Cooper retorted by saying it made liberals nervous because it made him sound like former Republican Mayor Rudy Giuliani. 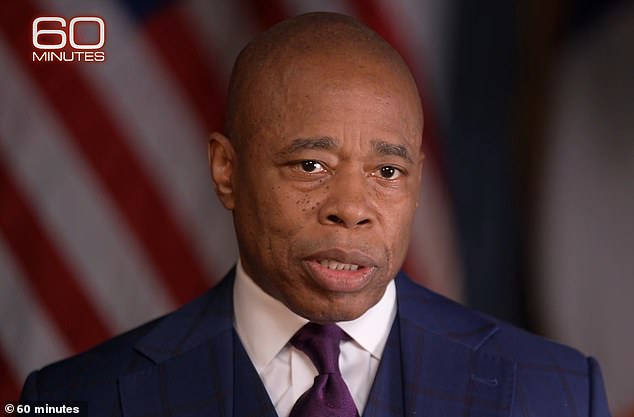 Eric Adams, speaking with Anderson Cooper on CBS’ 60 Minutes, continued his habit of criticizing the party for being soft on crime

‘They have allowed Rudy Giuliani to hijack something that the overwhelming number of people of color want,’ Adams said. ‘They will tell you, ‘We want our police. We don’t want our police to be abusive.’ And that is the balance that I know we can do in this – in this city.’

Adams, who described himself as a ‘simple, pragmatic Democrat’ denied rumors that he had voted for Giuliani in the 90s but admitted to registering as a Republican.

‘I was a police officer, and I saw the violence, and I wasn’t seeing any help on the federal level. It was a protest vote.’

Strictly’s Tony Adams addresses ‘row’ with Katya Jones and says he ‘wants to have...

Interest rates: Why ALL of the Big Four banks are expecting another rate rise...

Sister of Brit shot dead by ex-girlfriend is in ‘shock’ after seeing killer enjoying...