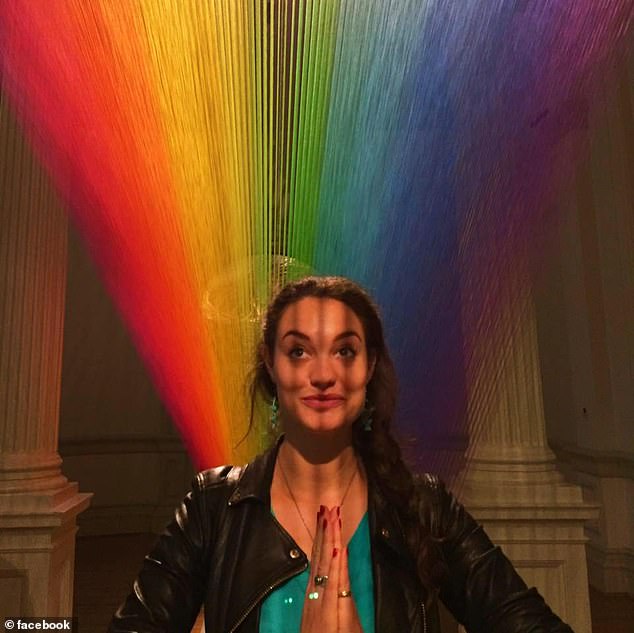 A friend of missing Constance Marten warned her men could take advantage of her – as the hunt for the new mum, her rapist boyfriend and baby entered its 15th day.

They vanished from their burning car on January 5, with the last sighting on CCTV showing them trying to hide their faces on January 7.

Today a friend of Ms Marten, Noisette Tahoun said she had warned her about a ‘vulgar’ previous boyfriend, adding: ‘I told her to stay away from such people because they take advantage of her they don’t love her for who she is. When she falls in love she doesn’t listen to anyone. 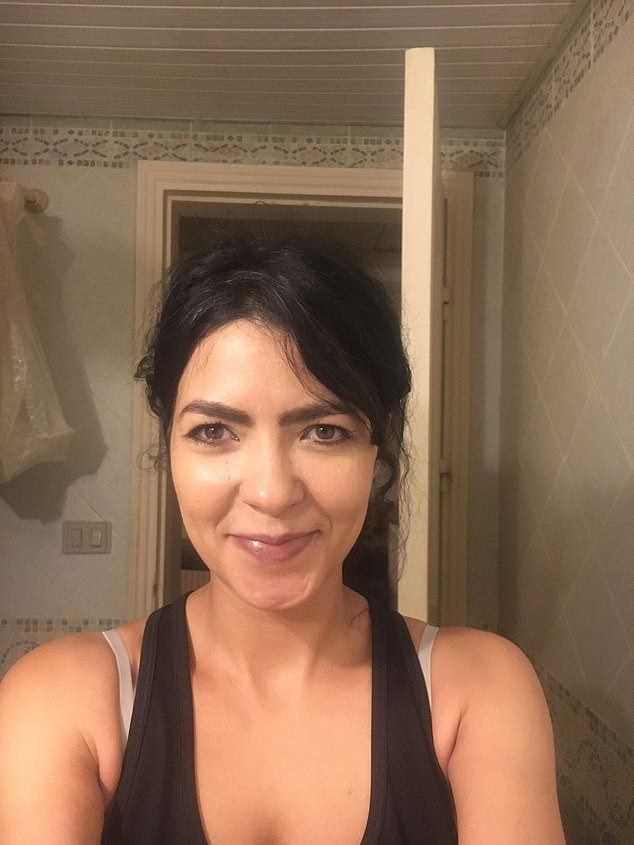 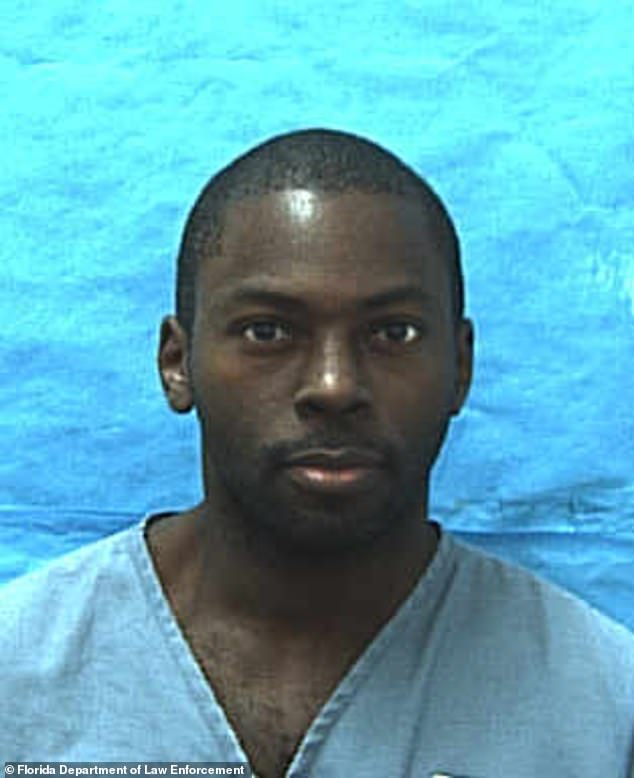 ‘I was not shocked when I heard she was missing.

‘I know when she falls in love she goes anywhere with the person she loves.

‘I’ve given her advice about it. I’ve warned her to take care of the people she gets close to,’ she added to the Independent.

Ms Marten’s partner Gordon is a registered sex offender who was jailed for 20 years in the US for a vicious sex attack in which he took a neighbour hostage aged just 14.

Mark Gordon and Constance Marten have been missing since January 5 after their car broke down and caught fire on the M61. The pair were seen leaving the motorway on foot with their newborn 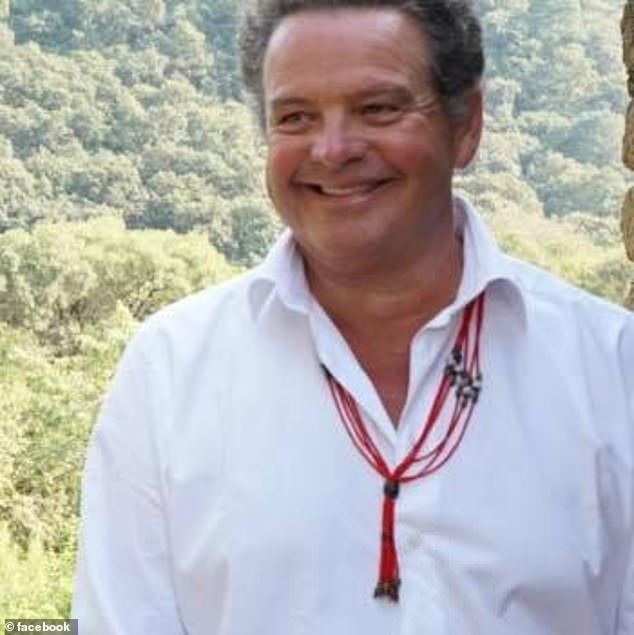 Napier Marten (pictured), is Constance’s father and was a pageboy to Queen Elizabeth II before giving up his £115million fortune after an ‘epiphany’ that told him to flee his ‘materialistic’ life

Last night the horrific details of his victim’s ordeal came out in America and were revealed for the first time.

Gordon’s mother claimed her son is a ‘good boy’ and that he has secretly married the British aristocrat, saying she ‘does not know what all this is about’.

He was born in Birmingham, West Midlands, but he, his mother and his half-siblings moved to the US when he was still a child in 1989.

In April of that year, aged just 14, Gordon armed himself with garden shears and a kitchen knife, then attacked his neighbour in a four-and-a-half-hour ordeal which saw him take her hostage and sexually assault her.

Two young children were sleeping in the room next door at the time of the attack, documents show.

US court records describe how Gordon is said to have broken in through the woman’s bathroom window, before finding a pair of her stockings which he used as a makeshift mask to cover his face. 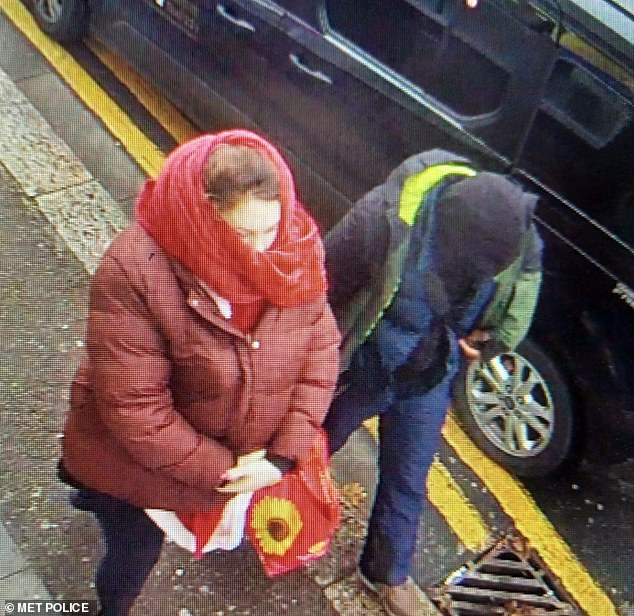 Constance Marten and Mark Gordon outside East Ham station at around 11.45am on Saturday January 7 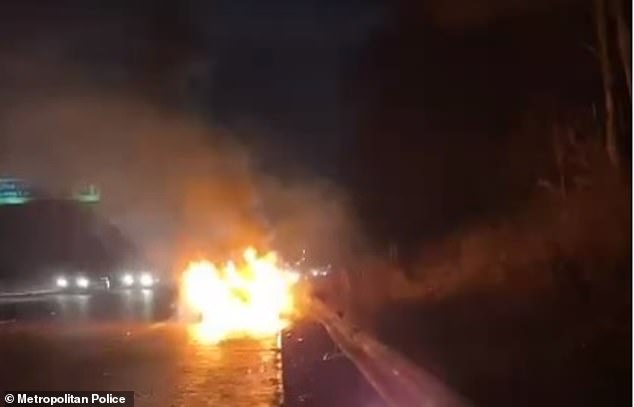 The car the pair were driving broke down and caught fire, as seen in this picture from police released as part of the search

Once he had encountered his victim, the documents state: ‘The suspect ordered the victim back into the bedroom and while still armed, demanded that the victim undress.’

He is then said to sexually assaulted and raped the victim.

There were a total of six charges against Gordon relating to the April 29 attack: one count of armed kidnapping, four separate counts of armed sexual battery and one count of burglary with a deadly weapon. He was convicted on all charges.

The file described Gordon’s actions once he had entered the house: ‘The suspect placed a nylon stocking over his face to conceal his identity since he lived next door and was known by her.

‘The suspect was armed with a kitchen knife as well as a pair of hedge clippers and after the victim came out of her bedroom to investigate the dogs barking, came across the suspect lurking just outside her bedroom door.

‘The victim was held for a period of approximately four-and-a-half hours against her will by the armed intruder.

‘After miranda [being given the right to remain silent], the suspect admitted to the crime and gave a sworn, taped statement outlining the sequence of events as they occurred.

‘It should be noted that during the commission of the crime, the victim’s two small children were sleeping in their bedroom.’ 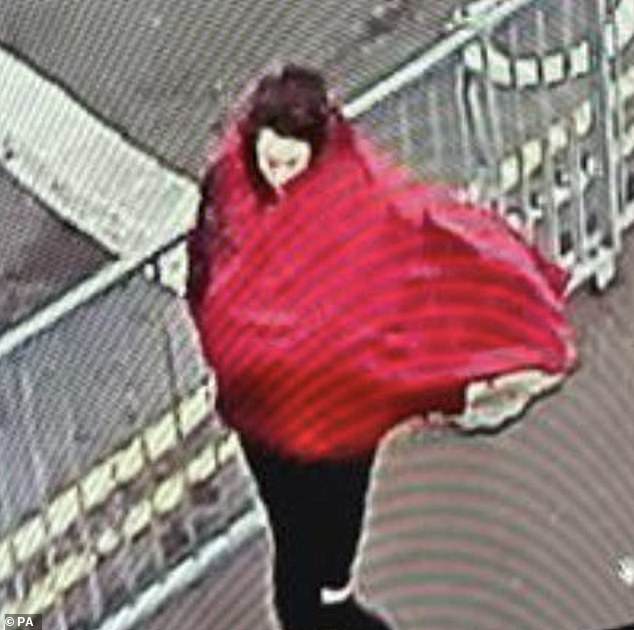 After her car broke down on the M61 near Bolton on Thursday evening, Ms Marten is believed to have been spotted wrapped in red blanket in Harwich Port, Essex on Saturday at 9am 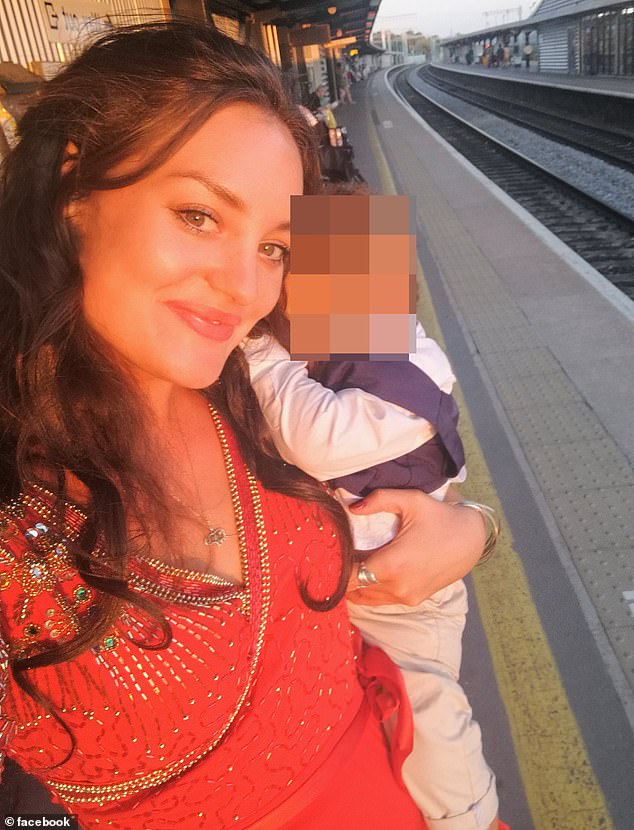 Ms Marten (pictured) and her partner have now been missing for days. However, there have been several sightings including in Essex and East London

Gordon was tried as an adult and sentenced to 20 years in jail after finally being arrested following six weeks spent on the run.

While a fugitive from the first attack, Gordon committed another violent armed raid just weeks later.

On May 21, he broke into a man’s house while he was sleeping, grabbed a kitchen knife and then battered the householder around the head with a heavy shovel when he awoke.

Court documents state that Gordon encountered the man, one of multiple occupants of the house, lying in bed when he suddenly awakened, ‘at which time the defendant beat the victim about his head and body’ with the shovel. 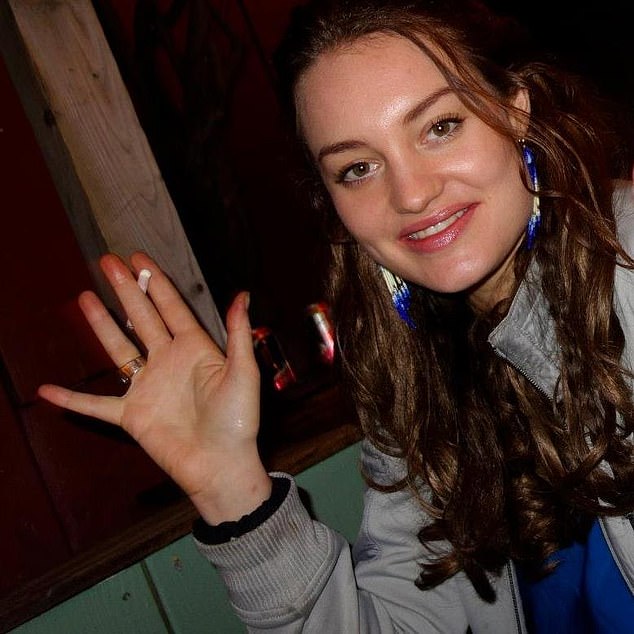 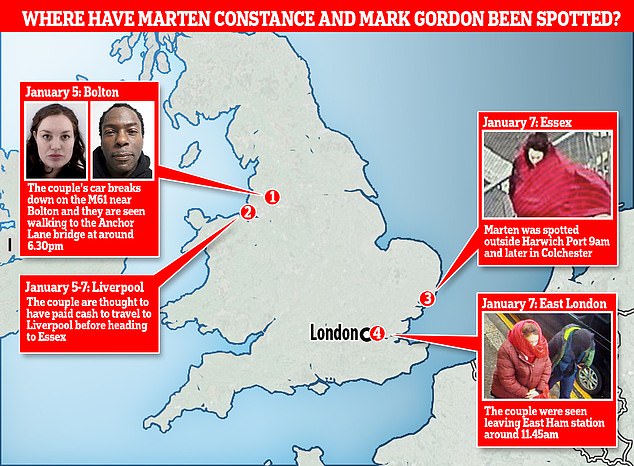 He then fled empty-handed leaving the victim seriously injured.

Police finally caught up with Gordon a month later on June 13 when he confessed to both raids.

It comes after film producer Napier Marten issued a plea to his estranged daughter Constance to get herself and the child to safety.

Mr Marten, son of Mary Anna Marten, whose godmother was the late Queen mother, told the Independent: ‘Darling Constance, even though we remain estranged at the moment, I stand by, as I have always done and as the family has always done, to do whatever is necessary for your safe return to us. 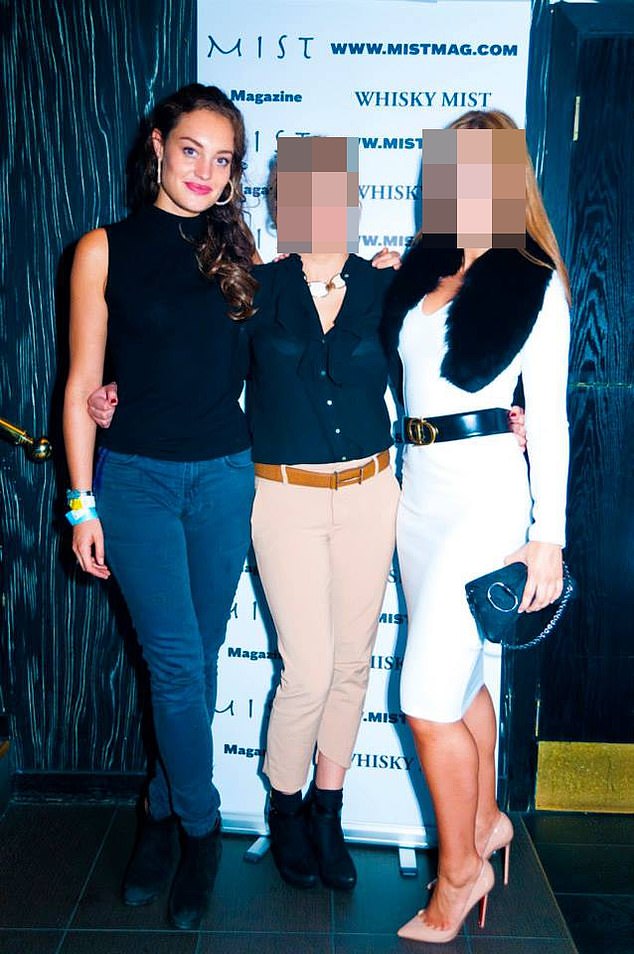 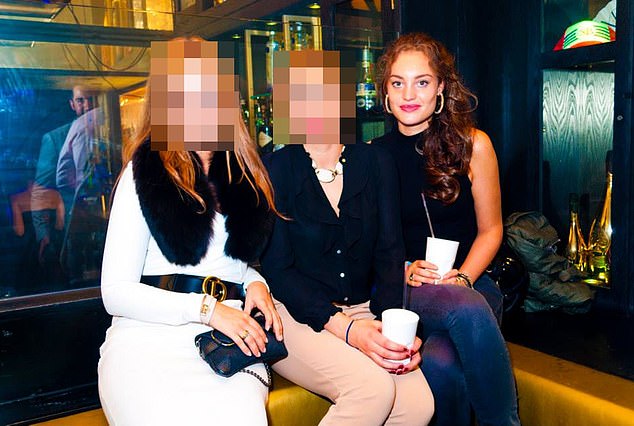 Constance Marten, pictured on the right, at Mist Mag party in 2013 with two other women

‘I beseech you to find a way to turn yourself and your wee one in to the police as soon as possible, so you and he or she can be protected.

‘Only then can a process of healing and recovery begin, however long it may take, however difficult it may be.

‘We are deeply concerned for your and your baby’s welfare.

‘I would like you to understand that the family will do all that is needed for your wellbeing.

‘And I also wish you to understand you are much, much loved whatever the circumstances.’

Ms Marten has now been missing for nearly two weeks.

Yesterday the Metropolitan Police, who are leading the search to find the pair and newborn, said they have a substantial amount of cash on them from a multi-million trust fund that permits them to live off-grid.

They have no luggage with them after most of their belongings were destroyed in the car fire, and they are using money to pay for taxis.

Police are worried for the newborn and say neither Ms Marten nor the baby have had medical attention since the birth.

The couple are understood to have lived an isolated life since meeting in 2016 in London, with then-drama student Ms Marten cutting off ties with family and friends.

It is not clear how they met, but Gordon is believed to have lived locally to her and worked as a labourer.

Last September, they began moving around the country, renting AirBnBs for brief periods.

On January 5, they were on the M61 when their car broke down and caught fire near junction four at Farnworth, Bolton.

The couple then walked to Anchor Lane Bridge, where they took a taxi to Liverpool before getting another to Harwich, Essex.

They were seen around Colchester on Friday January 6 and Saturday 7, when they took another taxi to East Ham Station in Newham, London.

Each time Ms Marten and Mr Gordon are seen on CCTV, they are covering their faces or looking away, and have kept the baby covered up.

Investigators say the couple appear to know how to evade authorities – making the search for them harder.

Police believe they could be anywhere in the UK and are appealing to the public to come forward with any information that may help find them.

Some 200 officers are working on the search and have scoured through more than 200 hours of CCTV footage since the pair were last seen on January 7.

Gordon’s conviction relates to a Florida attack on a woman in her early 20s when he was 14.

Ms Marten is the granddaughter of Mary Anna Marten, whose godmother was the late Queen mother.

The family used to own the Crichel estate in Dorset.

Privately educated, the 35-year-old hails from an aristocratic family with links to the royals.

When she was 21, she featured in society magazine Tatler as its ‘Babe of the Month’.

Posing in 2009 for a Q&A-type feature, Ms Marten described her favourite place as being on top of the Matterhorn, which she had recently climbed.

Asked what her best party had been, she answered: ‘Viscount Cranbourne’s party in Dorset – the theme was the Feast of Bacchus.’

She added that her party trick was ‘crunching a Coke can between my shoulder blades’ like ‘a human recycling machine’ and that her future plans included getting a tattoo of a tortoise on the bottom of her foot.

Royal expert slams Harry after Netflix claims and says Diana would be ‘appalled at...