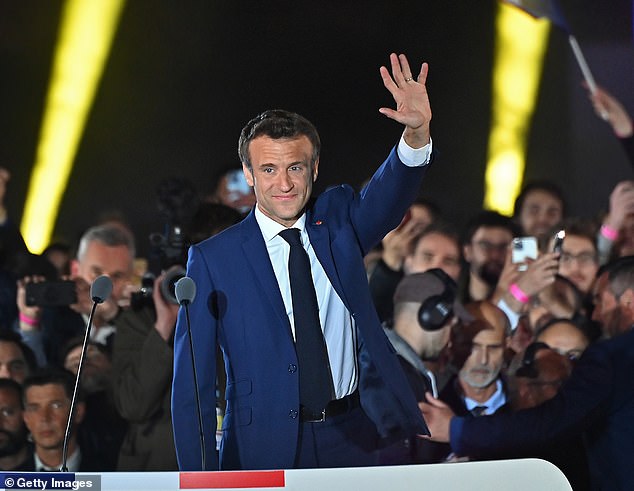 Emmanuel Macron‘s victory over his far-right rival Marine Le Pen has been described as a ‘victory without triumph’ by the French media after the National Rally gathered an unprecedented number of votes.

But his latest victory over his far-right rival was narrower than their last face-off in 2017, when he won over 66 per cent of the vote, and Le Pen’s result was the best ever for the far right with 13.2 million people voting for her.

And in a sign of trouble to come, two polls published late Sunday showed that most voters do not wish for him to also carry the parliamentary vote in the June elections.

Whilst Le Pen did not win on Sunday, with 41.5 per cent of the vote, Le Pen’s anti-foreigner, anti-system politics of disgruntlement are now more entrenched than ever in the psyche, thinking and political landscape of France.

Conservative daily Le Figaro, which ran the front page headline of ‘Great victory, great challenges’, said after all the difficulties of his first term, Macron’s win was ‘no mean feat’, but also asked: ‘Who can possibly believe that it is rooted in popular support?’

In a striking sign of public disenchantment with politics, 8.6 percent of people who voted either delivered a blank ballot or spoilt their papers, interior ministry figures showed.

Turnout was also just 72 per cent, the lowest in any presidential election second-round run-off since 1969. 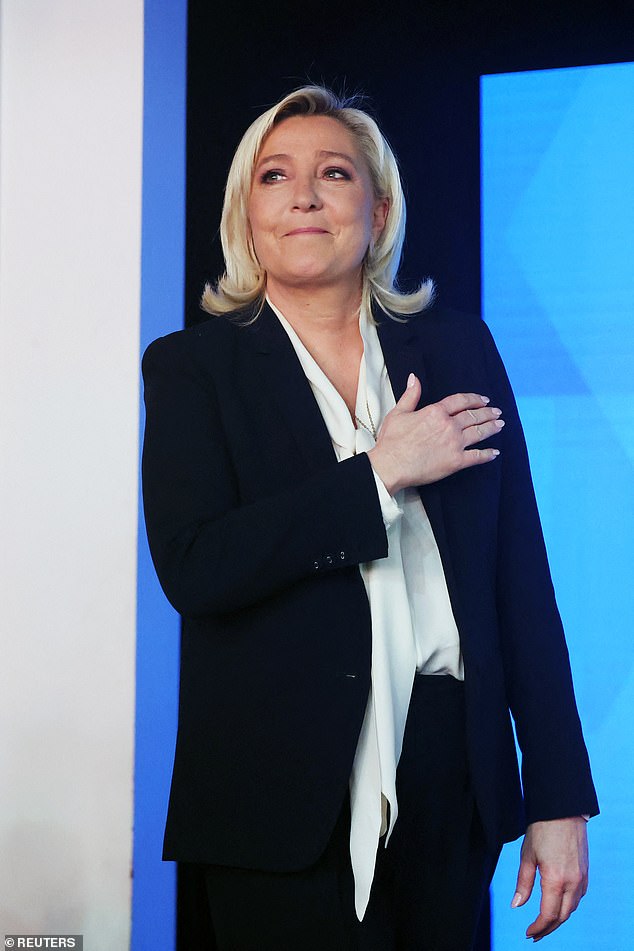 But his latest victory over his far-right rival was narrower than their last face-off in 2017, when he won over 66 per cent of the vote, and Marine Le Pen’s result was the best ever for the far right with 13.2 million people voting for her 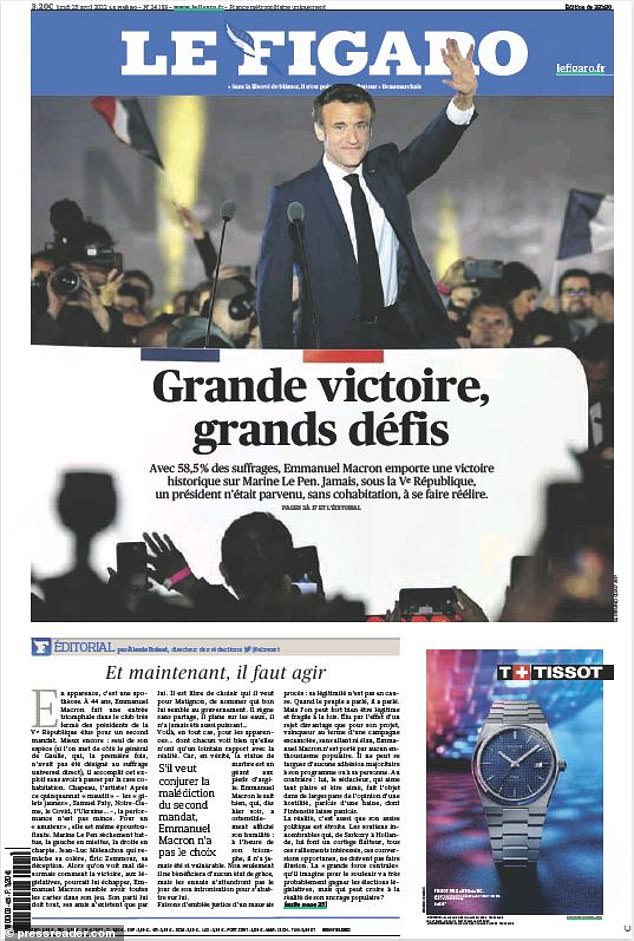 Conservative daily Le Figaro ran a front page with the headline ‘Great victory, great challenges’, said after all the challenges of his first term, Macron’s win was ‘no mean feat’, but also asked: ‘Who can possibly believe that it is rooted in popular support?’ 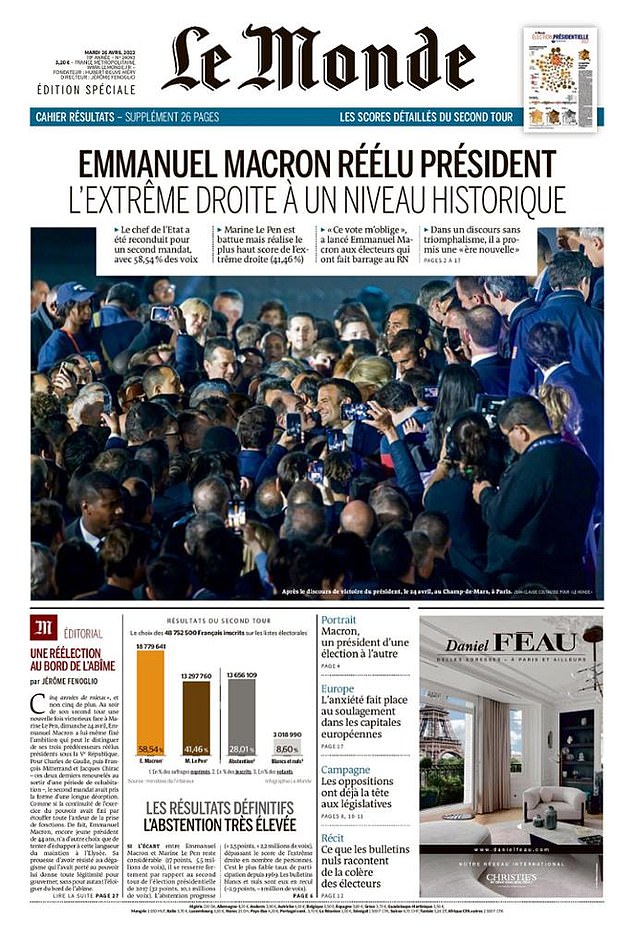 Le Pen, 53, said she would ‘never abandon’ the French and was already preparing for the June legislative elections.

‘In this defeat, I can’t help but feel a form of hope,’ she said, adding that the result represents a ‘brilliant victory’.

For headscarf-wearing voter Yasmina Aksas, Le Pen’s defeat wasn’t a celebration moment – not with such strong backing for her and ideas that ‘used to be limited to militant far-right groups’ becoming increasingly acceptable in polite company.

The historic gains for the far right dampened the French leader’s celebrations on Sunday night. Addressing supporters in the shadow of the Eiffel Tower, Macron vowed to heal rifts in a deeply divided country.

‘From now on, I am not the candidate of one camp, but everybody’s president,’ he said.

‘Many of our fellow citizens voted for me not because of the ideas I represent, but to block those of the extreme right,’ Macron acknowledged.

The president now faces the challenge of parliamentary elections in June, where keeping a majority will be critical to ensuring he can realise his ambitions.

‘Macron’s biggest challenge will be to create a sense of cohesion in an extremely fragmented country,’ said Tara Varma, senior policy fellow and head of the Paris office of the European Council on Foreign Relations.

‘Le Pen will do her best to capitalise on her result for the June parliamentary elections.’ 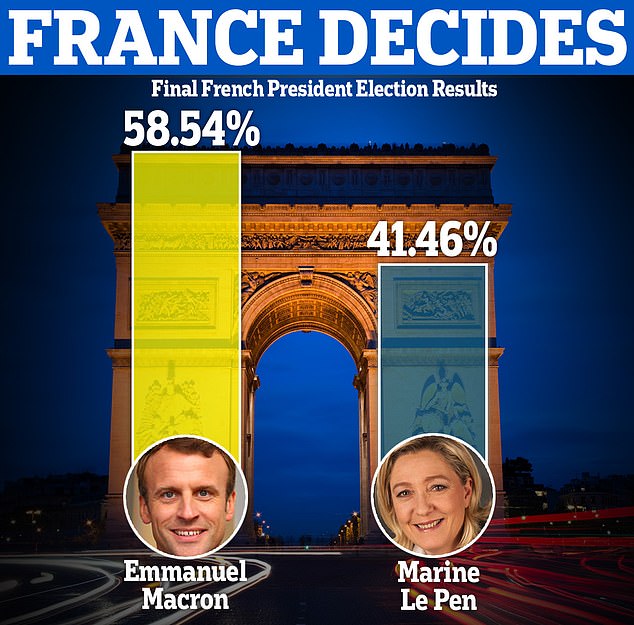 Several hundred demonstrators from ultra-left groups took to the streets in some French cities late Sunday in protest at the election outcome. Police used tear gas to disperse gatherings in Paris and the western city of Rennes.

In his victory speech, Macron promised his next five-year term would respond to the frustrations of voters who backed Le Pen.

‘An answer must be found to the anger and disagreements that led many of our compatriots to vote for the extreme right,’ he told thousands of cheering supporters.

‘It will be my responsibility and that of those around me.’

He also pledged that this ‘new era’ would not be one of ‘continuity with the last term which is now ending’.

The June 12 and June 19 parliamentary elections will be what hard-left Jean-Luc Melenchon immediately called a ‘third round’ of the presidential election, with opposition parties of all stripes hoping they can win this time.

‘The recomposition of the French political landscape is not over. The majority that emerges from the parliamentary elections will be decisive for economic policy,’ said Amundi Chief Investment Officer Vincent Mortier.

The message across the Macron camp on Monday morning was that they would listen more, after a first mandate in which Macron himself initially called his leadership style ‘Jupiterian’, suggesting he would stay above the political fray.

‘When a proposal that affects the lives of the French comes to the National Assembly, the deputies must go and discuss it with the French,’ parliament leader Richard Ferrand, a close ally of Macron, told France Inter.

‘Otherwise, there is a risk of a divide between parliamentarians and what the French feel.’ 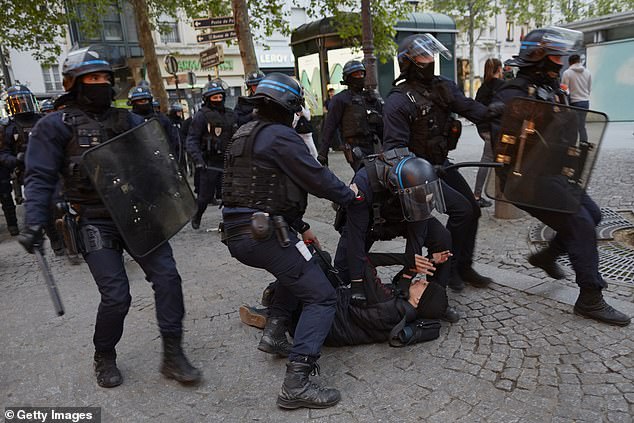 After a campaign dominated by cost of living issues, Finance Minister Bruno Le Maire told Franceinfo that price caps on energy would stay until the end of the year, to ease the surge in energy prices fuelled by the Ukraine war.

For Le Pen, her third defeat in a presidential poll was a bitter pill after she ploughed years of effort into making herself electable and distancing her party from the legacy of its founder, her father Jean-Marie Le Pen.

Macron’s re-election sparked relief across Europe where many felt a Le Pen presidency would have left the continent rudderless following Brexit and the departure from politics of German chancellor Angela Merkel.

Macron will now try to implement his vision of more pro-business reform and tighter EU integration, after a first term shadowed by protests, then the coronavirus pandemic and finally Russia’s invasion of Ukraine.

Kate Ritchie set to be replaced by Ricki-Lee Coulter on Nova after falling out...

Major crash wipes out almost half of the field just 10 seconds into chaotic...

Epstein accuser reveals what it was like to stay at pedophile’s plush ‘holding facility’...