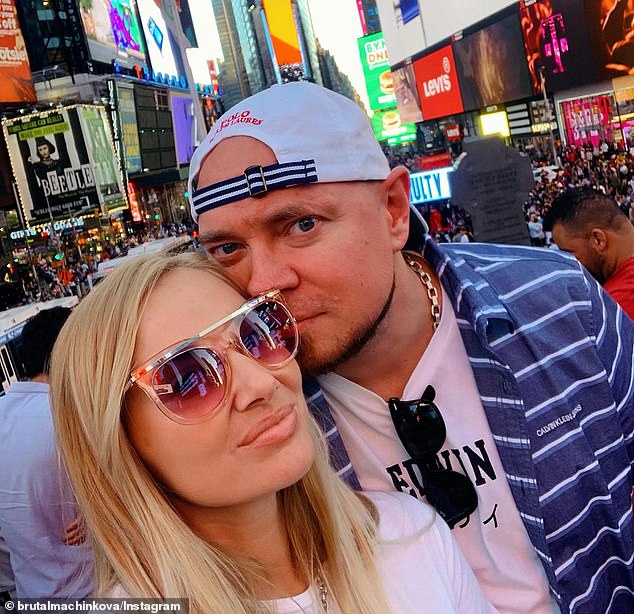 A former Russian diplomat recently posted to the United Nations in New York was a devoted neo-Nazi who plastered the city with Nazi insignia, DailyMail.com has learned.

The news comes as his former boss, Russian President Vladimir Putin, defends his invasion of Ukraine as an effort to ‘de-Nazify’ the country.

Kirill Kolchin, a onetime member of Russia’s diplomatic support staff based at the country’s permanent mission to the United Nations, arrived in New York City in the summer of 2019 with his wife Alena and their two children. They left around six months later, in February 2020.

A man who appeared to be Kolchin was photographed making a Nazi salute in an image posted to the Old School Skins account on Instagram – a Neo Nazi group which Kolchin promotes on his own page.

On July 29, 2019, a photo was posted to the OSS page showing an OSS sticker being held in front of Nazi uniforms and newspapers in Kaliningrad, the Russian enclave on the Baltic Sea, in what looked like a museum.

Kolchin, who is believed to be in his late 30s, describes himself as ‘father, OSS and huckster’, and pictures on his page include the Iron Cross symbol adopted by Hitler.

Russia’s decision to employ an open neo-Nazi on its UN staff is particularly jarring given Putin’s statements on the ongoing war in Ukraine – which he has taken to referring to as a ‘special military operation’ to demilitarize and ‘denazify’ the country.

He’s blamed the invasion – without evidence – on ‘Nazis, murderers and collaborators’ that have stirred up ‘Russophobia’ within the former Soviet nation.

Announcing the ‘special military operation’, Putin boasted: ‘Its goal is to protect people who have been subjected to bullying and genocide by the Kiev regime for eight years. And for this we will strive for the demilitarisation and deNazification of Ukraine, as well as bringing to justice those who committed numerous, bloody crimes against civilians, including citizens of the Russian Federation.’

Kirill Kolchin and his wife Alena are pictured in Times Square in the summer of 2019. They lived in the city for around six months, leaving in February 2020. Kolchin made no secret of his neo-Nazi links 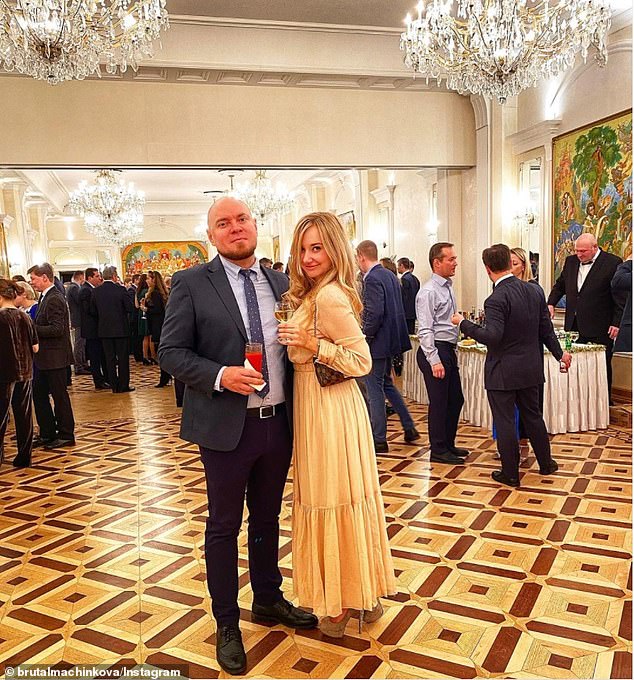 Kolchin and his wife are pictured on December 26, 2019, attending what appeared to be a gala or diplomatic function in Manhattan. The Russian Mission to the U.N. is house on Lexington Avenue, at East 67th Street 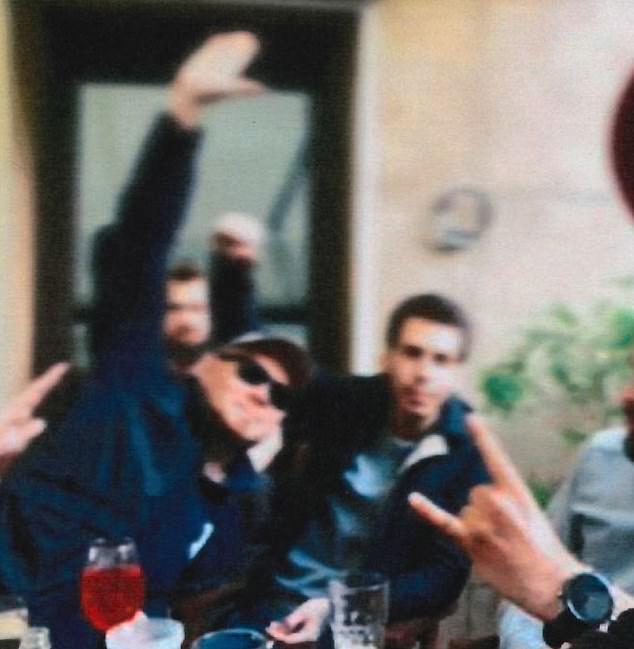 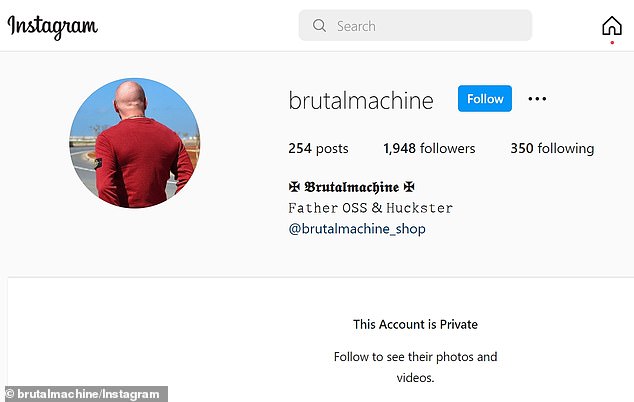 Kolchin’s Instagram page features the Nazi insignia, the Iron Cross. He describes himself as a supporter of OSS – the Old School Skins, a neo-Nazi group which openly promotes violence 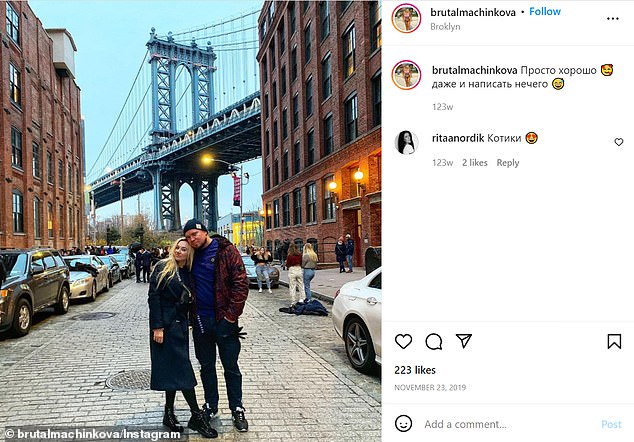 Kolchin frequently poses in the black t-shirt of the OSS, with its bulldog logo.

He is seen wearing the t-shirt at Coney Island, and another OSS t-shirt at Cassidy’s Pub in Manhattan, around the corner from Trump Tower.

The OSS sticker is pictured being held aloft around various sites around New York City – near Times Square, in front of the Queensborough Bridge, and on Brighton Beach – home to a large Russian community.

In one image, a hand is seen holding an OSS sticker in front of a NYPD cruiser.

On August 31, 2019 – while Kolchin was in New York – a video was posted to the OSS page showing a hand sticking an OSS sticker, bearing the neo-Nazi ‘totenkopf’ or ‘death skull’, to a lamp post near Times Square. 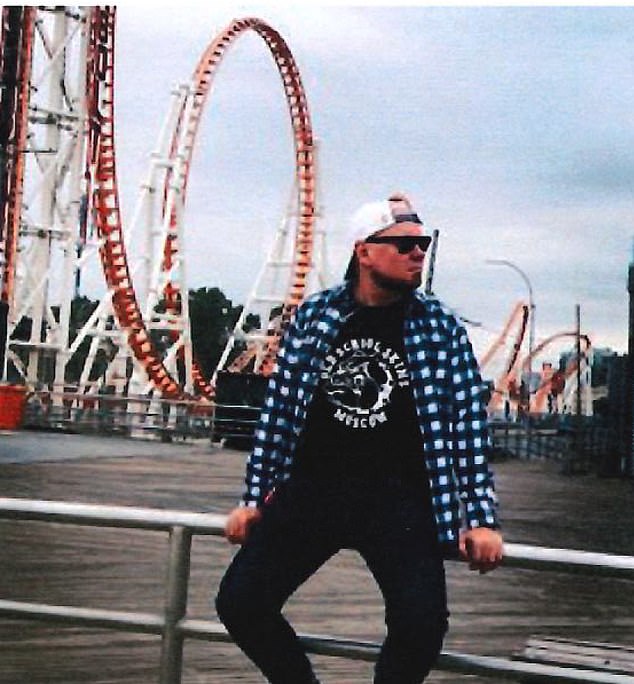 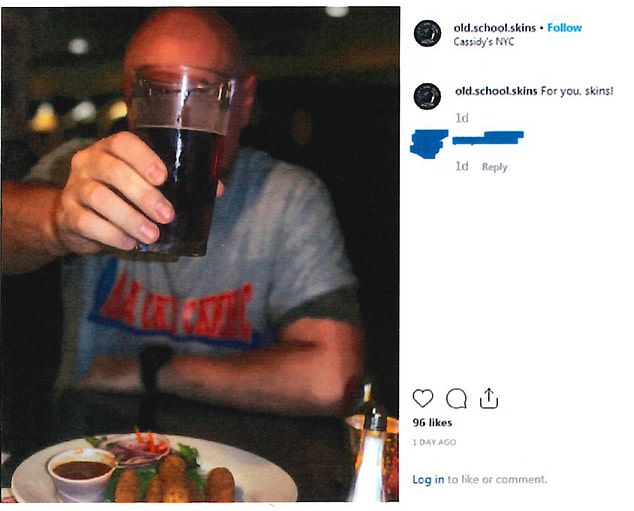 The Russian diplomat is pictured at Cassidy’s Pub, around the corner from Trump Tower in Manhattan, wearing an OSS t-shirt 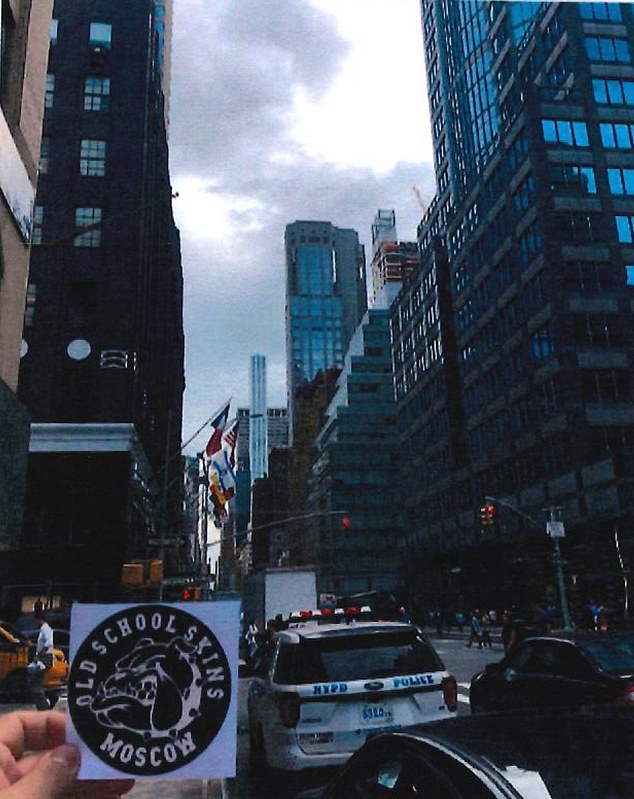 On August 27, 2019, an image was posted to the OSS page of a hand holding their sticker in front of a NYPD cruiser 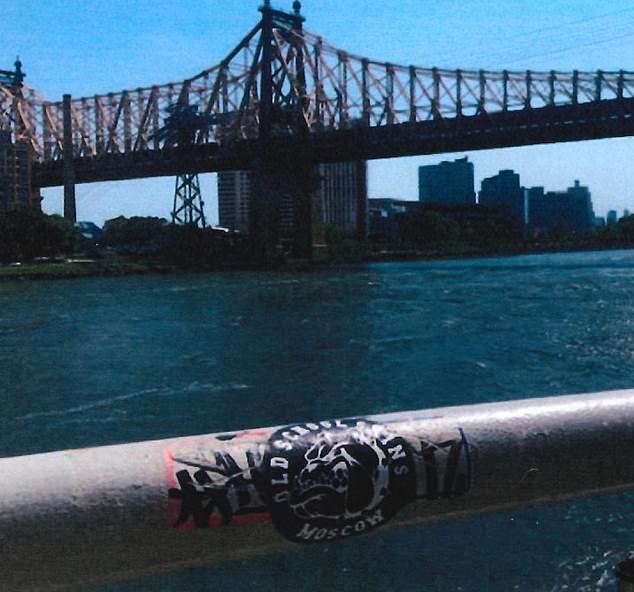 On August 30, 2019, the OSS Instagram page shared a photo of their sticker by the Queensborough Bridge, near the United Nations headquarters 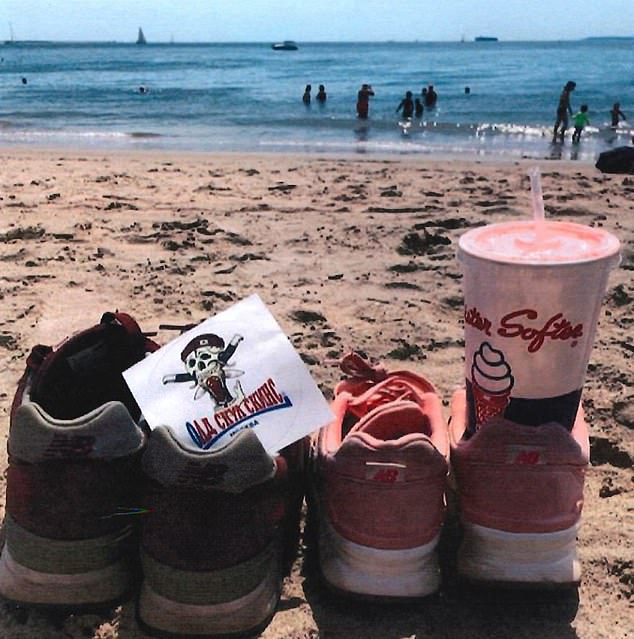 Another OSS sticker, with the ‘death’s head’ logo, was pictured on August 31, 2019 at Brighton Beach – a Brooklyn district with a large Russian population 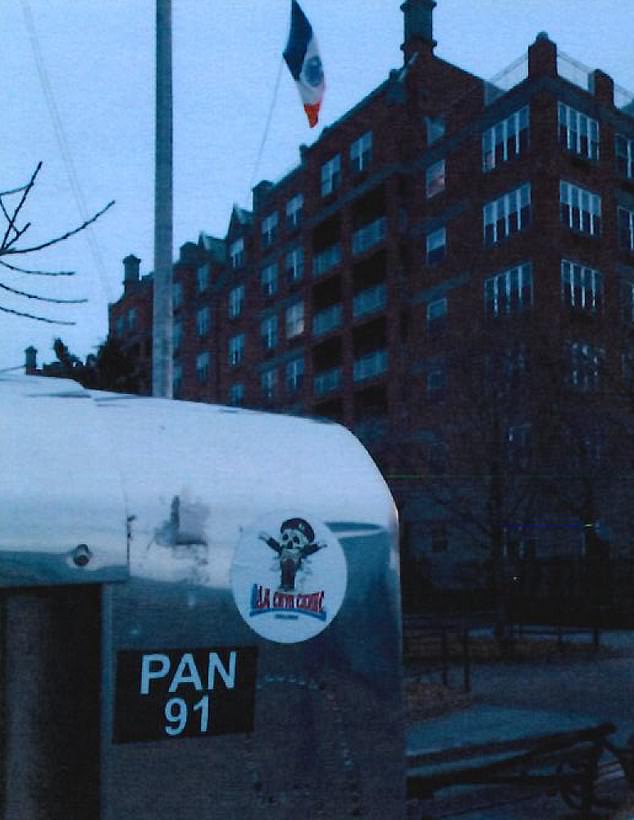 Kolchin’s son was photographed wearing an OSS mask, which also featured the Celtic Cross and the letters SS

Kolchin himself is never seen attaching the stickers.

In October 2019, Kolchin’s son is pictured on the OSS page wearing a mask emblazoned with the SS logo.

Kolchin’s personal page also links to an Instagram store, selling designer goods from labels such as Burberry, Ellesse, Lacoste and Ralph Lauren. He himself is often pictured in the clothes, as is his wife.

The OSS account was deactivated in January 2020 – a month before Kolchin left.

It reactivated in October 2020, with all the New York postings removed.

New posts included rifles, knives and knuckledusters, plus what appeared to be canisters of pepper spray.

One of the images of the guns was captioned with: ‘Head shot antifa scum’. 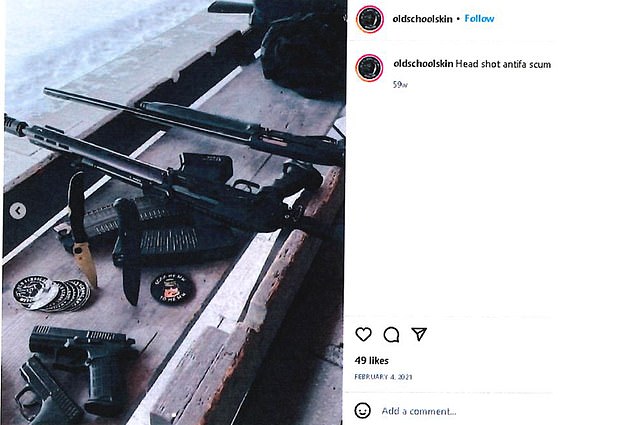 The OSS account was deactivated, and posts from New York deleted. It has now returned 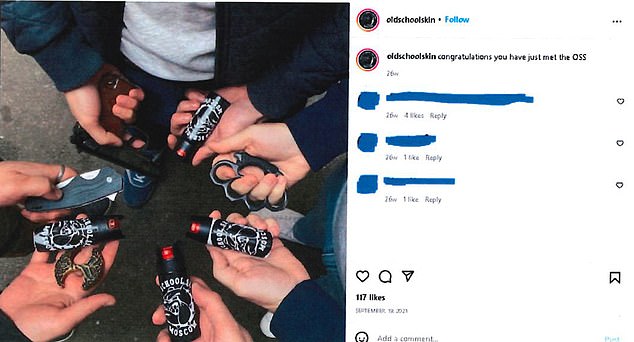 A post to the OSS page from September, captioned: ‘Congratulations. You have just met the OSS’

Kolchin’s official activities while in New York are unclear.

He was officially a member of the diplomatic support staff, based at the Russian Mission to the U.N. on the Upper East Side.

He now appears to be back in Moscow.

Kolchin’s wife on March 27 posted a photo of her celebrating her birthday, captioned: ’33! And I’m happy!’

On February 12, she and her husband were pictured in Moscow, at the Los Bandidos Bar. Kolchin was wearing his OSS t-shirt.

She posted what appeared to be a throwback photo of her two young sons in New York City on February 4, captioned: ‘How time flies’. 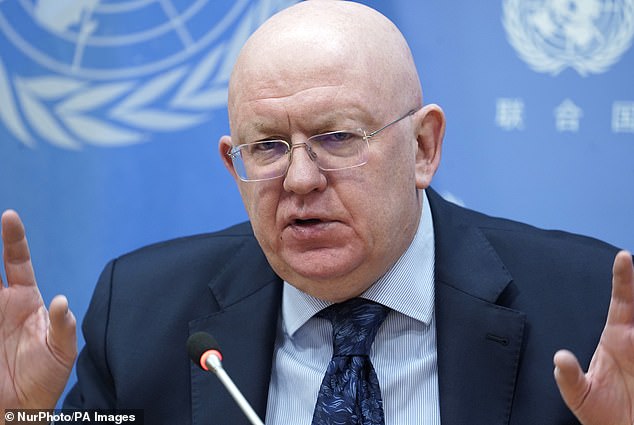 Vassily Nebenzia, the Russian ambassador to the United Nations, continues to insist that Russia is attempting to ‘de-Nazify’ Ukraine 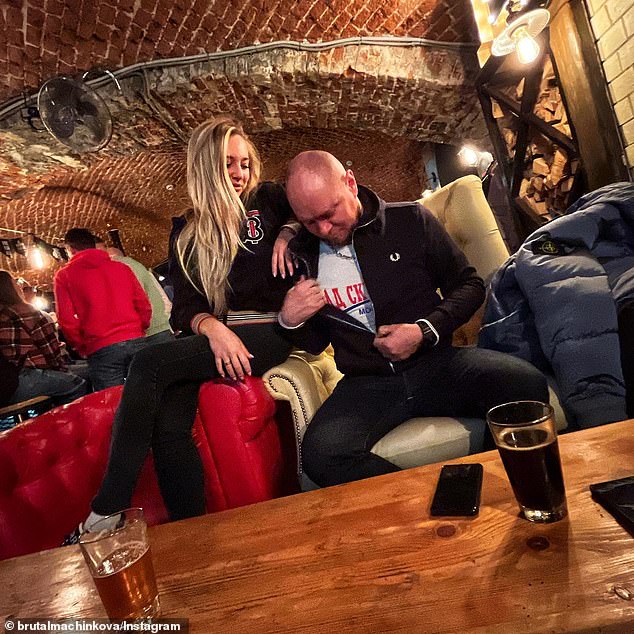 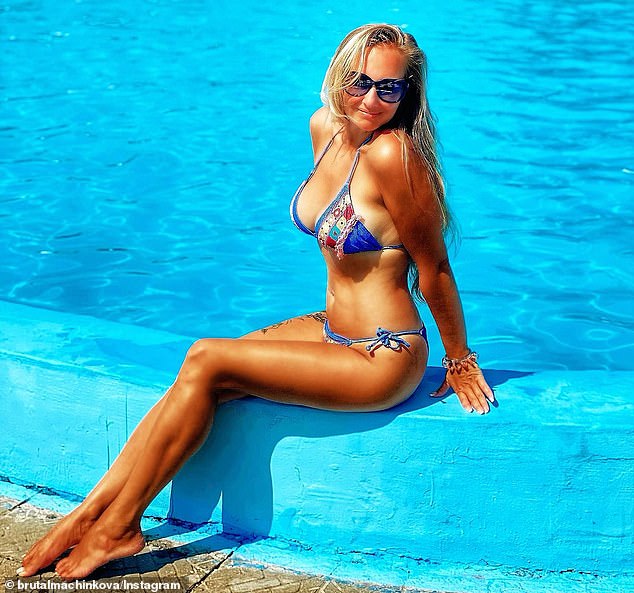 Alena, 33, has not responded to DailyMail.com’s request for comment

It is unclear why Kolchin’s posting was so unusually short. Normally diplomatic staff will spend at least four years in one post, before moving on.

Alena Kolchin is yet to respond to DailyMail.com’s request for comment about her husband’s neo-Nazi beliefs and his actions in New York.

On February 24, the day of the invasion, Ukraine’s president, Volodymyr Zelensky, described Russia’s allegations as absurd.

‘They tell you that we’re Nazis,’ he said.

‘But how can a people that lost 8 million lives to defeat the Nazis support Nazism?

‘How can I be a Nazi? Say it to my grandfather, who fought in World War II as a Soviet infantryman and died a colonel in an independent Ukraine.’

Why does Putin talk about ‘de-Nazifying’ Ukraine?

Vladimir Putin only began to describe Ukraine’s government as Nazis in recent months, but he has long referred to Ukraine’s pro-Western revolution of 2014 as a fascist coup.

In his speech announcing the start of the operation, Putin said that the ‘goal is to protect the people who are subjected to abuse, genocide from the Kyiv regime.’

He added: ‘To this end, we will seek to demilitarize and denazify Ukraine and put to justice those that committed numerous bloody crimes against peaceful people, including Russian nationals.’

Putin’s claim to ‘de-Nazify’ Ukraine was described as absurd by Ukraine’s president.

The message was amplified by Putin’s cronies.

American officials led by President Biden are responsible for the ‘Nazification’ of Ukraine, one of Russia’s top lawmakers said.

While there are undoubtedly far-right groups in Ukraine, as in all European countries – most infamously Ukraine’s far-right Azov Battalion in the military – there is certainly no widespread Nazi ideology in the country’s political leadership.

‘When Putin used the term ‘denazification’ in his declaration of war, he was not speaking to foreign audiences, he was speaking first and foremost to his own public,’ said Izabella Tabarovsky, a senior program associate at the Wilson Center’s Kennan Institute, Washington DC, who studies historical memory and anti-Semitism.

‘It was an attempt to demonize, to create a false equivalence between Ukraine today and Nazi Germany.

‘The subtext of his message was: ‘Look, we are still the good guys here! It’s a war of self-defense! There is a genocide against our people! We are fighting a just war, just as we did in 1941-45!’

‘Dr. Oz never lets me forget that I had a stroke’, John Fetterman says

Bridgerton writer says writing steamy sex scenes was ‘one of the most awkward moments...