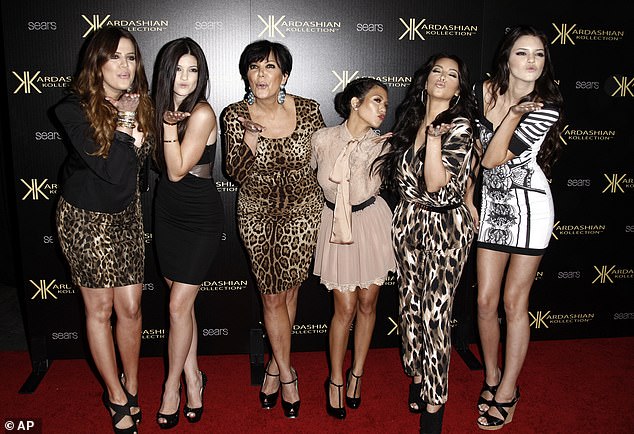 A former assistant editor on Kim Kardashian’s now-defunct app has double down on claims that she barely earned enough to survive while working on the reality star’s project in 2015.

Jessica DeFino, now 32, initially tweeted her disdain for the Kardashian-Jenners in March after billionaire Kim went viral for offering up ‘tone deaf’ advice to women in business, telling Variety: ‘Get your f***ing a** up and work. It seems like nobody wants to work these days.’

Now, in a new piece written for Vice titled ‘I Worked My A** Off for the Kardashian-Jenner Apps. I Couldn’t Afford Gas’, DeFino describes the hardships she claims she faced while working for Whalerock Industries, the digital media company hired by the Kardashian-Jenner siblings in May 2015 to create their apps.

‘I was an assistant editor on the Kardashian Jenner Official Apps, and I didn’t make enough money to make it to work,’ DeFino wrote, adding that she made $35,000-a-year, which left her with barely enough money to fill her gas tank and forcing her to shop at the 99c store for groceries.

Disgruntled: A former assistant editor of now defunct Kardashian-Jenner apps is speaking out again about being underpaid (Khloe, Kylie, Kris, Kourtney, Kim and Kendall seen in 2011)

One day at the pump, DeFino – who was in her mid-twenties at the time – claims she could only fill her tank up to $4, admitting that she was forced to call in sick that day because she couldn’t afford enough gas to make it to the office and back.

‘I panicked, slapped at the steering wheel, and screamed. And then I cried,’ she wrote.

The sisters each launched their own app and reportedly garnered millions of dollars each year through a paid subscription service. More than 600,000 people subscribed to Kylie Jenner’s app alone in the first two days.

The app was estimated to gain $32million per year from the $3 monthly individual fee in just a single year according to TMZ, but the programs finally shut down in 2019.

While working at the company, DeFino claims she had to sell her clothes to consignment shops to pay rent on her studio apartment in East Hollywood and looked into donating plasma and selling her eggs to make more money to survive. 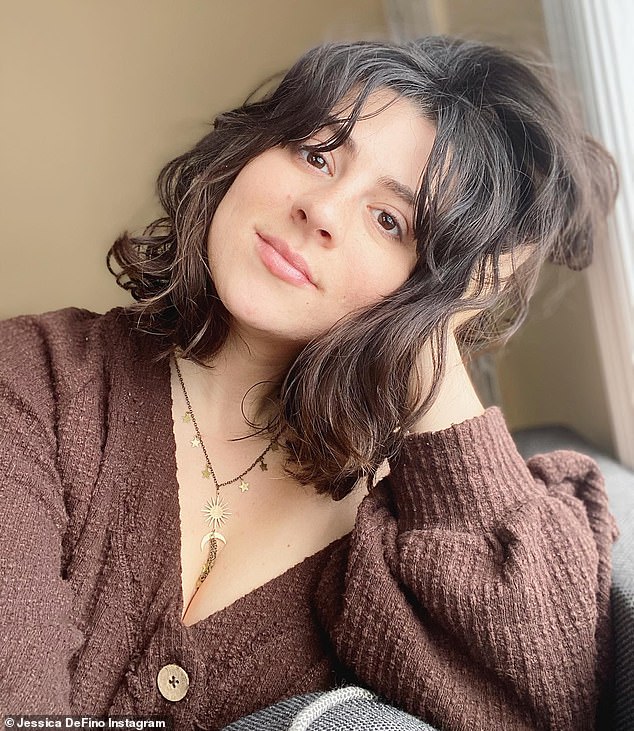 Tough spot: Jessica DeFino (pictured) has written a new piece for Vice titled ‘I Worked My Ass Off for the Kardashian-Jenner Apps. I Couldn’t Afford Gas’

‘When I read Kardashian’s original quote about women not working hard, I thought of the labor I put into launching the Kardashian Jenner Official Apps—days, nights, holidays, weekends, whenever and wherever I was needed. I wasn’t alone,’ she wrote.

She added: ‘I thought of the extra labor I put into stretching my salary. I thought of crying in my car because I wanted to get my f***ing ass up, I wanted to be in that room, I wanted to climb the corporate ladder, whatever. I wanted to. I just couldn’t afford to get there.’

For her Vice piece, DeFino connected with former employees ‘who worked on the apps and two former employees of KKW Beauty, Kim Kardashian’s cosmetics line’ and claims they all ‘described an environment of overwork at the expense of their mental and sometimes physical health, as well as their career advancement.’

A spokesperson for Whalerock told the Post: ‘Jessica DeFino was an at-will employee of Whalerock for 14 months, seven years ago.’ 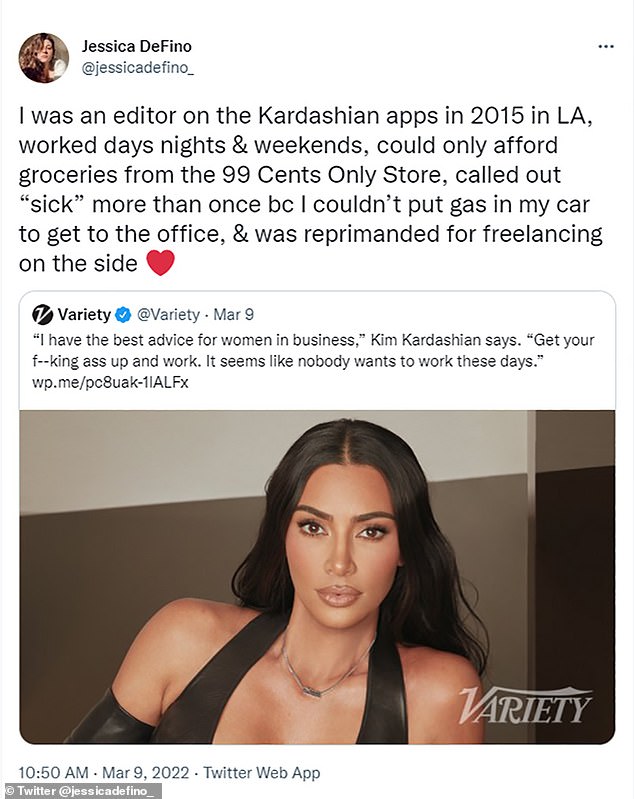 Original tweet: DeFino reveals last month that she was an editor on the Kardashian apps in 2015 in LA

‘Employees at her level were paid a base salary, plus overtime for any additional hours worked, and were eligible for and received bonuses and regular pay raises.’

DeFino also alleged that Whalerock Industries confronted her after they discovered she had been applying for other jobs and writing freelance articles on the side.

‘The company seemed to be surveilling all possible paths to a livable income, from freelancing to finding a new job. I felt manipulated and monitored, paranoid and trapped,’ she wrote.

DeFino – who also alleges she fell into a ‘deep depression’ during her time working for the app – claims to have spoken to other disgruntled staffers.

One of her colleagues, who did not wish to be named, claimed: ‘I worked all the time. I did not sleep enough. I was drinking alcohol — way too much alcohol — to deal with the stress. I became physically unwell. My hair was falling out.’ 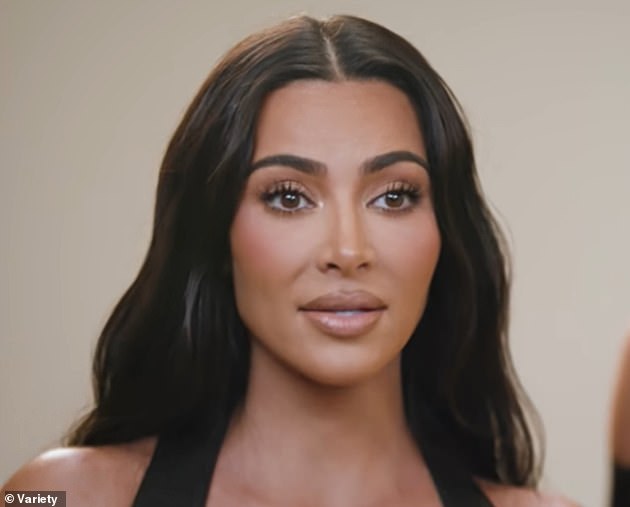 In her original tweet last month, DeFino wrote in response to Kim’s viral Variety quote: ‘I was an editor on the Kardashian apps in 2015 in LA, worked days nights & weekends, could only afford groceries from the 99 Cents Only Store, called out ‘sick’ more than once bc I couldn’t put gas in my car to get to the office, & was reprimanded for freelancing on the side.’

It triggered a strong reaction at the time, including one from Kim’s former unpaid intern spoke out on Twitter claiming: ‘I worked my little college a** off for free for Kimberly,’

Celene Zavala, a programming director at CNN+ who worked as an unpaid intern assistant to Kardashian, retweeted Kardashian’s advice for women detailing her time working for the reality star.

Zavala added, ‘So I better get some addendum in her saying “except Celene, she was amazing.’

The journalist also retweeted a post from writer and critic Jessica DeFino, who tweeted about how she could barely fill her car with gas to get to work while working on the Kardashians app in 2015, before she was ‘reprimanded for freelancing on the side’ to make ends meet.

Since making the comments, Kim has attempted to clarify things by saying it was taken out of context.

‘That statement that I said was without questions and conversation around it and it became a sound bite really with no context,’ Kim said last month in an interview with Good Morning America.

‘And [in] that sound bite, I came off the notion and the question right before — which was ‘after 20 years of being in the business, you’re famous for being famous.’ 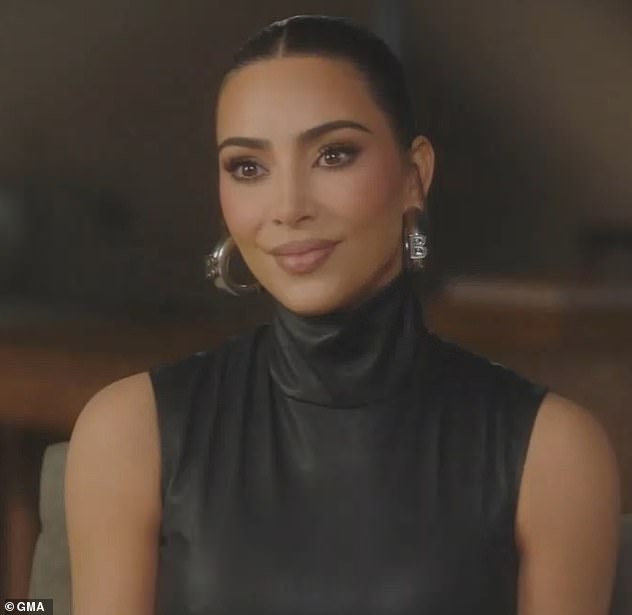 Explanation: Kim appeared on Good Morning America to clarify her comments about working hard last month, and claimed her comments had been taken out of context 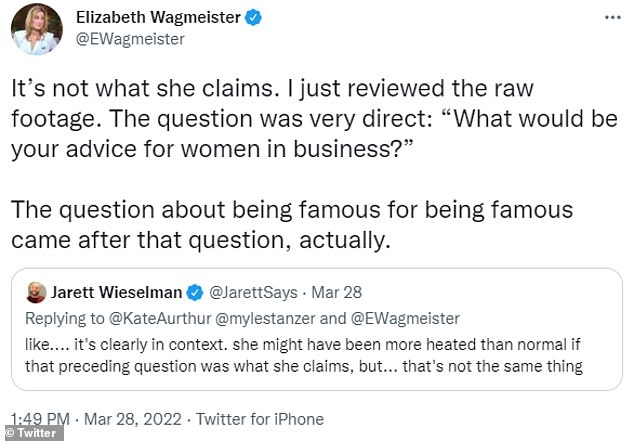 Variety’s Chief Correspondent, Elizabeth Wagmeister – who conducted the interview – has now hit back at Kardashian, 41, insisting that she was asked ‘a very direct question’

Kim claimed that her back was up during the interview when someone had mentioned that people believe her family are ‘famous for being famous.’

‘The advice that I would give is just that, having a social media presence and being on a reality show does not mean overnight success,’ Kim explained.

‘And you have to really work hard to get there, even if it might seem like it’s easy, and that you can build a really successful business off of social media. You can if you put in a lot of hard work.’

However, Variety writer Elizabeth Wagmeister who interviewed Kim furiously fired back at the reality star’s claims that her comments were ‘taken out of context’ by the publication.

Wagmeister insisted that the billionaire businesswoman was asked a ‘very direct question’ and that the ‘question about [her] being famous for being famous’ was actually posed after she offered up her advice to women in business.

‘It’s not what she claims,’ Wagmeister tweeted. ‘I just reviewed the raw footage. The question was very direct: ‘What would be your advice for women in business?’ The question about being famous for being famous came after that question, actually.’

Kim faced further embarrassment last month when her controversial advice was dragged into the spotlight by Oscars hosts Wanda Sykes and Regina Hall.

The presenters poked fun at Kim’s statements as they jokingly offered advice to Dame Judi Dench after she missed out on the Best Supporting Actress Award to Ariana DeBose.

Finding Judi, 87, in the audience, Regina said: ‘Dame Judi Dench… we have an inspirational quote for you.’

Comedian Wanda added: ‘You know because you didn’t win tonight.’

Kim’s sister Kourtney was in the audience when the joke was made as she attended the ceremony alongside her boyfriend Travis Barker who performed as part of the All Star band.

Mom DANCES with five of her kids in series of doting clips – before...