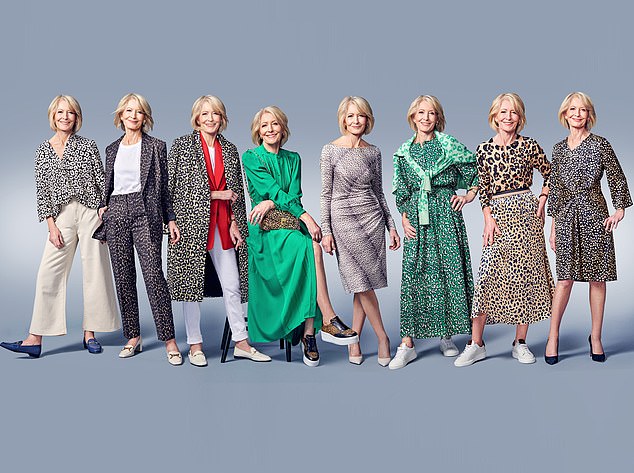 They say a leopard never changes its spots. But how we view those spots? Well, that depends on the fickle favours of fashion.

For decades, we’ve stereotyped leopard print as belonging to the Bet Lynch school of dressing, something to be accessorised with a beehive, oversized earrings and any other leopard-print items you could manage.

It had become synonymous with brassiness and brashness, and frankly had become rather embarrassing to wear.

But I’ve always loved leopard print. Years ago, I had a slinky leopard-print dress from LK Bennett that I adored. I wore it while giving talks, having supper with friends, and even for the odd smart lunch. To my mind, leopard print had that special something — a certain animal magnetism that always made me feel I could hold my own.

I’ve always loved leopard print. To my mind, leopard print had that special something — a certain animal magnetism that always made me feel I could hold my own

But since Corrie harridan and Tory wife didn’t really mesh, it was with regret that I relegated my dress to the back of the wardrobe. But now leopard print is having another moment in the sun. Walk down any High Street and it will soon become clear that it is very much back in vogue.

Just look in the window of middle-class favourite Marks & Spencer, where every item of clothing can be bought covered in spots — and in a range of colours, too. It’s the same at Zara, Jigsaw and the more upmarket Me+Em.

Serving as a cooler, edgier alternative to florals, while still maintaining a sense of stature, there’s nothing brash or blingy about this ‘new’ leopard print.

It manages to adapt almost effortlessly according to the occasion, and comes in a range varying from dainty spots the size of your fingernail to bold splodges.

And while its previous iteration seemed the solid reserve of the middle-aged woman, now — whether you’re in your 20s or your 80s like me — you’ll find a version that works without making you look either aged or like mutton dressed as lamb. The navy Jigsaw blouse seen here on the far left serves as an elegant re-entry to the world of leopard print.

But I also felt chic and confident in the trouser suit from All Saints, which showed that a darker, more muted leopard print can look just as classy as plain brown.

While it’s quite a full-on look, this suit is well cut and much easier to wear than I’d expected.

It feels relaxed, worn with a plain T-shirt, but would work at a smart restaurant or for a trip to the theatre — and it can certainly hold its own in the boardroom, worn with gold jewellery and a pair of heels.

The crisply defined black and white leopard print of the Jigsaw summer coat, which looks sharp and sassy thrown casually over the shoulders, is another example of how leopard print is perfect for day-to-night dressing.

While I teamed it here with a white T-shirt, classy white jeans and a well-cut red jacket, it would move effortlessly into evening, worn with black trousers and colourful sweater or silk shirt.

Of course, leopard print needn’t form the bulk of your outfit. Teamed with an emerald maxi dress, the beautiful gold-link chain leopard handbag and funky leopard wedge trainers — both from Russell & Bromley — really bring the look together, adding that extra bit of pzazz without being overpowering.

A leopard-print cardi will look great worn over a floaty dress on chilly days, and I should know, because my daughter — who’s wonderful at keeping me up to the fashion mark and always chooses brilliantly ageless things — gave me this gorgeous cool mint-green number with darker green leopard splodges, from Kemi Telford, for my last birthday.

Like the darker green dress from Joules, which I’ve teamed it with above, it proves that leopard print doesn’t have to be predictable.

As well as greens and blues, you can also buy leopard in reds, pinks and oranges, meaning whatever your taste, there’s a style that works for you. 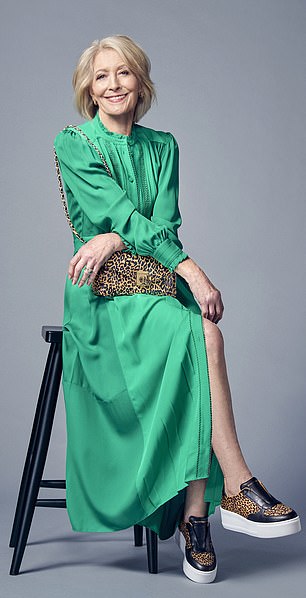 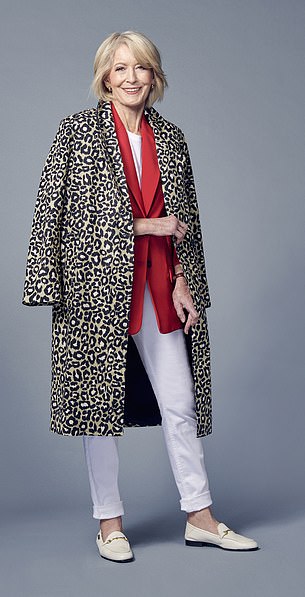 However, for those who favour a more traditional leopard print hue, Marks & Spencer’s leopard cardigan makes a great duo with the leopard-print skirt from Wyse, though both would work well individually, teamed with a plain item in a contrasting shade.

Because far from looking cheap or brassy, from the Hugo Boss dress to my own stalwart frock, wearing leopard print made me feel my very best — and all my friends had better prepare for its many outings this summer.

One in five Russians killed are OFFICERS as Putin’s army is forced to send...