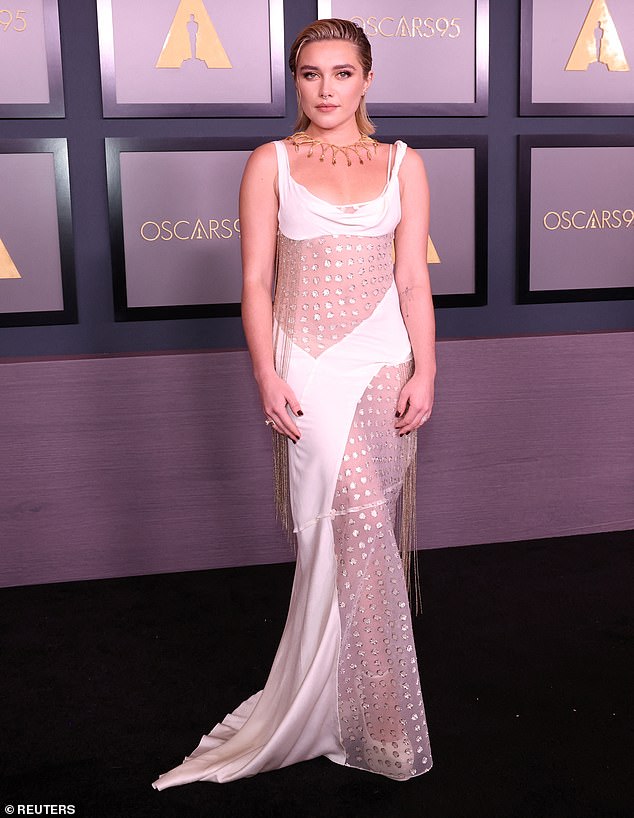 The Little Women actress, 26, opted for elegance in a semi-sheer white gown as she stepped onto the same glamorous red carpet with newly single Olivia Wilde.

The two actresses were in attendance at the Hollywood ceremony following the recent Don’t Worry Darling drama and the ‘stolen kiss’ Florence allegedly shared with Olivia’s now ex, Harry Styles.

The talented beauty was stunning as she posed for various photos at the annual awards gala.

She donned a long, white gown from the Victoria Beckham Spring 2022 collection, that was comprised of both satin and sheer material throughout the ensemble.

The see-through fabric contained silver polka-dot patterns while a strip of thicker, satin material stylishly draped on the front and around the back.

For an additional touch of elegance, a short train could be seen resting behind the actress on the red carpet. 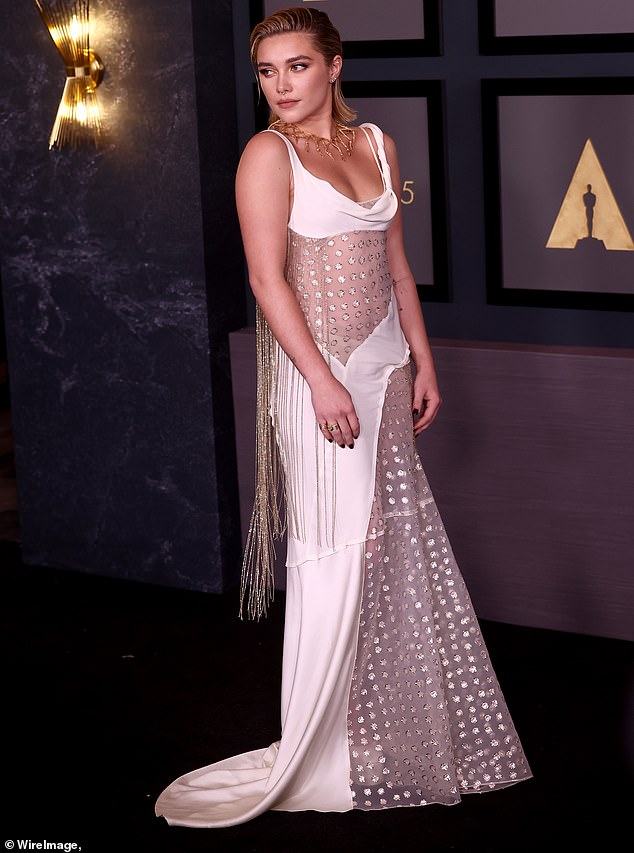 Glammed up: The talented actress opted for a gown that flowed down towards the floor and was comprised of both satin and sheer material 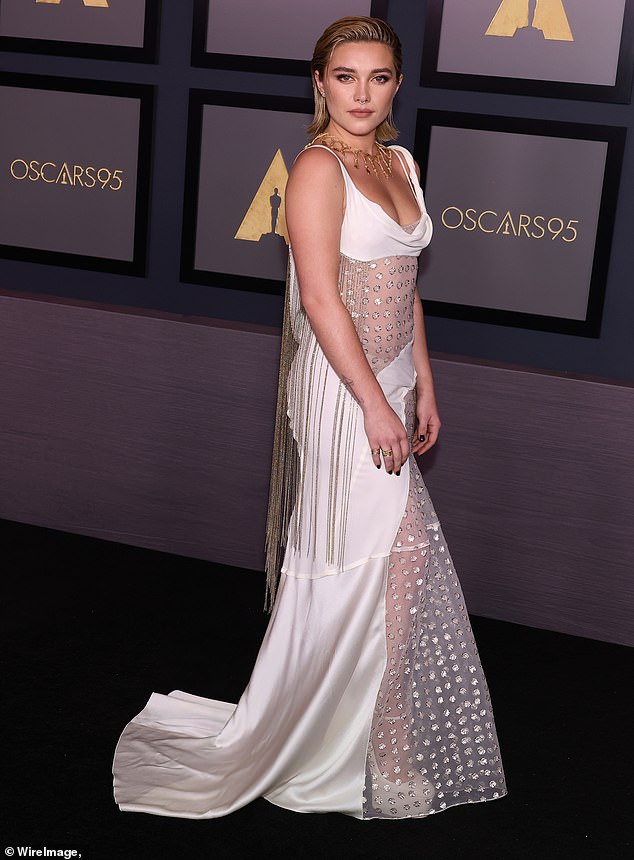 A pop of color: The eye-catching dress contained gold rhinestone tassels that flowed down from the fabric on the sides and back

For a pop of color to the dress, gold rhinestone tassels were additional features on the sides and back of the ensemble.

Florence was able to secure the gown by tying strings of fabric into a small bow behind her. She slipped into a pair of white, platform heels with a thin strap around the ankles that could be seen through the sheer fabric.

To coincide with the tassel embellishments, the talented opted to wear a large, gold necklace. A pair of small silver earrings and an assortment of gold rings were also donned to accessorize the look.

Her short, blonde hair was stylishly and effortlessly slicked back, allowing the tips to barely brush her shoulders.

Florence posed on the same red carpet as her previous director, Olivia Wilde, following the star’s split with Harry Styles and the recent Don’t Worry Darling drama that took over the media. 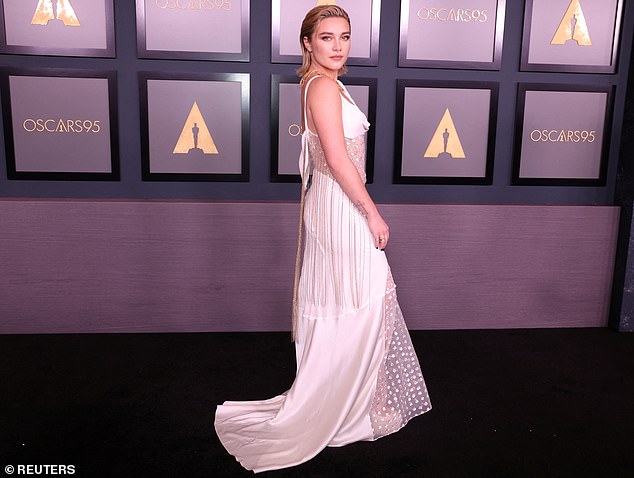 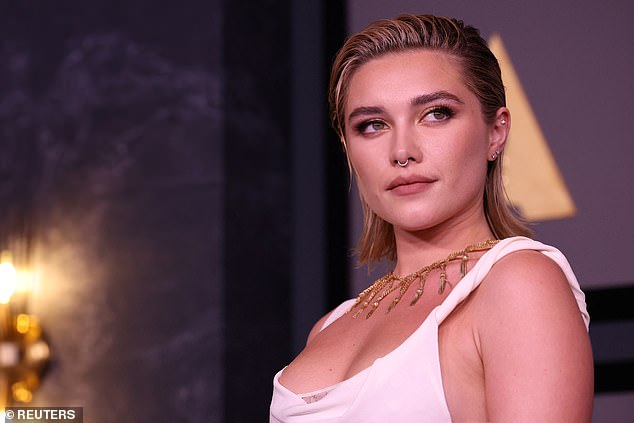 Close-up: The beauty donned a layer of black mascara, gold shimmery eyeshadow and nude-colored lipstick as her main choices of makeup for the evening 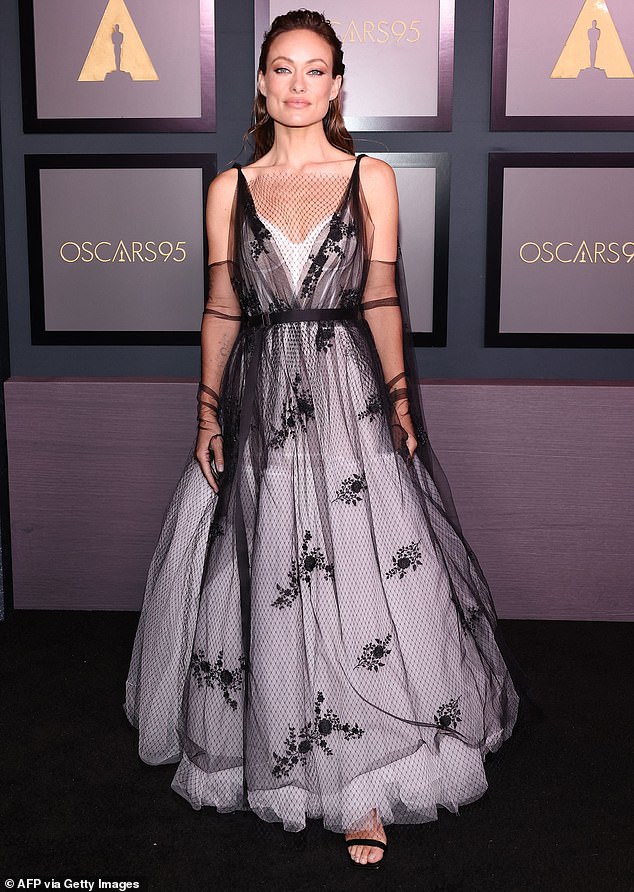 The film was engulfed by numerous rumors, especially closer to the movie’s release date on September 23.

Between Olivia and Florence, the two allegedly didn’t get along behind-the-scenes on set while shooting the project.

However, in an interview published by Vanity Fair earlier in September, the House alum had only positive words to say about the talented actress.

‘Florence’s performance in this film is astounding. It’s just baffling to me that the media would rather focus on baseless rumors and gossip, thereby overshadowing her profound talent,’ she had informed the publication.

Other rumors swirled around, including how Shia LaBeouf exited the project. Harry notably took over the role once the actor was no longer apart of the film. Initially, Shia reportedly had to leave the film due to scheduling conflicts.

Enjoying the night: Florence was seen sending a smile as she joined in on a conversation amid the dinner gala 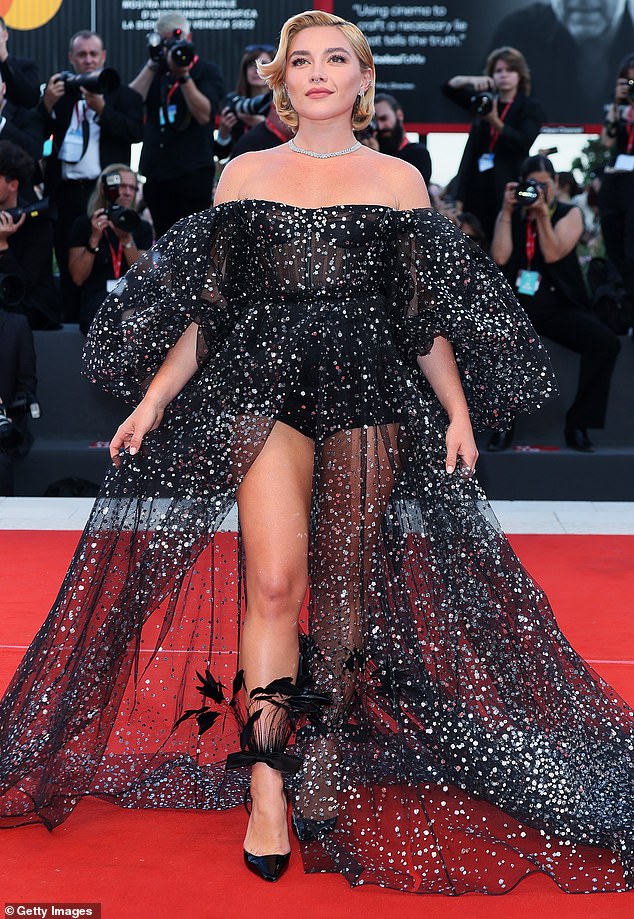 Rumored drama: Florence posed on the same red carpet as her previous director and co-star, Olivia Wilde, following the star’s split with Harry Styles and the recent Don’t Worry Darling drama; the actress seen in September at Venice Film Festival

Later in September, Olivia claimed she had fired Shia, which he refuted. The actress-turned-filmmaker told Vanity Fair, ‘All I’ll say is he was replaced, and there was no going forward with him.’

Earlier in September, the Midsommar actress didn’t make appearances during press and photo calls for Don’t Worry Darling, fueling rumors that there were issues unresolved between Olivia and Florence.

Florence reportedly had her own scheduling conflicts, and was in the middle of filming, Dune: Part Two, resulting in her inability to attend the press in Venice.

The beleaguered film, in which Styles and Pugh play a married couple, was overshadowed by a series of controversies both before and after its memorably awkward premiere at the Venice Film Festival in September.

Pugh failed to acknowledge Wilde on the red carpet following an on-set dispute – thought to be sparked by the actress’s discomfort at her director embarking on a very public relationship with Styles while shooting the film on location in Los Angeles. 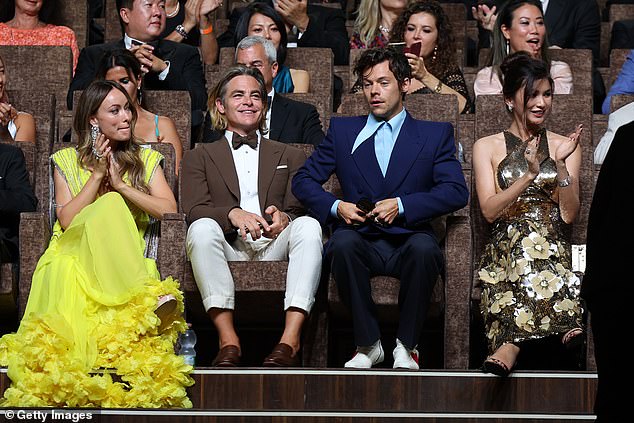 Split: On Friday, Oliva and Harry called it quits on their nearly 2-year relationship, with various sources informing People that the two were, ‘taking a break’; Olivia and Harry seen in September at Venice Film Festival

On Friday, Oliva and Harry called it quits on their nearly 2-year relationship, with various sources informing People that the two were, ‘taking a break.’

‘He’s still touring and is now going abroad. She is focusing on her kids and her work in L.A. It’s a very amicable decision,’ another insider stated.

Last month, it was reported Florence and Harry shared an offscreen kiss after developing ‘instant chemistry’ on the set of Don’t Worry Darling – weeks before the One Direction star began a relationship with Olivia.

Sources have claimed their fall-out stems from the initial chemistry shared by Pugh and her screen husband before he became romantically involved with Wilde.

An insider told The Sun: ‘Harry and Florence had chemistry from the off, which translated incredibly well on-screen. One night they had a bit of a snog, all very light-hearted and a bit of fun, and that was that.’

‘It was being gossiped about by a couple of members of production, otherwise no one would have known. Harry was very much single at the time and Florence had separated from Zach Braff, although she’d kept the split quiet to — ironically — avoid headlines.’ 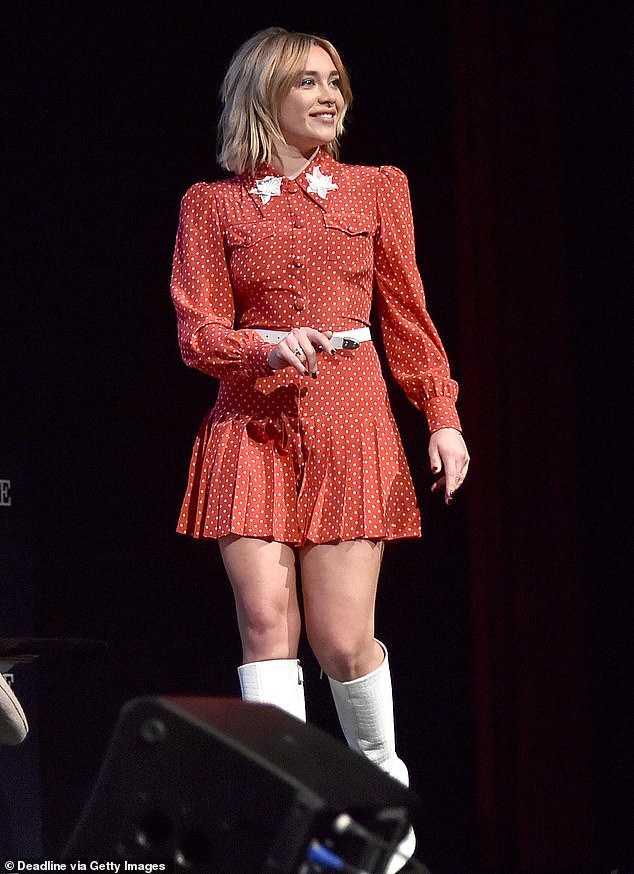 Kind words: Olivia continued to shut down rumors of a feud with Florence, and told Vanity Fair, ‘It’s just baffling to me that the media would rather focus on baseless rumors and gossip, thereby overshadowing her profound talent.’; the Little Women actress seen in November in LA

Good spirits: Both Florence and Olivia appeared to be in high spirits while attending the ceremony earlier Saturday to support fellow industry leaders

Despite past rumored feuds and Olivia’s recent split, both the talented stars appeared to be in high spirits while attending the ceremony earlier Saturday to support fellow industry leaders.

‘The Governors Awards is an annual event celebrating awards conferred by the Academy’s Board of Governors – the Irving G. Thalberg Memorial Award, the Jean Hersholt Humanitarian Award and the Honorary Award,’ reads the ceremony’s official website.

The recipients are revealed each summer ahead of the November event, where they are honored at the dinner gala.

Michael launched the Michael J. Fox Foundation in 2000, which has raised around $1.5 billion, to further fund research for Parkinson’s Disease.

The Back To The Future alum was diagnosed with the disorder in 1991, but didn’t officially go public with the news until 1998.