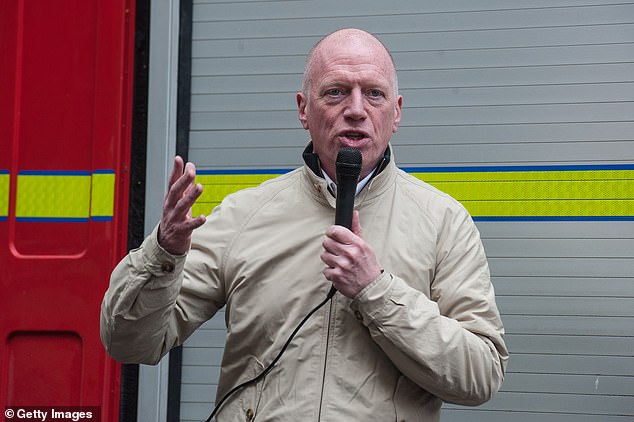 Firefighters will vote on strikes after rejecting 5% pay deal – as thousands of nurses, civil servants, bus and train drivers are set to walkout this winter

Firefighters will vote on strike action after rejecting a 5 per cent pay deal, the Fire Brigades Union (FBU) announced.

The FBU said on November 14, that members voted by 79 per cent against the offer and now the union will hold a ballot on industrial action.

The last time firefighter went on strike was in 2002 in an attempt to secure better salaries.

It comes amid a wave of industrial action across the public sector and amongst key workers – with nurses, civil servants, train drivers and postal workers all balloting for action or going on strike in recent weeks.

The Royal College of Nursing (RCN) encouraged its 300,000 members to back strikes over the Government’s ‘insulting’ pay offer — which amounts to roughly 4 per cent, or £1,400.

It confirmed last week that around 100 hospitals in England will be affected by the disruption.

Hundreds of thousands of nurses are set to walk out across the UK before Christmas in a bid for a 17.6 per cent pay rise and better working conditions.

Around 100,000 civil servants also voted to strike this week in a dispute over pay, pensions and jobs.

Chancellor Jeremy Hunt has been reported to be considering a limit on public sector pay rises to just 2 per cent in 2023/24, a move which would see a real terms pay cut as inflation hovers around 10 per cent.

The Chancellor’s Autumn statement will reveal all on Thursday, but he has warned Brits that he will have to make ‘horrible’ decisions as he tries to rescue the economy.

FBU general secretary Matt Wrack, said after the news was announced: ‘FBU members have spoken’. Pictured here at a rally earlier this month

Public sector workers’ pay will only be decided next year, with the Chancellor set to give an outline this week of what different departments will be able to afford.

Scott Morrison censure: How former PM is defending himself as House prepares to censure him

Jinger Duggar spotted for first time since brother Josh Duggar was sentenced to 12...

San Antonio cop who shot teen boy, 17, is charged with two counts of...