Tall fencing started going up around the Supreme Court in northeast Washington, D.C. on Wednesday evening as tensions rose between protesters following the leak of a draft opinion that signaled an impending overturn of Roe v. Wade.

Workers erected the massive fencing around the perimeter of the marble building just east of the U.S. Capitol building as Justices began canceling public appearances amid warnings protests could get increasingly violent.

Left-wing groups are planning to send activists and protesters to the homes of conservatives justices.

An activist group called ‘Ruth Sent Us’ has published the supposed addresses of Justices Samuel Alito, Clarence Thmas, Neil Gorsuch, Brett Kavanaugh, Amy Coney Barrett and Chief Justice John Roberts and are planning a ‘walk-by’ of their homes next Wednesday, May 11.

‘Our 6-3 extremist Supreme Court routinely issues rulings that hurt women, racial minorities, LGBTQ+ and immigrant rights,’ the group’s website reads. ‘We must rise up to force accountability using a diversity of tactics.’

Politico published on Monday evening what appeared to be a photocopy of a draft opinion from February 4 in the case of Dobbs v. Jackson Women’s Health Organization – the opinion by conservative Justice Alito would put an end to the 50-year landmark abortion ruling giving women a constitutional right to terminate their pregnancies.

In the fallout from the leak, Alito scrapped plans to participate in the 5th Circuit Court of Appeals judicial conference starting on Thursday, as the associate justice is tasked with reviewing emergency appeals from the 5th Circuit.

It is still unclear if Chief Justice Roberts and Justice Clarence Thomas, who were slated to get remarks at a similar conference for the 11th Circuit on Thursday and Friday, will still appear.

Workers erect massive fencing around the perimeter of the Supreme Court building on Wednesday May 4, 2022 in the fallout of the leak showing an impending overturn of Roe v. Wade 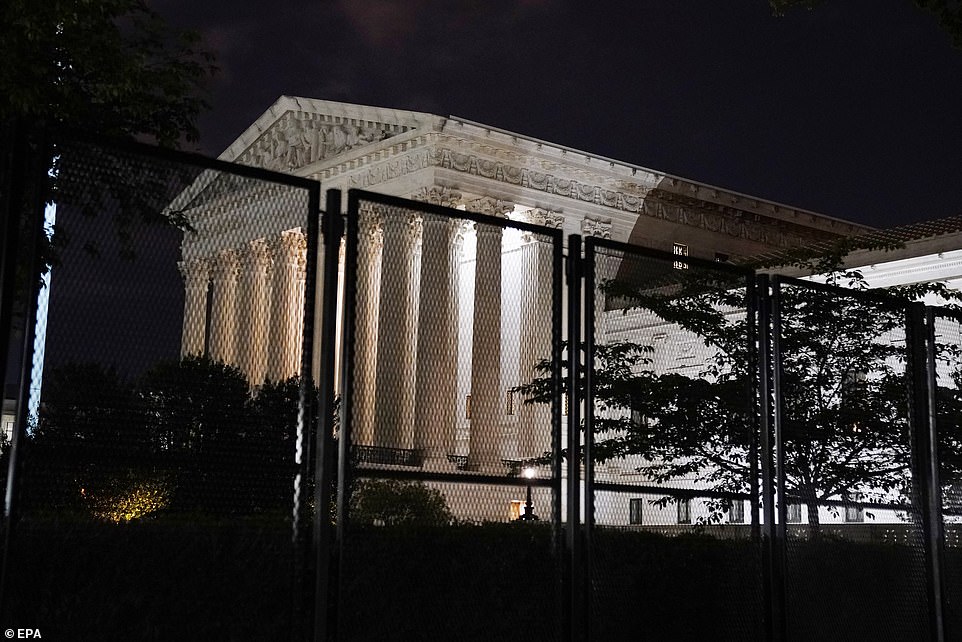 The fencing put up on Wednesday night is similar to what was put up around the U.S. Capitol following the January 6, 2021 riot 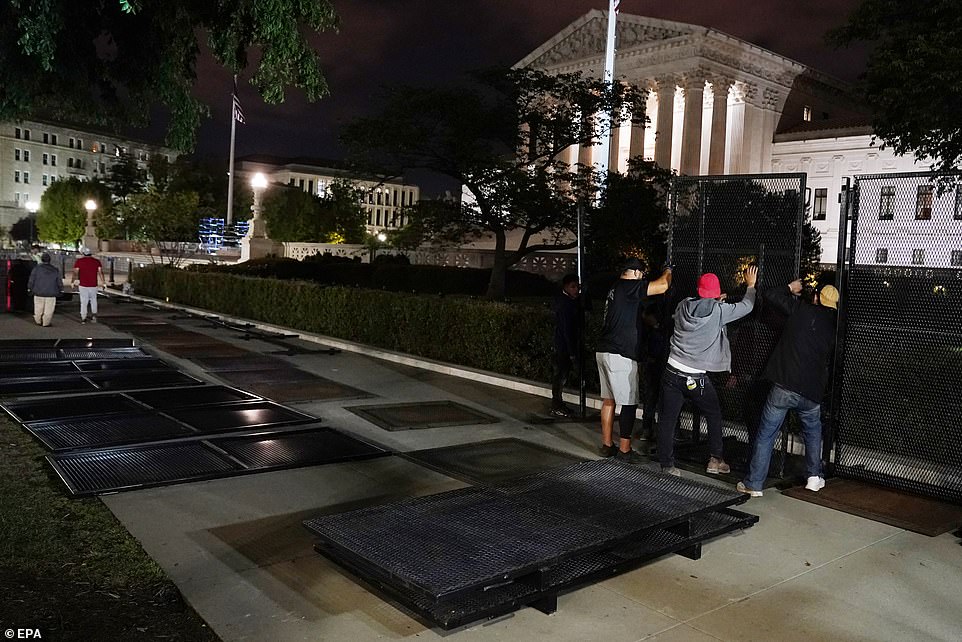 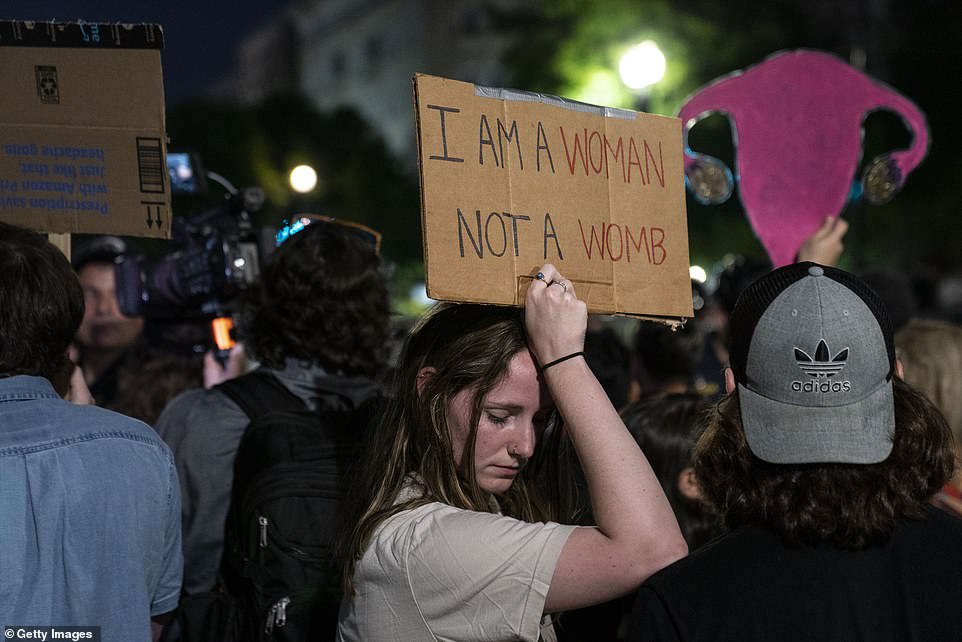 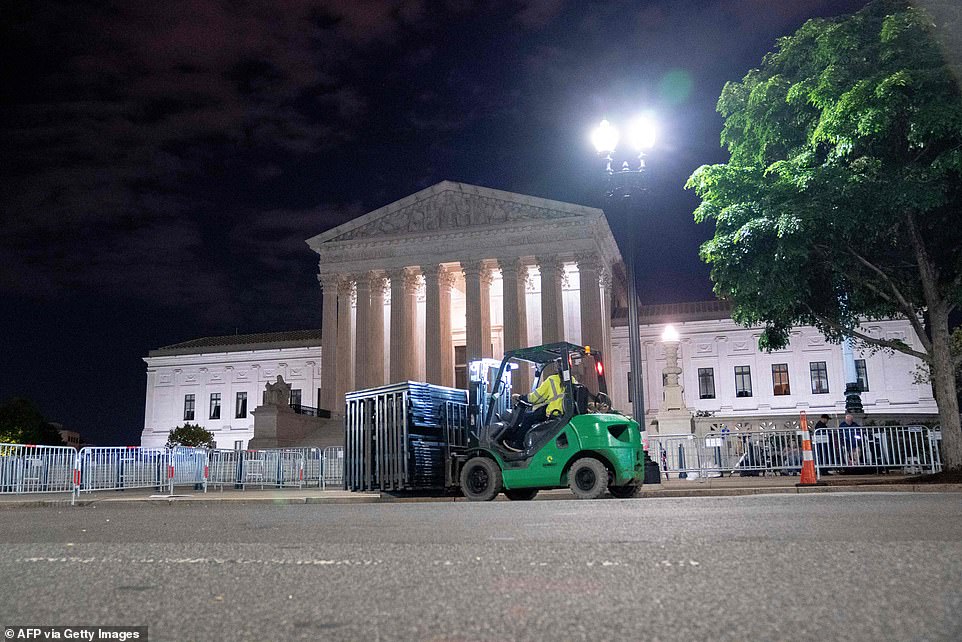 Immediately after the leak was published on Monday evening, pro-abortion protesters descended on the Supreme Court.

On Tuesday, conservative Chief Justice Roberts confirmed the authenticity of the draft opinion and ordered an investigation into the leak by Col. Gail A. Curley, the 11th marshal of the United States Supreme Court.

Fencing to keep protesters away from the entrances of the Supreme Court is similar to what was erected around the U.S. Capitol following the January 6, 2021 riot.

Although D.C. is ground zero for the demonstrations, law enforcement authorities across the country are preparing for possible violence and civil unrest.

According to intelligence bulletins and internal reports from across the nation obtained by Yahoo News, authorities are on alert for fallout from the impending ruling. 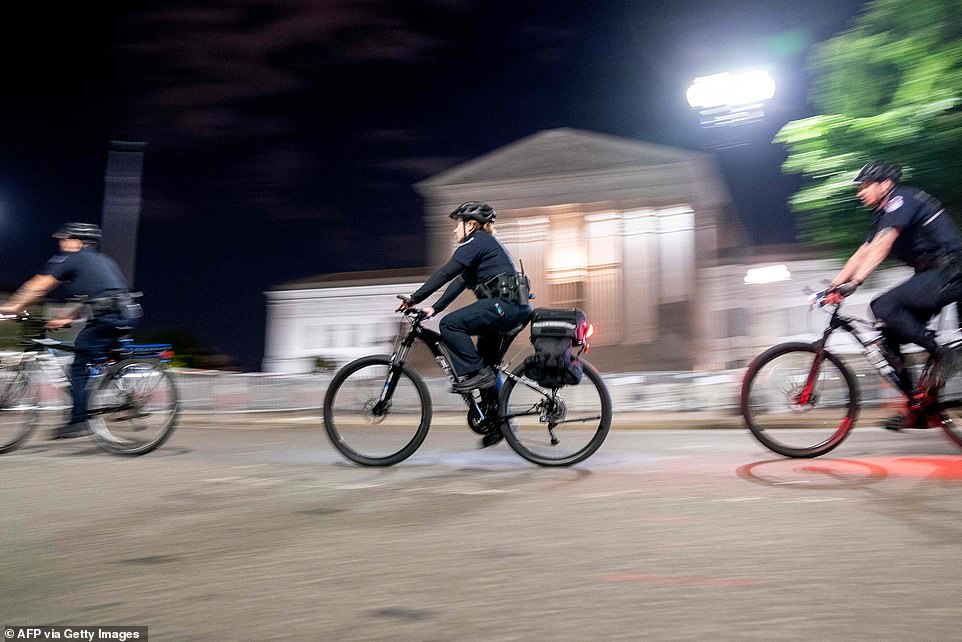 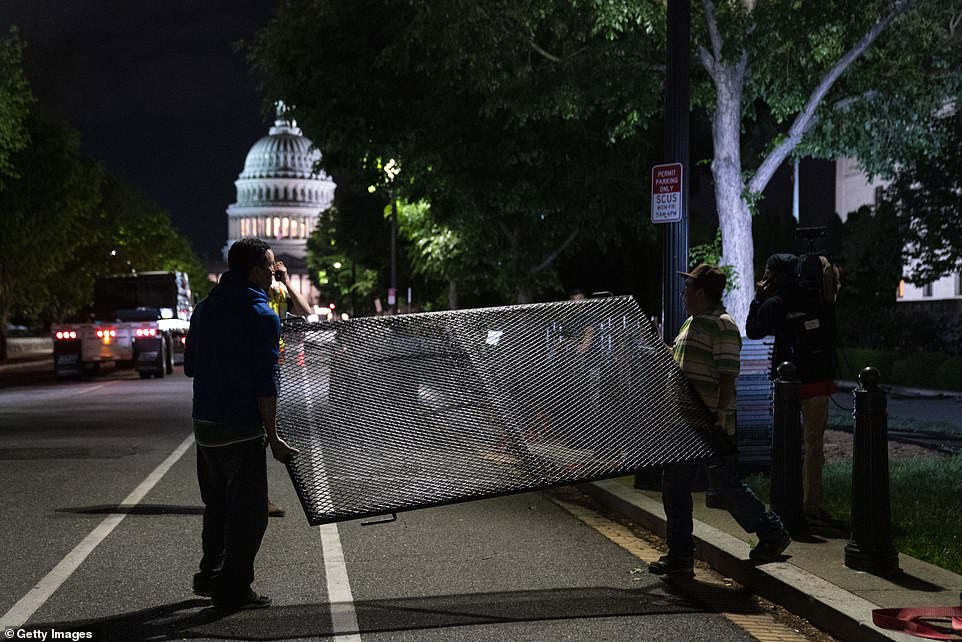 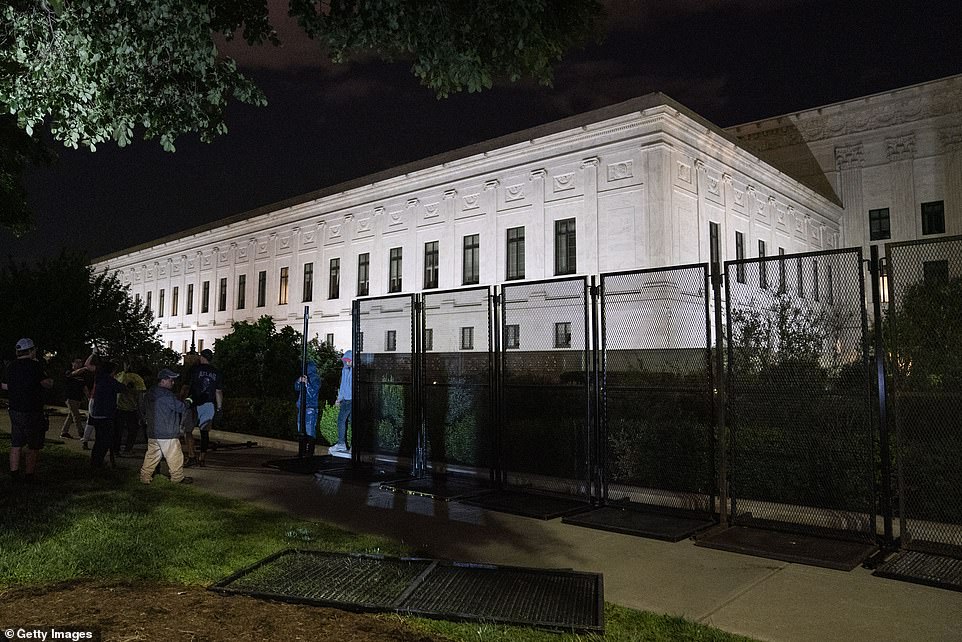 The fencing encompasses the entire perimeter of the Supreme Court 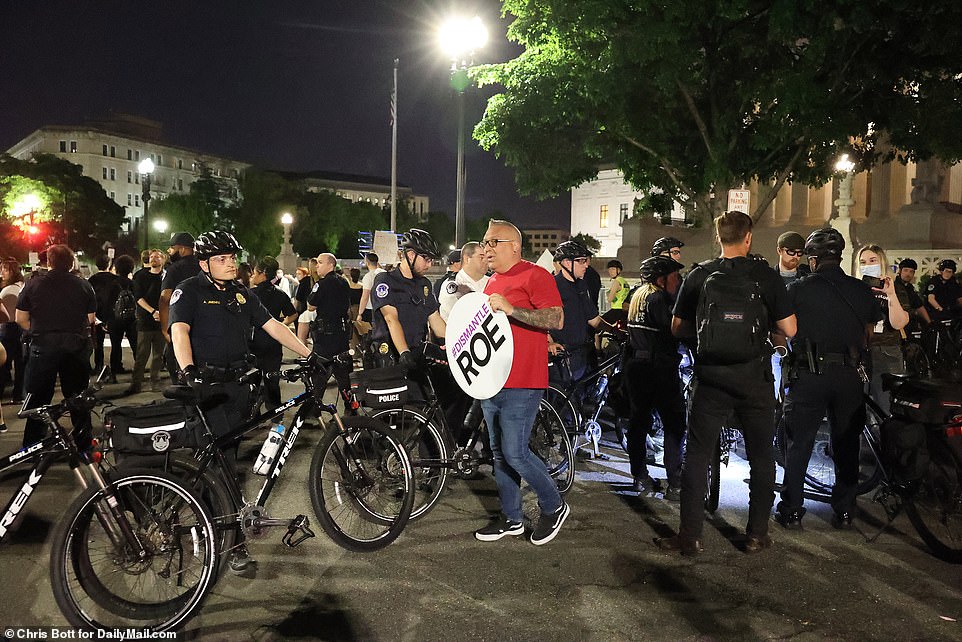 ‘Law enforcement and public safety officials should anticipate an increase in abortion-related events, rallies, and protests with the potential for violence and criminal activity, particularly leading up to and directly following the Supreme Court’s decision in the Mississippi case,’ the bulletin noted.

A decision on the Mississippi case Dobbs v. Jackson Women’s Health Organization is expected by June.

For years the FBI has tracked extremists on both sides of the abortion issue.

The bureau’s Domestic Terrorism Reference Guide on Abortion-Related Extremists was widely circulated in November 2021 and looks at the threats stemming from both sides of the heated argument.

‘Abortion-related violent extremists seek to further their pro-life or pro-choice ideologies through the threat or use of force or violence against individuals or facilities which provide services in opposition of their beliefs,’ the guide notes. 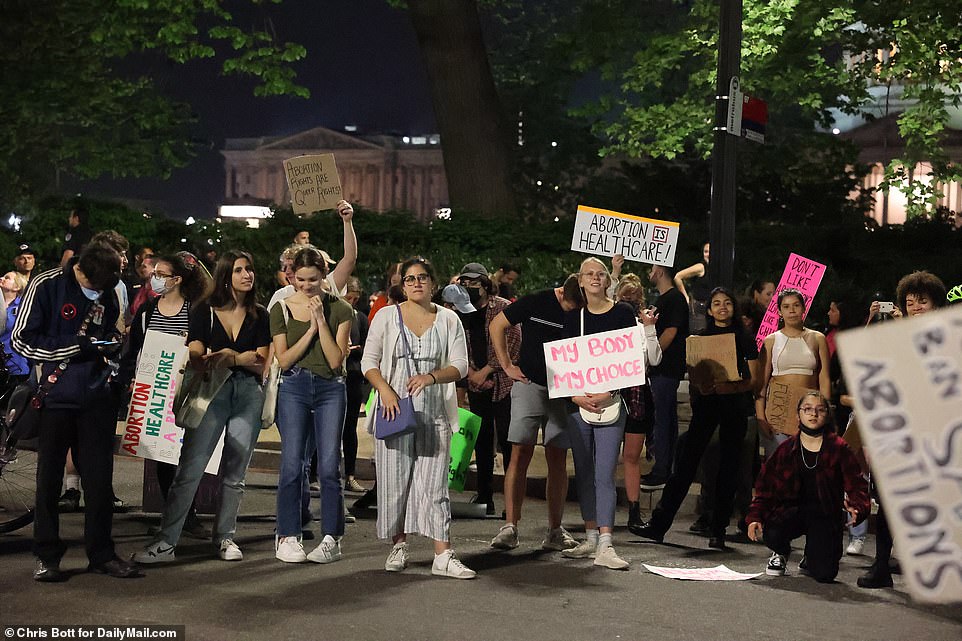 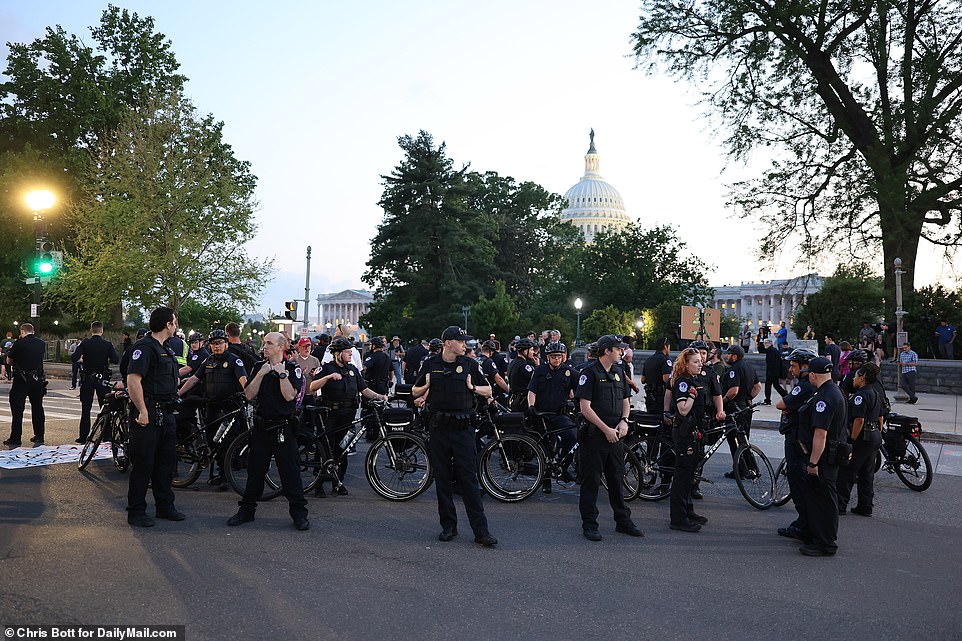 Police units across the country are on high alert for civil unrest and potential violent incidents related to the impending  abortion ruling. Pictured: Police monitor abortion-related protests outside the Supreme Court on Wednesday, May 4

While Republicans are pleased with the content of the draft opinion, they are furious over the leak.

‘Last night’s stunning breach was an attack on the independence of the Supreme Court ,’ Senate Republican Leader Mitch McConnell said in a Tuesday statement calling for the leaker to be brought to justice. ‘By every indication, this was yet another escalation in the radical left’s ongoing campaign to bully and intimidate federal judges and substitute mob rule for the rule of law.’

When speaking at a press conference on Capitol Hill, McConnell slammed the press for focusing their coverage on the contents of the leaked draft opinion and not the astounding and unprecedented fact that a Supreme Court document was leaked in general.

‘I think the story today is an effort by someone on the inside to discredit the institution of the Senate, which continues a pattern that we’ve observed over the last several years,’ the leader explained. 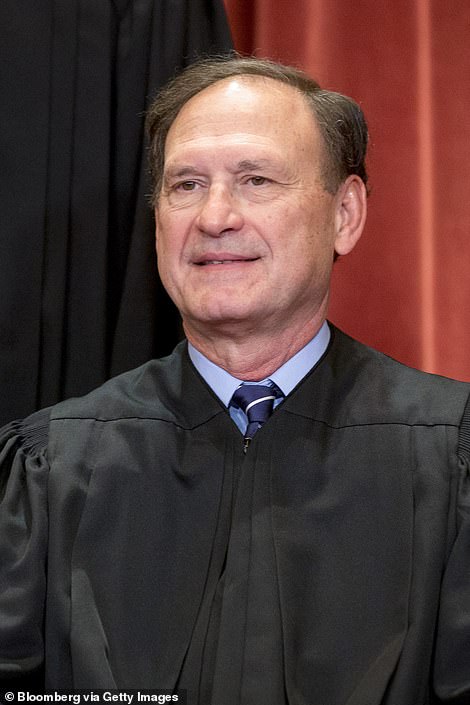 The opinion draft was written by Justice Samuel Alito. He canceled a public appearance on Thursday amid fallout from the leak

‘What’s unique about today,’ McConnell continues, ‘is this is the first time that we’ve had someone on the inside try to attack the institution.’

He reminded the press, ‘You need – it seems to me, excuse the lecture – to concentrate on what the news is today. Not a leaked draft, but the fact that the draft was leaked.’

Democrats, on the other hand, are not worried about the breakdown of usual Supreme Court practice or catching the leaker and instead are calling for codification of Roe v. Wade.

President Joe Biden vowed to protect women’s rights to an abortion should the decades-old ruling be overturned.

Vice President Kamala Harris furiously lashed out at Republicans for trying to ‘deny women their freedoms’ in remarks Tuesday evening after a Supreme Court leak showed a conservative draft opinion that would overturn Roe v. Wade.

In her first appearance after testing positive for COVID-19 last month, Harris was ironically speaking to gala attendees for EMILY’s List – a political action committee that aims to get Democratic female candidates election who are favor of advancing abortion rights.

Her remarks came 24 hours after the Supreme Court leak. 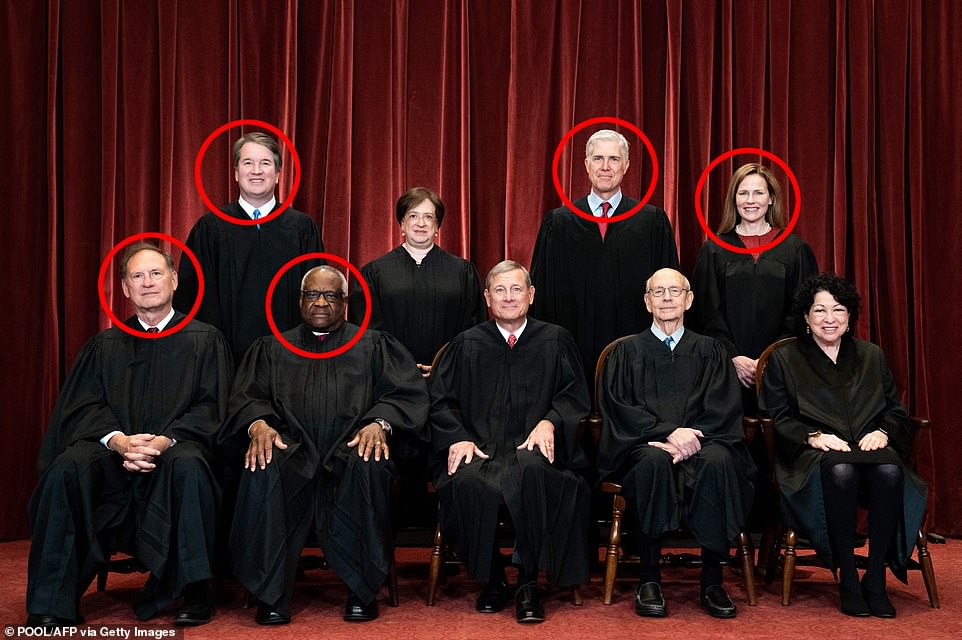 If Chief Supreme Court Justice John Roberts (center bottom) votes with liberals against overturning the landmark abortion case, the five remaining conservative justices (circled in red) will still have the numbers to reverse the decision with a 6-3 conservative majority bench 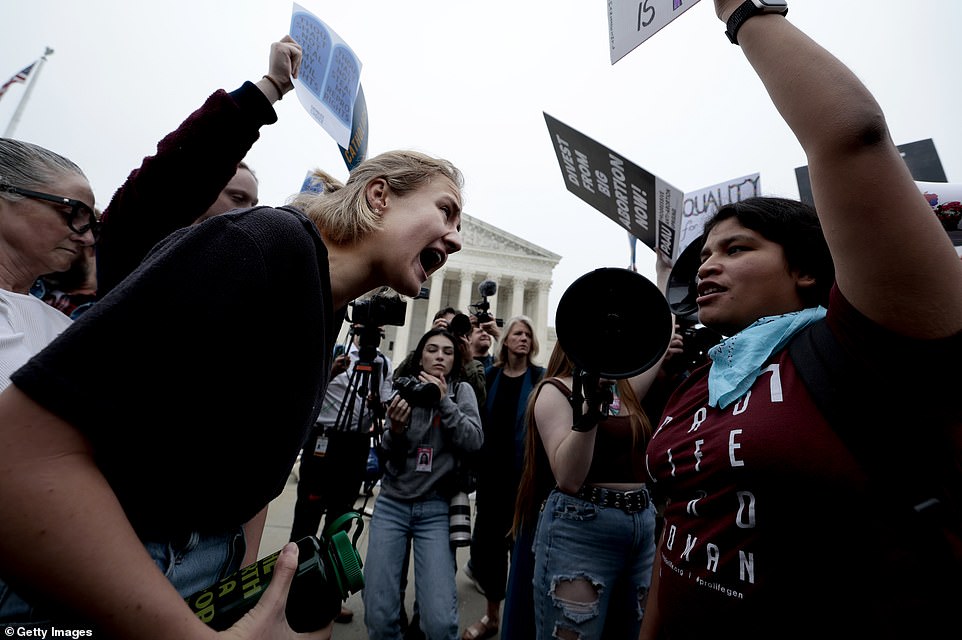 Pro-abortion protesters clashed with pro-life activists outside the United States Supreme Court on Tuesday, May 3, 2022 after the leak showed conservatives on the court are potentially on track to overturn Roe v. Wade

‘Roe v. Wade in its power has protected a woman’s right, her right, to make decisions about her own body for nearly half a century,’ Harris said to the room of progressives Tuesday evening.

‘If the court overturns Roe v. Wade, it will be a direct assault on freedom, on the fundamental right of self-determination to which we are all entitled as Americans.’

She laid out for voters a choice in the 2022 midterm elections between two very differing views on abortion.

If Roe v. Wade were overturned by the 6-3 conservative majority Supreme Court the decision on lawmaking surrounding abortion would go to the states – meaning more liberal states would likely see less of an impact than red states where lawmakers and constituents push for a full ban.

A Politico/Morning Consult poll taken in the day following the leak showed that 50 percent of Ameircans do not want Roe v. Wade overturned and only 28 percent want it overturned. 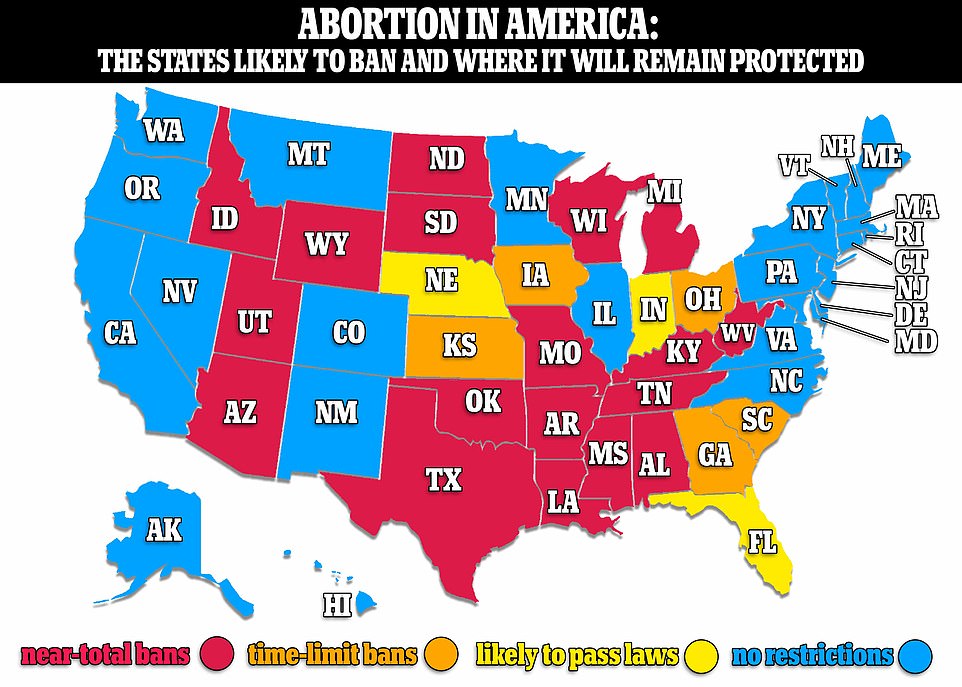 5 Reasons You Should Attend a Leadership Conference