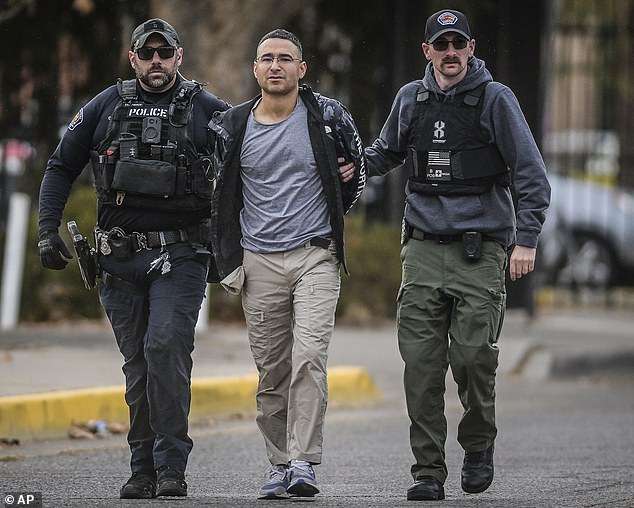 A failed Republican candidate for New Mexico‘s state legislature was arrested for allegedly hiring four gunmen to carry out shootings against Democrat officials.

Solomon Pena, 39, who ran for a state House seat last November and claimed the elections were ‘rigged’, was arrested on Monday after a standoff with a SWAT team in Albuquerque.

He was accused of hiring four others to open fire at the homes of Adriann Barboa and Debbie O’Malley, two Bernalillo County commissioners, and State Sen. Linda Lopez and state Rep. Javier Martinez.

Martinez, the Speaker of the New Mexico House, said he was relieved that a suspect had been arrested in connection the series of shootings.

‘I am grateful a suspect is in custody and I trust our justice system will hold them accountable,’ he said.

Solomon Pena, who ran for a New Mexico House seat last November, was arrested on Monday after a standoff with a SWAT team in Albuquerque. He is accused of orchestrating shootings against four Democratic officials in the state 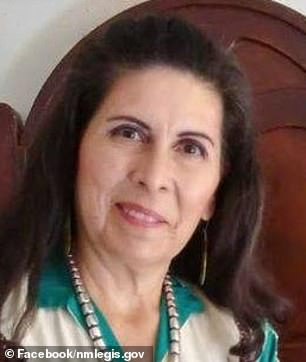 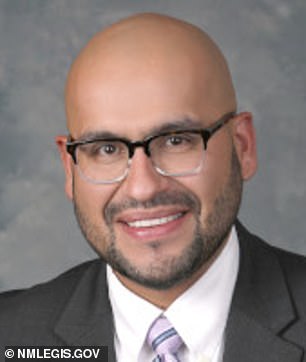 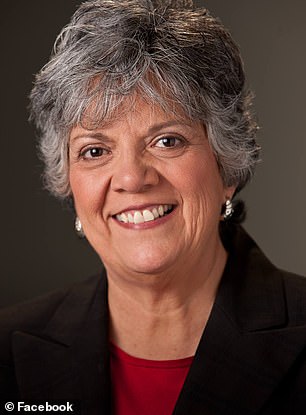 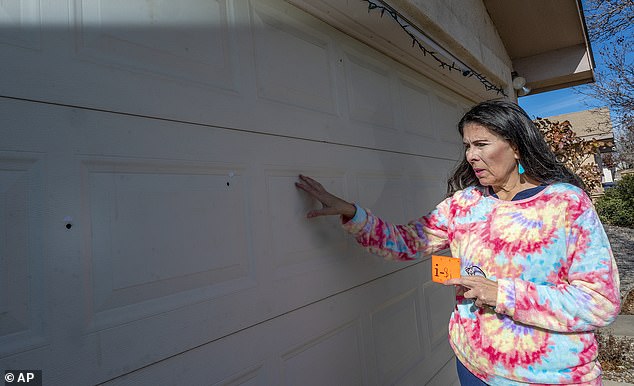 Lopez is pictured standing by the bullet holes left in her garage door following the shooting on January 3, where three bullets also passed by her 10-year-old daughter’s room

The shootings began December 4, when eight rounds were fired at the home of Barboa. Days later, Martinez’s home was targeted.

On December 11 shooting, more than a dozen rounds were fired at O’Malley’s house, police said.

The final related shooting, targeting Lopez’s home, unfolded in the midnight hour of January 3. Police said more than a dozen shots were fired and Lopez said three of the bullets passed through her 10-year-old daughter’s bedroom.

Following Pena’s arrest on Monday, Albuquerque Police Deputy Commander Kyle Hartsock said at least four men were believed to have taken part in the shootings, with the politician serving as the ‘mastermind.’

The police officials noted that investigators believe Pena was the shooter in at least one of the attacks on the Democrat officials.

After the election, police said, Pena showed up uninvited at the elected officials’ homes with what he claimed were documents proving he had won his race. There was no evidence of widespread voter fraud in New Mexico in 2020 or 2022.

The shootings began shortly after those conversations.

‘This type of radicalism is a threat to our nation and has made its way to our doorstep right here in Albuquerque, New Mexico,’ Mayor Tim Keller said. ‘But I know we are going to push back, and we will not allow this to cross the threshold.’ 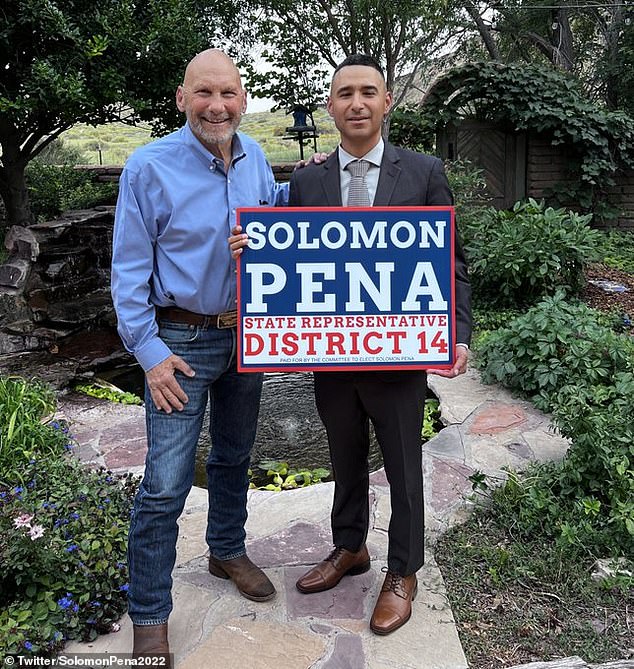 Pena (above) ran for state representative last year, and had lost against incumbent state Rep. Miguel P. Garcia, who won by 48 percent 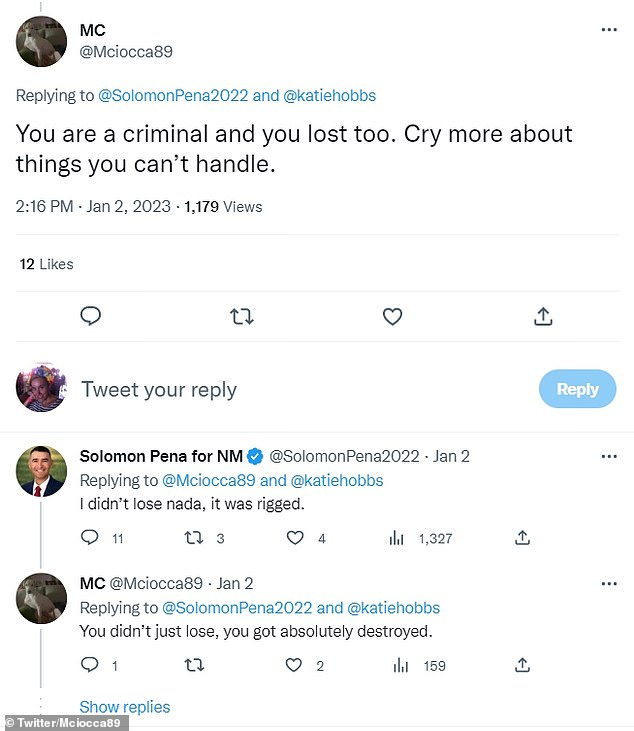 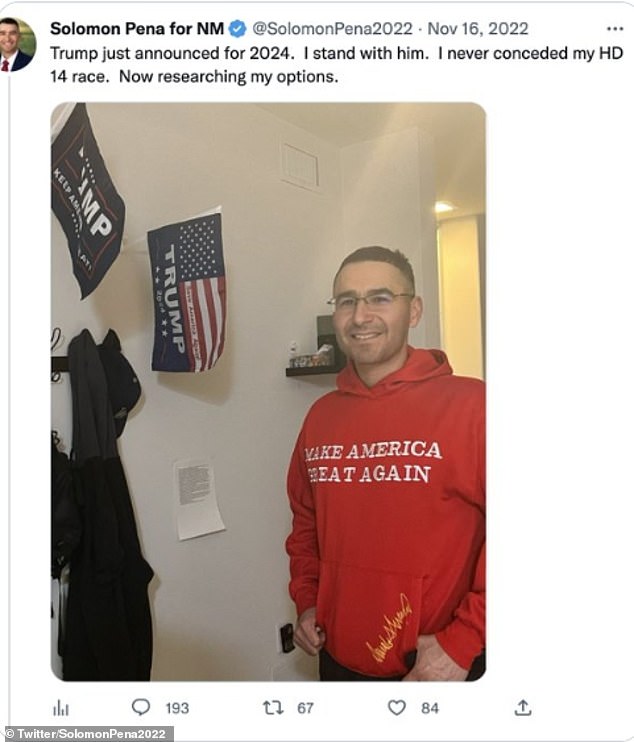 Pictured: Pena’s tweet following his defeat, where he says he never conceded his race and was ‘researching’ his next moves

Gallegos added that Pena had previously met with three county commissioners and a state senator before the shootings, getting into a heated argument about the election results.

Gallegos did not specify if any of the officials targeted in the shootings were at that meeting.

According to the Albuquerque Journal, Pena’s opponent, Garcia, had filed a lawsuit to keep the Republican from running for office due to a burglary conviction that had him serve nearly seven years in prison.

Four men conspired with Pena, who is accused of paying them cash to carry out at least two of the drive-by shootings in stolen vehicles, while Pena ‘pulled the trigger’ during one of the crimes, Hartsock said.

A lawyer for Pena who could comment on the allegations wasn’t listed Monday night in jail records. 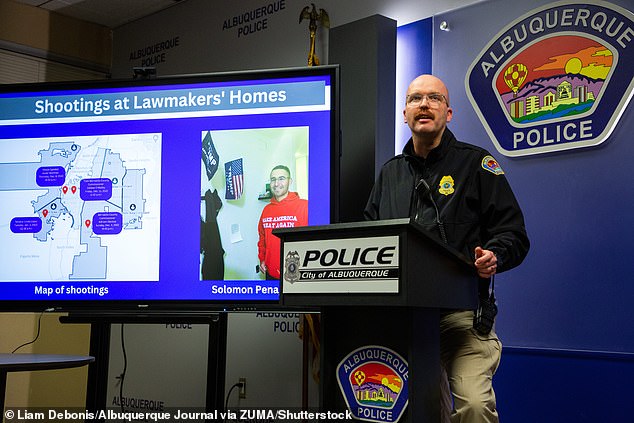 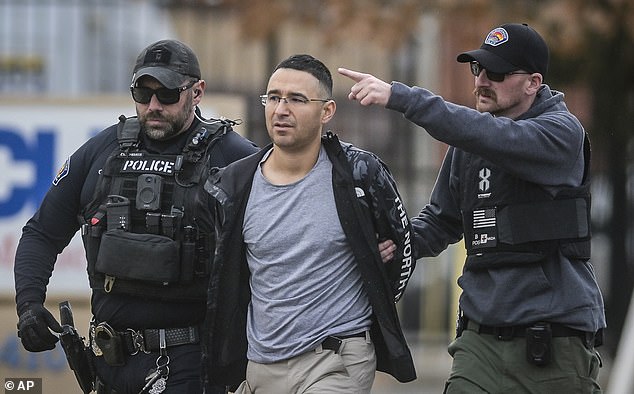 Investigators received a break in the case after technology that can detect the sound of gunfire led an officer to Lopez’s neighborhood shortly after the shots were fired.

The officer found bullet casings matching a handgun found later that morning in a Nissan Maxima registered to Pena.

Around 1:30am, about an hour after the shooting at Lopez’s home, police stopped the Nissan about 4 miles from the lawmaker’s neighborhood.

The driver, identified Monday night as Jose Trujillo, was arrested on an outstanding warrant, leading to the discovery of more than 800 fentanyl pills and two firearms in the car, police said.

A criminal complaint outlining the exact charges against the former political candidate was expected to be released in the coming days.

Although he was endorsed by New Mexico’s Republican Party, GOP officials have since condemned Pena following his arrest and said if he’s found guilty, ‘he must be prosecuted to the full extent of the law’

Additional arrests and charges also were expected, but police declined to elaborate, citing the ongoing investigation.

Detectives also were investigating two additional shootings they initially believed could be related to the Pena case: one in the vicinity of New Mexico Attorney General Raul Torrez´s former campaign office and another at state Sen. Antonio Maestas´ office.

Police on Monday said the shootings do not appear to be connected.

The New Mexico Republican Party condemned Pena in a statement Monday night. ‘If Pena is found guilty, he must be prosecuted to the full extent of the law.’

‘This is yet another example of a convicted felon unlawfully gaining access to firearms, which they are barred from owning or possessing, and using the weapon in a manner that causes public harm.’

‘I commend the Albuquerque Police Department, State Police and the District Attorney’s Office for a successful partnership to apprehend the suspected perpetrator.’ Grisham said.

‘There is no place in our society or our democracy for violence against any elected official or their families, and I trust the justice system will hold those responsible for such attacks to full and fair account.’

Dashcam footage shows steakhouse cook arrested when he is mistaken for a fugitive with...