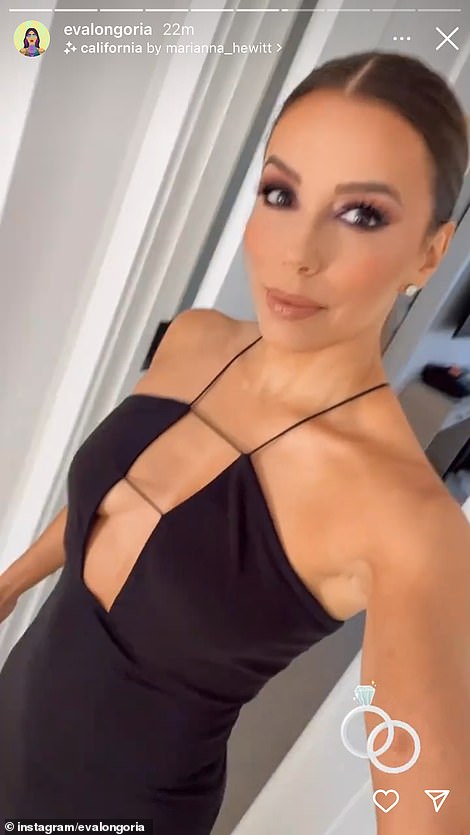 Eva Longoria wowed in a cut-out black dress as she led the stars sharing a glimpse at their looks ahead of Brooklyn Beckham and Nicola Peltz’s wedding on Saturday – despite the apparent social media ban!

The actress, 47, took to her Story just hours before the budding chef, 23, and his billionaire heiress fiancée, 27, tie the knot in a lavish £3.5 million Florida ceremony at her father Nelson’s £76 million family estate.

Flashing her cleavage in the risqué number, she posed for a stunning mirror video before joining her husband José Bastón, 53, along with nightclub owner David Grutman, 47, and his model wife Isabela, 30, for a group shot. 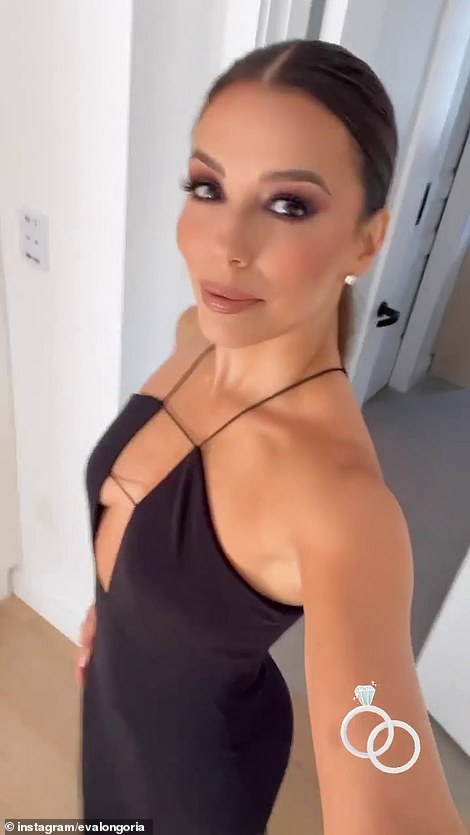 Gorgeous: Eva Longoria wowed in a cut-out black dress as she led the stars sharing a glimpse at their looks ahead of Brooklyn Beckham and Nicola Peltz’s wedding on Saturday – despite the apparent social media ban

Isabela flashed her legs in an unmissable thigh-split red maxi dress while the men put on dapper displays in navy suits and bow-ties.

The model, 19, took to her Instagram Story on Friday night to share a snap of her and Romeo, also 19, dressed up to the nines for the rehearsal dinner ahead of the lavish nuptials. 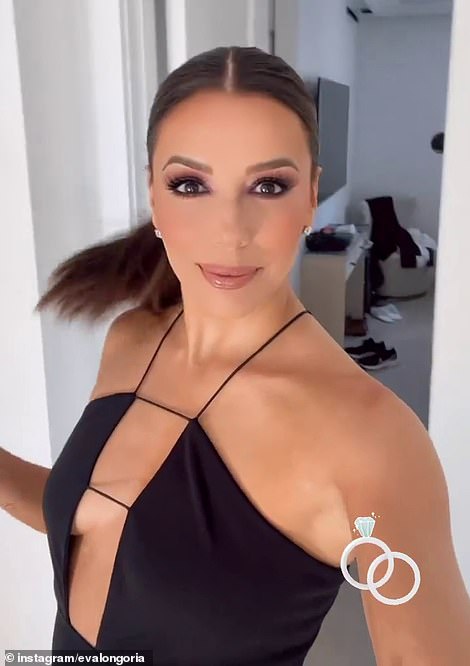 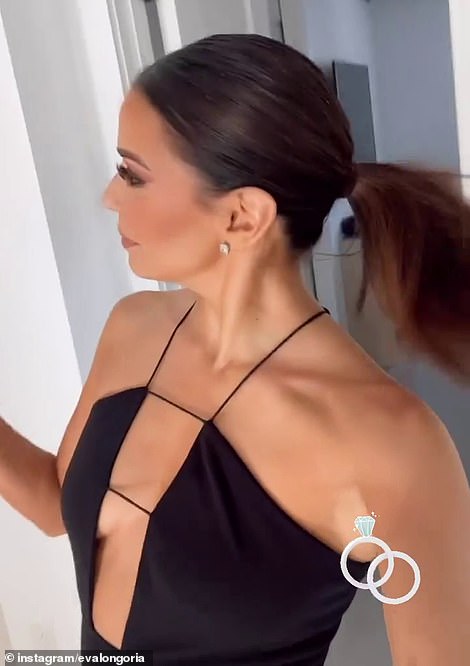 Posing: The actress, 47, took to her Story just hours before the budding chef, 23, and his billionaire heiress fiancée, 27, tie the knot in a lavish £3.5 million Florida ceremony at her father Nelson’s £76 million family estate 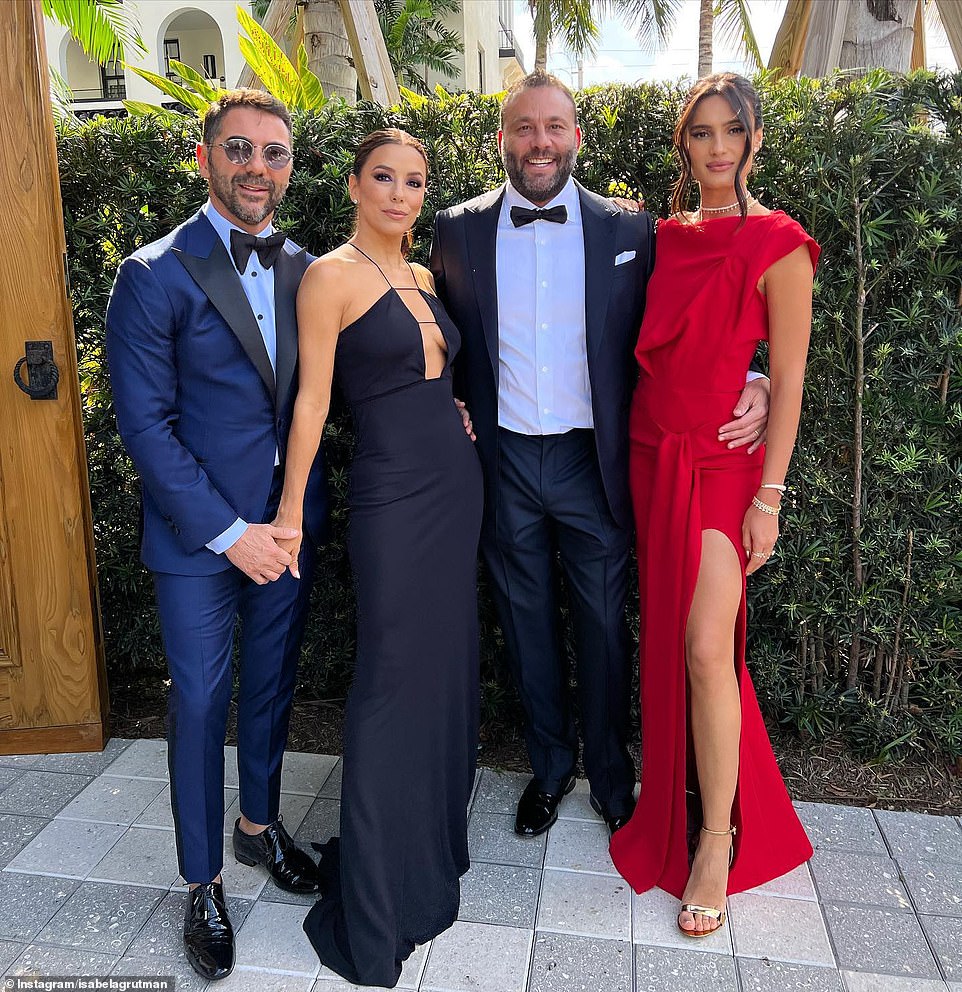 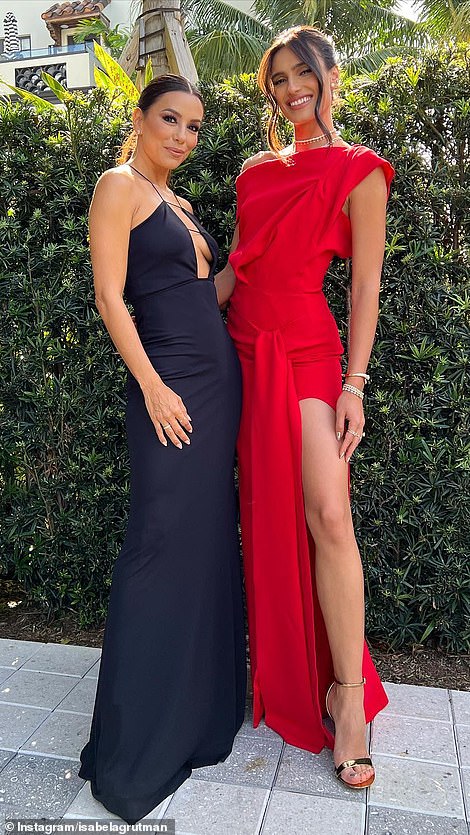 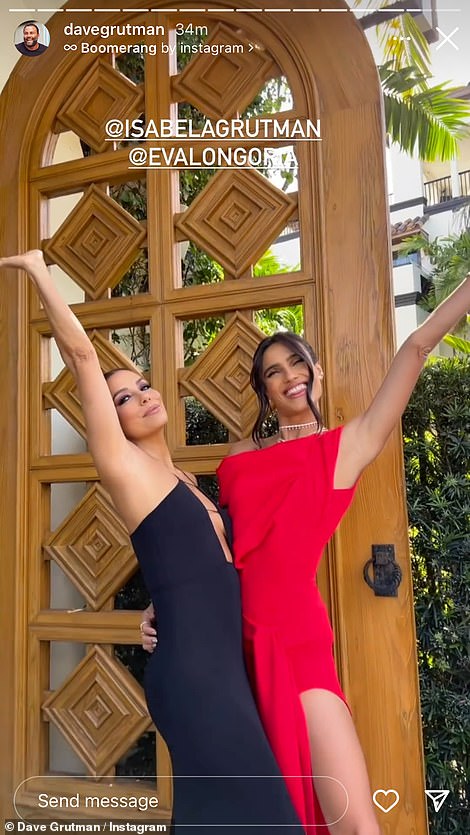 What a pair! Isabela flashed her legs in an unmissable thigh-split red maxi dress while throwing her hands in the air alongside the Desperate Housewives star

Brooklyn and Nicola have told all guests not to take pictures and upload them to social media on the day, and will reveal snaps and details of the wedding in an exclusive Vogue article.

In the image Mia showed off her quirky sense of style in a yellow dress that flashed her taut midriff and was teamed with a low-rise silver belt.

She completed the look with white cow boy boots for the snap as Romeo stood beside her in a bold pink suit and crisp white shirt.

Their faces weren’t visible in the snap but it was shared to her account last night (LA time) when the dinner was taking place. 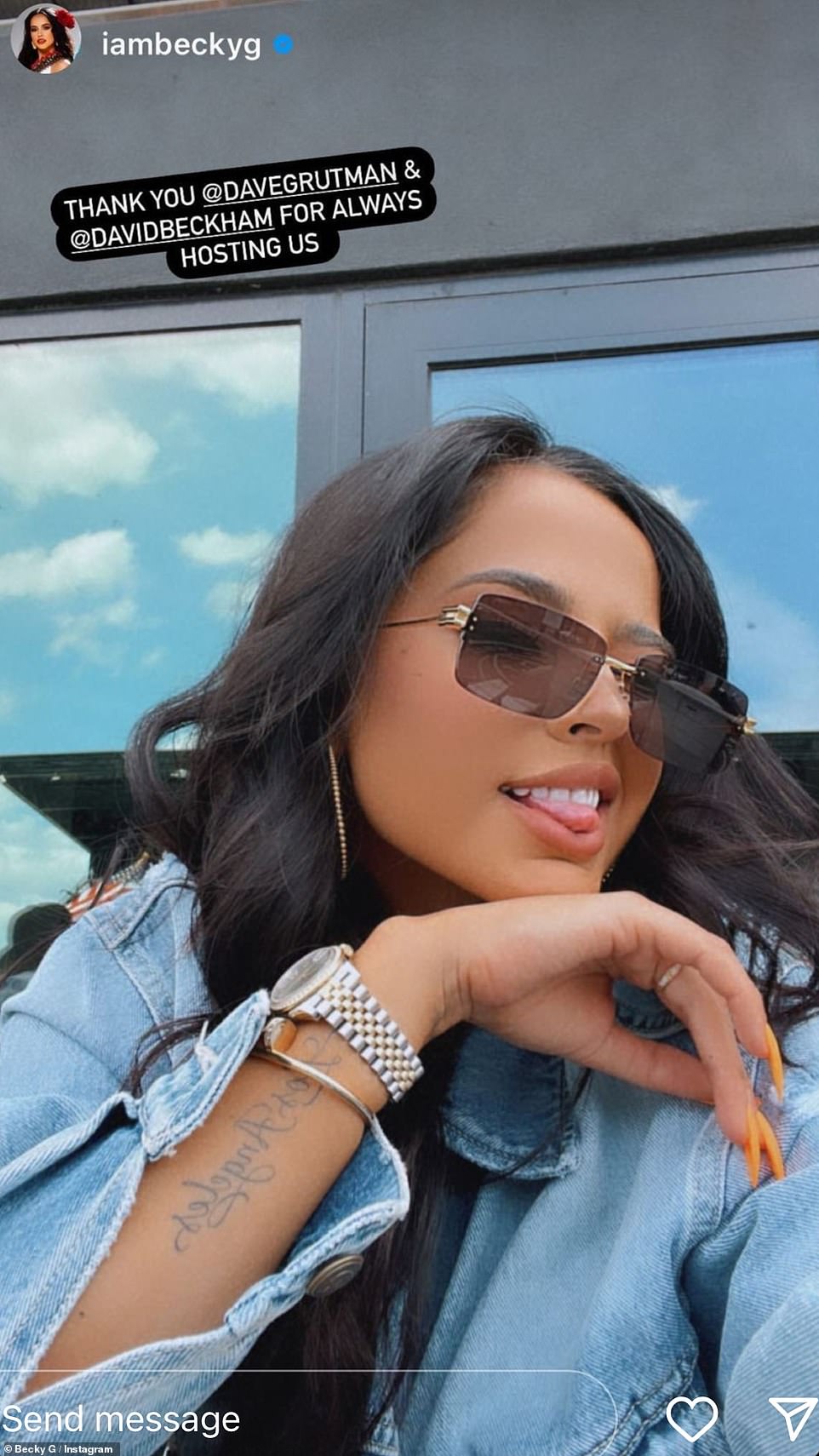 Dresses down: Becky G kept things casual in a faded denim jacket and frameless sunglasses as she confirmed her attendance on the social media platform 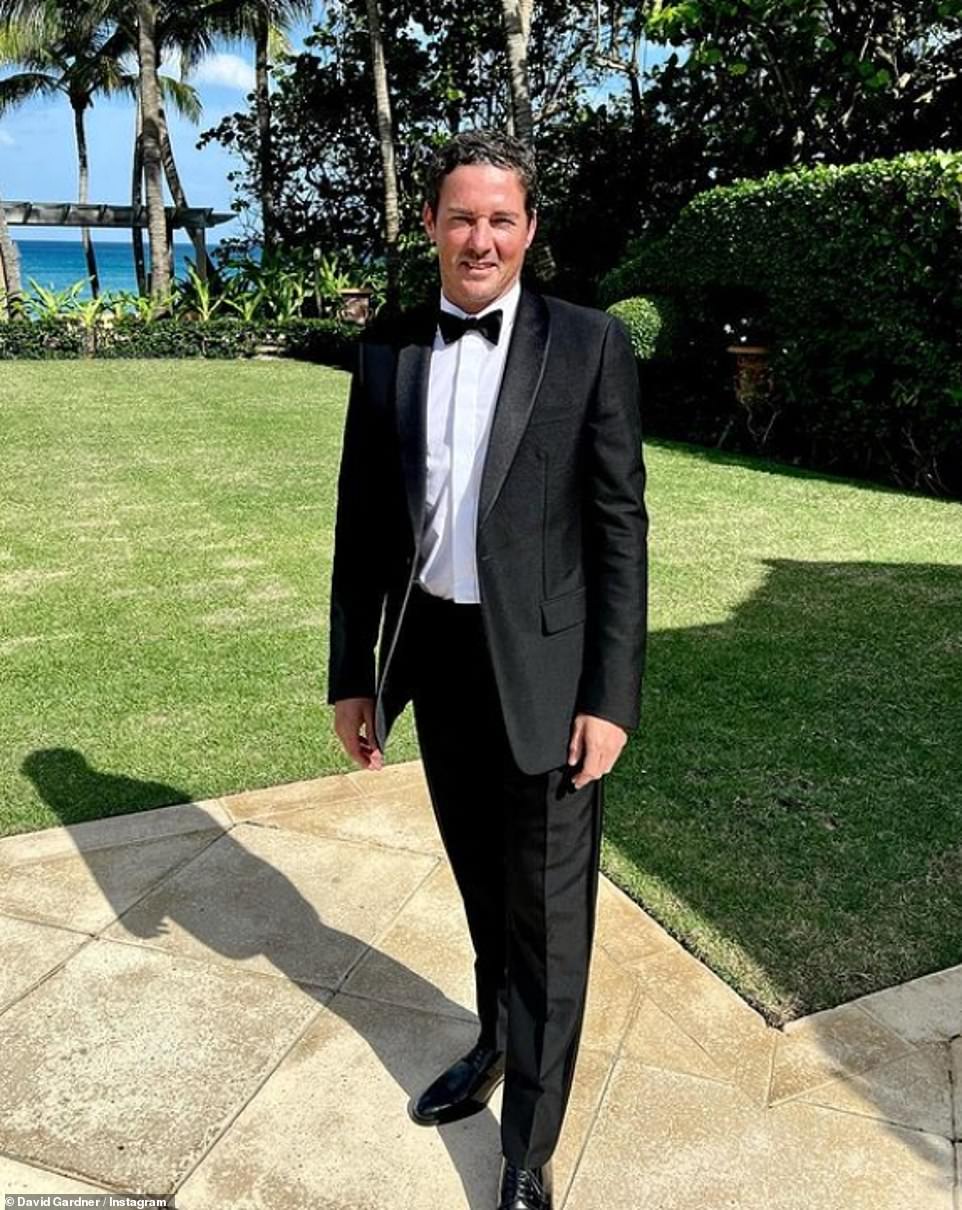 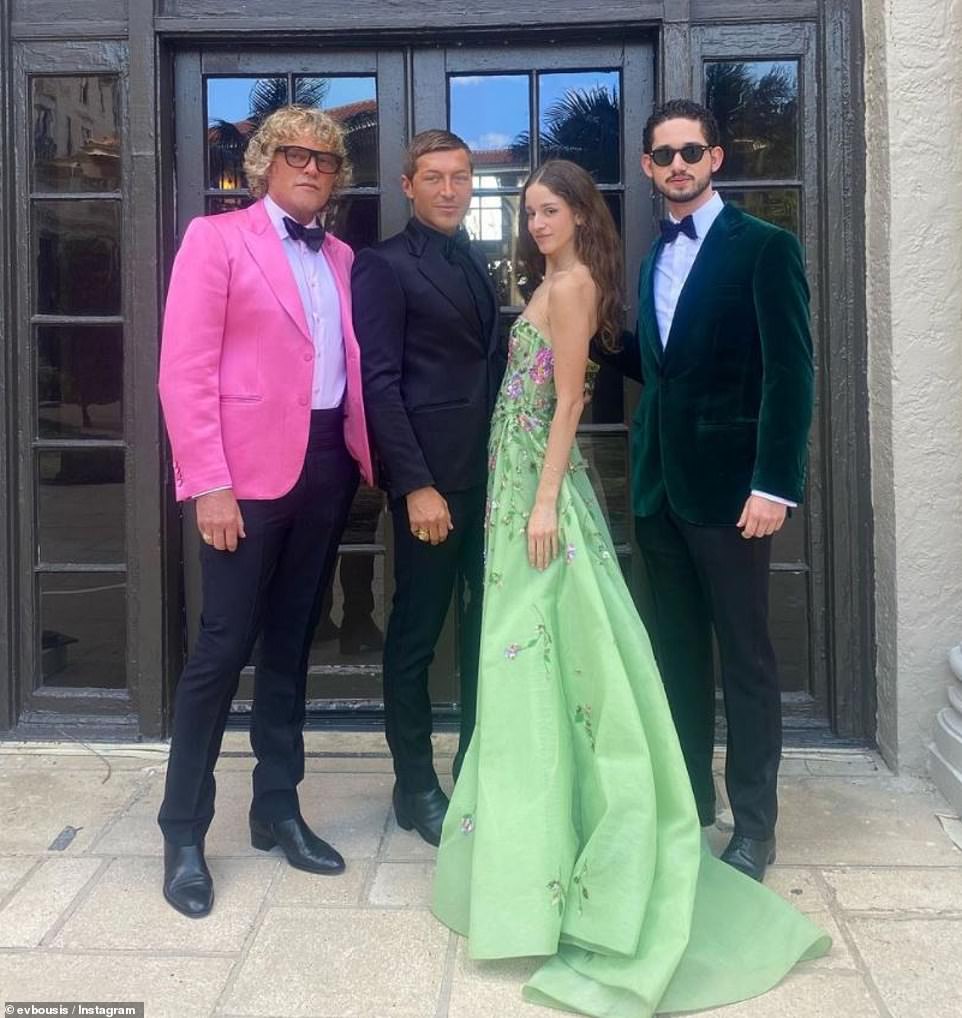 Smart: Evangelo Bousis also couldn’t help but share a slew of glamorous snaps as he got ready for the wedding with Peter Dundas, Peter König and Coco König 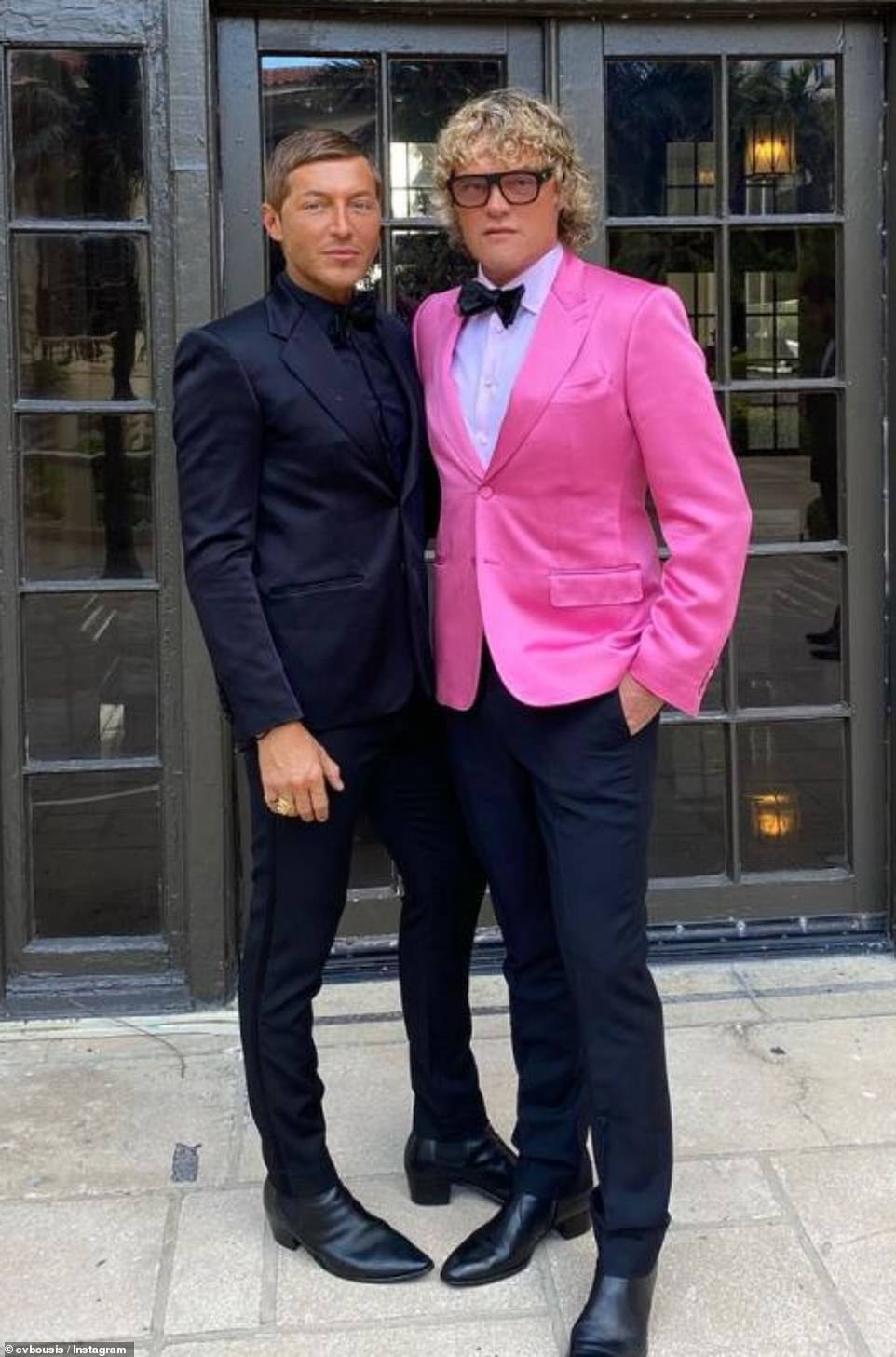 What a pair! Evangelo cut a smart figure in an all-black ensemble while Peter added a pop of colour to his ensemble with a pink jacket

Romeo also shared a snap of the sunrise to his own Instagram as he woke up on the morning of the wedding.

In true 21st-century fashion, Vogue magazine has photographers and videographers on hand to document every moment of the wedding.

A source said: ‘It’s a nice event, not too big, it will be black tie.

‘There is heavy security and the hundreds of guests have been asked not to share pictures of the bride and groom as they have an exclusive arrangement with Vogue, who will put pictures up on their website. 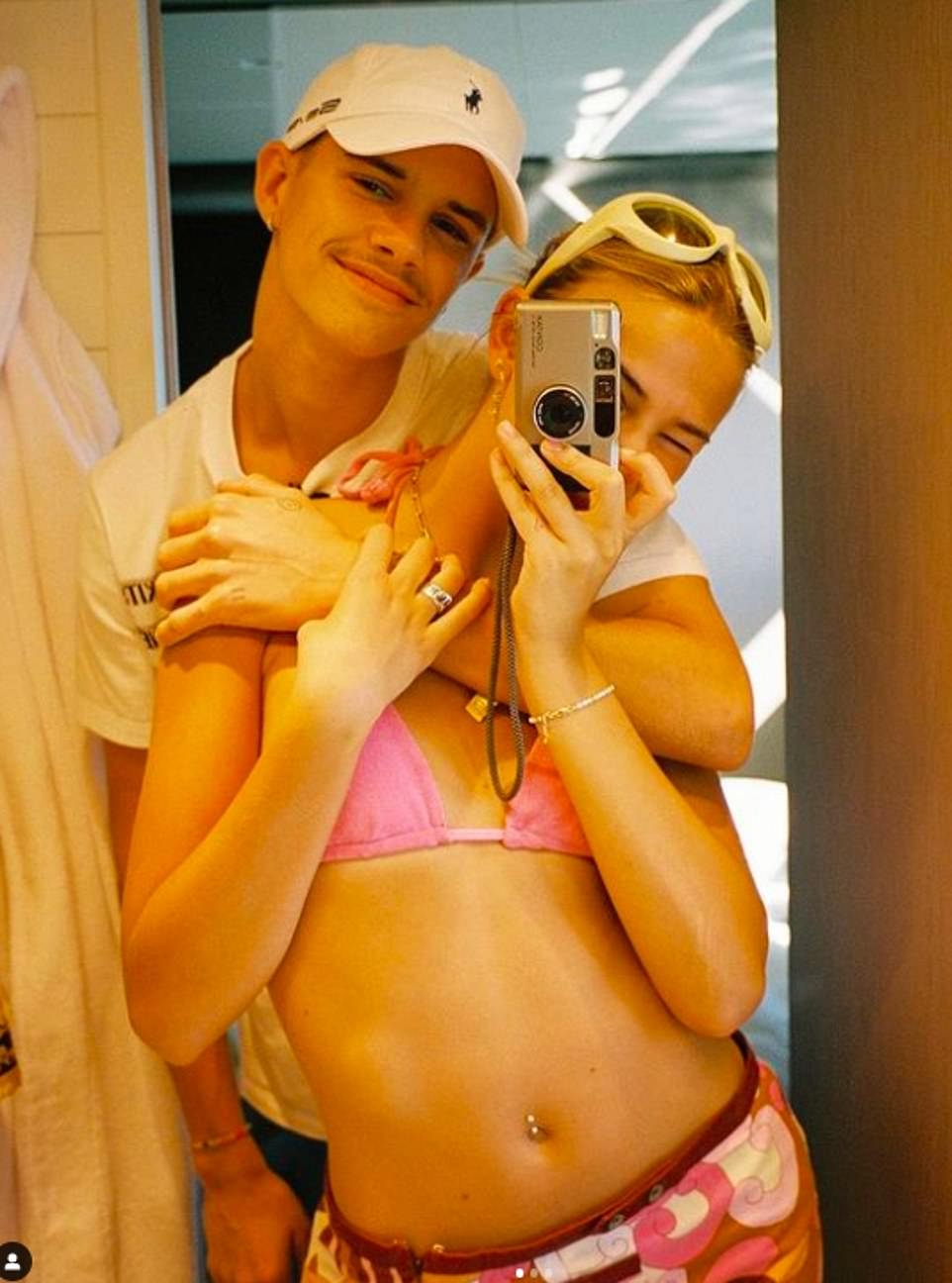 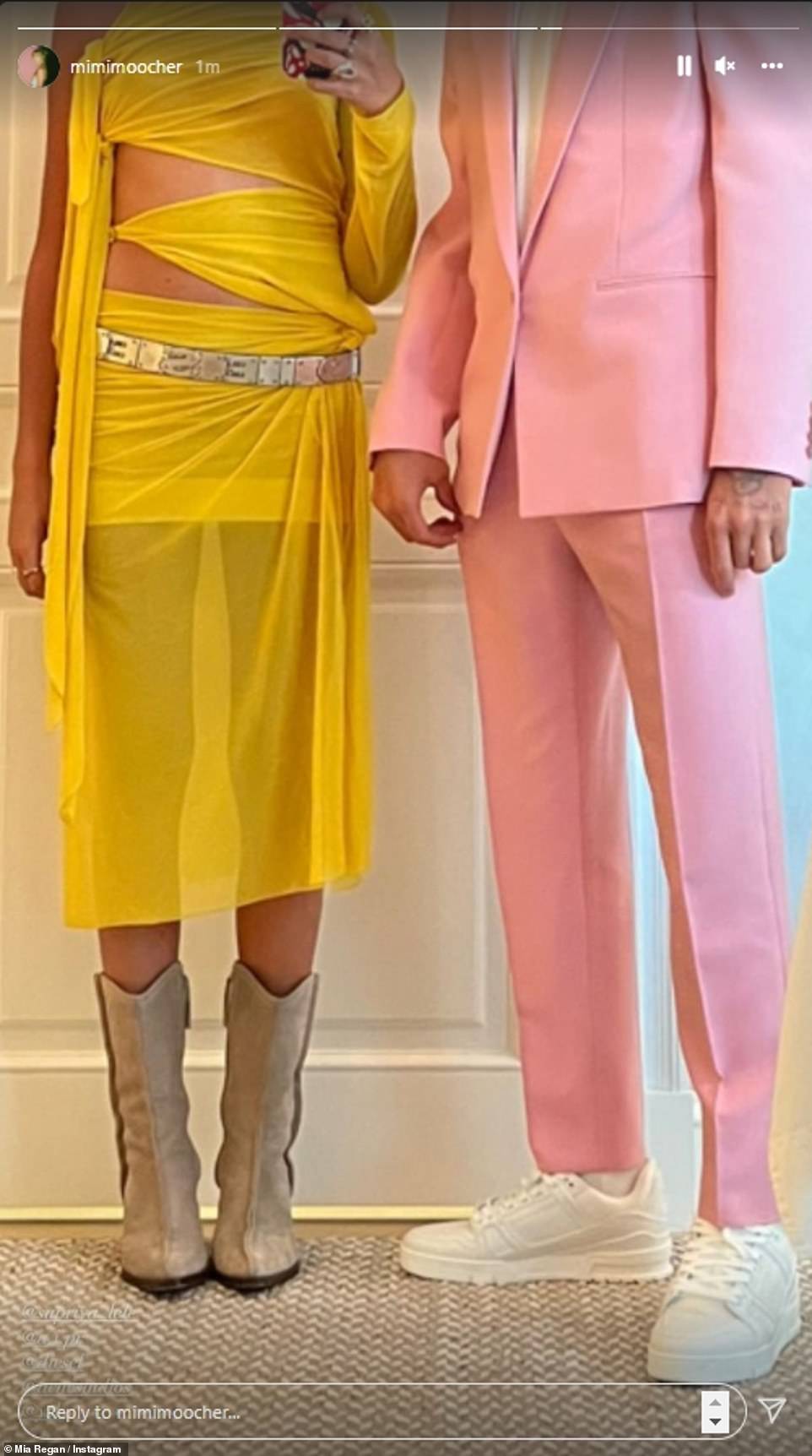 Outfits: The model, 19, took to her Instagram Story on Friday night to share a snap of her and Romeo, also 19, dressed up to the nines for the event ahead of the lavish nuptials

Lots of the guests are bringing their own hair and make-up artists — it’s that sort of event.’

Brooklyn and Nicola are set to tie the knot at the actress’s £76million sprawling family estate in a £3million wedding ceremony today.

Preparations for the wedding ceremony on Saturday are well underway at the Peltz mansion, with photographs showing the finishing touches being done on Friday.

Aerial pictures showed three huge marquees erected on the beachfront, while two smaller tents were also put up elsewhere on the sprawling estate. 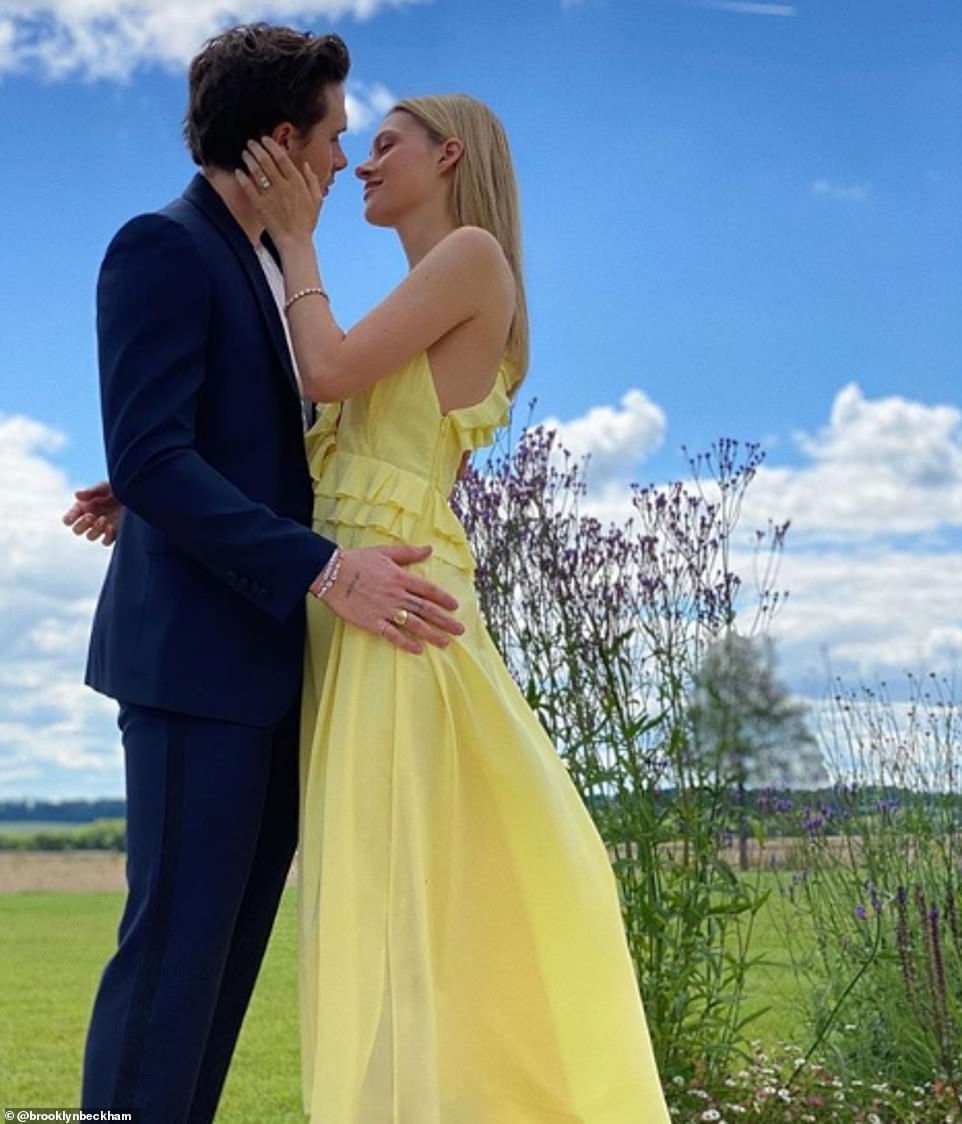 Exciting: In July 2020 Brooklyn proposed to Nicola with a £250,000 emerald and diamond ring after just eight months of dating

Days before their lavish nuptials this weekend, the pair admitted they both have some last minute nerves – but are scared of different parts of the celeb-packed ceremony.

After Nicola wrote down that she thought Brooklyn would be most scared of the first dance, he told her: ‘I’m great at dancing, I’m not worried about that,’ as he reveals his answer to be his wedding speech.

‘I’m terrified about the first dance, I can’t dance,’ Nicola confessed, only for Brooklyn to pull a face and insist: ‘I’m gonna kill that.’

The loved-up couple matched answers on the question of what they’re most looking forward to about the wedding, sweetly answering ‘marrying you,’ and both think ‘sensitive’ Brooklyn will be the most likely to cry on the big day.

Brooklyn is understood to have signed a prenuptial agreement with his heiress bride-to-be Nicola. The £380million fortune of Brooklyn’s parents is dwarfed by the estimated £1.3billion wealth of Nicola’s financier father Nelson.

As wedding preparations are underway, Nicola recruited Leslie Fremar – a stylist who has worked with Hollywood A-listers Demi Moore and Charlize Theron – to help choose her dress.

The pair travelled to the headquarters of Valentino in Rome and Nicola has confirmed her gown has been designed by the fashion house’s Pierpaolo Piccioli.

‘Nicola trusts Leslie implicitly and, while her dress is being made by Valentino, Leslie is the person she has turned to help with how she will accessorise and how she will have her hair and make-up,’ a source said.

From the middle of last week, trucks started to arrive in Palm Beach, and police were patrolling the vicinity of the estate.

The marquees are of a size usually rented for trade fairs. Each could comfortably hold 1,000 people — and there are three of them on the lawn at the Peltz’s £76million estate.

The largest will apparently hold a dance floor where rapper Snoop Dogg is going to DJ.

The food is apparently being provided by Miami chef Thierry Isambert, who has previously cooked for former U.S. president Bill Clinton.

Dietary choices include the usual vegan and vegetarian options, but also stretch to allergy-specific choices and even a ‘light’ option, which comes in underneath a certain calorie-counted ceiling. 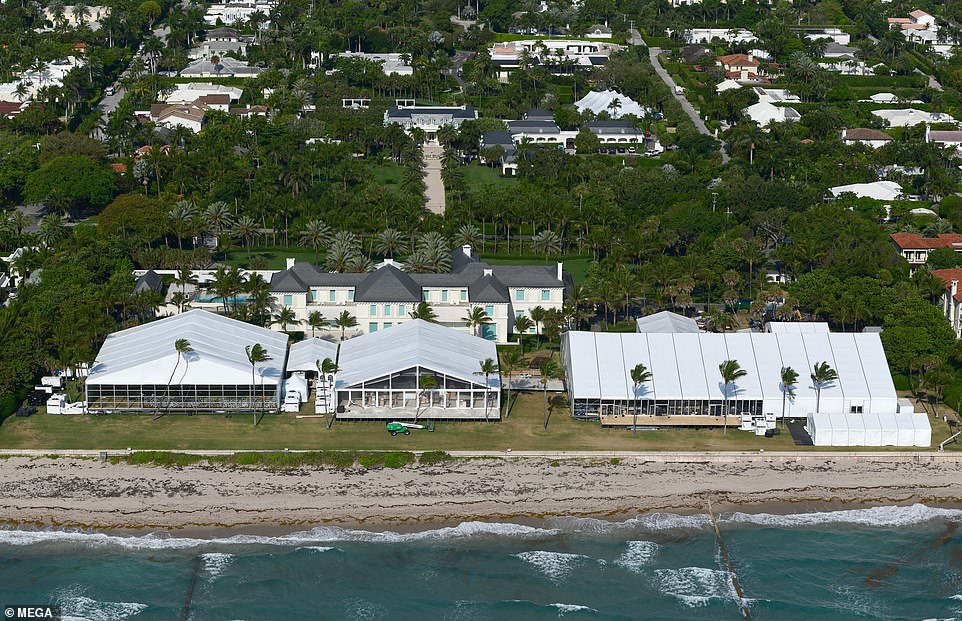 Preparations: Huge marquees have been erected in the grounds of actress Nicola’s family home in Palm Beach, Florida, ahead of her Saturday wedding

Hilary Duff has her hands full during errand run with daughter Banks, three, in...

Taller than 5ft9? You’re at greater risk of more than 100 health problems, study...