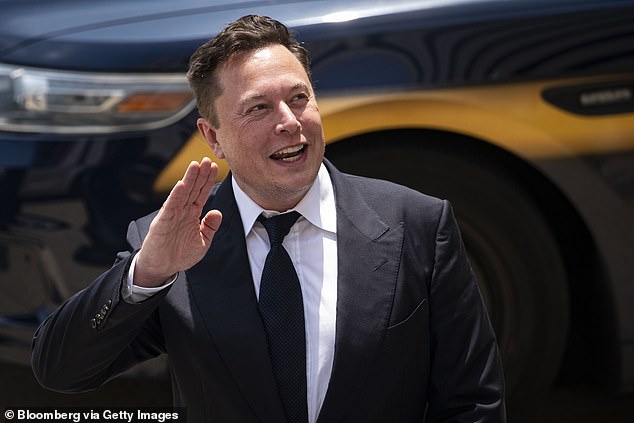 Experts predict that Twitter’s largest investor Elon Musk could become an activist investor and attempt to replace Twitter CEO Jack Dorsey, install a disrupter on the board or even release damaging information about firm.

Last week the Tesla CEO revealed that he had become Twitter’s largest shareholder, with a 9.2 percent stake in the company.

Since the announcement Twitter’s share price has fallen and as of Tuesday morning  was trading at $45.83 per share, a 2.49 percent drop from Monday.

One day after he disclosed his stake, platform CEO Parag Agrawal announced the Tesla co-founder had been invited to the join the company’s board of directors, a seat he gladly accepted.

By accepting the board seat, Musk was limited in how much of the company’s shares he could own, with a 14.9 percent cap. However, on Sunday Parag announced the SpaceX CEO formally declined his board seat.

Although it is not known what kind of investor Musk will be, he has already vowed to ‘make significant improvements’ to the site 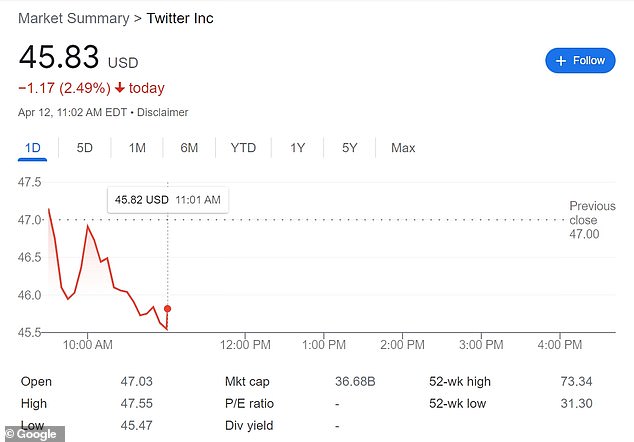 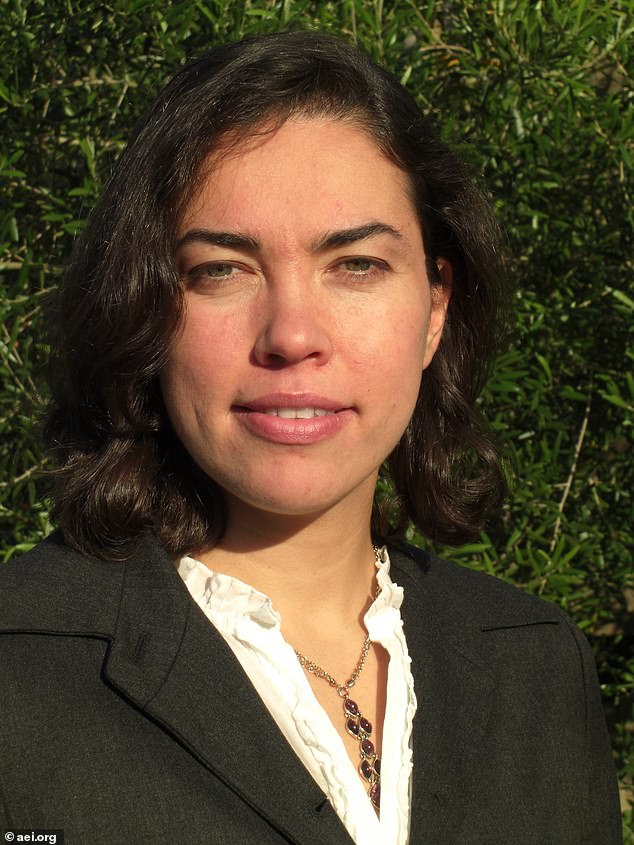 Brandeis University finance professor Anna Scherbina said Elon Musk could potentially turn into an activist investor, putting pressure on management and pushing his agenda until he gets what he wants

Brandeis University finance professor Anna Scherbina told NPR that she predicts Musk could potentially turn into an activist investor, putting pressure on management and pushing his agenda until he gets what he wants.

Scherbina told NPR that some of the tactics activist investors use to influence a company include pressuring shareholders by lobbying them, or even releasing information about the company to the public.

Activist investors also install people who share their point of view on the board of directors and in more aggressive cases they even attempt to replace the company CEO.

The reason for the tactics are the activist investor thinks things need to change at the company but that often puts them at odds with the company board, who are usually not open to being criticized by shareholders, no matter how large a stake they have, Scherbina said.

Although it is not known what kind of investor Musk will be, he has already vowed to ‘make significant improvements’ to the site. 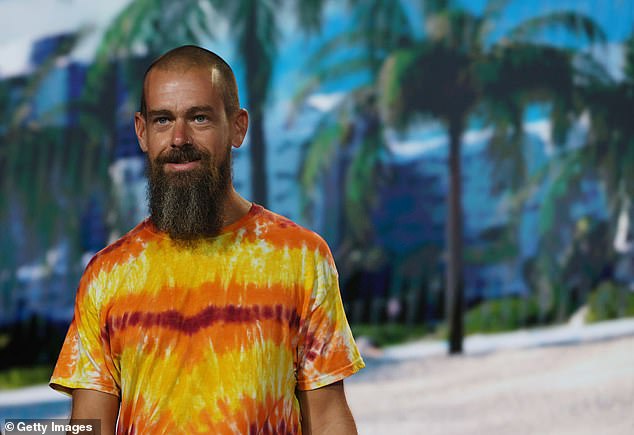 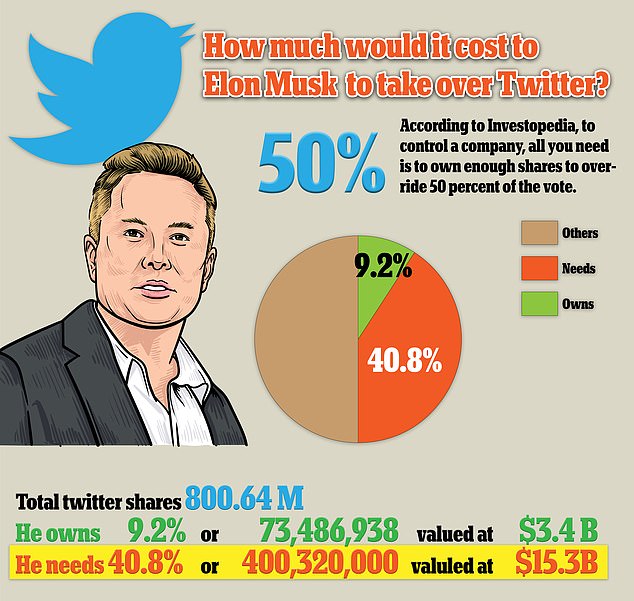 Musk would need to purchase roughly 400.32 million additional shares, valued around $15.3billion, to own 50 percent of Twitter

Musk, who describes himself as a ‘free speech absolutist,’ has been highly critical of Twitter and its policies as of late, arguing he doesn’t think Twitter is living up to free speech principles – an opinion shared by followers of Donald Trump and a number of other conservative political figures who’ve had their accounts suspended for violating Twitter content rules.

Jason Miller, former Trump spokesman and CEO of rival social media platform Gettr, told DailyMail.com Musk probably realized that the culture is so embedded in Twitter that it can’t be changed: ‘It is like getting a rental car from a driver who smoked. You can’t get rid of the smell.’

‘The entire culture is fundamentally broken,’ Miller said, and criticized their constant political discrimination, censoring of conservative voices including Jake Posobiec and Juanita Brodderick and continually choosing ‘winners and losers’ in the free speech.

The tech tycoon, before reversing course on the board seat, sent out a number of tweets over the weekend referencing potential changes at Twitter.

Last Monday, after revealing his stake in Twitter, Musk asked his followers: ‘Do you want an edit button?,’ referencing a feature that many users have requested 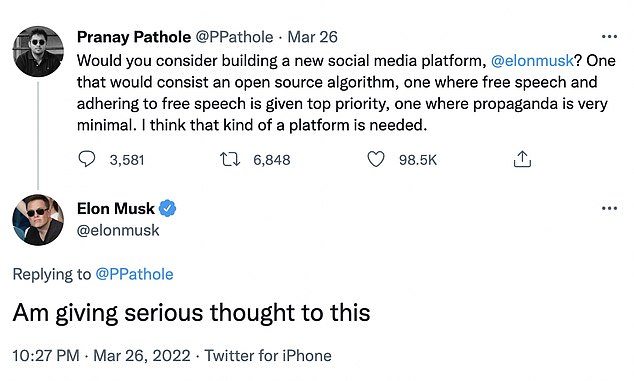 A day later, Musk, a prolific user of Twitter himself, said that he was giving ‘serious thought’ to building a new social media platform 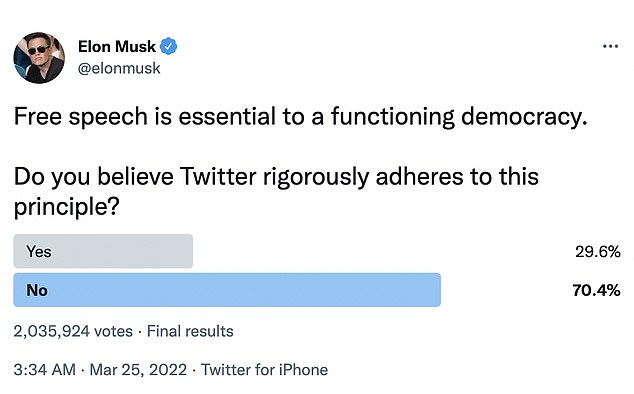 On March 25, Musk tweeted a poll: ‘Free speech is essential to a functioning democracy. Do you believe Twitter rigorously adheres to this principle?’

Many of them, such as his proposal for an ad-free Twitter or turning the social media company’s San Francisco headquarters into a homeless shelter, have since been deleted.

On Saturday, Musk had suggested changes to the Twitter Blue premium subscription service, including slashing its price, banning advertising and giving an option to pay in the cryptocurrency Dogecoin.

And the billionaire even asked his 80 million followers: ‘Is Twitter dying?’

Musk then posted a few cryptic tweets late Sunday, including one showing a meme that said: ‘In all fairness, your honor, my client was in goblin mode.’

He then followed his post with another meme reading: ‘Explains everything.’

Early Monday morning he tweeted an emoji of a smiling face, with a hand over its mouth – supposedly an expression of rapture, a smirk, a shy smile, or indicating happiness. He then deleted it.

Wall Street analysts allege Elon Musk’s declining a seat on Twitter’s Board of Directors – which he had previously indicated he was excited to join – could open the door for the Tesla CEO to buy more stock and organize a takeover of the company.

‘This weekend’s changeup spares the company from having to deal with a renegade director tweeting about board-level discussions. That would have been untenable,’ Don Bilson, of Gordon Haskett Research Advisors, told CNBC Monday.

‘The flip side to this is Twitter must deal with a wildcard investor that already owns 9 percent of the company and has the resources to buy the remaining 91 percent. As volatile as Musk is, we could see a move like that made shortly. Or we could never see it all,’ he added. ‘I don’t think anything is off the menu with this guy.’

‘This is clearly going to be an unfriendly situation,’ Wedbush Securities analyst Dan Ives echoed. ‘Instead of Musk in the board room in the corner just saying nay or agreeing on certain board candidates, I think now it really goes to the point that in the coming days I think we’ll start to see if he’s going to go more hostile, more active – that’s what the Street’s focused on.’

Millions waited for a sign of reconciliation between the estranged princes. So if not...