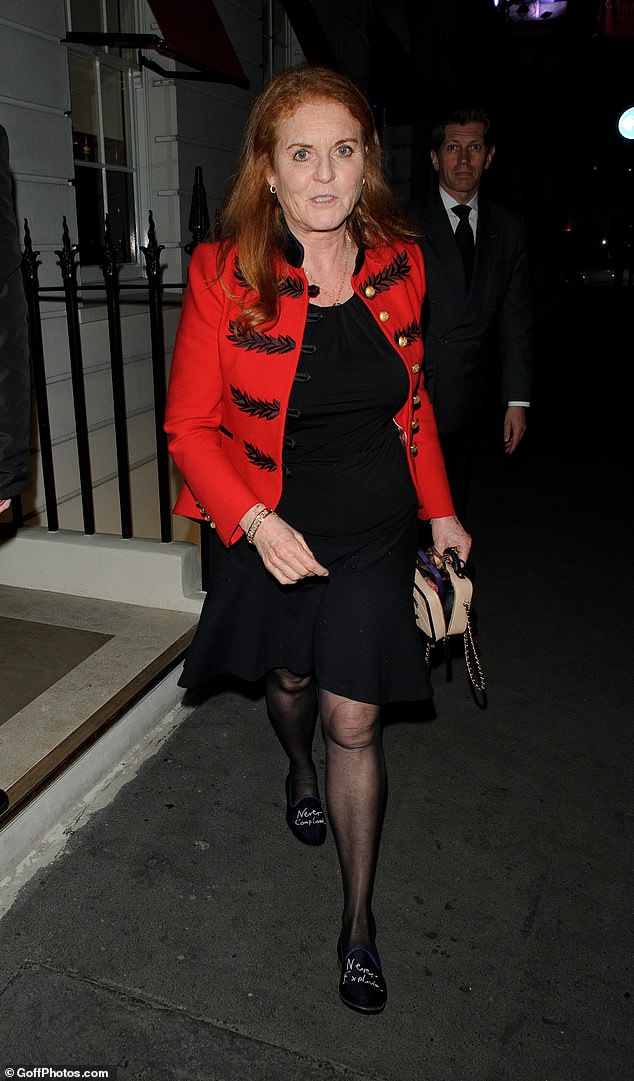 Stripped of his military titles and royal patronages, and even suffering the indignity of losing his honorary Freedom of the City of York this week, Prince Andrew has a lot to be unhappy about.

But his beloved ex-wife, Sarah, Duchess of York is determined to make it clear that her family are not feeling sorry for themselves.

On a night out at Oswald’s private members’ club in Mayfair, Fergie, 62, pointedly chose to wear a pair of blue velvet loafers, handmade by Del Toro X Rotten Roach, imprinted with the words ‘Never Complain, Never Explain’ (circled below). 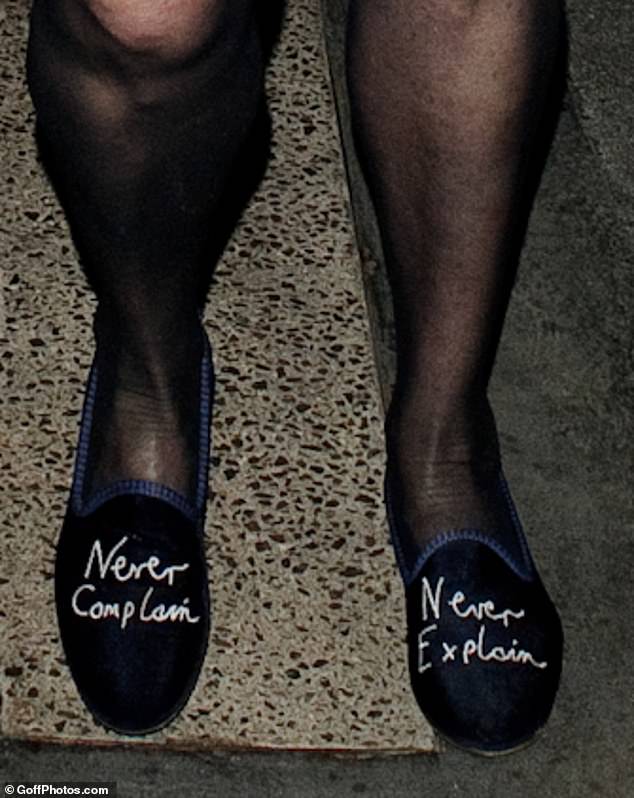 Sarah could be seen wearing a pair of shoes which read, ‘Never Complain, Never Explain’

That’s been the mantra of the Royal Family as long as the Queen has been on the throne, and she has abided by the rule throughout her seven-decade reign.

Her great-grandfather psychoanalyst Sigmund Freud, claimed our romantic relationships are modelled on childhood bonds with our parents.

And novelist Esther Freud suggested her own father — the late celebrated artist Lucian Freud — was the cause of her marriage breakdown to actor David Morrissey.

‘What was most important to him was work,’ explained Esther, 58, whose bohemian childhood formed the basis of her acclaimed novel Hideous Kinky, which was turned into a 1998 film starring Kate Winslet.

‘So in my relationships with men, I never felt I had the right to be more important than work.’ 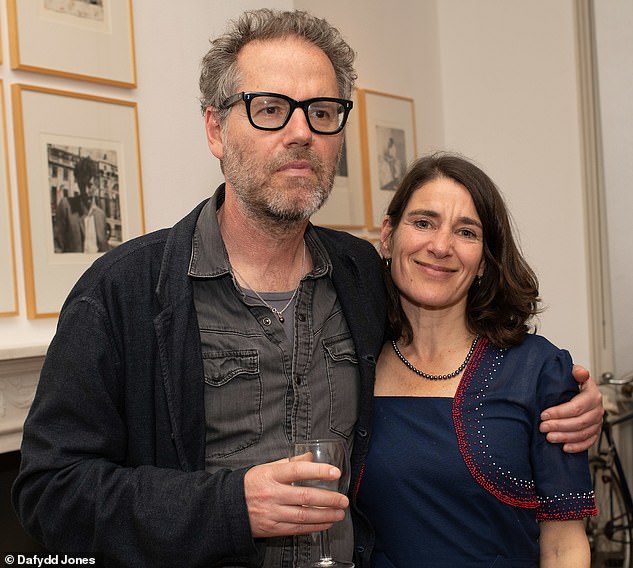 Now, however, I can reveal that Freud has found love again — and, happily, her new boyfriend is an academic whose job won’t involve leaving her for months on end.

They made their first public appearance together this week at a preview party for an art exhibition, Cheerio: 48 Hours With Francis Bacon, at the Tristan Hoare Gallery in Fitzrovia.

They first met at a North London pub, with Simpson paying tribute to his new girlfriend in the acknowledgements section of an academic book published last year.

He wrote: ‘All of this would have been impossible without the lucky break I experienced when I first met Esther Freud one wintry evening at The Flask in Hampstead Village.’

Born in Aberdeenshire, Simpson was married to fellow lawyer and LSE lecturer Deborah Cass, with whom he has two daughters.

With his brooding good looks and her fascinating family history, they were one of society’s most celebrated showbusiness couples.

Comedienne Katherine Ryan failed to see the funny side when one of her London neighbours built a balcony overlooking her swimming pool without planning permission.

‘Due to my background in urban planning, I was able to report them,’ says the Canadian comic, who studied city planning at university in Toronto.

‘I’m not a snitch, but their prejudicing of my property actually devalues my property.’ 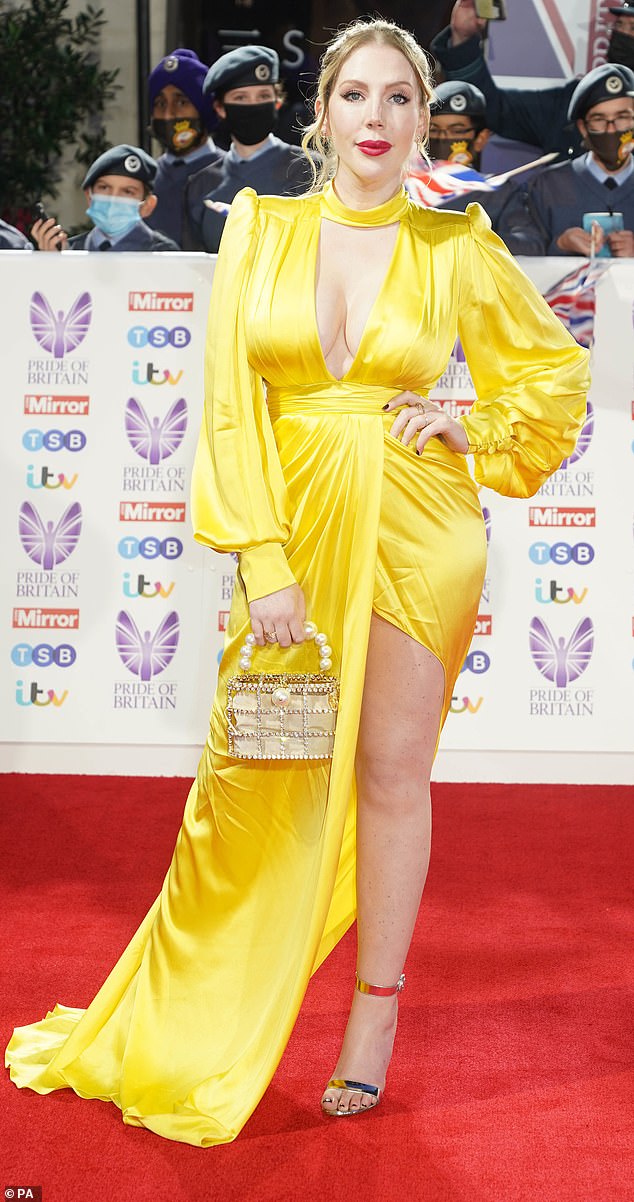 Katherine Ryan during the Pride of Britain Awards held at the The Grosvenor House Hotel, London in October 2021

Ryan, 38, who stars in Channel 4 hit 8 Out Of 10 Cats, lives with civil partner Bobby Kootstra, their ten-month-old son Frederick, and her daughter Violet from a previous relationship.

She adds: ‘I have 12-year-old girls in the swimming pool and then a bunch of builders like leaning over that balcony smoking.

I rang the council. ‘I feel bad about it, but then I convinced myself not to. They have to take it down.’

Sitting in Dictionary Corner, Susie Dent is supposed to be Countdown’s wordsmith, while Rachel Riley is the show’s maths whizz.

But lexicographer Susie, who first appeared on the Channel 4 show in 1992, says her far more streetwise co-star’s better grasp of slang often leaves her with egg on her face over double entendres.

‘There is always so much room for innuendo,’ Susie, 57, tells Saga.

‘I’ll say something which is in the Urban Dictionary [of slang], unaware it has another meaning. Rachel knows, and I catch sight of her laughing out of the corner of my eye, but I honestly don’t know what I’ve said.’

Cuddly TV presenter Eamonn Holmes provoked hundreds of online complaints when he joked that Prince Harry should be ‘thrown over the balcony’ at Buckingham Palace.

But the host of Breakfast on GB News is more friendly with other members of the Royal Family — perhaps too friendly. 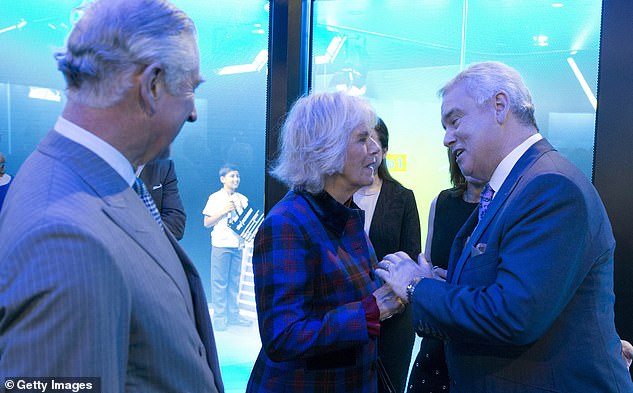 Prince Charles, Prince of Wales looks on as his wife Camilla, Duchess of Cornwall is greeted by TV presenter Eamonn Holmes during a visit to Sky

‘Charles once asked me: ‘Should I be worried about the way you hug my wife?’ ‘She’ll make a great consort.’

Johnny Depp laughs at his childhood friend who takes the stand