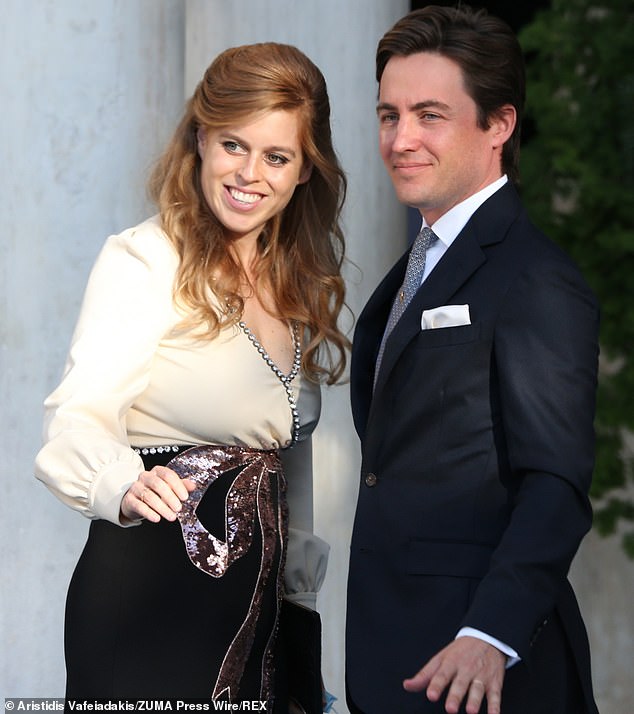 After his mother Dara Huang this week posted a selection of pictures online documenting that his big bash had taken place at Kensington Palace Gardens, within hours the joyous snaps were swiftly removed and deleted by Dara, who offered no explanation as to why she had taken them down.

As my exclusive picture shows before it was unceremoniously removed, the lavish celebration was hardly a low-key affair.

Dara, a 39-year-old American-born architect who was previously engaged to the Princess’s husband, Edoardo Mapelli Mozzi, is seen (right) posing next to the number six, a yellow arch emblazoned with Wolfie’s name and a festoon of balloons and monkey cuddly toys hanging from the trees.

Wolfie and his pals, I’m told, were even treated to an entertainer who put on a magic show for the children in attendance.

Princess Beatrice of York and Edoardo Mapelli Mozzi pictured arriving for the wedding of Prince Philippos of Greece and Nina Flohr in Athens, Greece, in October last year 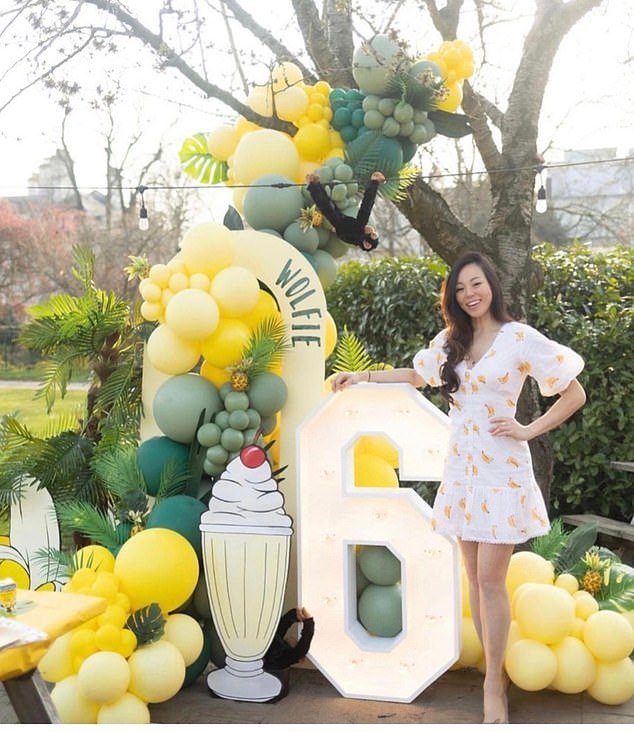 A source tells me that Dara, who shares custody of her son with property developer Edoardo, ruffled a few royal feathers by geo-tagging ‘Kensington Palace Gardens’ in her social media post about the event.

‘Despite wanting to share Wolfie’s birthday celebrations with her followers, after having a few discussions with loved ones Dara decided it was best to keep Wolfie’s day as a private occasion,’ an insider tells me. Dara was unavailable for comment.

Meanwhile, it is unknown what Princess Beatrice, who has a six-month-old daughter called Sienna with Edoardo, did to mark Wolfie’s birthday.

The Princess has become so close to Wolfie that she was recently seen wearing a necklace with his initial ‘W’.

And she let him act as best man at her 2020 wedding, even though he was only four at the time. It made him the youngest person in history to have performed a role at a British royal wedding.

But India, now 30, admits that her wealth has attracted opportunists, who want to befriend her only for her money.

‘I’m very lucky that I have a good sense of character,’ the mother-of-one tells me at a private view of Art On A Postcard, curated by India (left) at her Soho revue gallery. 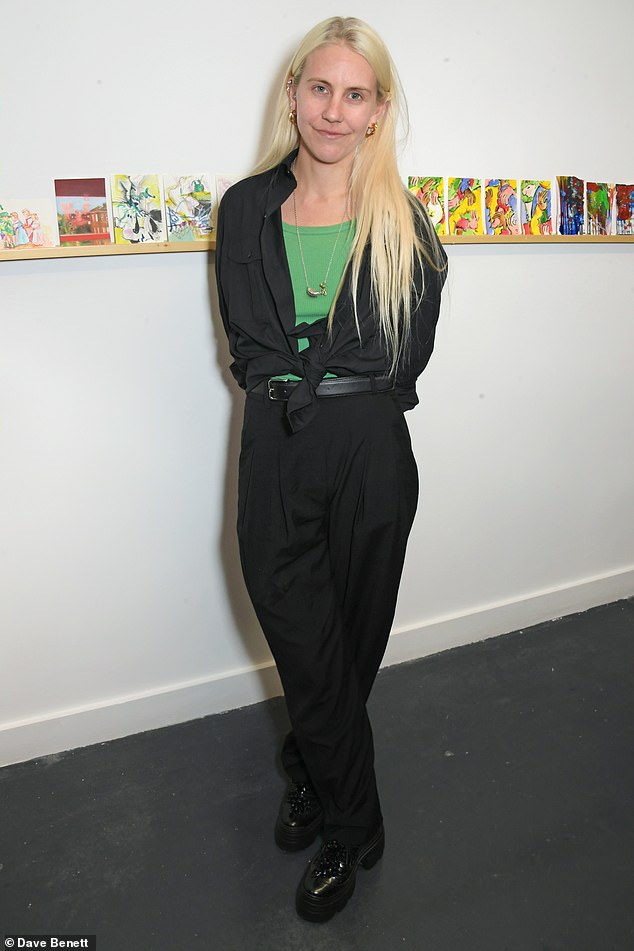 ‘That’s from growing up in Soho and being around a lot of people, so I’ve ended up with good judgment.’

She adds: ‘I only like hanging out with people who make me feel comfortable.’

Could a romantic novel be next in store for Trainspotting author Irvine Welsh, who has revealed he has become engaged to Taggart actress Emma Currie.

Twice-divorced Welsh, 63, announced the news — with a picture of his Scottish fiancée showing off the emerald sparkler with which he proposed. 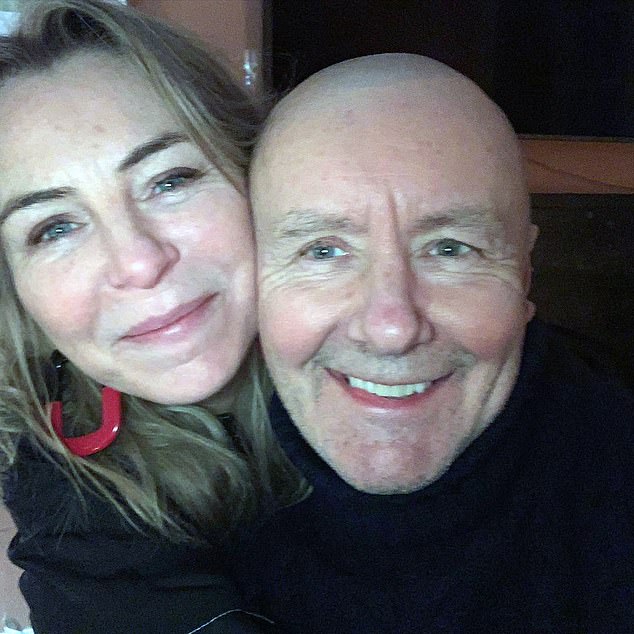 ‘P***ing wet day in Scotland but she said yes,’ the overjoyed Scot wrote.

Edinburgh-born Welsh says the couple enjoyed an ‘old-fashioned courtship’ after meeting up for socially-distanced coffees during lockdown.

Welsh split from American wife Beth Quinn in 2017 after almost 15 years together.

Liam’s pout with the Derry Girls

But behind the scenes, the Ballymena-born star was more concerned with delivering his best pout than law and order. 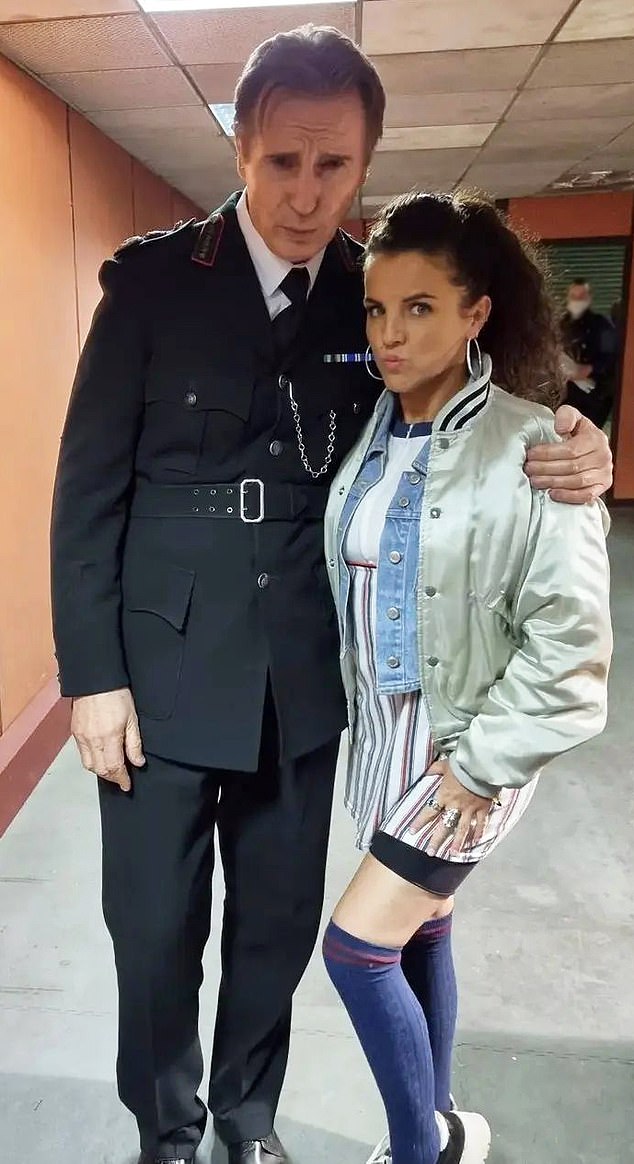 Liam Neeson pictured in a black uniform alongside Jamie-Lee O’Donnell, who plays Michelle Mallon in the show

Neeson, 69, was pictured posing in a black uniform alongside actress Jamie-Lee O’Donnell, who plays Michelle Mallon in the show.

The Taken star became a fan of the Northern Irish comedy, which returned this week for its final series, after being introduced to it by friend Helen Mirren.

Hunt is on for new leader of the Eton pack

I hear that Eton College has run into problems finding a new kennel huntsman to lead its controversial beagling club.

A rather desperate email plea has gone out to ‘Old Etonian Beaglers’, saying: ‘We are at the eleventh hour, and despite a very comprehensive and thorough search’, it has ‘failed to attract a suitable candidate’.

Applicants are required to ‘both hunt the hounds and help train others to do so’.

Perhaps potential huntsmen have been put off by the club’s recent past.

In 2016, the college was forced to conduct an investigation after animal welfare charity the League Against Cruel Sports claimed to have filmed an illegal hare hunt in North Yorkshire involving Eton’s beagling club.

It’s breakdancing only for Jo

Pity Jo Wood, who will be spending Easter — and the next three months — with her feet up due to a broken ankle.

‘It’s all due to me falling down a stone staircase holding my little nephew and breaking my ankle at Ronnie’s. And, no, I wasn’t drunk!’ 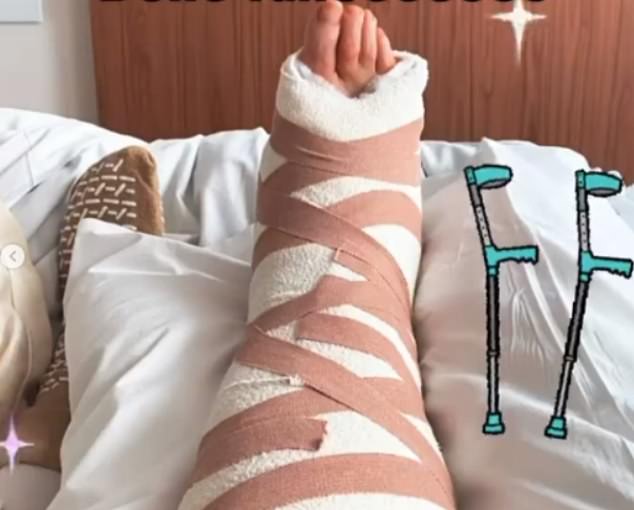 She quips: ‘I want to get better so I can see the Stones in Hyde Park this summer.

‘I want to say ‘hello’ to Keith and Patti — and limping along on one leg in an orthopaedic boot is not a rock ‘n’ roll look!’

Former Countdown star Nick Hewer will this Good Friday be seen in BBC’s new programme Pilgrimage, in which celebrities with different beliefs go on an emotional journey by treading ancient religious routes.

Yet I can reveal the retired presenter is struggling to walk away from his own spiritual ‘home’ in the South of France, where he has hosted the likes of Lord Sugar. ‘I have a house in the south-west, but it is up for sale,’ Hewer, 78, tells me. ‘I’ve had it for 32 years now. It will be a wrench to sell.’

Embattled Channel 4, which is facing a planned privatisation, may soon have another woe to worry about.

For I am informed that the broadcaster is at risk of losing one of its household names — Cathy Newman — to Rupert Murdoch’s new channel TalkTV.

The journalist, 47, whose explosive interview with clinical psychologist Jordan B. Peterson, has been watched more than 35 million times, making it Channel 4’s second most-viewed video ever, is said to be in ‘advance talks’ to join the channel, which launches later this month.

Newman refuses to comment when I approach her and tells me: ‘I’m actually on holiday at the moment, but will be back next week.’

Asa, who plays the show’s schoolboy sex therapist Otis Milburn, has almost £1.6 million in his company, up from £600,000 last year.

But paperwork for the company, which channels Asa’s earnings from ‘performing arts’, reveals £1.2 million of his fortune is held in cash at the bank.

Famed for his family’s luxury dining and exquisite cooking, Michel Roux Jr has now been reduced to flogging mail order dinner services for customers to cook at home.

The two-star Michelin chef, whose Mayfair restaurant Le Gavroche was downgraded to a dinner-service only last summer owing to staff shortages, is selling meals-for-two packages for £100.

Wimbledon 2022: Stars slam ‘Nasty Nick’ Kyrgios after he SPAT in direction of abusive...

Carole Middleton has hinted that she will be organising Easter egg hunts for the...