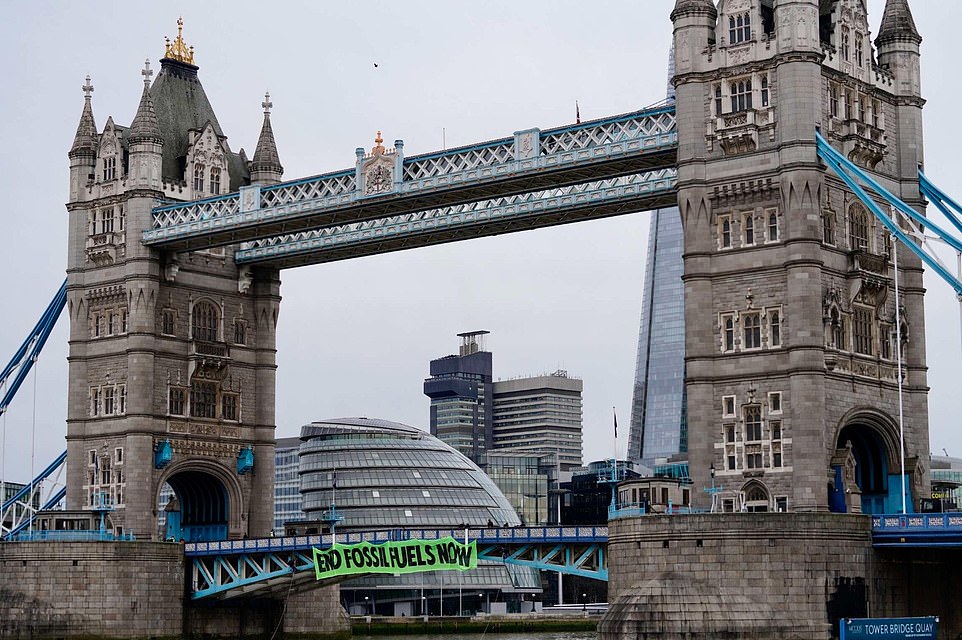 Eco-morons shut down Tower Bridge today by abseiling off the sides and hanging a banner over the Thames as police stood and watched.

Green zealots from Just Stop Oil and Extinction Rebellion brought central London to a standstill during the morning rush hour in a protest that would have created more pollution due to standing traffic.

One of the abseilers dangling from arguably the world’s most famous bridge appears to be serial protester Amy Rugg-Easey, a Labour-voting voting watchmaker and rollerskater from Newcastle upon Tyne who describes herself as a ‘rebel for life’.

She said today: ‘I ask myself why I do these things all the time, and the main thing that drives me is that I have tremendous hope and optimism in humanity’s ability to fight the climate crisis – but there are certain people who continue to prevent that for their own profit’.

Just Stop Oil and Extinction Rebellion have spent the past week blockading oil terminals and taking the air out of the tyres of fuel tankers as they try to damage petrol and diesel availability at petrol pumps across England. In Essex some of the activists have dug tunnels under a refinery and are back in Grays this morning.

It comes ahead of the planned daily ‘mass participation’ protests from London’s Hyde Park this Saturday, threatening to shut down parts of London every day until Easter, with police forced to arrest 400 supporters in the past eight days.

Tower Bridge was taken over shortly after 7am as several protesters abseiled off the side. A bright green banner was then unfurled declaring: ‘End fossil fuels now’. Another group then walked into the middle of the bridge to stop traffic. Footage showed Met officers standing on the bridge as a protester abseils off the side.

Police then shut down the route – one of only a few ways to cross the Thames is east London – causing long queues. People caught in the chaos branded them ‘selfish’. One victim tweeted: ‘On my way to work at a hospital and these lot think it’s ok to block Tower Bridge for all traffic’. 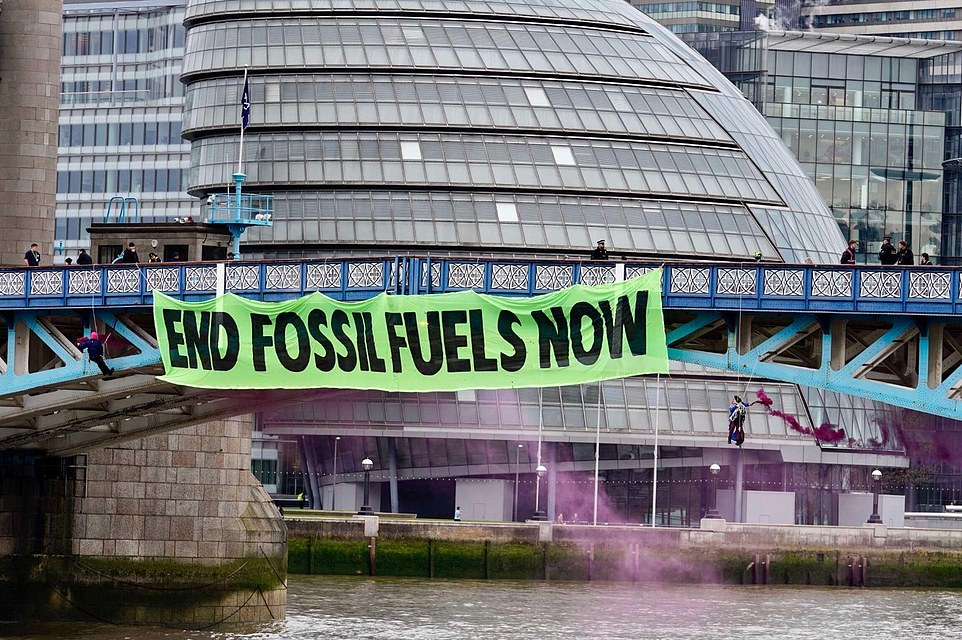 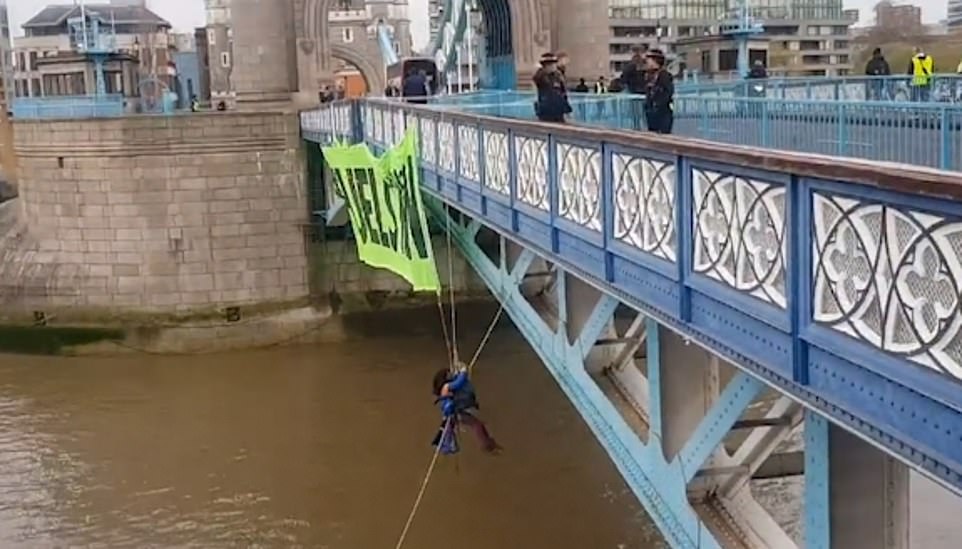 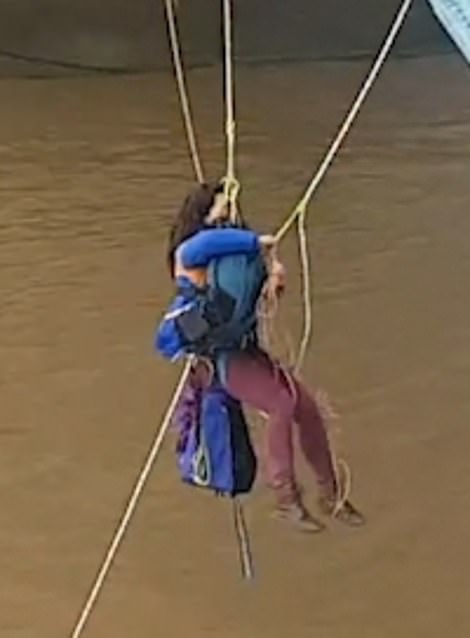 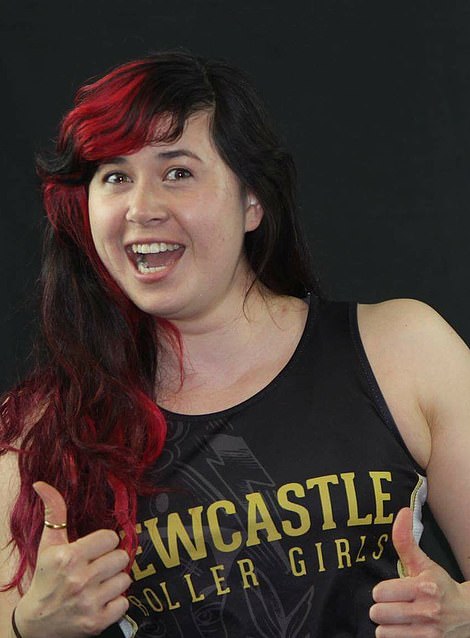 People are questioning how protesters were able to shut down central London again. One of the abseilers appears to be a serial protester Amy Rugg-Easey (picture), a Labour-voting voting watchmaker and rollerskater from Newcastle upon Tyne who describes herself as a ‘rebel for life’ 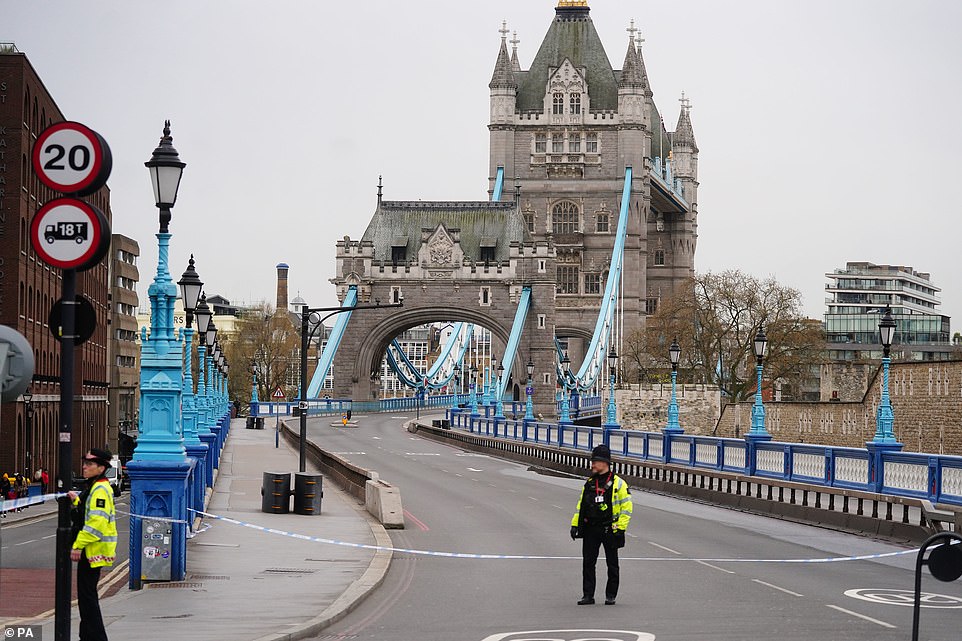 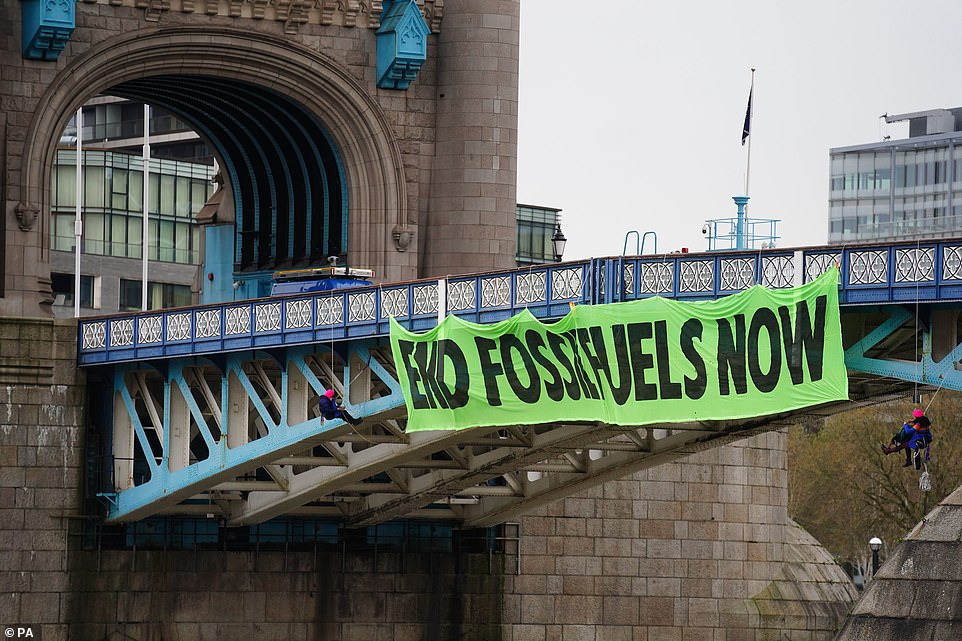 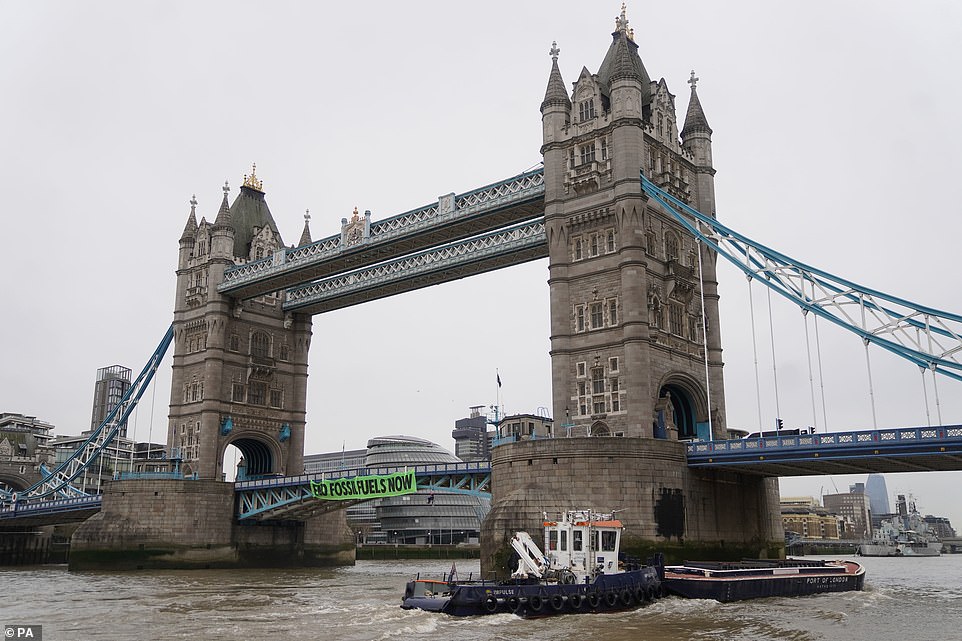 A tug passes under the bridge. But the protest prevented larger ships getting through because Tower Bridge opens

The action has taken place at the gateway to the City of London, XR said, accusing the Square Mile of being the root source of fossil fuel funding in the UK.

The group said that their ‘April Rebellion’ begins tomorrow at 10am in Hyde Park.

People will gather at Speaker’s Corner every morning for a week or more at the same time, where members will offer ‘trainings in nonviolent civil disobedience and resistance tactics before marching into London to block areas of the city for as long as possible’.

Just Stop Oil, which is linked to the larger Extinction Rebellion group, said yesterday more than 400 activists have now been arrested over the protests which began last week as they continue to disrupt oil facilities amid demands that the UK Government ends all new oil and gas projects in Britain.

Some 15 members of the Just Stop Oil group were arrested on Thursday morning over the protest at Kingsbury oil terminal in Warwickshire which began at 0.40am as they try to impact fuel availability at petrol pumps across England.

The group said more than 400 activists have now been arrested over the protests which began last week as they continue to disrupt oil facilities amid demands that the UK Government ends all new oil and gas projects in Britain.

Campaigners have since shared the awkward nature documentary-style video to their social media channels.

The video opens with the activist calling himself David Attenborough Junior Junior Junior and stating: ‘Welcome to another episode of Black Planet.

‘We’re here looking at the devastation that the black stuff that the homo sapiens love so much but is ultimately going to kill them all.

‘I’ve been around the planet and seen many species but never have I seen an animal that so vehemently wants to kill itself. So I’ve come to this Kingsbury Oil Depot to see a few homo sapiens fighting for their lives in an attempt to just stop oil.’ 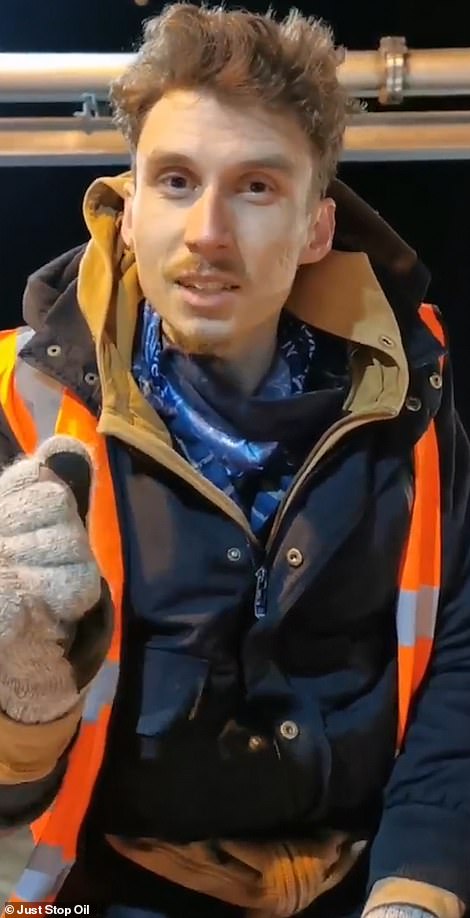 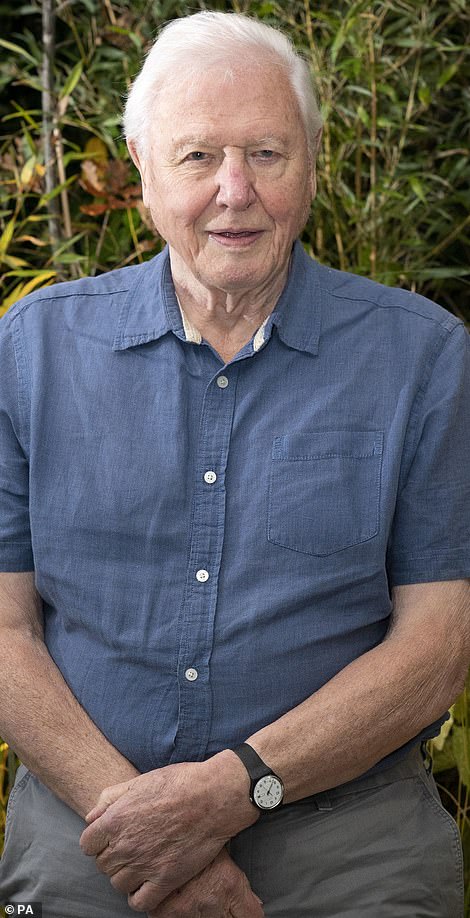 No relation: An anti-oil activist (left) who locked himself to a tanker at an oil depot has shared a toe-curling video of himself impersonating Sir David Attenborough (right) slamming ‘homo sapiens who want to kill themselves with the black stuff’

It is unknown if the campaigner in the video is among those who were arrested but the group claims there are still some activists on site.

Just Stop Oil – which is linked to the larger Extinction Rebellion group, whose demonstrators have also been taking part in the past week’s protests – said it had also set up a roadblock yesterday at an entrance to a nearby BP oil depot.

The group said operations at the Navigator oil terminal in Grays, Essex, were still suspended due to its occupation – and it comes ahead of the planned daily ‘mass participation’ protests from London’s Hyde Park this Saturday.

Extinction Rebellion has warned that these protests will be ‘more disruptive than ever’ and they are ‘expecting huge numbers’, adding: ‘We won’t have pink boats, we won’t have pink tables, we will just have people power.’

Also this morning, a group of protesters from the ‘Doctors for XR’ offshoot held a demonstration outside the Treasury building in Westminster in protest against fossil fuel finance and subsidies.

Meanwhile, UK motorists continue to suffer at the pumps with petrol prices hitting record levels in recent weeks after Brent crude oil hit a high of $128 last month – up from lows of $19 seen at the peak of the pandemic.

Warwickshire Police said more than 100 arrests have been made over the past week amid the Kingsbury protests – with an additional 15 arrests made overnight for offences including criminal damage and going equipped.

The force said a ‘large policing presence’ remained in the area today, and all 15 of those arrested were in custody. The oldest people arrested today were two women both aged 71, while the youngest was a 25-year-old man.

More ice and snow on its way as five-day cold snap batters the UK...