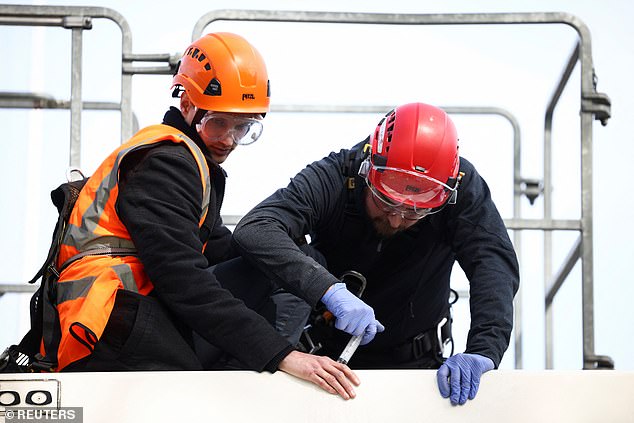 Eco zealots who glued themselves to the top of a fuel tanker lorry on one of London‘s busiest roundabouts have been removed by a crane.

The Just Stop Oil protest happened in Chiswick, just after 8am ahead of a busy weekend for travel for Easter.

The Eddie Stobart vehicle was effectively hijacked as four people sat on top stuck to it.

They surrounded the lorry before disabling the controls and clambering onto it and gluing themselves on.

Colleague Cameron Ford – last previously seen as an Insulate Britain spokesman – openly mocked the police officers who were just feet away from the ground.

It was only after four hour that a crane had to be used to removed them and bring them down.

Ford had posted a video where he had declared: ‘Welcome to Black Planet, with me your host David Attenborough Jnr Jnr.

‘Here we have the strange homosapiens that wear the yellow jackets and the black jackets and they follow the orders knowing full well that the orders that they’re given will ultimately kill everything they love.

‘Instead they continue to protect the cans of black death and the fossil fuels demands because they just love money so goddamn much.

‘We hope one day these strange homosapiens will realise they are actually f****** everything up including their own lives and they will turn around to the government and say “No more, no more”.’

A police officer tries to unglue the hand of a demonstrator on top of a fuel tank truck, during a protest of Just Stop Oil 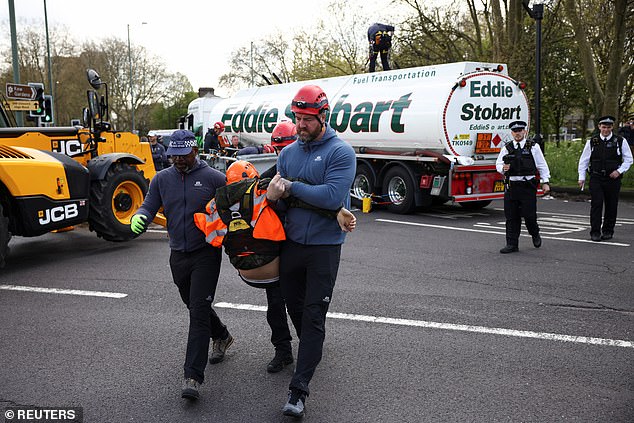 Police officers remove a demonstrator during a protest of Just Stop Oil, at thr roundabout in west London 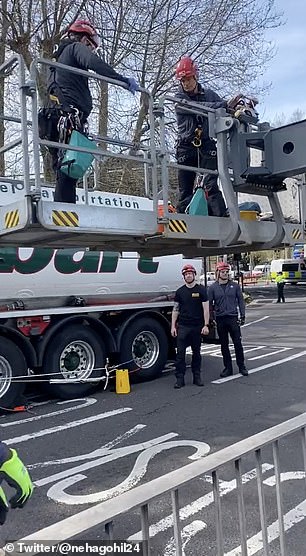 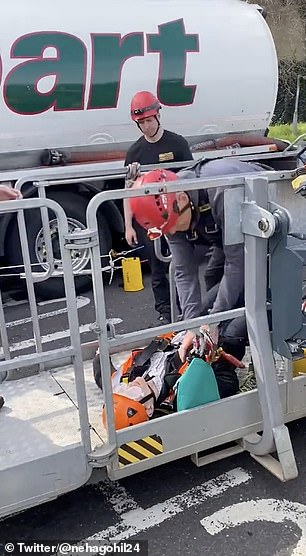 Crane and able: The eco zealots are finally removed by experts after they glued themselves on 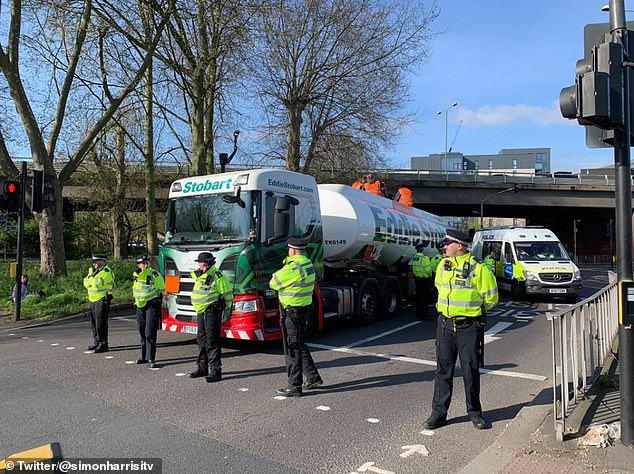 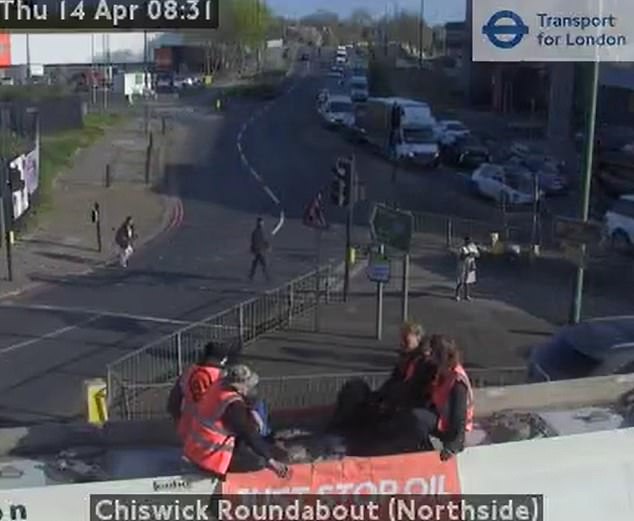 The protest was captured on traffic cameras on the Chiswick roundabout just after 8.30am

Police at the scene appeared to be completely unaware they were being humiliated by the person in front of them.

Hounslow Police tweeted: Road closures are currently in place at the Chiswick Roundabout.

‘Diversions are in place. Please avoid the area if possible.’

Yesterday dozens of Extinction Rebellion activists glued their hands to the London HQ of Shell while hundreds marched on Buckingham Palace.

Video shared by XR showed two activists with their hands down on a reception desk with the logo of oil giant Shell visible in the background. Other pictures show three people holding XR signs saying: ‘Insiders wanted’.

Sharing the footage on their Twitter page, XR said: ‘Ordinary people have glued to the reception Shell HQ in London as protestors fill the lobby and surround the building.’ 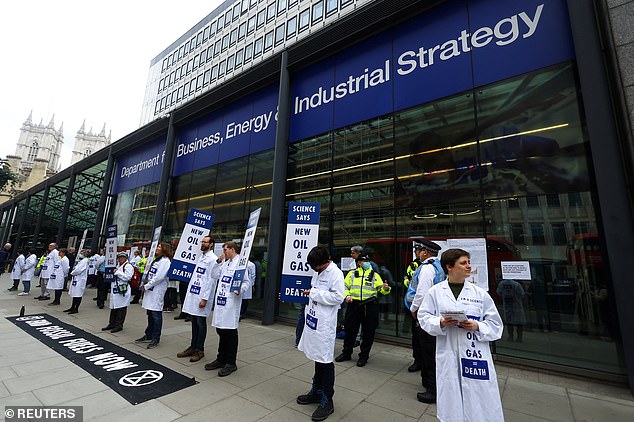 Activists from Extinction Rebellion at Department for Business, Energy and Industrial Strategy 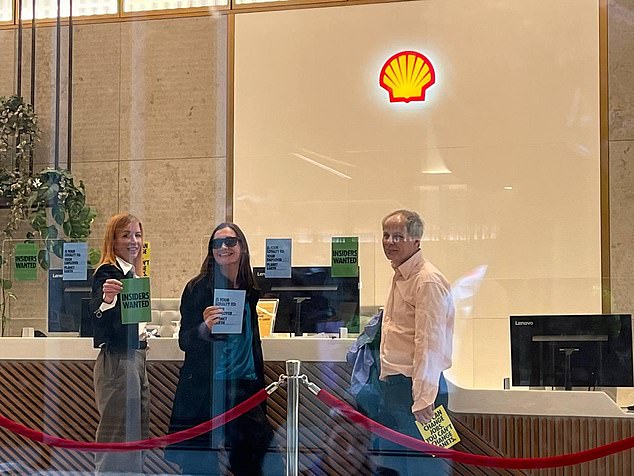 In the video, one of the protestors says: ‘We are here to talk to HR, because we feel like there is not much point in talking to people at a corporation like this because those people clearly have not got any idea what is going on.’

A security guard then arrives and asks if they have glued themselves to the desk, with the protestor replying: ‘We have, yes.’

Outside, one hundred people from XR held up a placard with the name of an individual Shell employee and the words ‘Please Join Us’, while activists also handed out flyers to staff urging them to ‘switch to the right side of history, before Shell turns toxic on your CV’.

Another group positioned a fireman’s trampoline below the office windows bearing the message: ‘Jump Ship’.

While the protests took place in and outside the Shell building, another group who said they were scientists, superglued themselves to an entrance of the nearby Department for Business, Energy and Industrial Strategy as they continue to call for immediate action on climate change.

He was photographed on his 31st birthday being dragged away from blocking the M25 last year – one of several such protests he had joined, frustrating tens of thousands of drivers.

MailOnline revealed that in the two years before his activism Ford has indulged himself not once but twice in lengthy trips abroad.

When approached about his travels Ford admitted he was a hypocrite but was unrepentant about his protests. 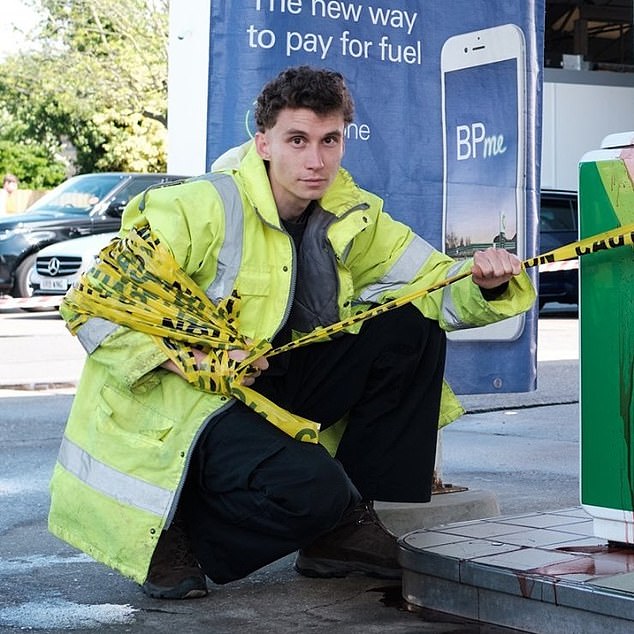 Cameron Ford, 31, is a regular on the Insulate Britain protests that have blocked the M25, causing fury and mayhem for drivers 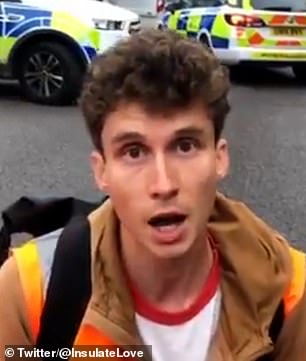 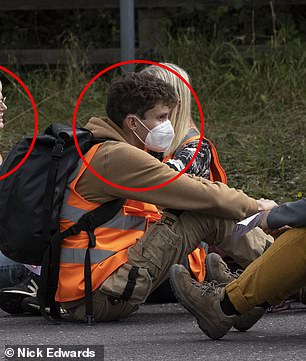 He went on a 10,000 mile four month trip across the Atlantic and around Canada – then just months later on a 2,000 mile plus jaunt across much of Europe in an old diesel van.

The fossil fuels burned and the resulting carbon emissions generated by Ford’s two trips would have been more than double the entire annual carbon footprint a single person in many countries produces in an entire year.

Yet no sooner had he returned from the second trip than he was lecturing others. 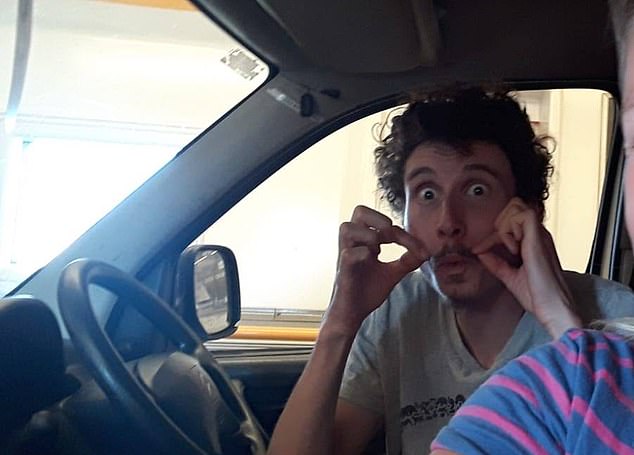 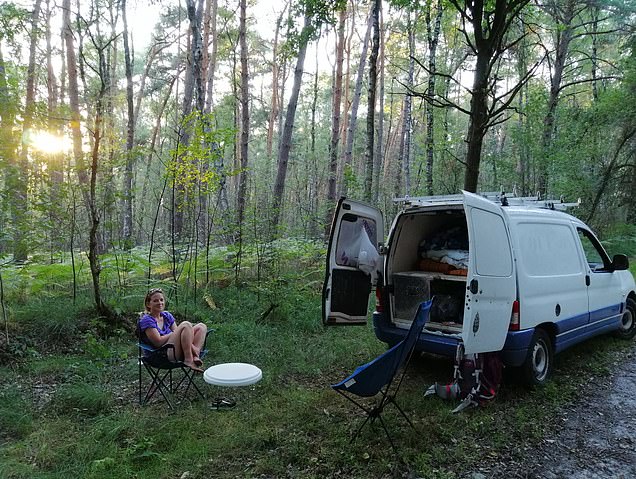 His incredible carbon-busting holiday marathon began in the autumn of 2019 as Ford embarked on a four month jaunt across Canada which involved a round trip of 8,500 miles in flights alone.

He then travelled extensively around Canada for 120 days, posting occasional updates of him having fun in Edmonton, ice swimming in a lake in Alberta, and later sledging in British Columbia. These are just the locations he posted about but they alone mean he must have travelled at least 1,500 miles within Canada too on top of his flights – taking the entire distance travelled over 10,000 miles.

And regularly while he was enjoying this trip of a lifetime, despite its negative effects on the environment, Ford – apparently oblivious to the contradiction – was also regularly posting content promoting Extinction Rebellion and its twin pressure group Insulate Britain.

He took this trip despite research published just weeks before he embarked showing that just a single long-haul flight generates more carbon emissions than an average person in many poorer countries consumes in a whole year. 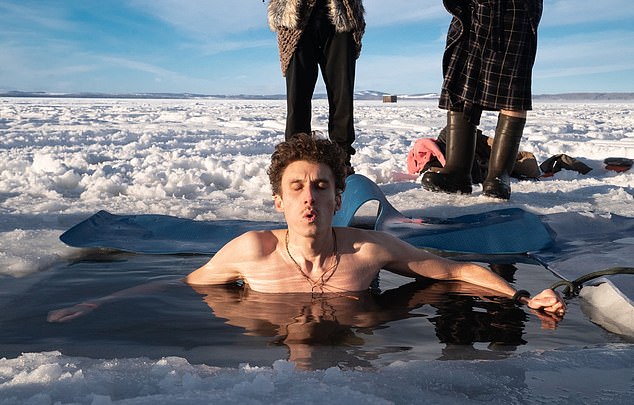 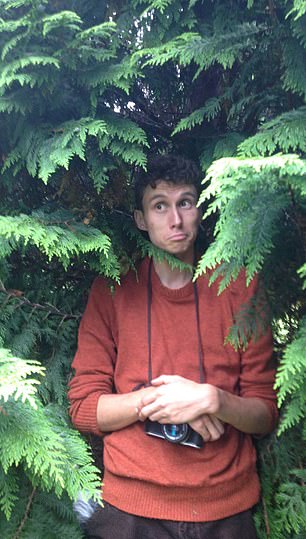 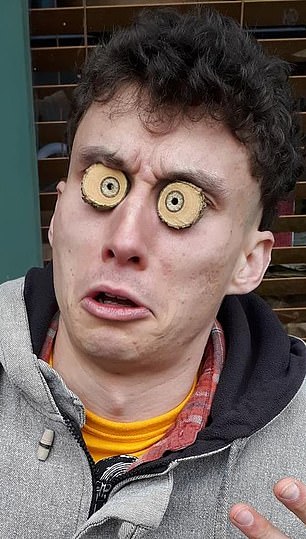 He finally returned to the UK in January 2020 but had only been back a matter of days when he began planning his next international trip – again apparently oblivious to the personal contributions to global warming this would inevitably cause.

On January 15 he was asking advice about what van to buy for his next trip. It’s not clear what he went on to spend but by August he had clearly not only bought a van but driven it many thousands of miles around continental Europe.

In an album he entitled ‘From Whittlesford to Warsaw’ on August 29 he posted 25 pictures showing himself and a female companion cavorting around a series of exotic locations during the previous weeks visibly enjoying themselves at each.

The direct trip between the two places would involve a round trip of well over 1,500 miles driving – and it’s plain that Ford took many pleasure-driven deviations. This means he would have generated at least 380kilos of carbon.

Perhaps he used a modern low-emission vehicle? No – quite the contrary. The same “lovely little van” he used for the trip, a diesel-powered Citroen, he then offered for sale in January this year by which – no doubt boosted by Ford’s penchant for globe-trotting – it had an astonishing 145,000 miles on the clock.

Once back in England Ford then saw no contradiction in stopping other motorists – most of whom would have been driving much shorter distances with more compelling reasons than he just had – being able to move around.

Centrelink cash payments for Australians as cost of living soars

Airbnb host barges into LA apartment while a guest is staying telling her to...