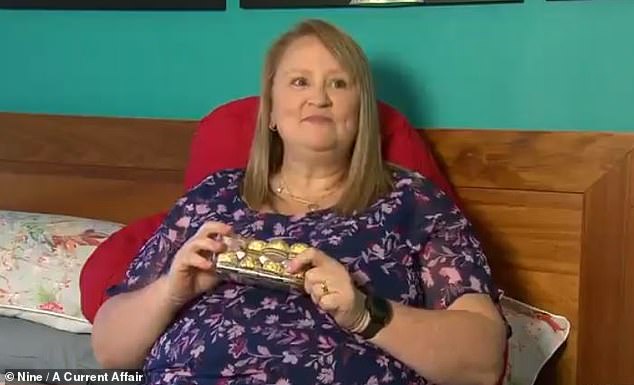 A chocoholic has made a remarkable about face after she reached out for help to break her secret, confectionary-guzzling addiction.

Melbourne mum Luana Tyne on a given day tucked into one packet of Tim Tams and three family blocks of chocolate.

A bucket of M&Ms, a bowl of  Maltesers and Ferrero Rochers are not spared either, but when Easter time rolls around her habit goes into overdrive.

‘I hate it, it’s out of control. It’s an addiction. I don’t know how I got this bad,’ Luana Tyne told A Current Affair.

The 48 year old likened her chocolate habit to stopping for a ‘cigarette or a coffee’.

‘It is socially acceptable. You can do it at work, you can do it in the car and no one looks at you twice,’ Ms Tyne said.

She has even resorted to hiding her sweets around the house from her family, in draws, bookshelves and pantry crevices.

Her daughter would often catch her mum eating chocolate in the wee hours of the night, and has been called upon to fetch her some from the shops.

Ms Tyne said her problem is that she keeps eating it even though she knows it doesn’t feel happier. 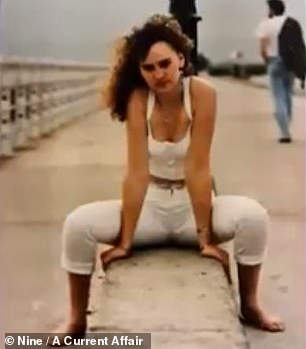 Adding to her woes is that her she suffers from joint pain, which is exasperated by her chocolate indulgence.

Her enslavement to the sweets has also hit the hip pocket hard and has made her feel ‘depressed and ashamed’.

Ms Tyne admits that she was strong in a lot of areas, but ‘not this’.

Hypnotherapist and habit-breaking specialist Mark Stephens said he had a 15-20 minute method to assist the helpless mum.

Mr Stephens, who has treated hundreds of addicted eaters, sat Ms Tyne down to do some subconscious therapy on her.

The change was immediate, as the self-confessed chocoholic came out of the session feeling sick at the thought of eating the milky snack.

‘I just see damage now,’ Ms Tyne said as she surveyed mounds of chocolate around her. ‘I see what it was doing to me clearly now.’

Her daughter would often catch Ms Tyne eating chocolate in the wee hours of the night, and has been called upon to fetch her some from the shops.

The mum said she felt horrible at the thought of chocolate, didn’t want to even look at the packets and claimed her life had changed.

The hypnotherapist rejected the idea that Ms Tyne would return to her sweet-devouring ways after a while.

‘This is a permanent fix, Luana will never want to touch chocolate again,’ Mr Stephens said.

Ms Tyne was able to drop off her large chocolate stash at a nursing home, and as of Good Friday revealed she was still giving the confectionary a wide birth.

Kourtney Kardashian and Travis Barker put on a loved up display as they hold...

Glastonbury through the ages: Fascinating pictures of Britain’s foremost music festival since 1970