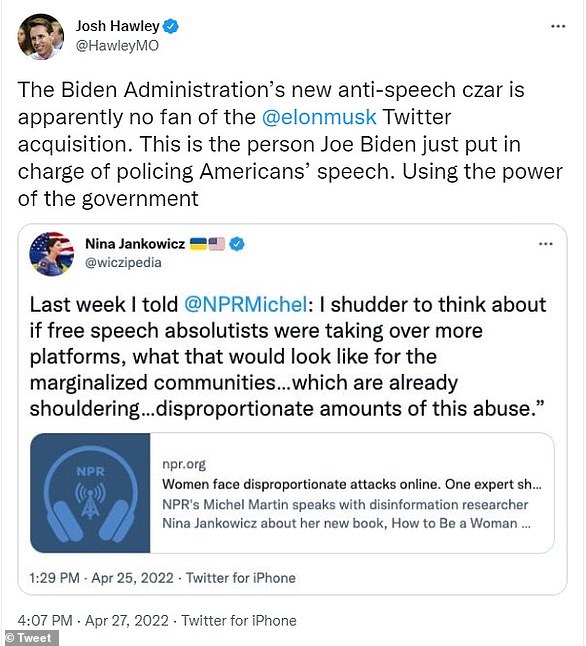 President Biden has set up a ‘disinformation’ board headed-up by a woke so-called expert who’s against free speech and tried to pour cold water on the Hunter laptop scandal.

Homeland Security Secretary Alejandro Mayorkas did not disclose any powers that would be granted to the dystopian-sounding board while addressing lawmakers on Wednesday.

He explained that the board would work to tackle disinformation ahead of the November midterms, particularly in Hispanic communities.

But Mayorkas did say that the new board would come under the Biden-era Center for Prevention Programs and Partnerships (CP3), meaning it would have no powers to crack down on disinformation and will instead try to combat it by throwing money at what it sees as problems.

The (CP3) program provides communities with resources and tools to help prevent individuals from radicalizing to violence. Last year, CP3 awarded about $20 million in grants through its Targeted Violence and Terrorism Prevention Grant Program. It is unclear how much cash will be spent on the Disinformation Board.

Mayokras noted that the focus of the new board would be to stop the spread of misinformation in minority communities, including election misinformation ahead of the 2022 midterms.

He added that it would focus on the latest trend of misinformation allegedly targeting Spanish-speaking voters. No further details on the exact misinformation being deployed against these communities was shared.

Jankowicz, who revealed she was the head of the department following Mayorkas’ meeting with lawmakers, tweeted: ‘Cat’s out of the bag: here’s what I’ve been up to the past two months, and why I’ve been a bit quiet on here. 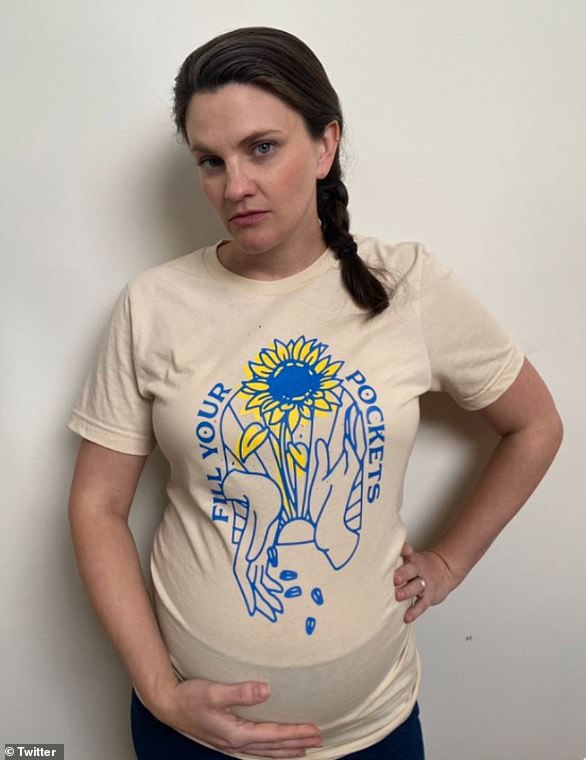 Jankowicz is eight months pregnant with her first child, and is an extremely prolific tweeter

Sec. of Homeland Security Alejandro Mayorkas says a “Disinformation Governance Board” is being created to counter misinformation. pic.twitter.com/Qysmy0kGTP

Nina Jankowicz had already made a name for herself before being appointed head of Biden’s Russian disinformation unit.

Jankowicz, 33, is a successful author who is currently eight months pregnant with her first child. She grew up in New Jersey and is dating Michael Stein.

The couple are happily shacked up in a $1 million, three-bedroom, two-and-a-half bathroom property they own in Arlington, Virginia.

She managed programs to Russia and Belarus at the National Democratic Institute.

But the author is best known as a prominent woke voice online.

The Biden appointee’s latest book, How To Be A Woman Online has just been released, and deals with the topics of internet bullying and trolling.

She has complained about hordes of men tracking down her private Facebook and Instagram accounts after she appears on TV to try to follow her and find out more about her life.

Jankowicz says she prefers strangers to follow her Twitter account, and speculates that many of those who criticize her online are jealous of her ‘verified’ blue check mark and media career.

She has identified five different types of trolls who target her most, including ‘reply guy’ types who insist on trying to meddle in all aspects of her life, including in how brown she toasts her bread.

Despite claiming to be a free speech campaigner online, Jankowicz has spoken out against the First Amendment.

Aligning herself with many online progressives who’ve begun to call for an end to unqualified free speech, Jankowicz recently tweeted: ‘I shudder to think about if free speech absolutists were taking over more platforms, what that would look like for the marginalized communities…which are already shouldering…disproportionate amounts of this abuse.’

She also said the prospect of Elon Musk taking over Twitter made her ‘shudder.’

But Jankowicz – who has a pet dog and a cat – has not joined thousands of other liberals who’ve vowed to quit the platform as a result of Musk’s purchase.

‘Honored to be serving in the Biden Administration @DHSgov and helping shape our counter-disinformation efforts.’

She added that ‘a HUGE focus of our work, and indeed, one of the key reasons the Board was established, is to maintain the Dept’s committment (sic) to protecting free speech, privacy, civil rights, & civil liberties.’

This is causing questions over Jankowicz’s ability to accurately judge disinformation now that several sources have come out confirming the validity of Hunter’s laptop.

Jankowicz also suggested last week that she opposes the The First Amendment because she thinks it is bad for ‘marginalized communities’ and called Elon Musk a ‘free speech absolutist’ because he wants to make Twitter more open to all voices.

The Department of Homeland Security did not immediately respond to DailyMail.com’s request for comment.

Jankowicz is a fellow at the Wilson Center where she studies the ‘intersection of democracy and technology in Central and Eastern Europe’. She is also the author of How To Lose the Information War: Russia, Fake News, and the Future of Conflict.

When stories about Hunter Biden’s laptop started emerging, several outlets, social media sites and left-leaning disinformation experts claimed that it was just misinformation coming from Trump and others on the right.

In an October 2020 report, Jankowicz shared her skepticism of the contents of the laptop and the claims it belonged to Hunter.

‘We should view it as a Trump campaign product,’ she told the New York Daily News at the time.

Twitter repeatedly took down the Hunter Biden laptop story and prevented it from being spread on the platform.

‘Free speech is the bedrock of a functioning democracy, and Twitter is the digital town square where matters vital to the future of humanity are debated,’ Musk wrote in a statement upon the purchase approval.

‘I shudder to think about if free speech absolutists were taking over more platforms, what that would look like for the marginalized communities,’ she said.

She said these groups are ‘already shouldering…disproportionate amounts of this abuse’ and said free speech and lack of censoring on social media would make it worse.

Missouri Republican Senator Josh Hawley tweeted an image of her remarks to NPR with the caption: ‘The Biden Administration’s new anti-speech czar is apparently no fan of the ⁦ @elonmusk⁩ Twitter acquisition.’

‘This is the person Joe Biden just put in charge of policing Americans’ speech. Using the power of the government.’

Jankowicz has advised the Ukrainian government on strategist communications – she also managed democracy assistance programs to Russia and Belarus.

She received her masters in Russian, Eurasian, and East European Studies from Georgetown University’s School of Foreign Service, and her bachelors degree from Bryn Mawr College.

‘Elon will smile all the way to the bank’: Mark Cuban says Musk is...

Florida boy, 10, accused of threat to shoot up school is being held in...

Wendy Williams, 58, takes the arm of a young male companion as she leaves...