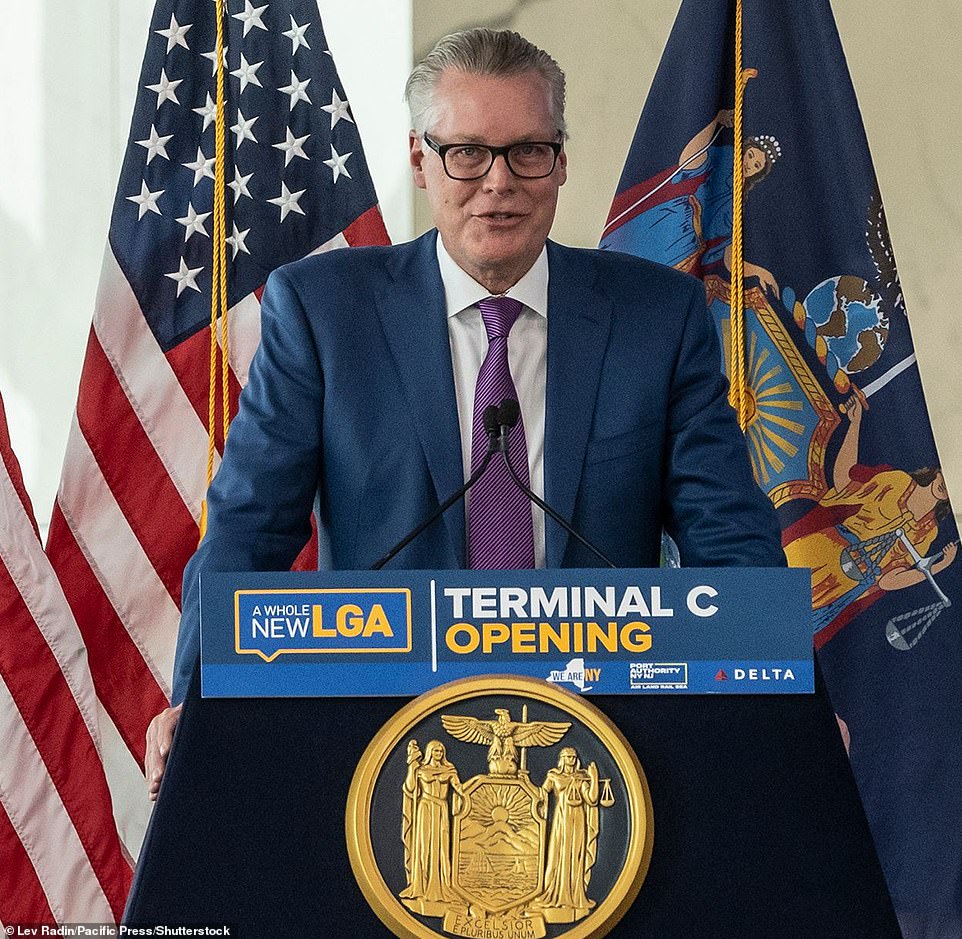 The CEO of Delta Airlines has issued an apology for ‘unacceptable’ flight cancelations as some customers in Grand Rapids, Michigan, were offered $10,000 for being bumped off as the nation braces for its busiest travel weekend since the pandemic.

Delta head Ed Bastian told customers that the airline would be adding extra boarding times, improving crew scheduling and bringing on workers after canceling 49 flights and delay 142 so far on Friday.

‘We’ve spent years establishing Delta as the industry leader in reliability, and though the majority of our flights continue to operate on time, this level of disruption and uncertainty is unacceptable,’ Bastian wrote in a letter to frequent flyer clients.

‘Things won’t change overnight, but we’re on a path towards a steady recovery.’

The apology comes as airlines grip with the hectic Fourth of July weekend travel, with 236 flights within, into, or out of the U.S. already cancelled on Friday morning, and 971 flights delayed.

In addition to airport chaos and heavy traffic, holiday travelers will have to contend with higher prices. Average gas prices have soared 56 percent from a year ago, mid-range hotel prices have increased 23 percent, and average lowest airfares are up 14 percent.

In total, AAA projects that 47.9 million Americans will travel for the Fourth this year, up 3.7 percent from last year and close to the historic peak reached in 2019, before the pandemic struck. 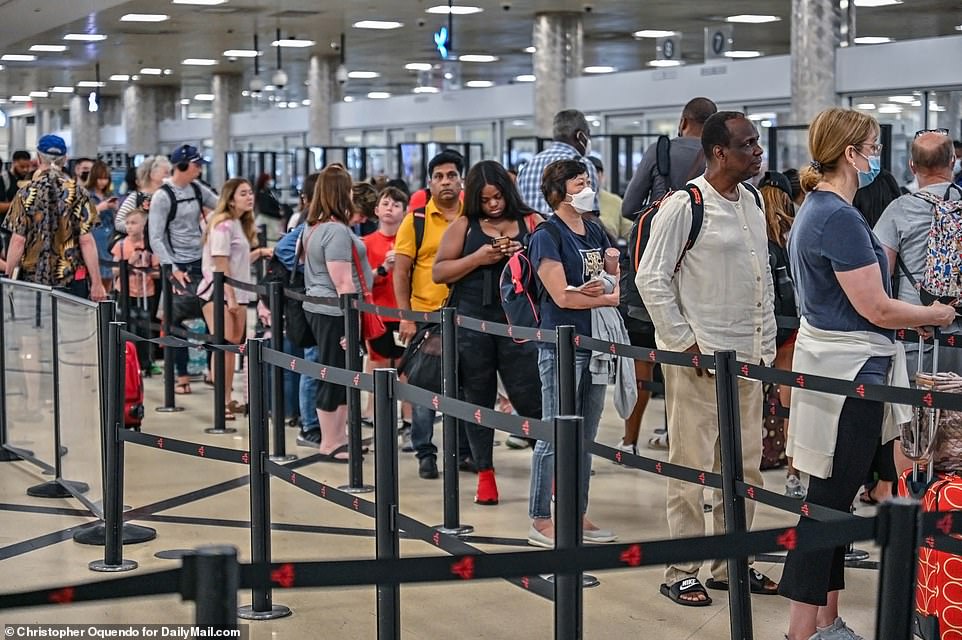 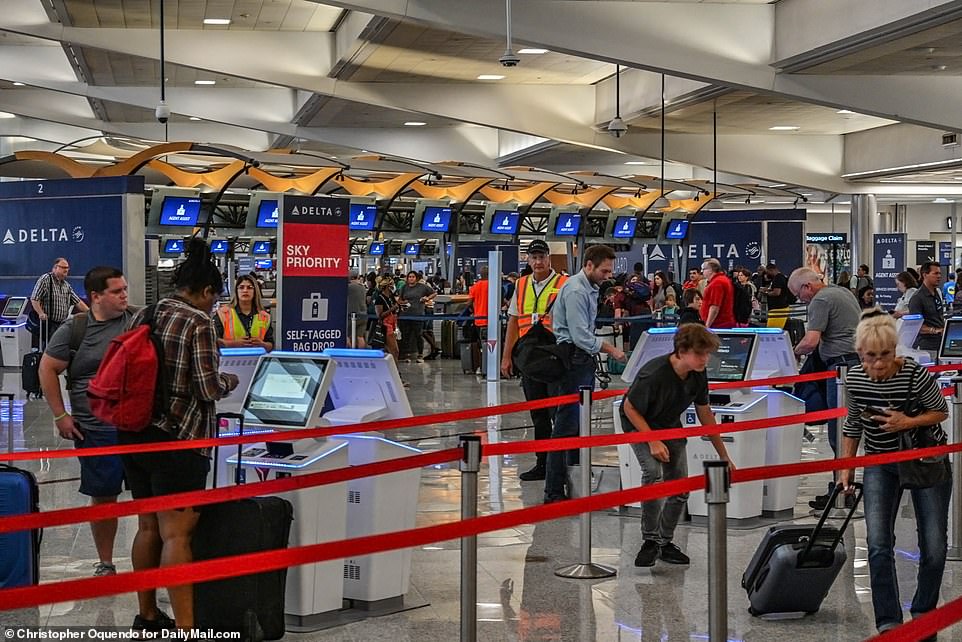 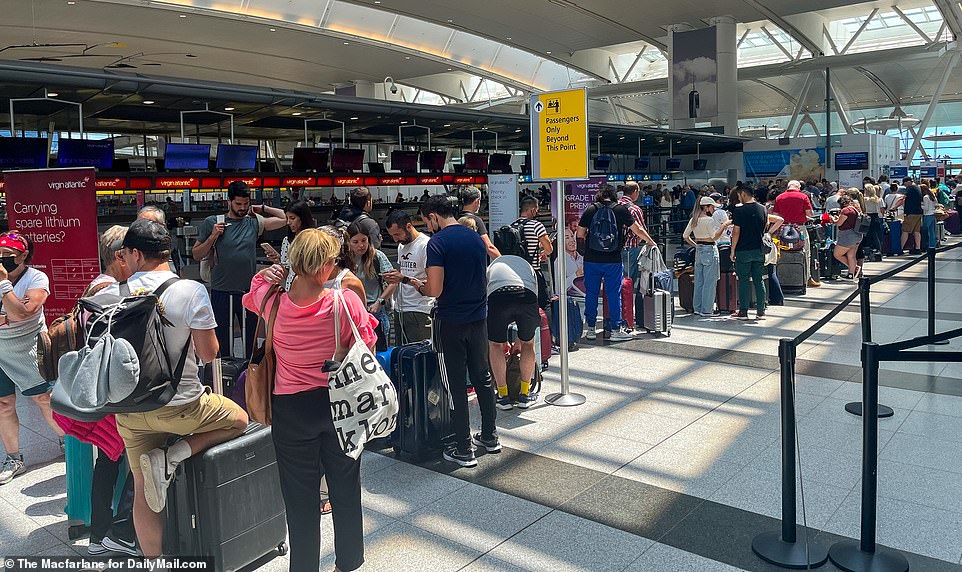 General view or travelers in JFK Terminal 4 in New York. KLM airlines is seen with long lines as people wait to check in 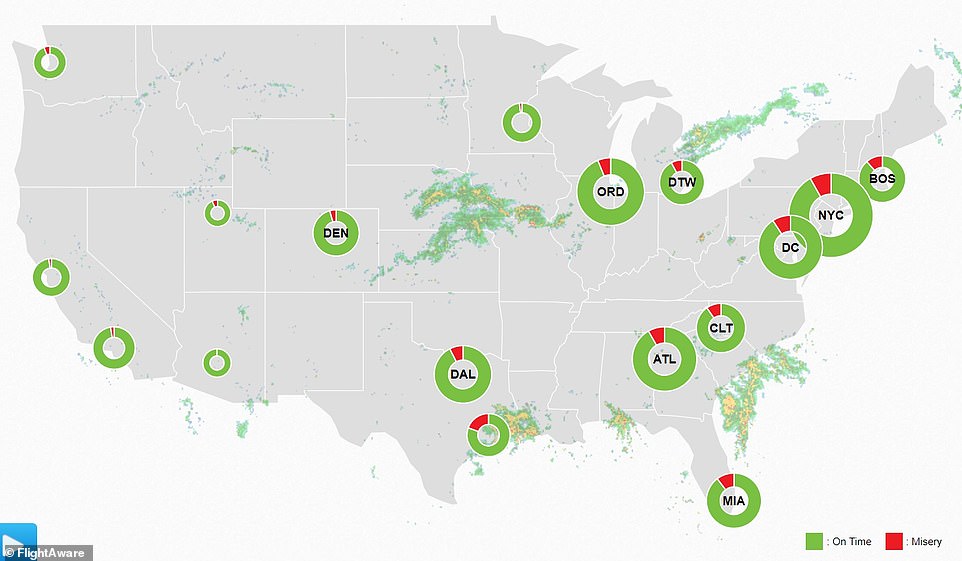 According to flight aware, major airports New York City, Washington D.C., Miami, Atlanta, Chicago and Dallas are seeing the most delays and cancellations on Friday 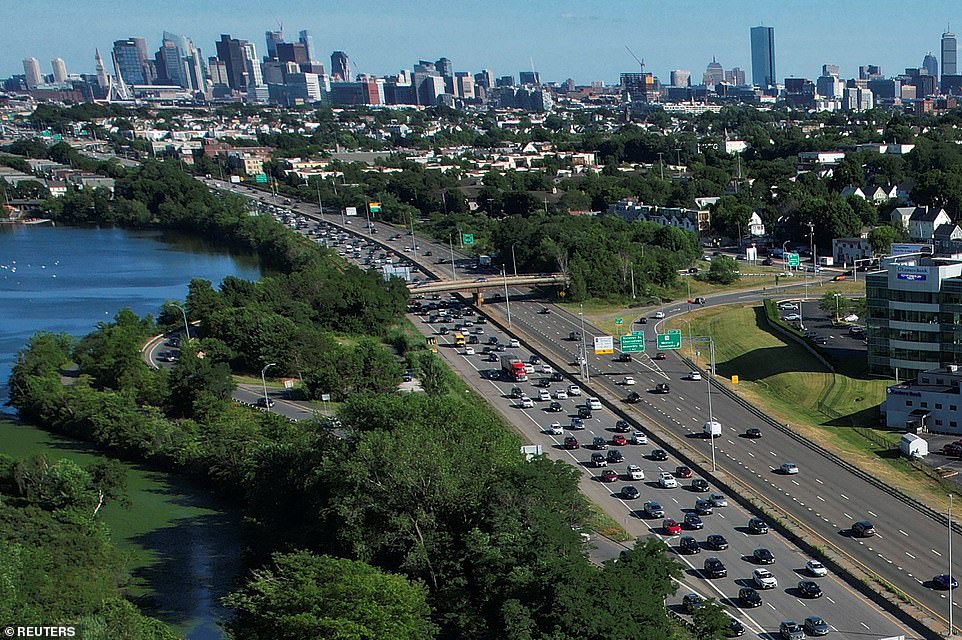 Fourth Of July travel by the numbers

Here’s how the travel projections for this holiday weekend stack up against last year, according to AAA:

Leading in cancellations so far was Delta Airlines, which has also delayed 142 flights, and the airline is reportedly compensating customers with large sums of money in a flight from Grand Rapids to Minneapolis.

The flight, set to depart from the Gerald R. Ford Airport on Monday, was oversold, and customers were informed that the airline would be offering up to $10,000 to anyone who exited the flight and chose to fly at a later date, KTVB reported.

Jason Aten, a tech columnists, tweeted about the deal, telling the local outlet that he was travelling with a group of six who all rejected the payout in favor of flying on time.

Todd McCrumb, of Boise, Idaho, said he, too, was offered the huge sum.

‘It’s a true story,’ McCrumb wrote on Twitter. ‘I was on that flight!

‘Unfortunately, I could not take advance the offer, as I was flying with my wife who has very limited eyesight. She has to have me nearby when traveling.’

McCrumb told KTVB that he was traveling to West Michigan for a high school graduation ceremony, and that he and other passengers thought the offer was a joke.

He added that he did see several people accept the offer, but he was unsure about how much they really did receive.

One woman with the handle Marie wrote on Aten’s thread that she took the payout, but rather than the $10,000, she and another passenger she was traveling with got $1,000 each.

Delta did not confirm whether or not passengers were given thousands of dollars to be bumped off the flight, but noted that the airline’s gate agents have the power to do ‘whatever is necessary’ to get flights out on time.

Delta customers in Grand Rapids, Michigan, said the were offered thousands to get off a flight that had been overbooked for Minneapolis 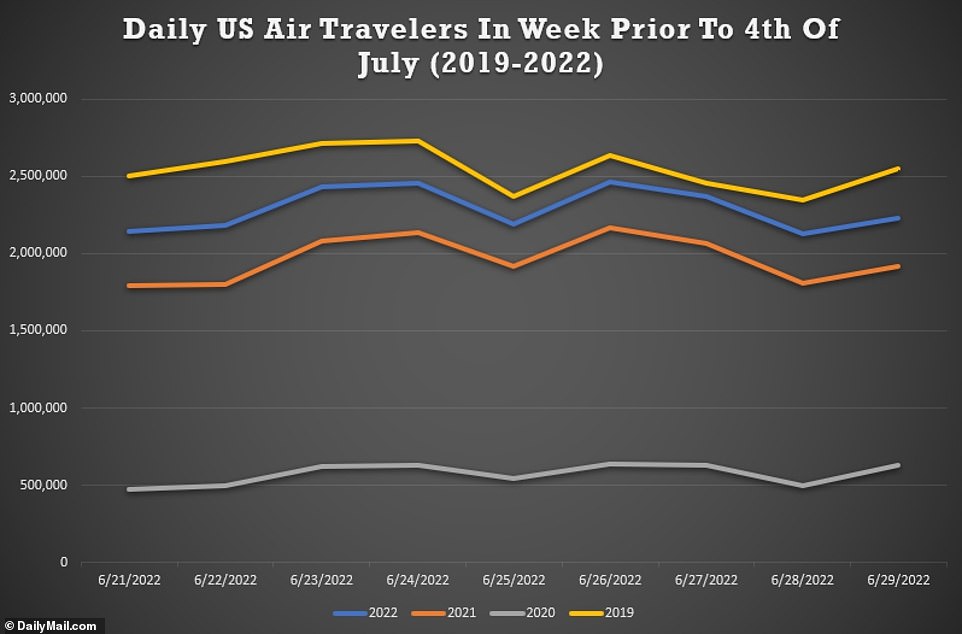 In the week leading up to the Fourth, the number of air travelers has almost returned to 2019 levels, TSA data show

Travel through Delta is likely to be further complicated after its pilots started picketing on Thursday at several major airports including LAX, JFK and Atlanta, demanding better contracts as crews are allegedly overworked during the holiday rush.

While Delta pilots are on strike, American Airlines CEO Robert Isom said on Thursday that its pilots were getting a 17 percent raise, CNBC reported.

The deal comes less than a week after United Airlines and its pilot’s union reached an agreement to raise wages by 14 percent within 18 months.

United’s pilot’s union said it hold a special meeting next week to evaluate the airlines offer and see how it stacks with American’s offer.

‘We will not rush to a decision and will work as a unified body to find the best course of action for the entire pilot group,’ the United union said in a statement. 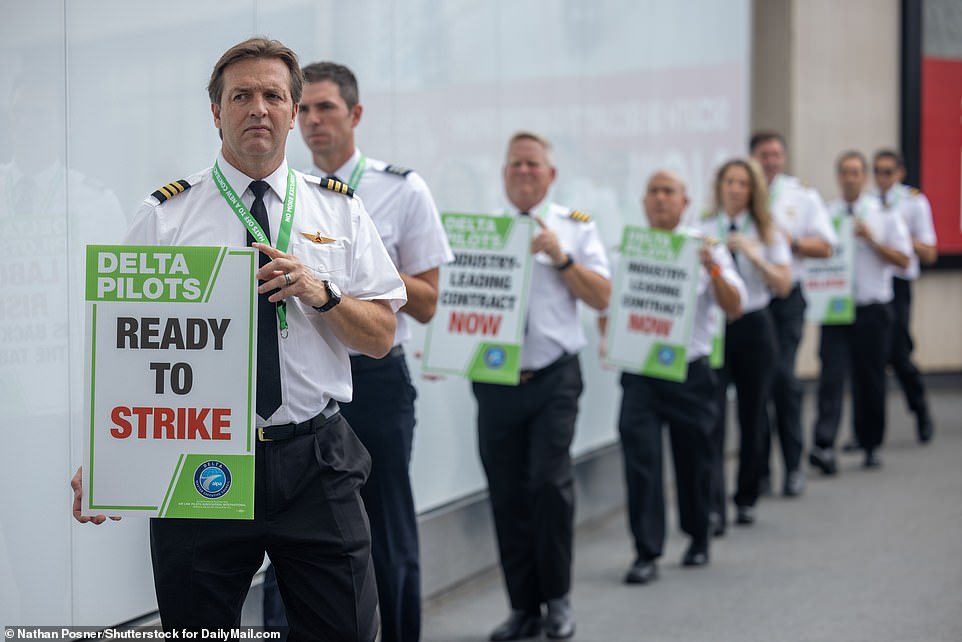 Travel through Delta is likely to be further complicated after its pilots started picketing on Thursday at several major airports including LAX, JFK and Atlanta 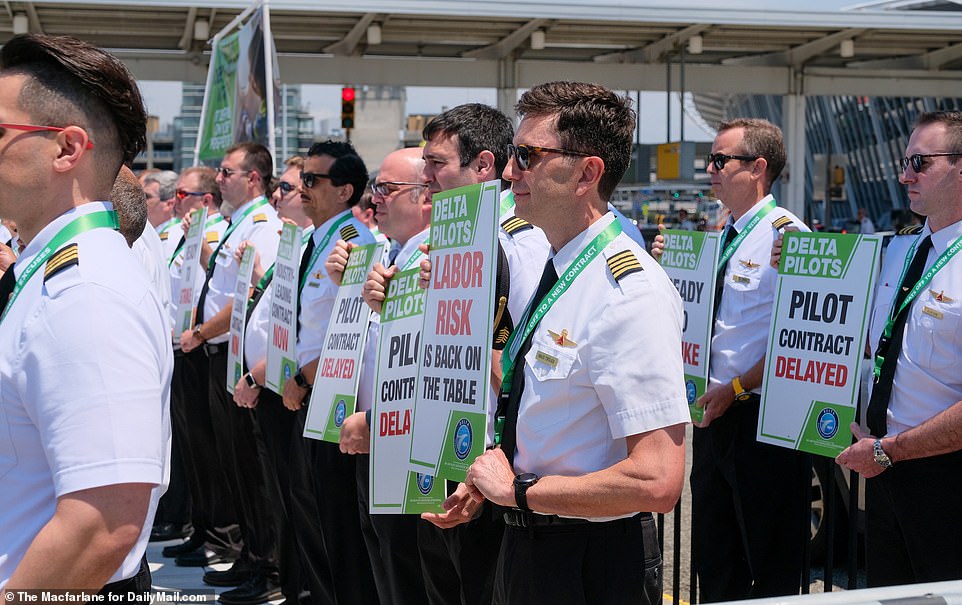 The unions’ battles come after a recent Air Travel Consumer report from the U.S. Department of Transportation found that there were 3,173 complaints against airlines in April 2022, a dramatic uptick from the 1,136 in April 2021.

The report also ranked the major airlines operating in the U.S. based on the percentage of on-time arrivals.

Ranked at the top was Delta Airlines, which had a nearly 82 percent on-time arrivals record in April. Following closely behind was United and Hawaiian Airlines at nearly 81 percent.

American and Alaska Airlines took the fourth and fifth spot, with Southwest Airlines ranking next with only a 70 percent on-time arrival rate.

Jet Blue trailed in last place, with the a 53 percent on-time arrival rate, according to the report. 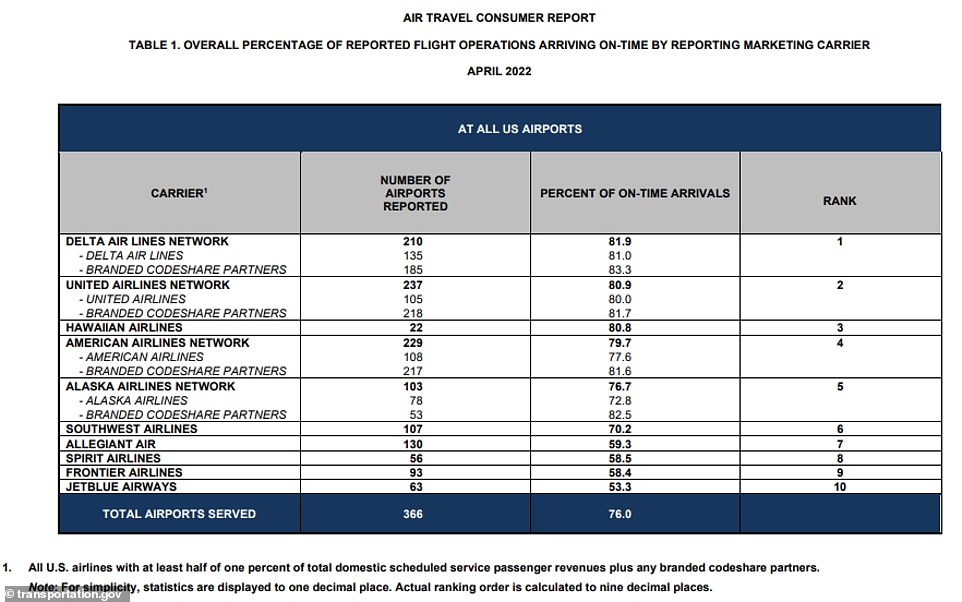 In addition, the Biden administration is blaming the airlines, saying it received billions in stimulus money to keep afloat during the pandemic and should stick to the schedule it publishes.

Transportation Secretary Pete Buttigieg said earlier this month that airlines had until July 4 to figure out the issues and work out the kinks so travelers can have a smooth summer holiday.

Buttigieg pushed back earlier this week when the head of the trade group Airlines for America blamed the FAA for delays.

‘The majority of cancellations and the majority of delays have nothing to do with air traffic control staffing,’ Buttigieg told ‘NBC Nightly News.’

‘The American people are sick of airlines ripping them off, canceling flights at the last minute and delaying flights for hours on end,’ he said.

Sens. Edward Markey, D-Mass., and Richard Blumenthal, D-Conn., asked 10 airline CEOs this week to ‘take immediate action’ to reduce travel disruptions. The senators demanded information about how each airline decides which flights to cancel and the number of consumer refunds requested and granted. 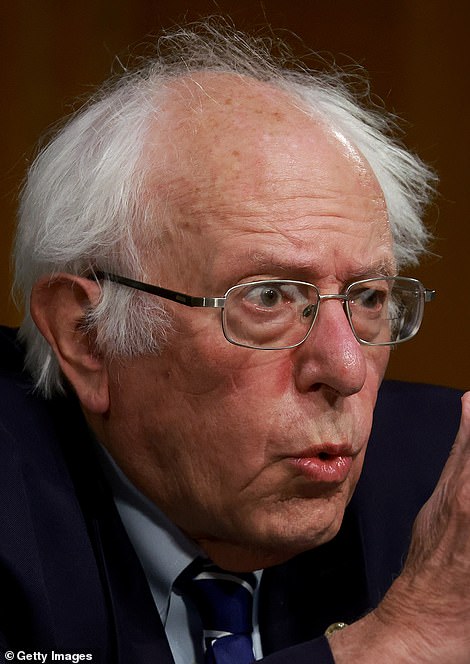 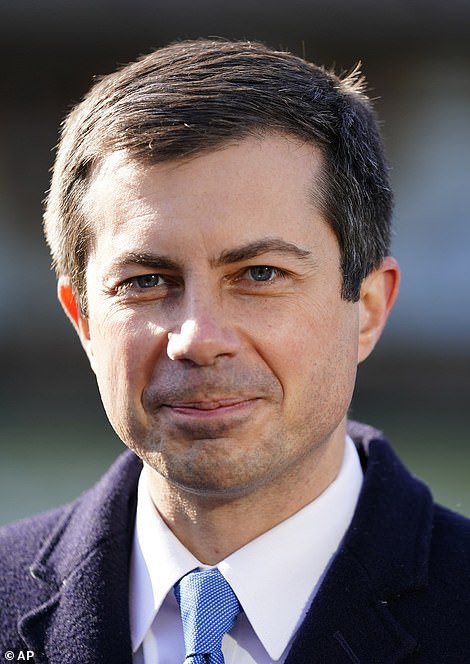 Sen. Bernie Sanders (left) demanded Washington fine airlines $55,000 per passenger for every flight cancelation they know can’t be fully staffed while Transportation Secretary Pete Buttigieg (right) said airlines have until July 4 to figure out the issues and work out the kinks so travelers can have a smooth summer holiday. 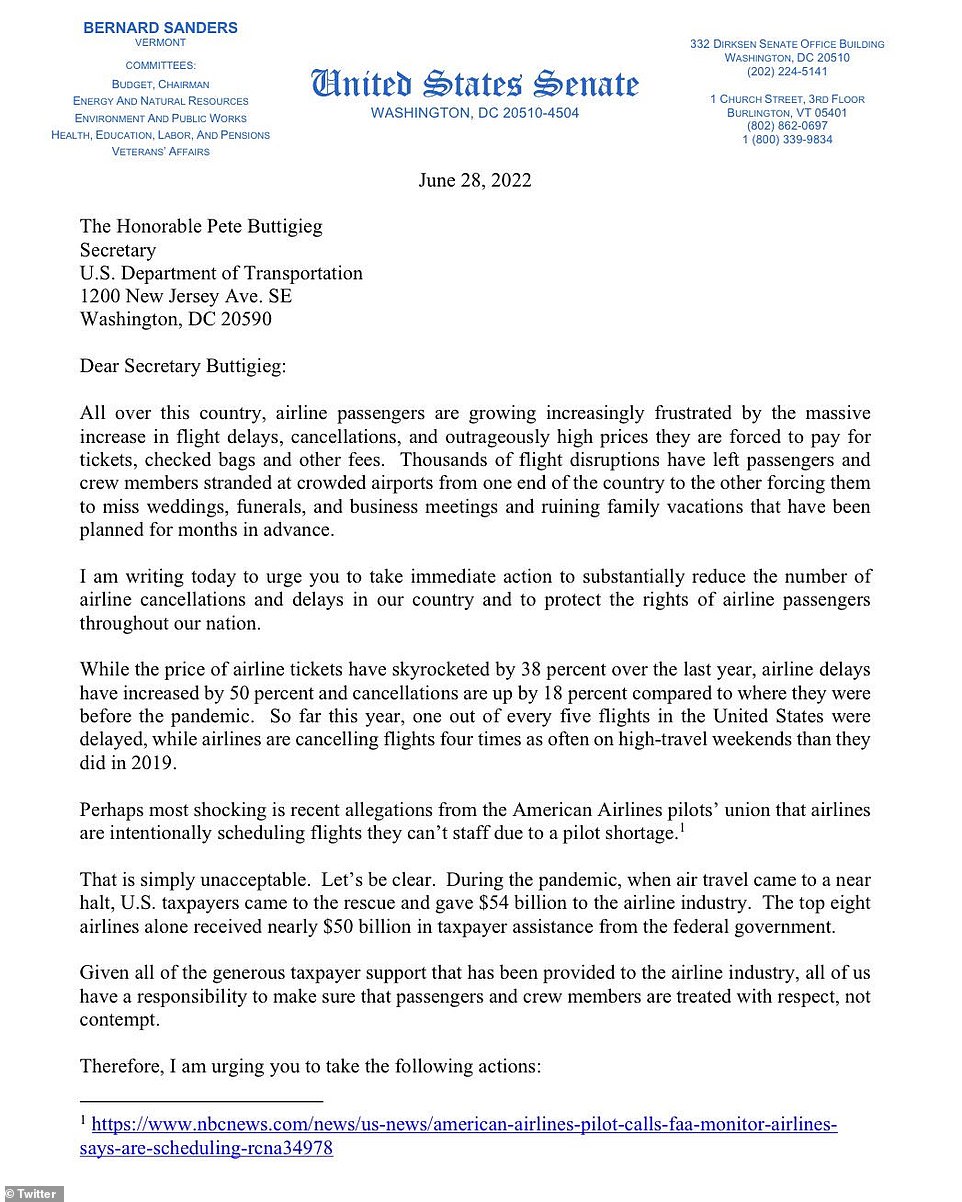 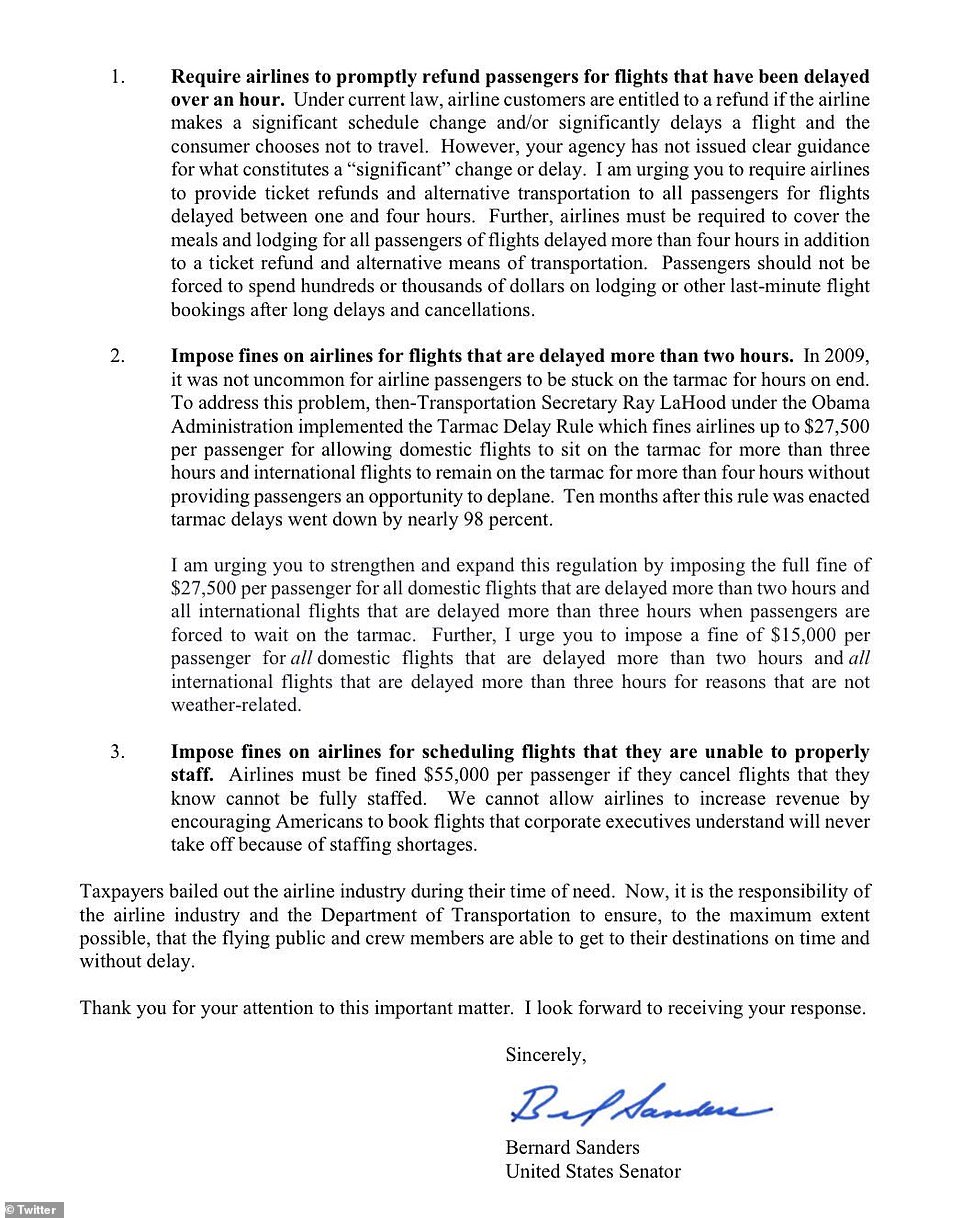 A record 42 million people around the United States are expected to hit the road for trips over the Fourth of July holiday weekend despite average gas price surging close to $5 per gallon.

The average U.S. retail price of gasoline recently broke through $5 per gallon for the first time in history. It has gone down slightly and averaged $4.86 on Wednesday.

While the $5 price is not record from an inflation-adjusted basis, it still represents an increase of nearly $2 per gallon from a year earlier.

Despite the higher cost, gasoline demand is only 1 percent below the average for this time of year in the United States, and a record number of people are expected to travel by car for the holiday weekend. The 42 million figure, should it pan out, would surpass 2019’s peak, when 41.5 million people traveled by vehicle on Independence Day, according to the American Automobile Association.

Including air travel, 47.9 million people are expected to travel 50 miles or more from home during the holiday period, just 2 percent less than 2019’s 49 million, but surpassing 2021’s levels, the travel membership organization said. 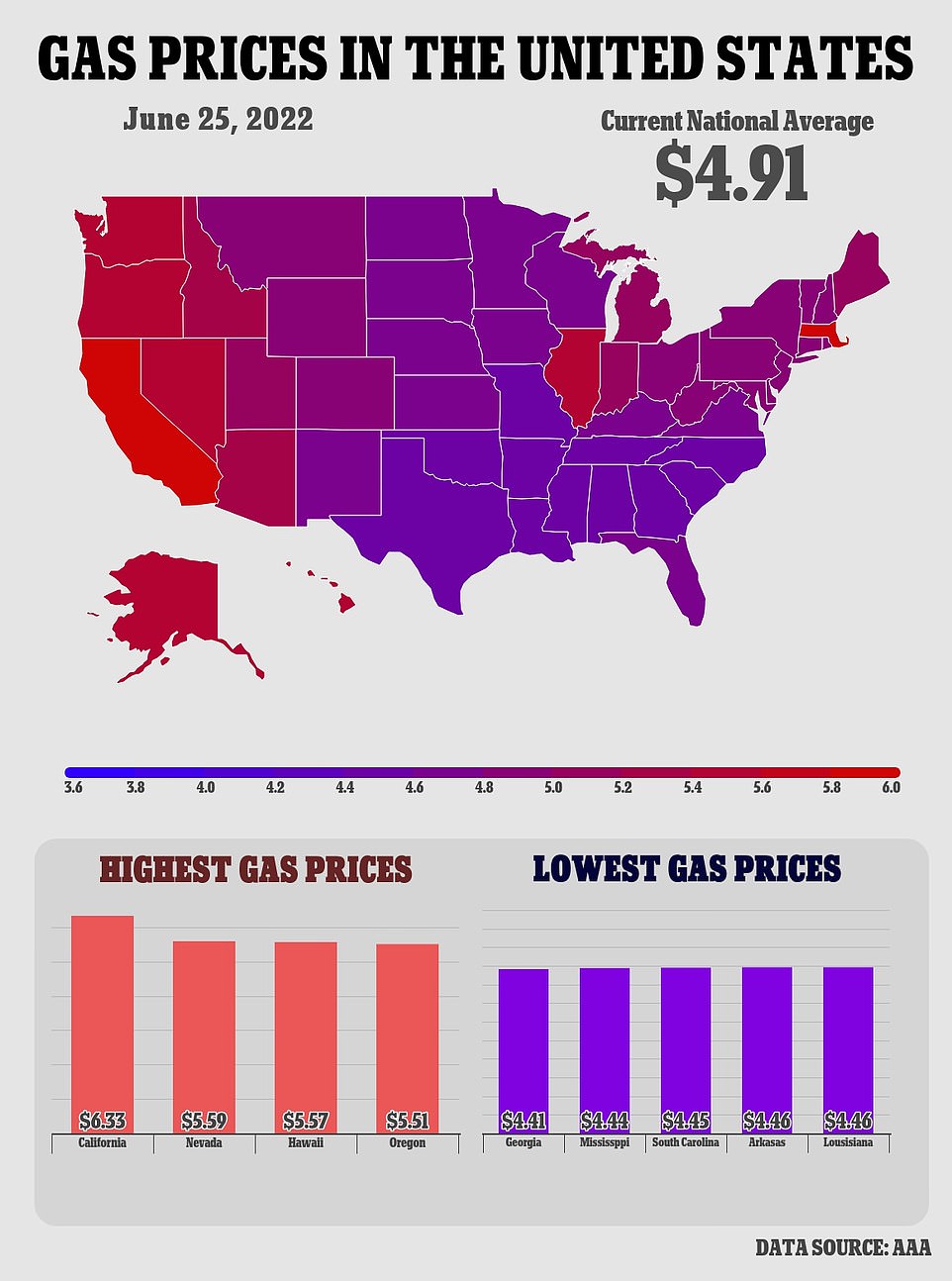 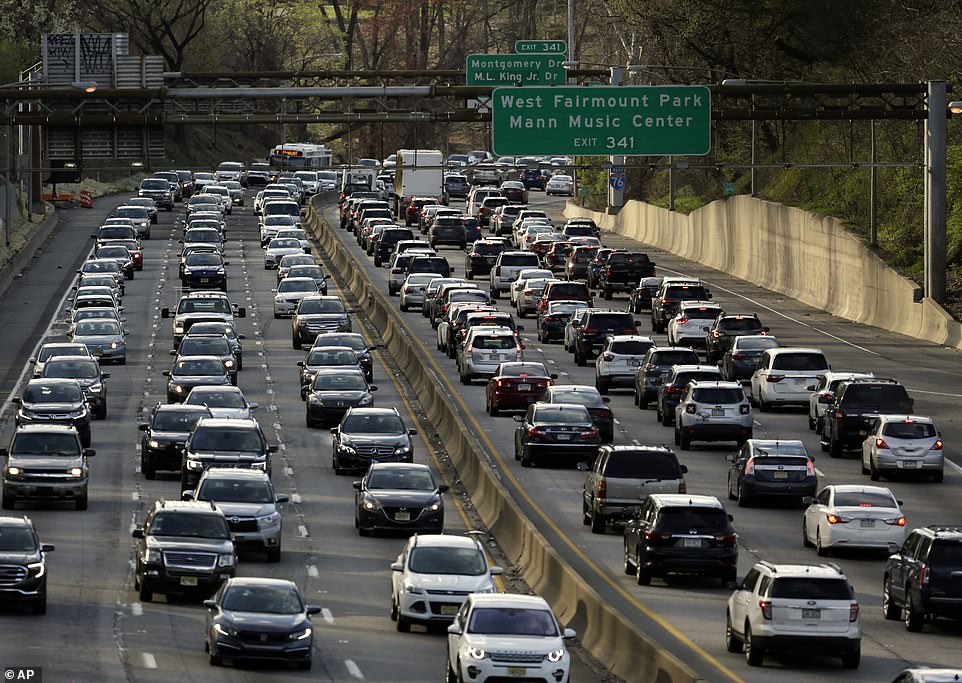 Researchers argued in a 2021 report that congestion has been building in the US month-by-month since the pandemic (Pictured: Philadelphia rush hour traffic in April 2019) 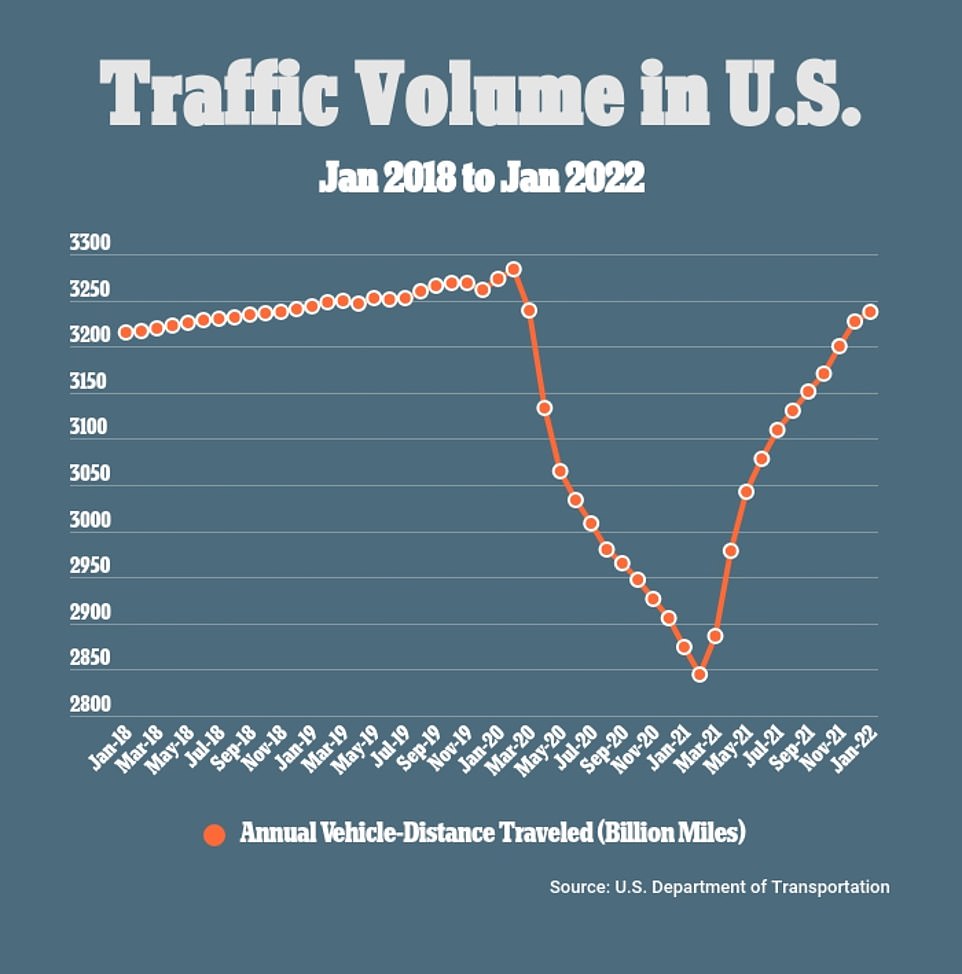 ‘The volume of travelers we expect to see over Independence Day is a definite sign that summer travel is kicking into high gear,’ said Paula Twidale, senior vice president of AAA Travel. ‘Earlier this year, we started seeing the demand for travel increase and it´s not tapering off.’

Through April 2022, 1.017 trillion vehicle miles were reported, a rate that trails only 2019 and 2018 in terms of pace, according to the U.S. Department of Transportation.

Flight cancelation Q&A: Why are airlines slashing so many flights and what is being done to fix it?

Why are there so many delays and attempts by the airlines to cancel and delay flights?

The airlines are increasingly trying to blame delays on understaffing at the Federal Aviation Administration, which manages the nation’s airspace and hires air-traffic controllers.

The FAA has admitted it’s understaffed, especially in an important air control center in Florida, which has meant a decrease in the quality of service and an increase in delays and cancelations.

Problems were popping up well before the weekend, with some disruptions caused by thunderstorms that slowed air traffic.

Helane Becker, an airline analyst for Cowen, an investment firm, said there are many reasons for the disruptions, including weather, FAA ground stops that last too long and flight crews hitting their legal limit of working hours in a day.

Why are airlines cutting flights?

Many of them, including Delta, Southwest and JetBlue, have trimmed summer schedules to reduce stress on their operations. They are using larger planes, on average, to carry more passengers with the same number of pilots. Those steps haven’t been enough so far this summer.

Are the pilots striking?

The pilots are not striking. Federal law creates a long and difficult process before airline workers can legally go on strike. The pilots are still walking picket lines while remaining on the job at various airports.

The pilots plan to picket, not strike, on the days they’re not scheduled to work in order to bring attention to the issues.

Why are pilots attempting to picket?

Pilots have complained that thinly staffed airlines are asking them to work too many flights, with more pilots reporting fatigue.

The Air Line Pilots Association claimed earlier this week its nearly 14,000 members are working longer hours even as airlines cancel thousands of trips.

What have officials proposed to potentially fix this or punish the airlines?

The Biden administration is blaming the airlines, saying it received billions in stimulus money to keep them afloat during the pandemic and should stick to the schedule it publishes.

Transportation Secretary Pete Buttigieg said earlier this month that airlines had until July 4 to figure out the issues and work out the kinks so travelers can have a smooth summer holiday.

Sen. Bernie Sanders wrote a letter to Buttigieg demanding he fine airlines $55,000 per passenger for every flight cancellation they know can’t be fully staffed.

Congressional leaders are demanding the airlines provide answers as to why there continues to be disruptions, especially since the industry received $50 billion in relief during the pandemic in an effort to keep business afloat.

Abdallahs open up about Oatlands crash that killed their three kids in powerful Vatican...