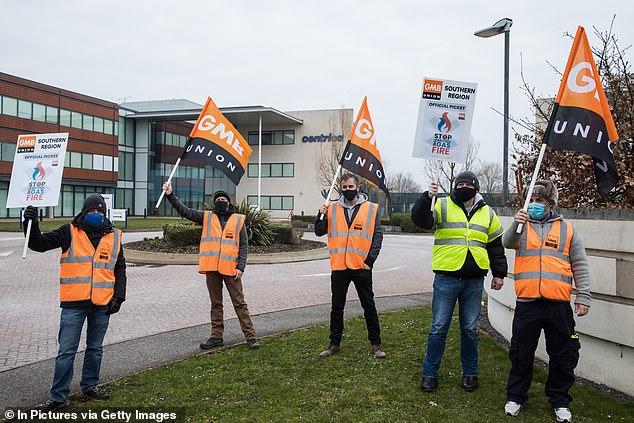 Fast food workers and brewery staff have voted to go on strike in a row over pay.

Similarly, the workers brew and distribute Greene King’s products – including IPA, Old Speckled Hen and Abbot Ale – will walk out for five days from December 5.

GMB said the majority of its members employed by Bestfood were in favour of industrial action. The union will announce the strike dates soon.

Nadine Houghton, a national officer for the union, argued staff are being crippled by the cost-of-living crisis and ‘struggling to make ends meet’ while the Bestfood continues to profit.

Unite, the union the represents Greene King’s brewers, echoed GMB’s sentiment, saying the brewery owners are ‘incredibly wealthy’ and that their ‘failure to offer workers a decent pay’ steams from ‘greed.’

The delivery drivers and brewers are joining thousands of rail workers, civil servants, postmen and nurses in planned walkouts this winter.

Hundreds of workers who deliver food to KFC, Burger King, Pizza Hut and Wagamama have voted to strike in a dispute over pay. The GMB union said the majority of its members employed by Bestfood voted in favour of industrial action

Greene King staff voted for strike action after the brewer offered them a 3 per cent pay rise and a one-off payment of £650, which it described as a substantial real-terms wage cut because of inflation.

Unite announced today that 188 of its members based in Bury St Edmunds, Eastwood, Nottinghamshire, and Abingdon, Oxfordshire, will walk out next week.

“Unite, which is now entirely focused on defending the jobs, pay and conditions of its members, will not idly stand by while a wealthy company tries to further boost its profits by subjecting its workers to substantial real-terms pay cuts,’ Unite general secretary Sharon Graham said.

“Greene King’s owners are incredibly wealthy; the failure to offer workers a decent pay rise is all about greed and not about need.’

‘Shareholders are trousering large dividends, while the people who do the graft are struggling to make ends meet.

‘All these workers want is a pay deal that protects them from this crushing cost-of-living crisis.

‘Now some of the best-known restaurants on the UK’s high streets will face shortages over Christmas.’

Britain is facing the prospect of a winter of chaos with industrial action set to cripple railways, impede holiday deliveries and force students and school pupils to miss out on their education.

Royal Mail workers will partake in industrial action arranged by the Communication Workers’ Union amid a long-running feud with the company over pay, working conditions and redundancies.

The postal service said they lodged an enhanced pay offer with ‘extensive improvements’ following a period of negotiations with the Communication Workers’ Union, which was swiftly rejected by striking staff.

Simon Thompson, the chief executive of Royal Mail, has been embroiled in a public war of words with union barons as striking staff promise to ‘fight as long as it takes’.

Members of the Rail, Maritime and Transport Union (RMT) have confirmed they will walkout between December 13 and 14 and then later in the month on December 16 and 17.

Britain’s transport network is set to be crippled in the run up to Christmas as a result, with RMT members at Network Rail and 14 train companies overwhelmingly voting in favour of the measures last week.

Civil servants within the Home Office, DEFRA, Border Force and Department for Transport are also set to walkout from mid-December after a long-running row over pay, jobs and pensions.

The University and Colleges Union, which represents 58 higher education providers across the UK, will hold a three-day strike between December 1 and December 3 as part of their dispute over pay, pensions and contracts.

The GMB union’s strike is set to take place from 3am on Monday, December 5.

The Royal College of Nursing yesterday confirmed they proceed with industrial action over pay next month, but the dates are yet to be confirmed.

Home and Away, The Matrix star Matt Doran reveals his surprising day job