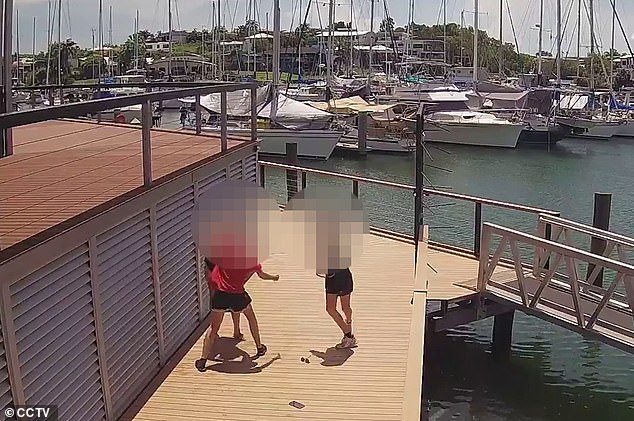 Horrific video shows mean girl teens as they launch savage HALF-HOUR attack on friend’s MUM – smashing her head with a PHONE, breaking her finger and ripping her hair out

The two assailants ripped out chunks of the victims hair, broke her finger, gave her a black eye and smashed her head and face using a mobile phone and a drinks can.

In one part of the prolonged assault, the teens can be swinging a backpack down on the head of their victim Karen Orchard during her horrific ordeal.

Medics say the Ms Orchard will need surgery on the broken finger which had to have her wedding and engagement ring cut off before it could be treated.

The pair are said to have trespassed onto Darwin’s Bayview Marina in the Northern Territory and confronted a young girl there who they knew from school.

The clash escalated into a fight in the boatyard before the third girl’s mother attempted to intervene and was then assaulted herself.

She was then subjected to the relentless 30 minute attack, even despite the intervention of a passing man who appeared unable to get past a security gate.

The grim CCTV footage from the scene shows the woman being continuously jostled and repeatedly hit by the two young girls.

The victim has now fled the NT and moved to Queensland in the wake of the attack.

Ms Orchard’s husband Sam Henger told NT News: ‘When I asked a police officer how they were going to protect my family from another attack, he responded there was nothing police can do.

‘What they could have done was interview the children with the parents present and laid charges for a brutal assault on my wife. 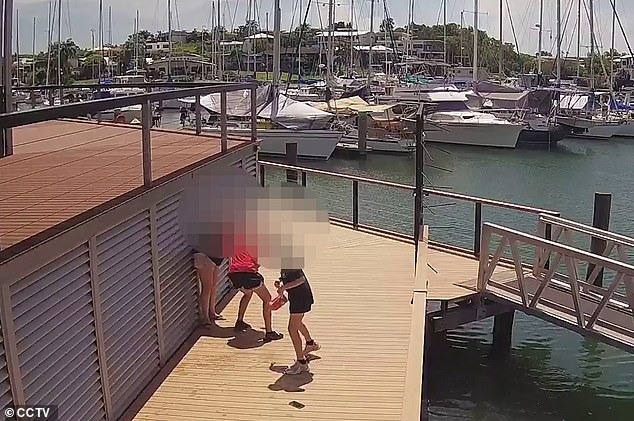 ‘They wanted to get to my oldest daughter and when she stopped them entering the boat they threatened to attack our youngest daughter, who is nine.’

He added: ‘The school was made aware of bullying and didn’t act and then they came to my daughter’s place to attack her.

‘[My wife] has had her hair ripped out, her wedding rings removed, her finger broken and now faces surgery. It’s psychologically devastating for her.’

Police said they apprehended two girls at the boatyard and inquiries into the incident are still continuing.

‘The youths were left in the care of responsible adults and are assisting police with enquiries,’ said Territory Duty Superintendent Drew Slape.

Jared and Ivanka take a family stroll to check the progress of their $24...

Chicago woman says stranger moved into her home, with cops unable to remove the...

Travis Barker was ‘hospitalized for pancreatitis’ after undergoing colonoscopy

Ron Perlman, 72, dances with his bride Allison Dunbar, 49, at their Italian wedding