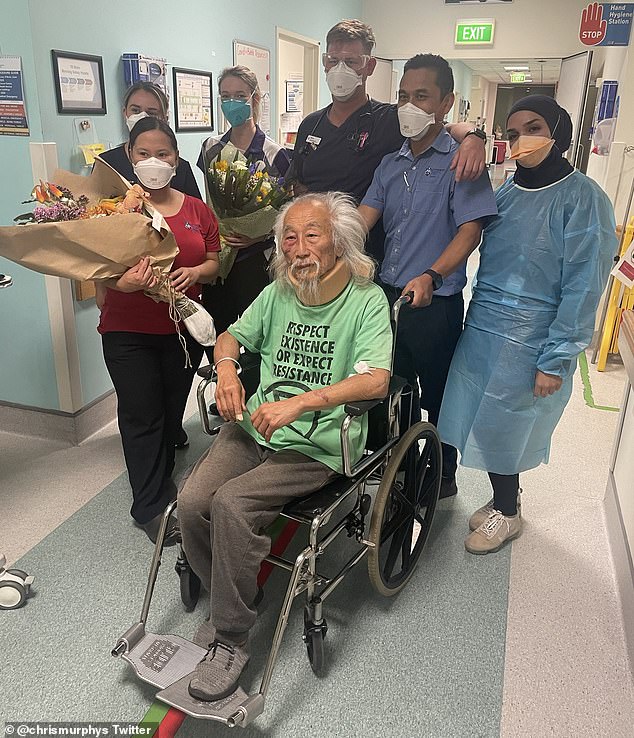 Beloved Sydney activist Danny Lim has been released from hospital following a violent arrest that left him with a severe brain injury – wearing a T-shirt bearing a defiant message.

Mr Lim, 78, was forced to the ground and arrested in Sydney CBD’s Queen Victoria Building shortly before 11am on Tuesday.

Police ‘discontinued’ the arrest after Mr Lim’s head cracked against the tiled floor, instantly causing his cheek to bleed.

He was rushed to St Vincent’s Hospital with a blackeye and diagnosed with a ‘subdural haematoma’ – a bruise between the surface of the brain and the skull. 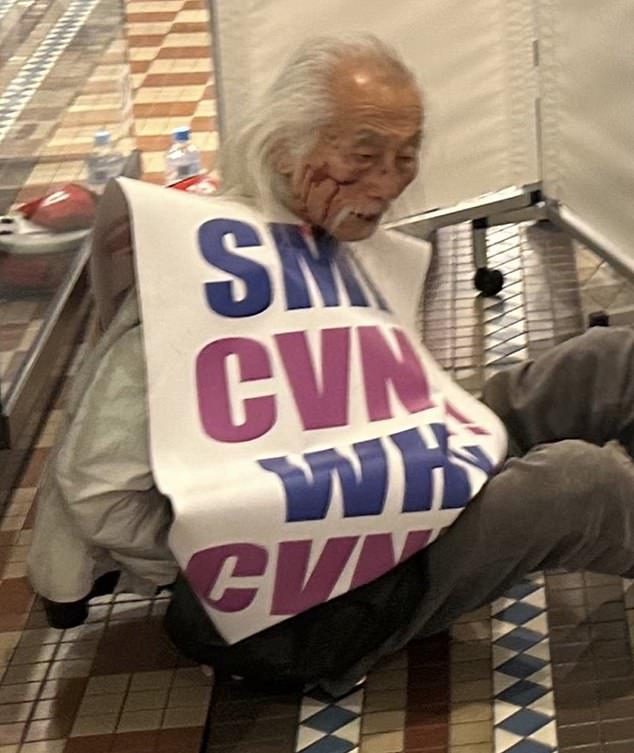 Brain injuries like Mr Lim’s often have lifelong implications so the 78-year-old will have to undergo regular checkups to monitor the bruise.

Mr Lim was headed toward the train station on Tuesday but stopped to talk to a friend when police asked him to leave – witnesses said no one asked Mr Lim to move on before police arrived.

The two officers moved to arrest Mr Lim after he refused to move on but knocked the elderly man to the floor in the struggle.

A distressed witness filmed the arrest, which an expert claims shows one of the officers intentionally toppled the 78-year-old man using an intentional leg maneuver.

High-profile defence lawyer Chris Murphy is supporting Mr Lim and said he was in a ‘very poor state’ and ‘unable to communicate clearly’ on Wednesday.

‘He’s so small, he only weighs about 50kgs,’ he told Daily Mail Australia. 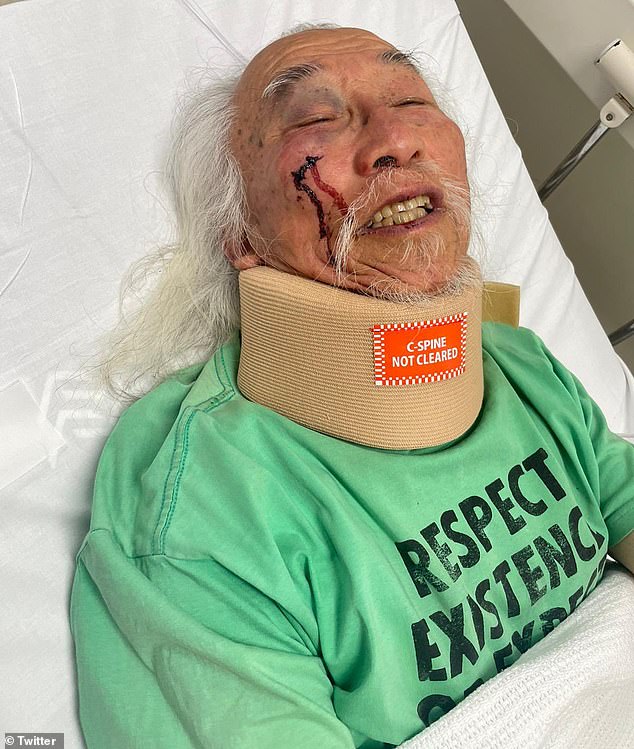 Mr Lim (pictured on Wednesday) suffered a black eye, bloody cheek and a ‘subdural haematoma’ – a bruise between the surface of the brain and the skull – during his arrest 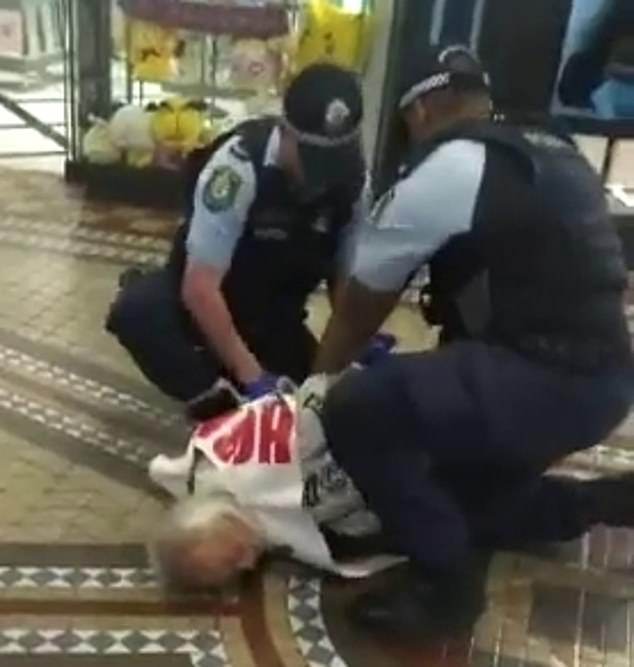 ‘Police have put out this story of a nasty man. Whenever I’ve encountered him, I’ve felt happy.

‘(Witnesses) all say the way police were harassing him was unnecessary. He was on his way home, he was harmless.’

Mr Lim and his 17-year-old pup Smarty have been a beacon of light in Sydney’s CBD for several years, often greeted with high-fives and selfies wherever they go.

The furious response has triggered an internal investigation by NSW Police but protesters say the case warrants an independent inquiry. 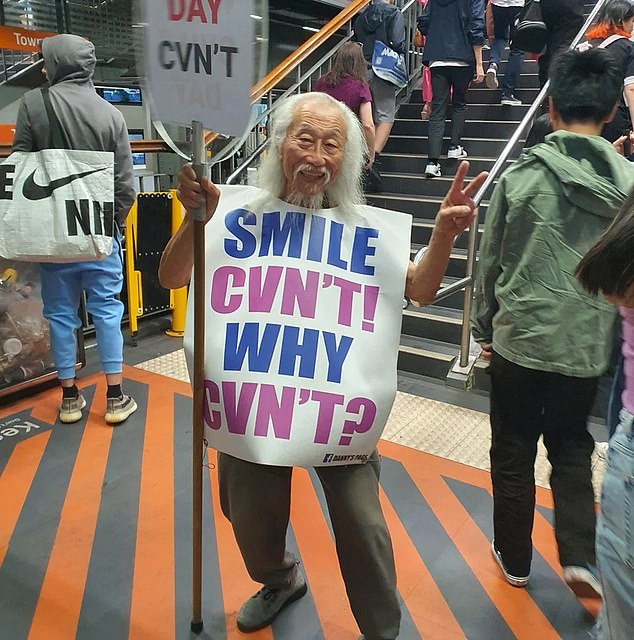 Mr Lim (pictured at Town Hall train station on Saturday) is famous around Sydney for his sandwich-style boards spreading messages of love, happiness and peace 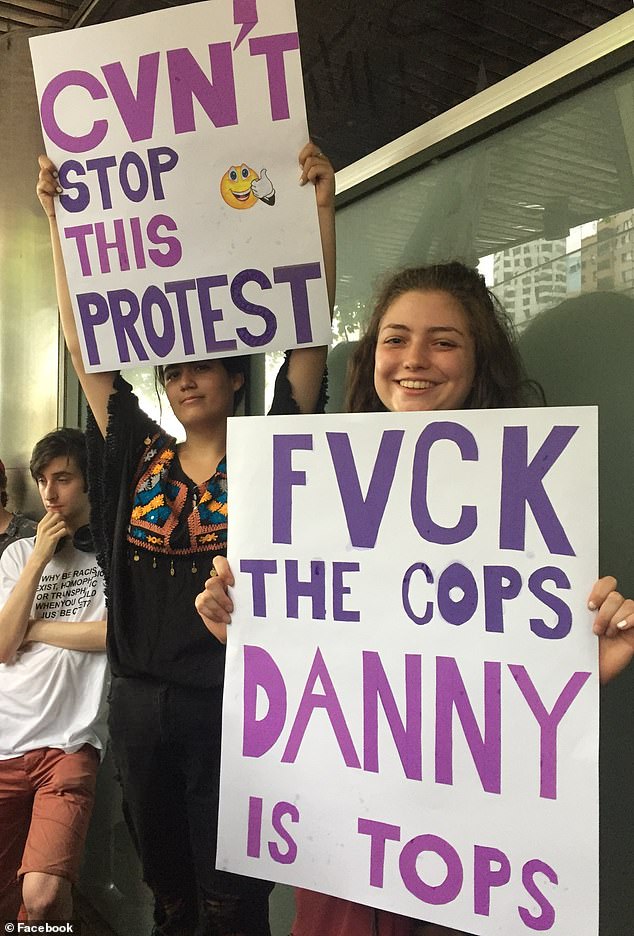 A NSW Police spokesperson said on Wednesday: ‘The matter has been triaged as a complaint and allocated to an investigator from another command within Central Metropolitan Region.

‘In accordance with the NSW Police Force corporate policy on complaint handling and management, the internal investigation will have oversight from the Law Enforcement Conduct Commission.’

He said Mr Lim was walking along the corridor connecting the QVB to Town Hall train station when police approached him. 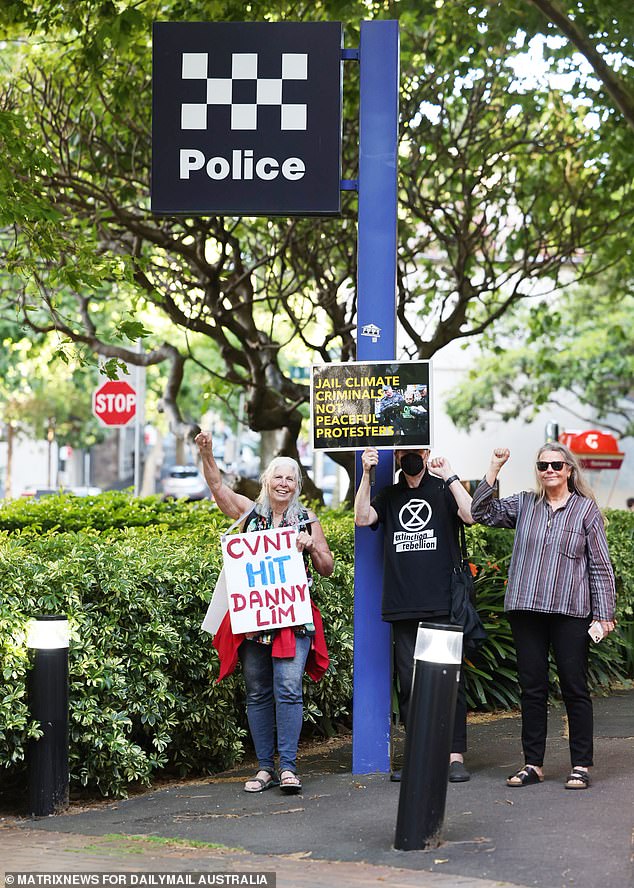 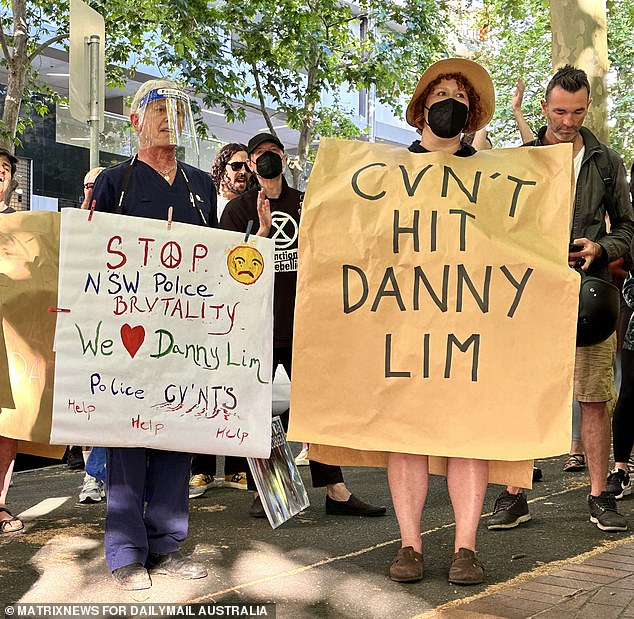 ‘You can see his Opal (transport) card next to him. He was walking to Town Hall station, on his way home, but paused at a telephone shop because he knew the owner,’ Mr Murphy told Daily Mail Australia.

‘He’s a chatter, he wanted to have a chat!

‘The owner was serving a customer so Mr Lim was waiting outside when police arrived.’

Mr Murphy said several shop owners witnessed the incident and told lawyers Mr Lim was never asked to leave by anyone around the phone shop.

‘One woman was very distressed and filmed it,’ he said.

The footage was later reviewed by an expert whose analysis was revealed to Daily Mail Australia. 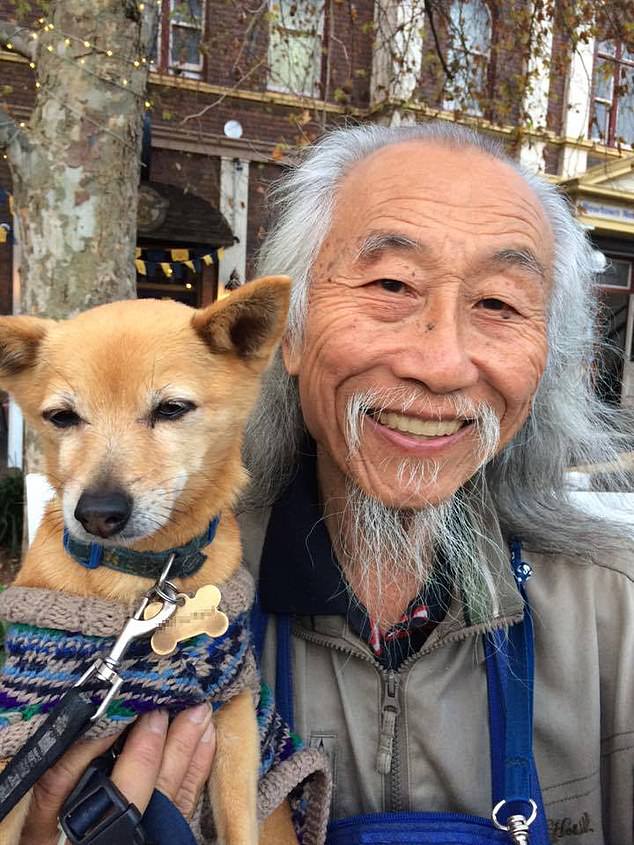 Mr Lim and his 17-year-old pup Smarty (pictured together) have been a beacon of light in Sydney’s CBD for several years, often greeted with high-fives and selfies wherever they go 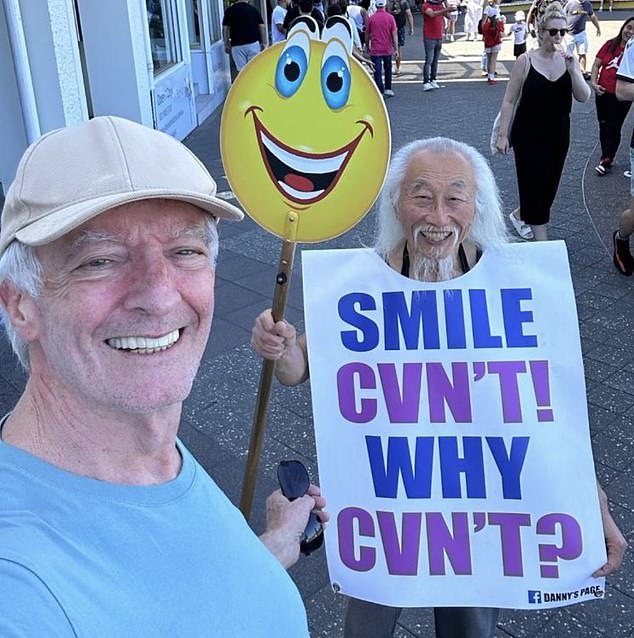 It claims the officer on Mr Lim’s left stuck their foot in front of the 78-year-old as he charged forward, causing Mr Lim to trip and fall head-first into the hard floor.

‘They both had his arms so he couldn’t break his fall. They did not attempt to save his fall either.’

The move is reportedly part of standard police procedure.

‘An independent review will examine the actions of police during the arrest of a 78-year-old man in Sydney’s CBD earlier today,’ the statement said. 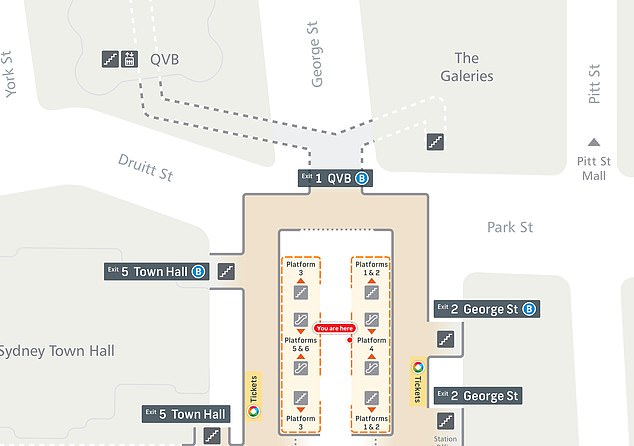 Mr Lim’s ‘discontinued’ arrest was staged in the corridor connecting the QVB to the Town Hall train station (pictured, a map of Town Hall station showing the corridor top left) 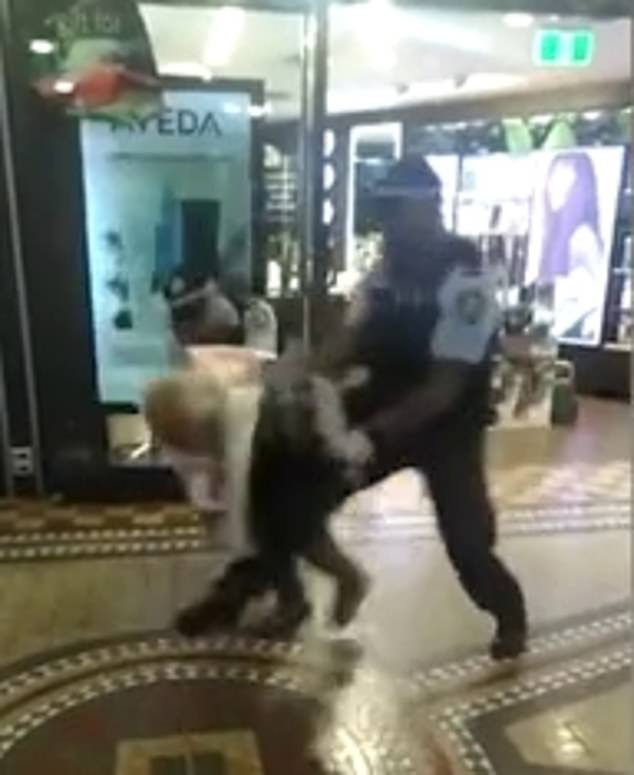 ‘Shortly before 11am, officers from Sydney City Police Area Command were called by security to a shopping complex on George Street after a male had failed to leave the building when asked.

‘Police will allege the man was subsequently issued with a move on direction by officers and failed to comply.

‘As inquiries into the incident continue, an independent review has been launched, which will examine the actions of police during the incident.’

Mr Lim’s supporters have called for the officers involved in the incident to be suspended while an independent investigation is complete.

Mr Murphy shared a damning tweet on Wednesday saying: ‘If NSW Police think they are going to inquire into themselves and bury the file over the violent attack on totally innocent Danny Lim, witnessed by alarmed citizens, they can think again.’

‘Danny, 79 in January, has my full commitment to court proceedings no cost to him.’

WHO IS DANNY LIM?

Mr Lim says he was orphaned at just five months old and was raised by his Chinese grandmother in a small village about 90km away from Malaysia’s capital, Kuala Lumpur.

As part of of Chinese ethnic minority, Mr Lim grew up surrounded by racism and institutionalised discrimination.

He moved to Sydney’s Summer Hill in 1963 on a student visa but found he was again surrounded by racist attitudes.

Mr Lim studied and worked as an electrical technician before retiring at 59 to pursue a career of politics.

In 2003 he was elected onto Strathfield’s council and just one year later, in 2004, held his first ever sandwich board protest during a corruption scandal.

It read: ‘Strathfield Council, have some morals! Stand down!’

He worked as a councillor for eight years, resigning in 2011 after a series of controversies led to voters making death threat against him and his pup Smarty, then six years old.

During his time in office he made more than 100 motions, became the first councillor in more than 120 years to win a no confidence vote against the mayor and faced down 18 breach of conduct claims.

In 2016 he attempted to reignite his political career by running for federal senate.

By this time Mr Lim was a familiar face around Sydney and known for his signs advocating love, peace and smiling.

His campaign focused ‘welfare, not warfare’ and claimed everyone should have a ‘fair go, fair dinkum’.

Mr Lim has had several run-ins with Sydney police.

In January 2019 he was arrested for wearing a sign reading ‘SMILE CVN’T! WHY CVN’T’ but was cleared of charges after a judge found his sign was cheeky, but not illegal. 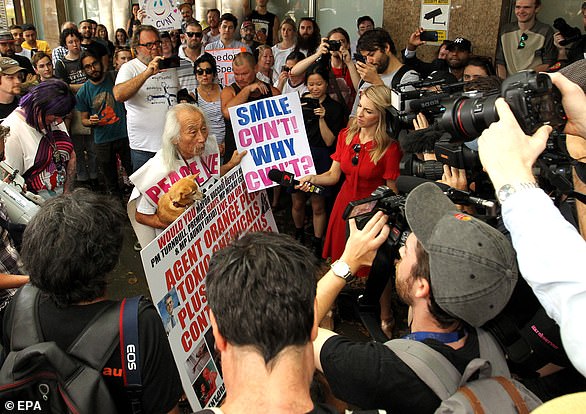 Labour is facing civil war over rail strikes as key MPs insist they will...