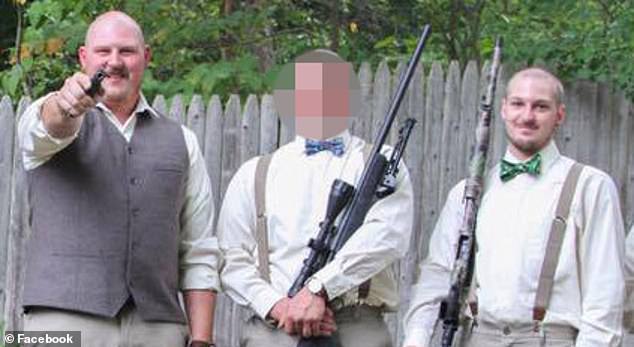 The man who murdered two cops after luring them to his home with a fake 911 call allegedly interacted with officers at a local bar earlier that night.

Nicholas Brutcher and local cops crossed paths at Bleachers Bar in Bristol, Connecticut, though it is unclear what the interaction consisted of, according to CT Insider.

Earlier reports suggested Brutcher had been kicked out of a bar before he carried out his rampage, though it is unclear whether that was Bleachers Bar.

The news comes as police released the body-cam footage of Alec Iurato, 26, one of the three officers who responded Brutcher’s home in Bristol last Wednesday.

Once the cops arrived, Brutcher suddenly opened fire on them, unloading more than 80 rounds at the unsuspecting officers.

Dustin DeMonte, 35, and Alex Hamzy, 34, were both killed in the shootout.

Officer Iurato was shot in the leg but managed to run for cover, before eventually finding an opening and killing Brutcher with a single gunshot. It remains unclear what motivated Brutcher to carry out the attack.

Nicholas Brutcher allegedly interacted with local cops at Bleachers Bar in Bristol, Connecticut, earlier the same night he murdered two officers after luring them to his home with a fake 9-11 call 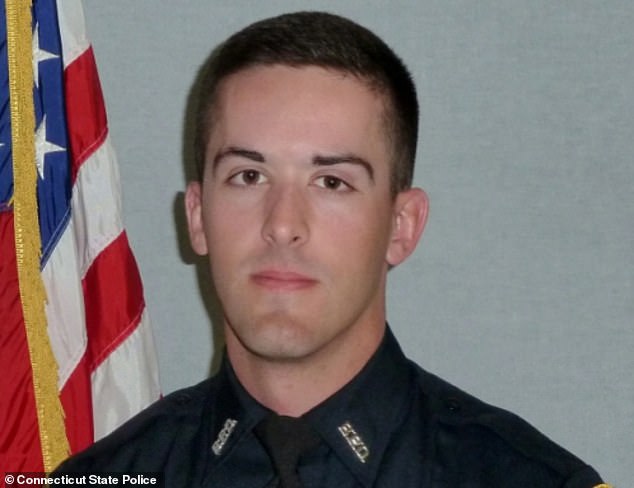 Alec Iurato, 26, was rushed to Saint Francis Hospital and underwent surgery for serious gunshot wounds, where he is currently recovering

Iurato’s body-camera footage showed the officer hiding behind a tree as he desperately called dispatch for back up.

‘Shots fired, shots fired, more cars, send everyone!’ Iurato yelled into his radio, as hysterical screaming could be heard in the background.

‘Officer shot, officer shot,’ he then reported, as he leaned on the tree and groaned with pain from his wounded leg.

After another gunshot rang out Iurato began to limp to his car for better cover, then a loud burst of nearly thirty gunshots erupted.

Iurato took cover behind a squad car, and peering over the hood he took aim and fired a single shot.

‘He’s down,’ somebody could be heard saying aloud as Iurato shone a light on the location where Brutcher fell, before he then called ‘One down,’ in over his radio as somebody can be heard wailing ‘No! Oh god!’ aloud. 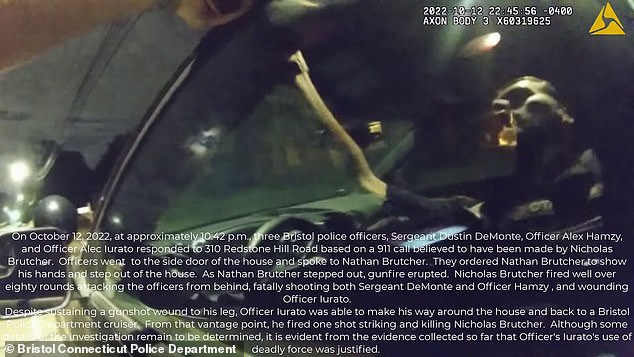 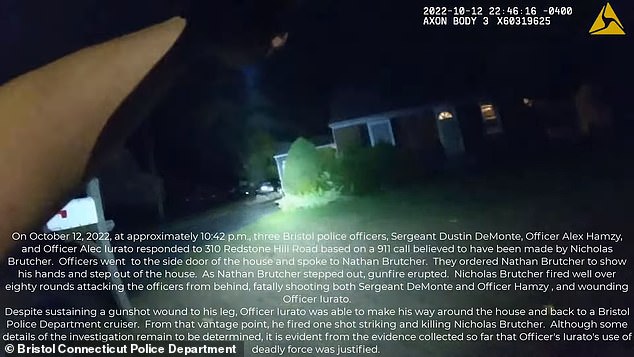 Iurato shines a light at the spot where he shot and killed Brutcher moments earlier,’ One down,’ he then called in over his radio 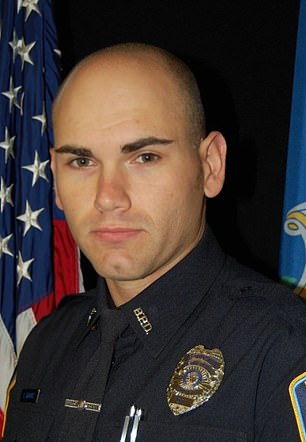 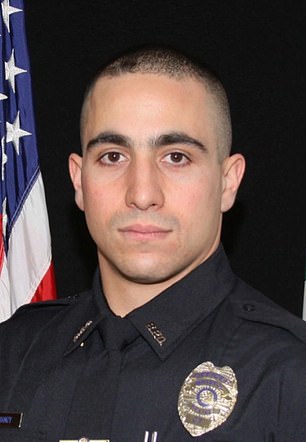 Dustin DeMonte (left), 35, and Alex Hamzy, 34, were shot dead while responding to a 911 call of a domestic incident between two brothers in Connecticut

Police said Brutcher’s 9-11 was ‘a deliberate act to lure law enforcement to the scene.’

One witness, Danny Rodriguez, said he heard three sets of gunshots and 30 shots in total. He says he heard another woman yelling out during the shooting: ‘you killed them!’

‘I heard a whole war going on behind me,’ Rodriguez said, according to KOCO.

According to the New York Times, Rodriguez saw a man dressed in camouflage leaving the Brutcher home with a rifle. Another man followed and attempted to restrain the camouflaged man before he was shot.

She added that it was an ‘isolated incident’ with ‘no threat to the community’ during a press conference.

Bristol Police Chief Brian Gould added that the deaths were as a result of ‘senseless violence’ which has brought the force ‘sadness and grief.’

‘They answered a call to duty, and they responded without hesitation, and that’s what they did every night before that,’ Gould said. ‘And that’s what all our officers do and will continue to do day after day.’ 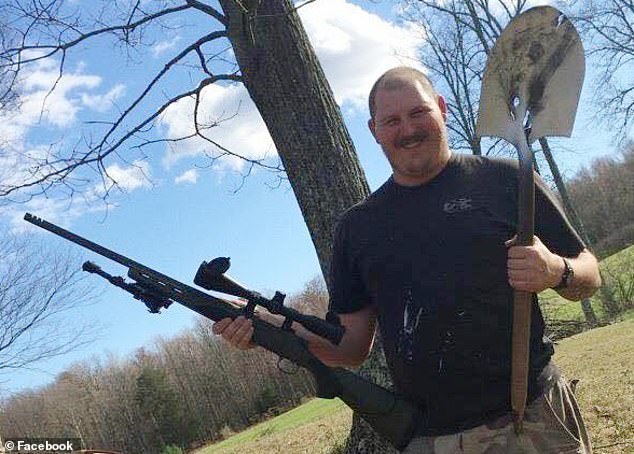 Nicholas Brutcher, 35, who was described as ‘rowdy’ and ‘always drinking,’ was shot dead at the scene 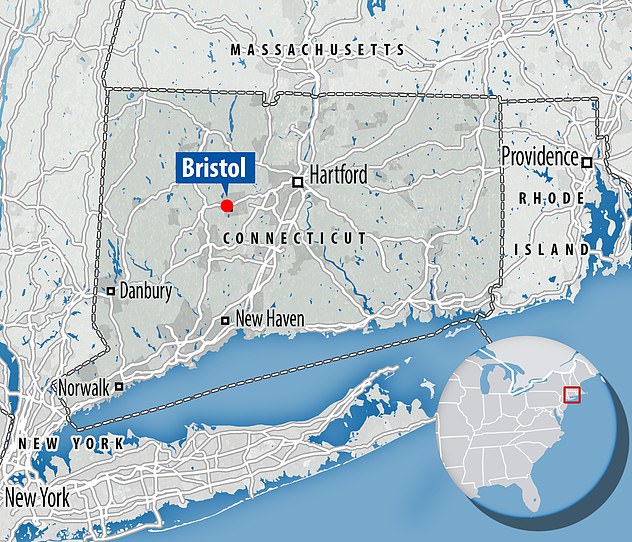 Neighbors said the divorced dad of two was ‘always drinking,’ and that he’d often be around checking on his brother Nathaniel. Nathaniel was shot but not killed in the Wednesday altercation.

Another neighbor described Nathaniel as a ‘skater punk’ and ‘man-child’ who was constantly under the influence and did little to get his life together.

‘Nate is high as a kite every time I see him. But cocaine doesn’t drive you to call cops and shoot them,’ he said.

The neighbors also spoke of the Brutcher’s family, which includes their mom and dad, two brothers and an adopted sister.

‘Their mother must be a wreck right now,’ a neighbor told the New York Post. ‘She’s also crazier than a f**king bag of chips.’

The neighbor added the Brutcher’s father has ‘got a really good heart. He’s been taking care of their mother and those boys for years. That dude’s a strong man.’ 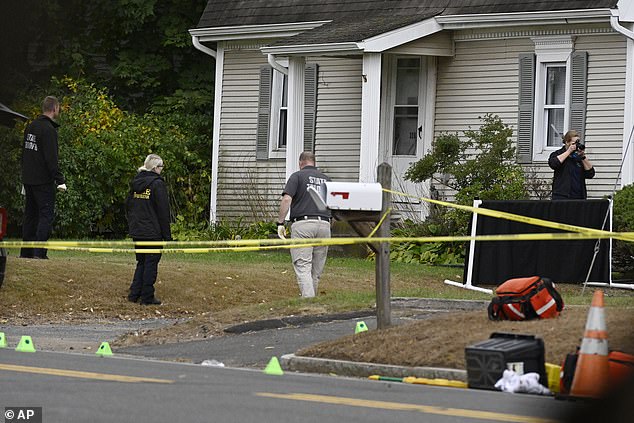 Sergeant DeMonte was hired in 2012 and worked as a school resource officer, and is survived by his wife Laura and two young children Phoebe and Porter. The couple was expecting a third child.

‘Words cannot express the sadness and grief that brings me before you this morning,’ Gould said.

DeMonte was named the 2019 Officer of the Year and also worked as an advisor for the explorer cadet program.

Officer Hamzy joined in 2014, working the patrol division and is survived by his wife Katie, parents and two sisters.

Iurato was hired in 2018, and was also assigned to the patrol division. 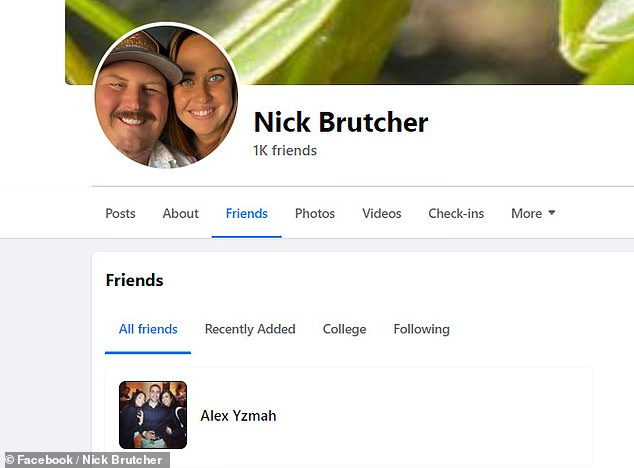 It was discovered Friday that Brutcher had been Facebook friends with Officer Alex Hamzy, whom he is accused of killing Wednesday night. Hamzy apparently spelled his last name backwards on the social networking site 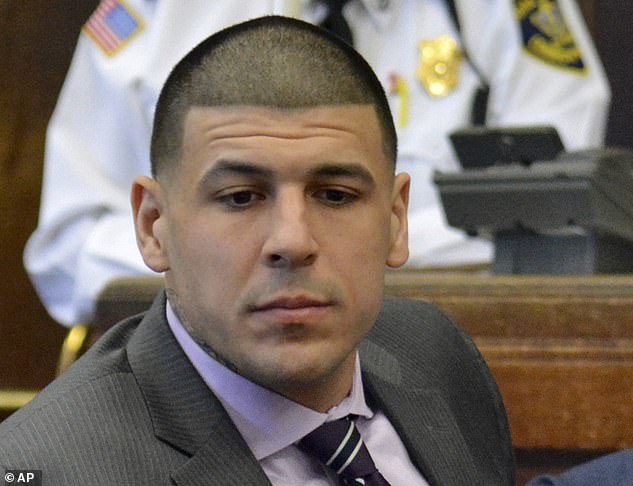 Nicholas Brutcher, who allegedly fired on the officers before being killed in the ensuing shootout, attended Bristol Central High School at the same time as the ex-New England Patriot

In a bizarre twist, it was discovered that Brutcher and Hamzy were Facebook friends with each other, who apparently went by Alex Yzmah on the social networking platform.

It is unclear whether the two actually knew each other.

Hernandez died by suicide in a Massachusetts prison cell in 2017, after his arrest and conviction for the murder of Odin Lloyd in 2013.

He had been acquitted in the double murders of Daniel de Abreu and Safiro Furtado and he was appealing his conviction for the murder of Lloyd when he killed himself at the Souza-Baranowski Correctional Center in Lancaster.

It was later determined that he’d had an advanced stage of CTE, which causes brain damage and is common among NFL players.

Brutcher and Hernandez both played on the school’s football team and had several mutual friends, according to the New York Post. It is unclear if they had any relationship beyond that, as Brutcher was a senior when Hernandez was a freshman. 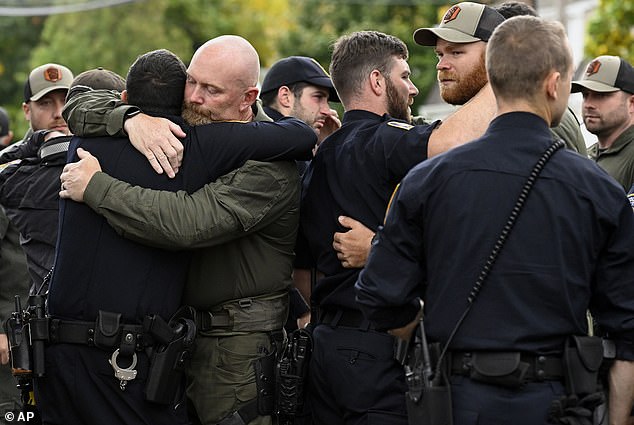 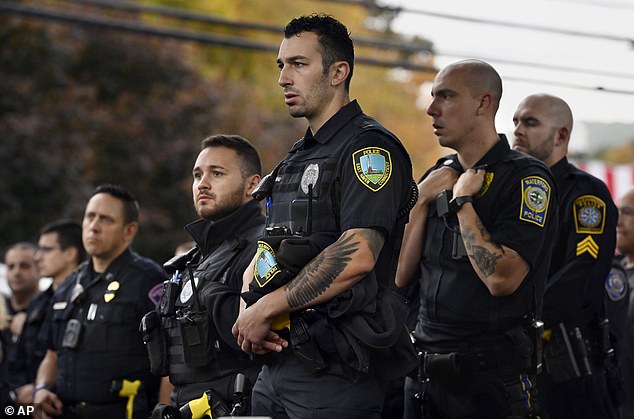 The day after the shooting, scores of Connecticut cops turned out to the site of the attack to pay their respects to the fallen police officers.

Photos showed uniformed officers lining the street, and many wiping away tears and embracing one another at the memorial gathering.

Connecticut Gov. Ned Lamont directed flags to be lowered to half-staff in honor of the fallen officers.

Mourners have left several floral tributes outside of the Bristol Connecticut Police Department, which also has black bunting hung over their sign.

Fury as American Nurses Association calls for all restrictions on child sex changes to...

Jewish cemetery in Chicago is vandalized with swastikas and graffitied with: ‘Kanye was rite’

Ashley James stuns as she shows off her baby bump in a flowing magenta...