What a daft 18-wheeler waste of money. Nick Grimshaw and Emma Willis rolled up for a home makeover in a juggernaut the length of a football pitch — then left it parked on the kerb.

Their ‘almighty truck of wonder’ was meant to be crammed with life-changing technology and enough soft furnishings to fill six removal vans, on The Great Home Transformation (C4).

When they arrived at a three-bedroom semi in Eastbourne, the lorry was big enough to pack the entire house inside. But its contents were barely used.

Nick boasted about his team of domestic spies using GCHQ-style motion capture cameras and heat-mapping sensors, yet we never met them. 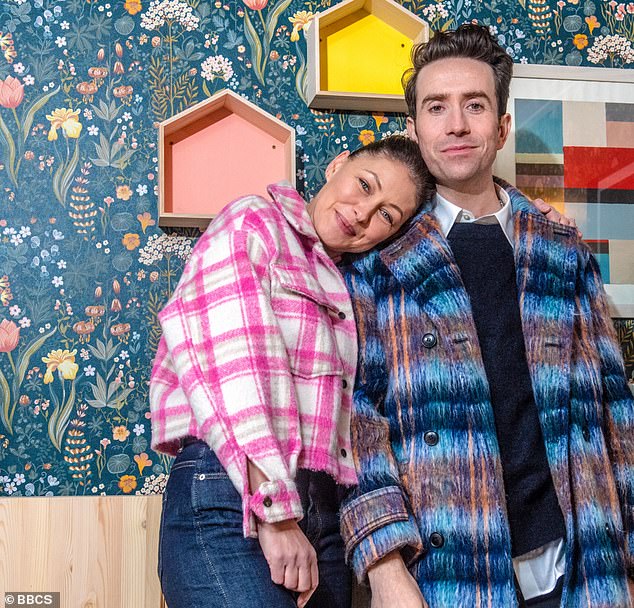 Nick Grimshaw and Emma Willis’s ‘truck of wonder’ was meant to be crammed with life-changing technology on The Great Home Transformation (C4). But its contents were barely used

I suspect the ‘team’ was just one little bloke in a brown warehouse coat, who spent most of his time having a ciggie round the back of the lorry.

The much-vaunted ‘heat maps’ turned out to be a couple of animations of a yellow stick figure leaving a blurred trail around a room.

Homeowner Sam, an estate agent and father-of-four, was invited into the pantechnicon for a quick look at some sofas. But then the lorry tailgate slammed shut and we never stepped inside again.

As the house was redecorated, Nick made a great fuss about his secret project to turn the third bedroom into a nursery for two-year-old Bonnie.

Sam did his best to appear amazed, but I can’t believe he and wife Becca had never thought of having one of their children sleep in the box room.

‘Grimmy’, aged 37, is enjoying an odd career. A decade ago, he occupied the coveted late-night seat on Radio 1, in the slot once sacred to John Peel. Then he went mainstream, doing the breakfast show when it was still heard by millions.

Now he’s co-presenting tacky property shows on C4. On his current trajectory, he’ll be the teaboy on Dave by the time he’s 45.

Surely he never imagined he’d be fiddling with Formica in a segment devoted to low-budget decorating: ‘This iron-on veneer is a cool way to create a solid wood look without spending loads on solid wood.’

At least he didn’t try stuffing roadkill, unlike amateur taxidermist Amy on Interior Design Masters (BBC1). She mounted a battered magpie on a perch, with a beady glass eye, and named it Malcolm. 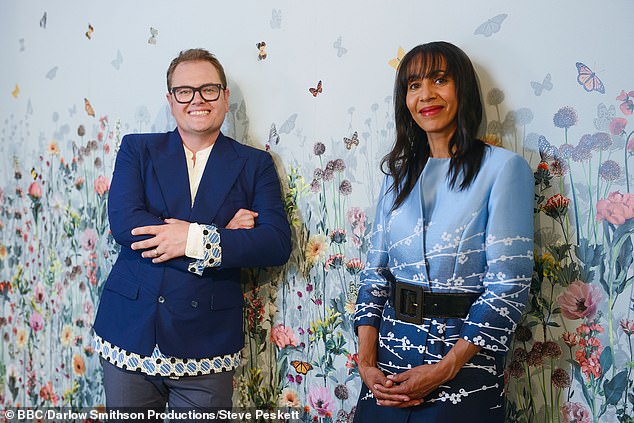 This year’s contest has been well managed: at the quarter-final stage, only the designers with the biggest personalities and egos remain

Guest judge Laurence Llewelyn-Bowen knew why. ‘One for sorrow,’ he muttered, as he turned his back on the rotting corvid.

With a stream of arch patter, LLB delivered a jolt of energy as this series reached its midpoint and started to flag. Presenter Alan Carr and judge Michelle Ogundehin were competing to match his sarcastic asides.

They were all ruthless with contestant Dean, who filled a wooden caravan with pink velvet and crocodile-skin wallpaper, in an effort to create romantic ambience. 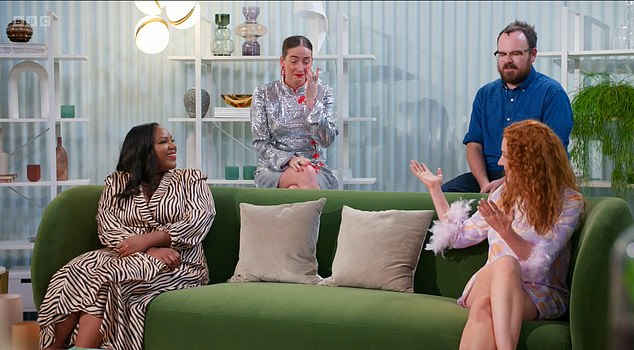 ‘If that’s romance, there is no small talk,’ said Laurence, reducing Michelle to giggles. She agreed it resembled the lair for a villainous farmer, ‘stroking a small sheep on his lap’.

No one was surprised when Dean was eliminated. This year’s contest has been well managed: at the quarter-final stage, only the designers with the biggest personalities and egos remain.

That’s smart. We’re not watching to get inspiration for interior design — it’s tearful breakdowns and manic over-confidence that fans want to see. This show has that by the 18-wheeler lorry-load.

Straight face of the night: ‘Is this an English thing — making jokes when the situation least calls for it?’ demands unsmiling lawyer Mrs Molnar in Deadline (C5). Of course it is.

Myleene Klass showcased her sensational figure in a swimsuit as she enjoyed a sun-soaked...

Japan’s former Princess Mako is now working as an UNPAID volunteer at the Met...