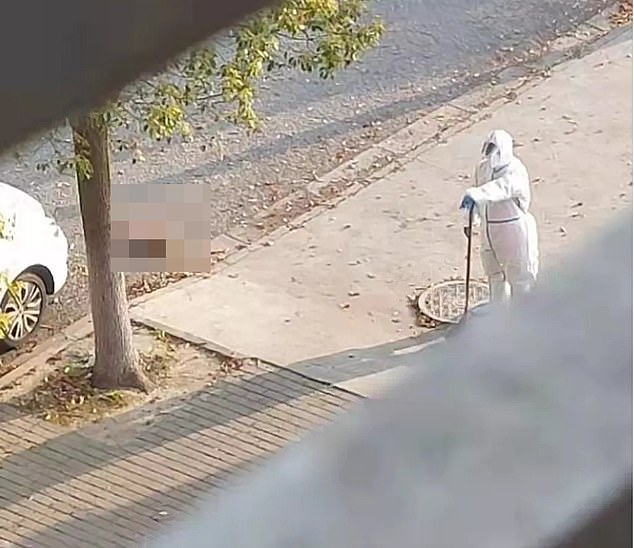 The horrifying moment that a health worker in Shanghai chased down a pet corgi and beat it to death with a shovel because its owner was infected with Covid.

Video shows a Covid prevention worker, who is wearing a full PPE suit, chasing the small dog down a street in the residential area in the Pudong district of the city.

The corgi is seen trying to hide behind a car but the health worker lunges forward and hits the dog three times with a large shovel. The pet is then seen lying motionless on the street.

Footage of the attack has gone viral on Weibo and sparked outrage amongst locals, who are growing frustrated of the harsh lockdown conditions that are leading to shortages of food and basic necessities.

Photos show the corgi running after a bus that is said to be taking its owner to an isolation centre for quarantine after they tested positive for Covid. The dog was then beaten to death by the health worker, with its body later placed in a yellow bag.

It comes as three local official in Shanghai have today been sacked over a slack response to the Covid outbreak in China‘s largest city.

An official notice on Friday gave no details of the allegations against the three officials, but said their duties in epidemic prevention and control had allowed the virus to spread, leading to a ‘serious impact’ on efforts to control the outbreak.

The notice identified those fired as Cai Yongqiang, Xu Jianjun and Huang Wei, all officials at the district, neighbourhood or township level.

Dozens of local officials across China have been sacked or otherwise punished for their Covid response, though no one at the central government has been held to account.

Shanghai announced more than 21,000 new local cases on Friday, of which only 824 had symptoms, as locals complained of crowded and unsanitary quarantine centres. 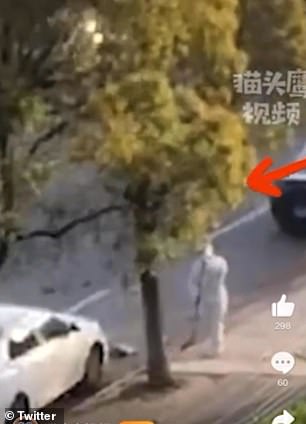 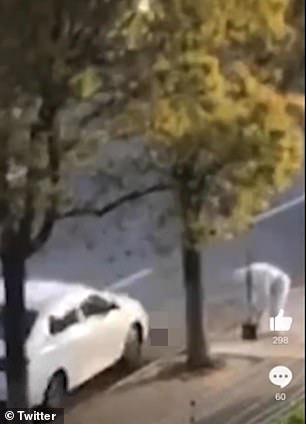 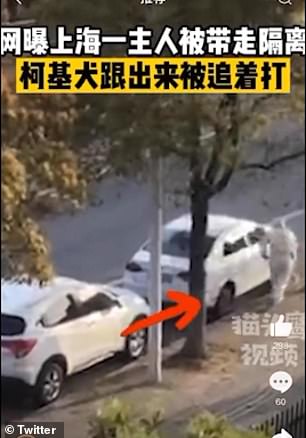 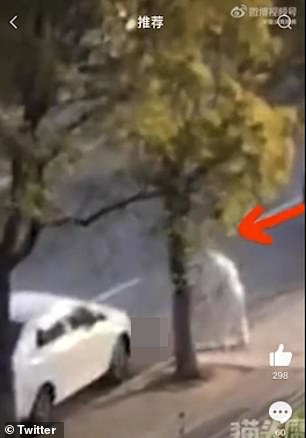 Video shows a Covid prevention worker, who is wearing a full PPE suit, chasing the small dog down a street (left) in the residential area in the Pudong district of the city before hitting it with a shovel (right)

Total cases in the outbreak that began last month in Shanghai have soared past the 100,000 mark, making it one of China’s most serious since the virus was first detected in the central city of Wuhan in late 2019.

Shanghai has placed all of its 26 million residents under lockdown and implemented mass testing, while requiring anyone with a positive result to be held in an isolation centre, some of which have been newly created from converted gymnasiums and exhibition halls.

Some residents have received government food packages containing meat and vegetables. Many, however, are struggling to obtain rice and other basics, with online vendors sold out and delivery services unable to keep up with demand.

With no word on when the lockdown will be lifted, anxiety is rising, along with frustration over the city’s apparent lack of preparation for an extended lockdown. 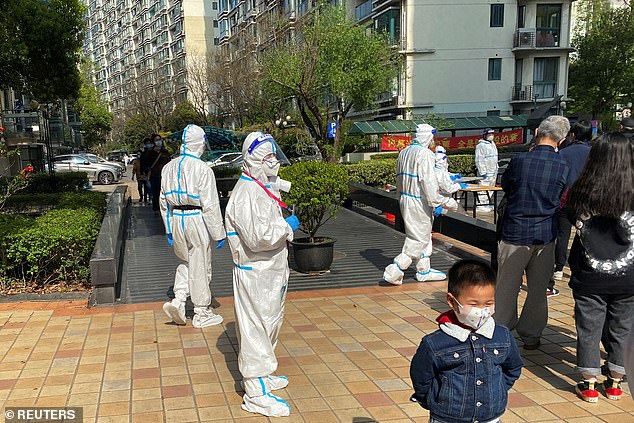 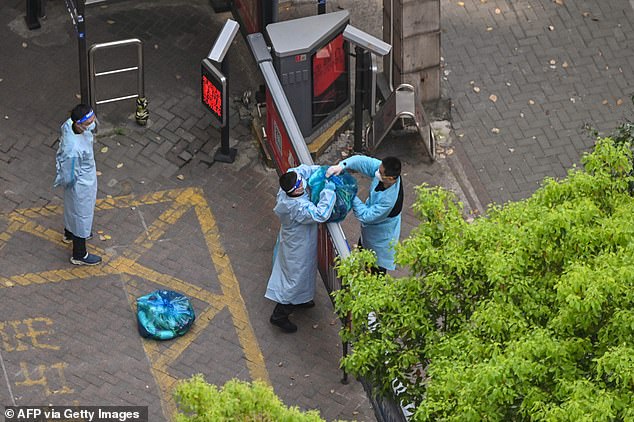 A guard, wearing personal protective gear, receives goods from a delivery worker in a compound during the Covid lockdown in the Jing’an district in Shanghai on Friday 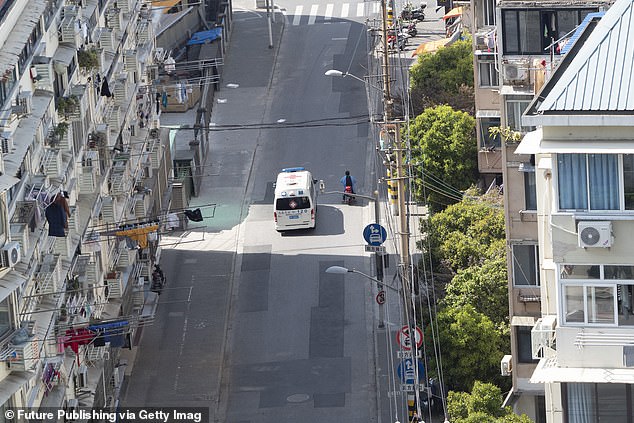 An ambulance drives up an empty street in Shanghai on Friday 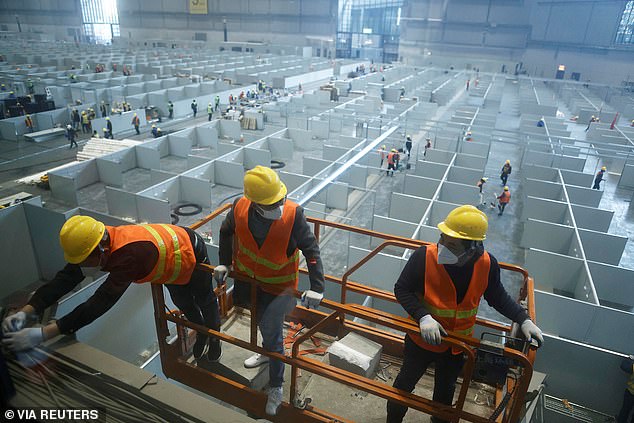 Workers are setting up a makeshift hospital for Covid-19 patients at the National Exhibition and Concention Centre in Shanghai with about 40,000 beds to cope with the surge in Covid cases

Travel in and out of Shanghai has largely come to a standstill and usually bustling city streets are deserted apart from police, health workers and residents reporting for testing.

China has repeatedly enforced lengthy mass lockdowns over the two-year course of the epidemic. Shanghai, however, had largely escaped the most onerous measures under China’s ‘zero-Covid’ strategy that aims to isolate every infected person.

Home to many of China’s wealthiest, best educated and most cosmopolitan citizens, the city was first promised a two-phase lockdown starting March 28 and lasting no more than eight days total. With little notice given, residents made a run on supermarkets, quickly leaving shelves bare.

Those measures have since been extended, leaving many families that had planned for only a limited time in quarantine without supplies. Authorities say they will determine future steps based on testing results, but have given no specific details.

Meanwhile, workers are setting up a makeshift hospital for Covid-19 patients at the National Exhibition and Concention Centre in Shanghai with about 40,000 beds to cope with the surge in Covid cases.

Stories of crowded and unsanitary central quarantine centres and fears of family separation have driven calls for home quarantine in Shanghai, and for China to review its ‘dynamic clearance’ approach.

Although the government has not acceded to these requests, it has started allowing some close contacts to isolate at home and on Wednesday eased its policy of separating infected children from their parents. It is also transferring some patients to neighbouring provinces.

However, food supply remains a concern with residents, due to a shortage of couriers. 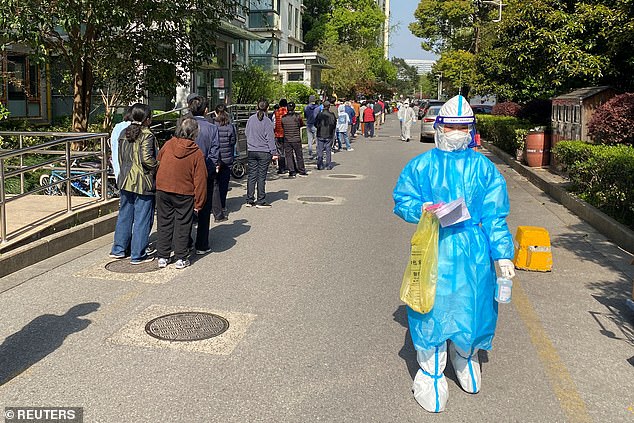 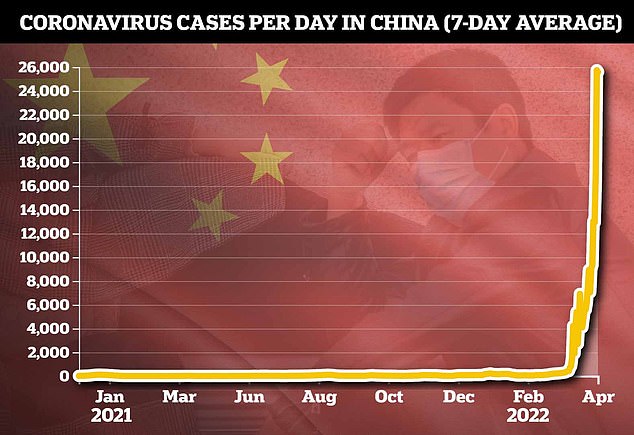 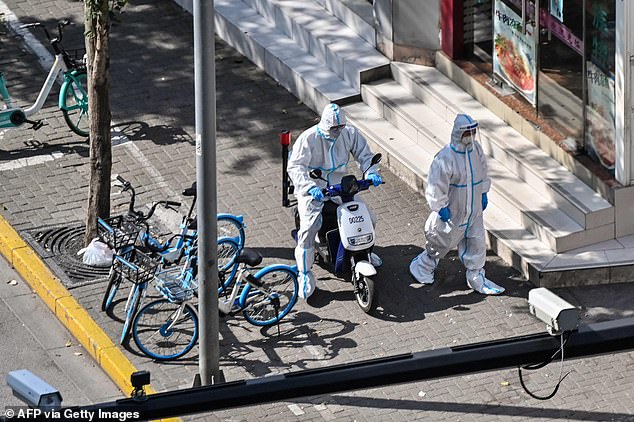 Officers, wearing personal protective equipment (PPE), walk next to the entrance of a neigbourhood in the Jing’an district in Shanghai on Friday 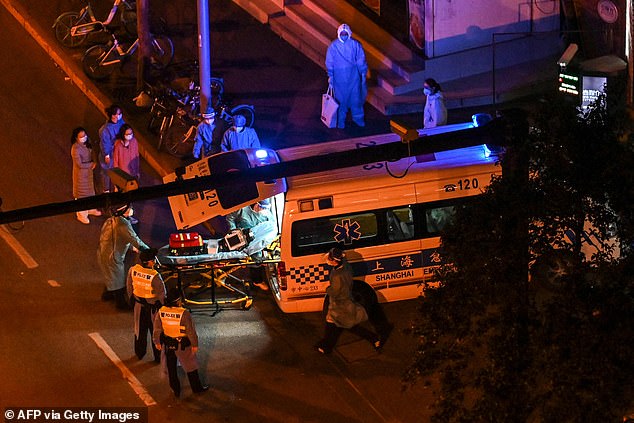 Policemen, health workers and residents stand around an ambulance as medics pull out a stretcher in response to a Covid case in the Jing’an district of Shanghai on Thursday

On Friday afternoon, an invitation to join an unofficial meeting to discuss Shanghai residents’ opinions about the Covid situation begin circulating in WeChat groups – a development interpreted by some as an indication of mounting frustration with the official response.

The anonymous organisers of the event, which was scheduled for Saturday, said they would try to submit the meeting’s minutes to the Shanghai government.

Over 100,000 people had registered for the meeting by Friday lunch time although this had abruptly fallen to four people hours later, with no clear reason given.

Shanghai has not indicated when it may lift its lockdown.

Late on Thursday, Wu Zunyou, chief epidemiologist at the China Center for Disease Control and Prevention, said on its Weibo account that action taken in Shanghai had to be ‘thunderous’ to cut off the chain of transmission.

In theory, he said, if multiple rounds of PCR testing were conducted in mega-cities with populations as large as 27 million within 2-3 days, they could reach zero cases ‘on the community level’ within 10 days to two weeks.

‘As long as these measures are implemented well, our country’s severe coronavirus epidemic situation will soon improve,’ Wu said.

Of Shanghai’s cases, just one is suffering severe symptoms and is under treatment, a health official said on Friday.

If Shanghai’s lockdown continues throughout April the city will suffer a 6 per cent loss in GDP, amounting to a 2 per cent GDP loss for China as a whole, Iris Pang, the ING Chief Economist for the Greater China bank, said.

Other Chinese cities have also tightened curbs – even in places with no recent infections – including movement restrictions, mass testing and new quarantine centres.

Cities that jumped into action this week included Zhengzhou, in central Henan province, which on Thursday said it would test all 12.6 million residents after finding a few asymptomatic cases in recent days.

Beijing has strengthened regular screening for employees in the city’s key sectors, requiring all staff at elderly care agencies, schools and institutions handling imported goods to take tests at least once a week. 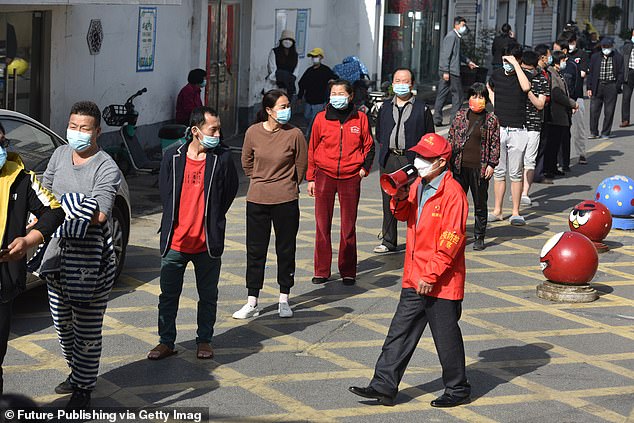 In Shizong county in southwest China’s Yunnan province, shops were shut, transport suspended and residents barred from leaving their towns or villages after an asymptomatic person returned home from Shanghai and infected a household member.

On Friday the northwestern city of Xian announced it would not allow its citizens to return from or visit areas where the virus is still highly prevalent without making arrangements with pandemic control departments first.

Nomura this week estimated that 23 Chinese cities have implemented either full or partial lockdowns. The cities collectively are home to an estimated 193 million people and contribute 22 per cent of China’s GDP. These include Changchun, a major manufacturing hub that has been locked down for 28 days.

Ernan Cui, an analyst at Gavekal Dragonomics who studied COVID policies announced by China’s 100 largest cities, said most were choosing to keep restrictions in place even after case numbers returned to zero. 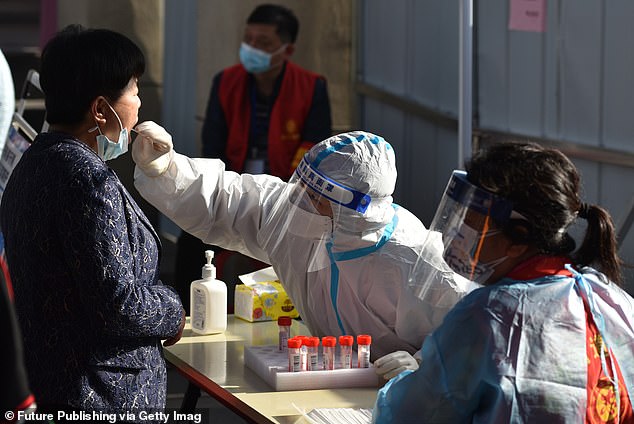 ‘The extremely widespread Covid restrictions beyond Shanghai, and the risk-averse attitude of both central and local government officials, suggest that the economic impact of the various lockdowns will not ease in a matter of days or even weeks,’ she said in a note.

City officials have apologised for mishandling the lockdown and promised to improve food supplies.

The Communist Party leadership in Beijing is working to squelch complaints, especially online, in hopes of preventing the lockdown and accompanying dissatisfaction from becoming a political issue ahead of a key party congress later this year.

Officials say Shanghai, home to the world’s busiest port and China’s main stock exchange, has enough food. But a deputy mayor, Chen Tong, acknowledged Thursday that getting it the ‘last 100 meters’ to households is a challenge.

The government says it is trying to reduce the impact of its tactics, but authorities are still enforcing curbs that also block access to the industrial cities of Shenyang, Changchun and Jilin with millions of residents in the northeast.

AMAs 2022 WINNERS: Dove Cameron dedicates new artist of the year honor to the...

Britons brace for a week of downpours as Met Office issues warning for rain...

Retired restaurant owner, 78, is arrested after feeding homeless people without a permit