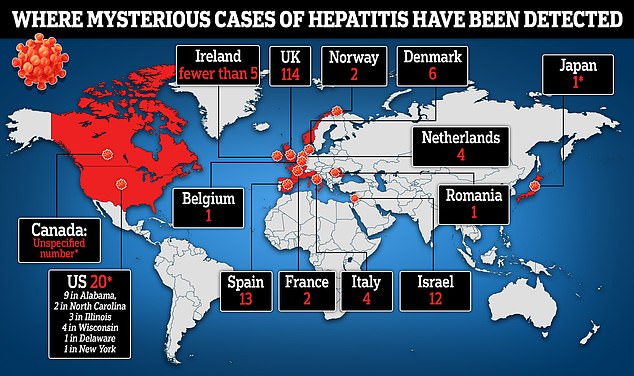 A child has died of suspected hepatitis in the US, with six states now investigating cases of the mystery illness sweeping the world.

Wisconsin’s Department of Health Services announced four youngsters have been struck down with unusual liver damage. One died and another needed a transplant, officials said.

If the death is confirmed to be down to the unusual type of hepatitis, it would be the first confirmed in the US and second in the world.

Cases of the peculiar illness have already been spotted in Alabama, North Carolina and Delaware. Health chiefs in Illinois and New York are currently probing reports of similar occurrences.

In total, there have been at least 20 suspected cases in the US.

Dr Anthony Fauci, chief medical advisor to President Joe Biden, said the cause of the illness is ‘still a mystery’.

Nearly 200 children have been sickened by the condition across the world in up to 14 countries. At least 18 have needed liver transplants.

Nearly 200 children have been sickened by the condition across the world in up to 14 countries since last October *cases in Canada, Japan and Wisconsin, Illinois and New York are still yet to be confirmed 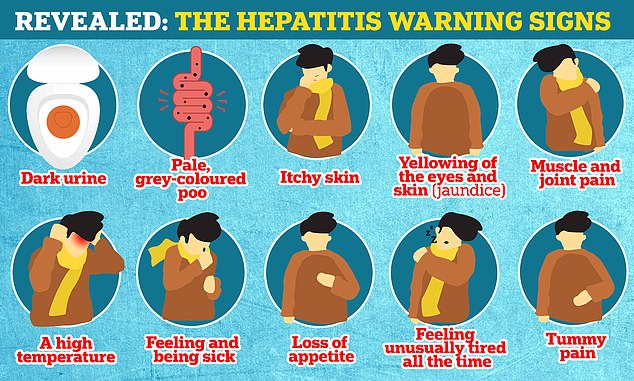 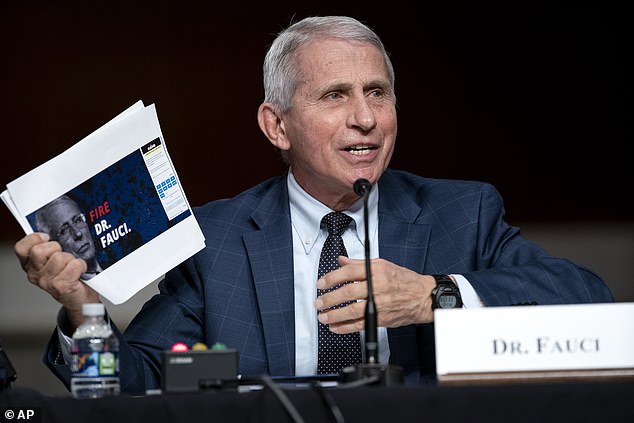 Dr Anthony Fauci, chief medical advisor to President Joe Biden, said the cause of the illness is ‘still a mystery’

WHAT COULD BE BEHIND THE HEPATITIS OUTBREAK?

While experts believe adenovirus — a virus associated with many common colds — could be behind the spate of cases, the jury is out on what the exact cause of the outbreak is.

One theory suggests children being infected with Covid and adenovirus at the same time could be at greater risk of hepatitis.

British experts have suggested lockdowns and restrictions have put children at greater risk because they have lower natural immunity to adenovirus.

Other scientists said it may have been an adenovirus that has acquired ‘unusual mutations’.

UKHSA officials included ‘a new variant of SARS-CoV-2’ in their working hypotheses, when discussing the variant at  the European Congress of Clinical Microbiology & Infectious Diseases in Lisbon today.

Medics have been left puzzled by what is behind the spate of cases — with the usual hepatitis A, B, C, D and E viruses excluded from laboratory test results.

Health chiefs believe the illness may be triggered by an adenovirus, which usually causes common colds.

Dr Fauci told Bloomberg: ‘It’s still a mystery. It seems to be associated with adenovirus, but it isn’t a slam dunk.’

Alabama was the first state to announce cases of the severe liver injury two weeks ago.

Nine children were hospitalised in the state between November and February.

Three had acute liver failure and all of the children tested came back positive for adenovirus.

Two required liver transplants but all of them survived.

Delaware this week reported that a child younger than five was hospitalised by the same mysterious hepatitis. They are still undergoing treatment.

One child has now been confirmed dead in Wisconsin, with officials yesterday revealing they are investigating whether their liver injury was linked to the same cluster of cases.

The Wisconsin DHS said: ‘Since being notified of this adenovirus-associated hepatitis cluster, DHS is now investigating at least four similar cases among children in Wisconsin.

‘This includes two children who had severe outcomes, one liver transplant, and one fatality.’

Illinois officials said they had spotted three probable cases of severe hepatitis on Monday and one child required a liver transplant.

Dr Tina Tan, pediatric infectious disease physician at Lurie Children’s Hospital in Chicago, said the cases are most likely to be caused by a virus because they are appearing in clusters.

She told Bloomberg: ‘What’s most unusual about all of this is that adenovirus does not usually cause severe hepatitis in kids with no underlying health conditions.’

And health officials in New York state yesterday revealed they are investigating a cases that appears to match descriptions of the mystery illness.

The condition — which was first spotted in Scotland at the end of March — has been detected 114 times in Britain.

Covid lockdowns may be behind the mysterious spate of hepatitis cases in children because they reduced social mixing and weakened their immunity, experts claim

Experts say lockdowns may have weakened the immunity of children and left them more susceptible to the virus, or it may be a mutated version.

Investigations are ongoing but officials have yet to rule out a new Covid variant being to blame.

Another theory is that children may have been battling the adenovirus at the same time as Covid.

UK health officials have ruled out the Covid vaccine as a possible cause, with none of the ill British children having been vaccinated because of their young age.

Liver experts described the spate of cases as ‘concerning’ but said parents should not worry about the illness affecting their children.

Q&A: What is the mysterious global hepatitis outbreak and what is behind it?

What do we know about the global hepatitis outbreak?

Scientists have been left puzzled by a global outbreak of hepatitis that has caused one death and 17 liver transplants.

The inflammatory liver condition has been spotted in at least 169 children aged between one month and 16 years old.

None of the cases have been caused by  any of the five typical strains of the virus — hepatitis A, B, C, D and E.

Hepatitis is inflammation of the liver that is usually caused by a viral infection or liver damage from drinking alcohol.

Hepatitis often has no noticeable symptoms — but they can include dark urine, pale grey-coloured faeces, itchy skin and the yellowing of the eyes and skin.

Infected people can also suffer muscle and joint pain, a high temperature, feeling and being sick and being unusually tired all of the time.

When hepatitis is spread by a virus, it’s usually caused by consuming food and drink contaminated with the faeces of an infected person or blood-to-blood or sexual contact.

How many countries have cases been recorded in?

*cases in Canada, Japan and Illinois, US, are still yet to be confirmed

Do we know what is behind the outbreak?

Experts say the cases may be linked to a virus commonly associated with colds, but further research is ongoing.

This, in combination with Covid infections, could be causing the spike in cases.

The WHO reported adenovirus has been detected in at least 74 of the cases. At least 20 of the children tested positive for the coronavirus.

British experts tasked with investigating the spate of illnesses believe the endless cycle of lockdowns may have played a contributing role.

Restrictions may have weakened children’s immunity because of reduced social mixing, leaving them at heightened risk of adenovirus.

Public Health Scotland researchers said more children could be ‘immunologically naive’ to the virus because of restrictions.

Other scientists said it may have been a virus that has acquired ‘unusual mutations’.

This would mean it could be more transmissible or better able to get around children’s natural immunity.

UKHSA officials included ‘a new variant of SARS-CoV-2’ in their working hypotheses, when discussing the variant at  the European Congress of Clinical Microbiology & Infectious Diseases in Lisbon.

The UKHSA has noted Covid as well as other infections and environmental triggers are still being probed as possible causes of the illnesses.

The agency ruled out the Covid vaccine as a possible cause, with none of the British cases so far having been vaccinated because of their age.

Comic Leslie Jordan says in one of his final interviews he got ‘happiness’ from...

Body expert reveals Kate Moss ‘lit up with warmth’ while testifying on behalf of...