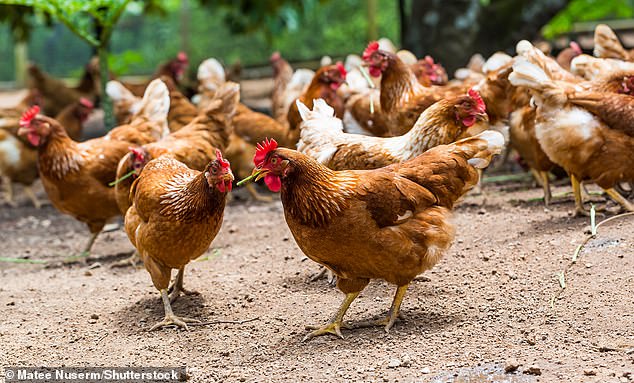 Today, chickens are a staple of the farmer’s paddock and one of the world’s most furiously farmed meats.

But new research shows the ubiquitous birds were originally worshipped and revered as companions before being eaten.

An international team has analysed historical chicken remains found in more than 600 sites in 89 countries, including England, Italy, Turkey, Morocco and Thailand.

Results suggest the bird was first domesticated only 3,500 years ago in southeast Asia before spreading west to Europe.

Domestication was triggered by dry rice farming, which drew wild jungle fowl, the modern chicken’s ancestor, down from the trees in around the year 1500 BC.

Prior to this, chickens were regarded as ‘exotica’ – unusual or tropical because they came from another country.

Ancient humans were even buried with chickens, suggesting the birds were ‘psychopomps’ – creatures thought to escort the human soul to the next life.

The chicken (Gallus domesticus, pictured) is already thought to have descended from the red junglefowl (Gallus gallus), which ranges across much of Southeast Asia. The chicken domestication process was underway by around 1,500 BC in the Southeast Asia peninsula, the researchers say 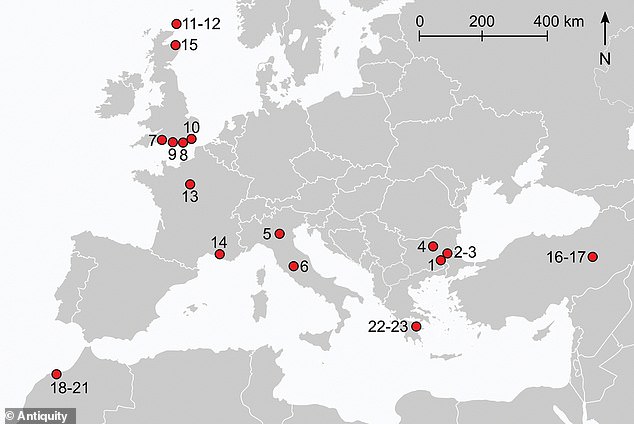 An international team of scientists have analysed chicken remains found in more than 600 sites in 89 countries, including England, Italy and Turkey 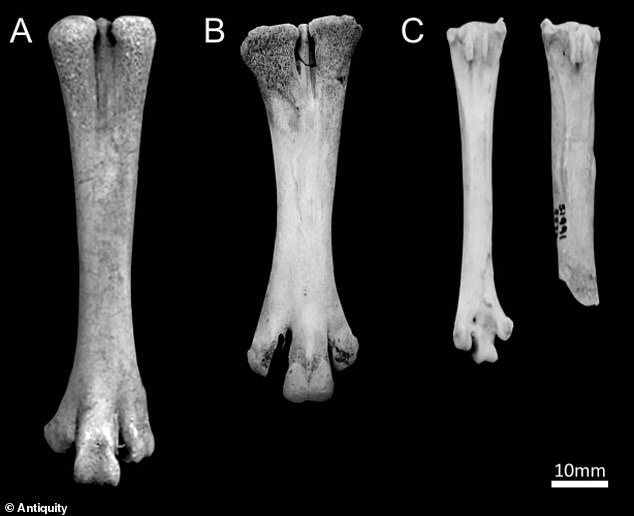 DOMESTIC ORIGIN OF THE CHICKEN

The chicken (Gallus domesticus) is already known to have descended from the red junglefowl (Gallus gallus),

The red junglefowl is still alive today and ranges across much of Southeast Asia.

This domestication process was underway by around 1,500 BC in the Southeast Asia peninsula, experts say.

Gallus domesticus evolved to be less active and less aggressive to predators, which may help humans intensively farm the species today.

Before 1,500 BC, chickens were likely considered too rare or too important to be slaughtered for meat, say the research team, which includes experts from the universities of Exeter, Cardiff, Oxford, Bournemouth, Munich and Toulouse.

Their research has been published today in two studies, in the journals Antiquity and Proceedings of the National Academy of Sciences USA.

‘Eating chickens is so common that people think we have never not eaten them,’ said study author Professor Naomi Sykes at the University of Exeter.

‘Our evidence shows that our past relationship with chickens was far more complex, and that for centuries chickens were celebrated and venerated.’

The chicken (Gallus domesticus) is already known to have descended from the red junglefowl (Gallus gallus), which ranges across much of Southeast Asia.

Researchers say the driving force behind chicken domestication was the arrival of dry rice farming in southeast Asia where the red jungle fowl lived.

Dry rice farming acted as a magnet drawing wild jungle fowl down from the trees, kickstarting a closer relationship between people and the jungle fowl that resulted in chickens. 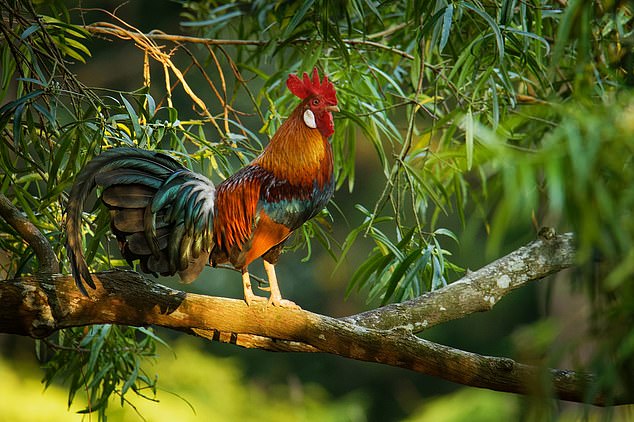 The red junglefowl (Gallus gallus, pictured) is still alive today and ranges across much of Southeast Asia. 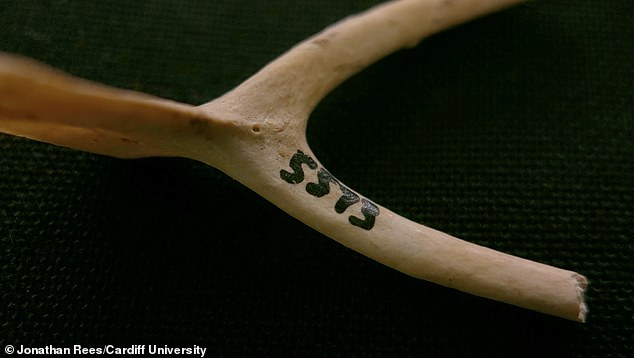 Pictured, a labelled furcula (wishbone) from a Weston Down Iron Age hen in the Cardiff University lab

Modern egg-farm practices are breaking chickens’ bodies, according to a recent study.

Forced to produce more than 10 times their normal number of eggs, farm hens quickly lose calcium and develop brittle bones and fractures and can become egg bound, or unable to push out their egg.

According to the University of Copenhagen, the pressure of trying to force out eggs that are too large for their bodies is causing roughly 85 percent of Danish hens to suffer fractures in their keel bone, a prominent bone that juts out from their breast and connects their torso and wing muscles.

‘Wet rice is typically grown in waterlogged paddies; dry rice is a different variant of rice that does not require being water logged and the way in which people grow and harvest this variety makes a different ecological footprint.

‘Wet rice was grow in southeast Asia for a while but it was only when people growing dry rice arrived that we see the first evidence of chickens.

‘[This] suggests that red jungle fowl were attracted to the dry rice farming practice and that’s what kick started the relationship that led to chickens.’

For their analysis, the team considered factors such as size, shape and cut marks to determine what species thousands of chicken bones were from, and whether they were likely to be wild jungle fowl or domestic birds.

The oldest bones of a definite domestic chicken were found at Neolithic Ban Non Wat in central Thailand, and date to between 1,650 and 1,250 BC.

This suggests the domestic chicken can be dated as far back as around 3,500 years, which is around the time that dry rice agriculture emerged.

‘The timing of the bones matches the timing of the first appearance of people practicing dry rice agriculture into a region where the specific red jungle fowl ancestor of chickens was present,’ Professor Larson told MailOnline.

‘Its such a tight correlation that we are hypothesising a causation, and it makes sense given what we know about the bird’s behaviour, foraging strategies, and the ecology of dry rice practices.’

During the Iron Age in Europe, in the first millennium BC, chickens were venerated and generally not regarded as food, the team say.

While several of the earliest chickens were found buried alone and un-butchered, many were also found buried with people, suggesting they were kept as beloved pets. Male humans were often buried with cockerels and females with hens.

The Roman Empire, during the first millennium AD, then helped to popularise chickens and eggs as food.

For example, in Britain, chickens were not regularly consumed until the third century AD, mostly in urban and military sites.

The team also used radiocarbon dating to establish the age of 23 of the proposed earliest chickens found in western Eurasia and north-west Africa.

Results suggest most of the bones were far more recent than previously thought and dispel claims of chickens in Europe before the first millennium BC. 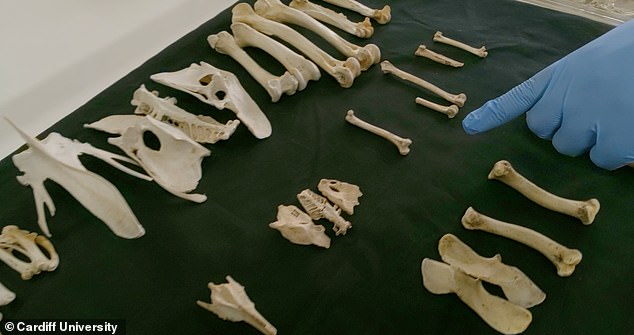 For their analysis, the team considered factors such as size, shape and cut marks to determine what species thousands of chicken bones were from 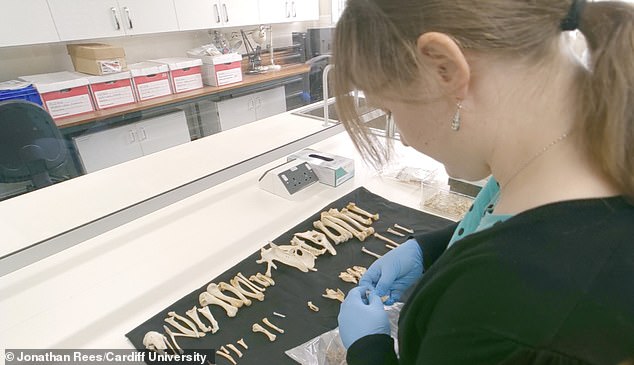 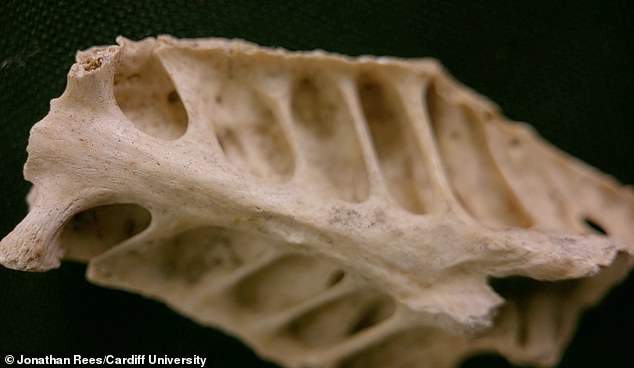 A chicken synsacrum (a skeletal structure of birds and dinosaurs) found at Weston Down, England 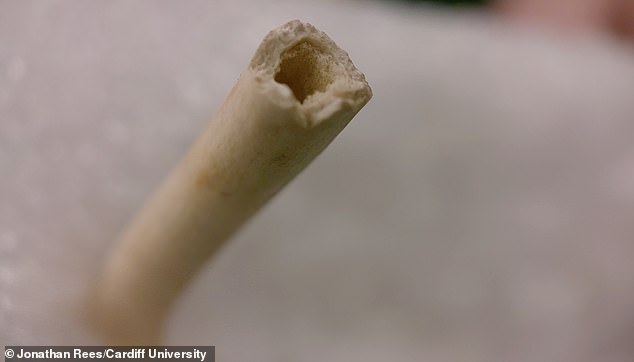 Chicken medullary bone from Weston Down. A porous and spongy layer forms inside the bones of females when they are going to lay eggs

In fact, researchers say chickens did not arrive until in Europe around 800 BC, having entered the Mediterranean region from Asia, along routes used by early Greek, Etruscan and Phoenician maritime traders.

After arriving in the Mediterranean region, it took almost 1,000 more years for chickens to become established in the colder climates of Scotland, Ireland, Scandinavia and Iceland.

‘Modern meat birds today – they’re generally raised very fast, they put on a lot more weight than they would ever have traditionally had to bear on their skeleton, and they die very young,’ said study author Dr Julia Best at Cardiff University.

‘This is very different to some of our earliest chickens, which look to have lived for several years, were treated as special creatures given some degree of care.’

Researchers conclude that a ‘trend toward perceiving chickens solely as dietary protein has accelerated to the present day’.

‘Whereas the earliest chickens in Europe were rare and lived beyond maturity, today this is often inverted,’ they say.

‘Of the more than 70 billion chickens now on the planet, most are commercially raised broilers that grow exceptionally quickly during their short lives.’

According to the European Food Safety Authority, the average chicken age at slaughter is just 42 days.

WHAT DO WE KNOW ABOUT IRON AGE BRITAIN?

The Iron Age in Britain started as the Bronze Age finished.

It started around 800BC and finished in 43AD when the Romans invaded.

As suggested by the name, this period saw large scale changes thanks to the introduction of iron working technology.

During this period the population of Britain probably exceeded one million.

This was made possible by new forms of farming, such as the introduction of new varieties of barley and wheat.

The invention of the iron-tipped plough made cultivating crops in heavy clay soils possible for the first time.

Some of the major advances during included the introduction of the potter’s wheel, the lathe (used for woodworking) and rotary quern for grinding grain.

There are nearly 3,000 Iron Age hill forts in the UK. Some were used as permanent settlements, others were used as sites for gatherings, trade and religious activities.

At the time most people were living in small farmsteads with extended families.

The standard house was a roundhouse, made of timber or stone with a thatch or turf roof.

Burial practices were varied but it seems most people were disposed of by ‘excarnation’ – meaning they were left deliberately exposed.

There are also some bog bodies preserved from this period, which show evidence of violent deaths in the form of ritual and sacrificial killing.

Towards the end of this period there was increasing Roman influence from the western Mediterranean and southern France.

It seems that before the Roman conquest of England in 43AD they had already established connections with lots of tribes and could have exerted a degree of political influence.

After 43AD all of Wales and England below Hadrian’s Wall became part of the Roman empire, while Iron Age life in Scotland and Ireland continued for longer.