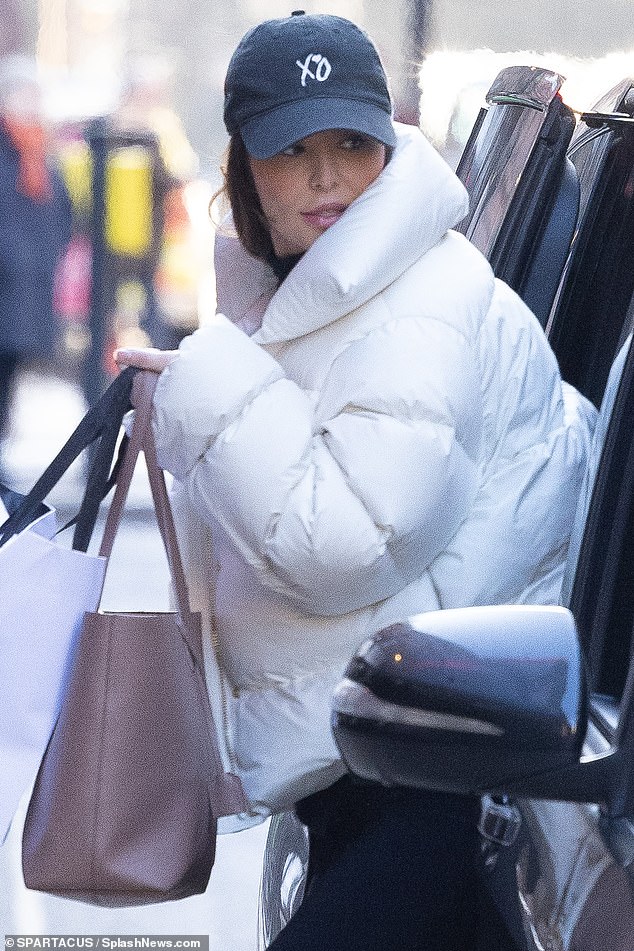 Cheryl is pictured arriving at rehearsals for 2:22 A Ghost Story for the first time wearing a The Weeknd cap after it was revealed her son Bear, 5, is ‘obsessed with the singer’

Cheryl was pictured arriving at rehearsals for her West End debut in 2:22 A Ghost Story, ahead of her opening performance at the Criterion Theatre on Saturday.

The singer, 39, looked beautiful when she arrived, wearing a white padded jacket as she ducked out of her car and darted into the theatre.

And no wonder she was smiling, because it’s been reported that Cheryl will pocket £750,000 for four months work on the London play, after taking over the role from Laura Whitmore.

Stepping out: Cheryl was pictured arriving at rehearsals for 2:22 A Ghost Story for the first time on Thursday wearing a The Weeknd cap after it was revealed her son Bear, 5, is ‘obsessed with the singer’

Cheryl was wearing a cap which had The Weeknd emblazoned on it after her ex Liam Payne revealed their son Bear, five, is a huge fan of the singer.

He previously said: ‘I mean, he went to rehearsal with [Cheryl] the other week for her show that she put on and he stole the microphone off, he went topless, he had the dancers dancing around. He’s obsessed with The Weeknd and Ariana Grande.’

She was also carrying a bag from lingerie brand Wolford in hand and a taupe leg as she walked in wearing wide-leg trousers. 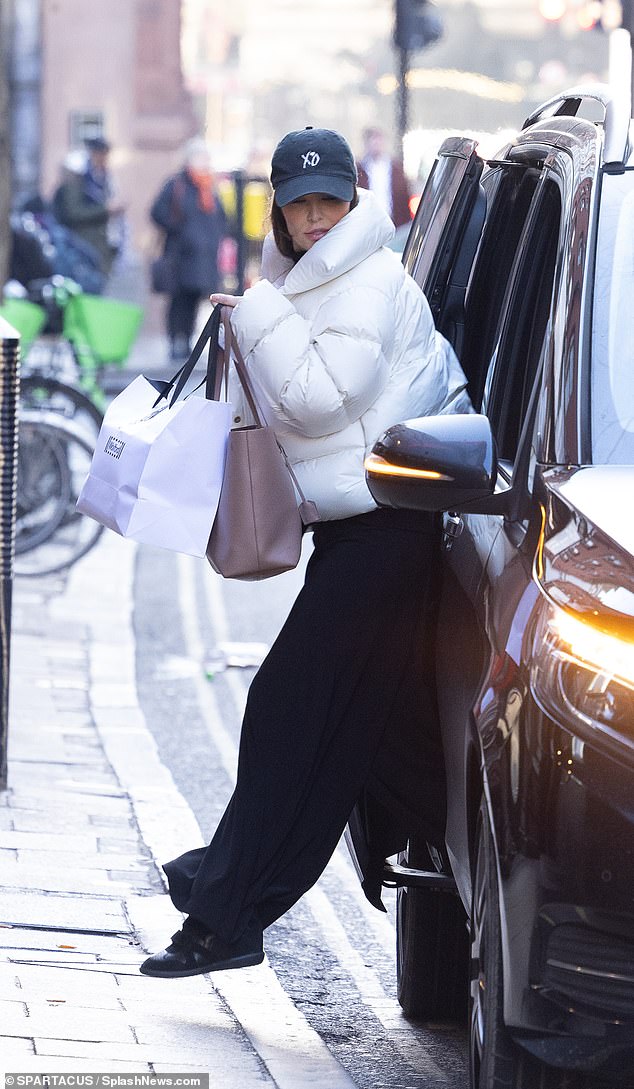 Saucy: She was also carrying a bag from lingerie brand Wolford in hand and a taupe leg as she walked in wearing wide-leg trousers

It’s been claimed that Cheryl is hoping to ‘reinvent herself’ with a big stage role after a three-year hiatus from the spotlight.

A source told new! magazine: ‘Cheryl wants to reinvent herself in 2023. She was on TV all the time, she was the sweetheart of the nation. But she stepped back for a while to focus on being a mother.

‘She’s excited to be coming back. Some things haven’t worked out in the past that she’s tried, but this is a very exciting time for her.’

Cheryl is reportedly set to pocket one of the biggest fees in West End history for her stint in the play, with sources claiming she’ll earn £750,000 for four months work.

A source told The Sun: ‘The producers know this will get everyone talking, but it will ruffle feathers.’

It was previously reported that Cheryl would be earning at least £100,000 for her work in the play, despite facing criticism for her casting due to her lack of acting experience.

After signing up to appear in 106 shows, The Sun reported earlier this wee that an industry booker revealed: ‘Cheryl is getting around £1,000 a show.

‘The deal is £100,000 but will also be linked to ticket sales so if she helps shift around 80% of seats then she’ll be entitled to more money on top of that.’

Just last month, Cheryl was announced as the new lead in the popular play, taking over the part of Jenny.

Cheryl excitedly shared the news on Instagram, gushing that ‘it is a totally new experience for me.’

The star has previously played herself in Hollywood movie What To Expect When You’re Expecting and had a small role as a cutthroat music agent in 2020 film Four Kids And It.