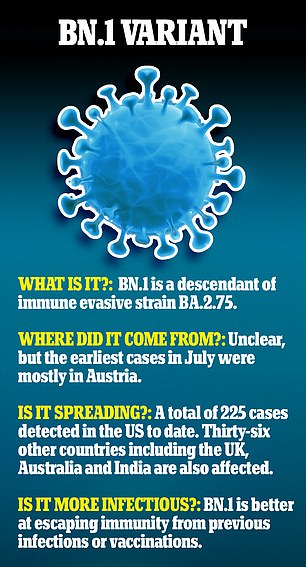 Health chiefs are monitoring a new mild, but vaccine-resistant, strain of Covid as hospital admissions for the virus begin to rebound.

The BN.1 variant is now behind one in 20 infections nationwide, estimates suggest, with numbers doubling roughly every two weeks.

For comparison, about a month ago the strain was behind just one in 100 infections estimates suggest.

The Centers for Disease Control and Prevention (CDC) has now added the variant to its watch list.

Its rapid rise suggests it has an evolutionary advantage over the other circulating strains.

It is now the sixth most common in the country since arriving in September. The most common are BA.5, and its spin-off variants BQ.1.1. and BQ.1.

There is no evidence to date that BN.1 or any of the new subvariants are more likely to cause hospitalization or death.

While in the past there have been just one or two dominant global variants, Covid now appears to have splintered into a swarm of closely-related sub-variants.

They all derive from the Omicron strain which sent worldwide case numbers to record highs and they all contain similar mutations.

Weeks prior, there were concerns about BA.275, the predecessor to BN.1 which took off in South Asia.  BQ1.1 started to take off in Europe before spreading to America.

It comes after hospitalizations in the US rose by 3.5 per cent in a week to 3,400 admissions a day. Cases and deaths remain flat. The new BN.1 variant is unlikely to be behind the rise because it is still spreading in relatively low numbers.

But the US healthcare system is facing a ‘tripledemic’ of Covid, flu and RSV at the same time, as seasonal menaces rebound while virus-control measures ease.

Several pediatric children’s hospitals are now at capacity nationwide, while others are having to erect tents to care for extra patients. 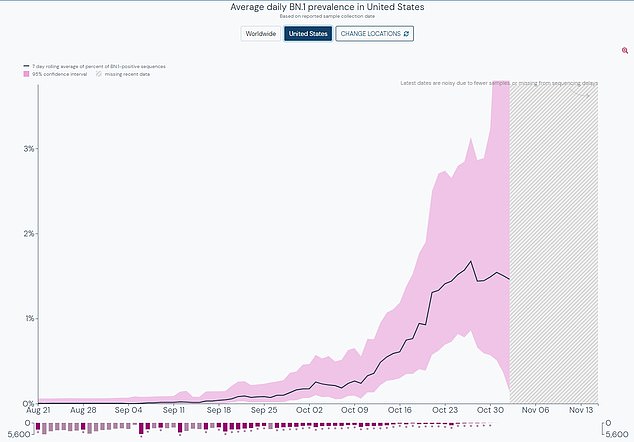 The above graph shows the proportion of cases in the US that are testing positive for BN.1. Out of all that are tested about four per cent are. Figures are doubling every two weeks, the CDC estimates 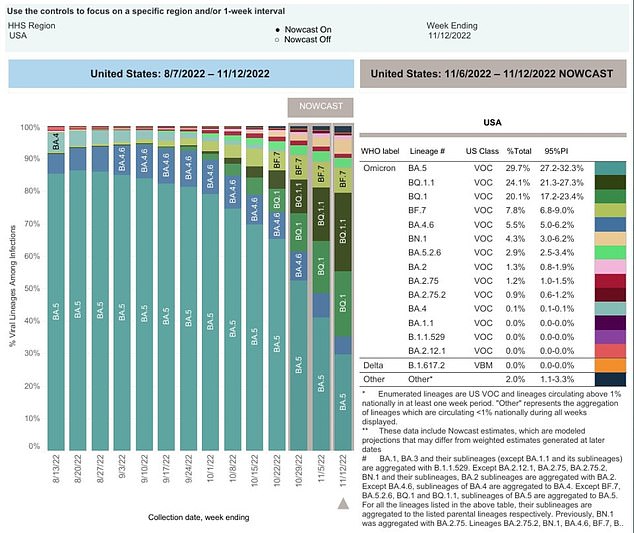 BN.1 is now the sixth most common Covid strain in the US, CDC estimates show. The variant BA.5 remains the most common

The updated bivalent boosters do not target BN.1, but experts say they should still improve protection by improving the immune system.

Just 225 cases of BN.1 have been detected in the US to date, mostly in California, New York and Florida. In the UK, 55 cases have been confirmed.

These are vast underestimates because not every positive Covid swab is analyzed for subvariants.

Since the strain emerged in late July, it has spread to 36 countries with 1,732 cases detected nationally, including in the UK, France and India.

US health chiefs revealed last month they were ‘monitoring’ a new Covid variant that is feared to be the ‘most vaccine-resistant yet’.

The Centers for Disease Control and Prevention (CDC) said the strain — dubbed ‘XBB’ — was still ‘very rare’ in the US with just 52 cases detected in 15 states by the end of October.

But in a variant update today they confirmed they were keeping ‘a close eye’ on it after Singapore’s cases doubled in a fortnight.

Health chiefs are also tracking the BQ.1 and BQ.1.1, which they said was spreading ‘relatively quickly’ on American soil.

They now account for one in five infections, double the level a week ago.

XBB is another spin-off of the Omicron variant and has been blamed for Singapore’s sudden surge in infections.

The alarm has been sounded by experts including Dr Raj Rajnarayanan at the New York Institute of Technology who said it was the ‘most immune evasive yet’.

The CDC added BN.1 to its Covid variant dashboard on Monday.

It now makes up about 4.3 per cent of infections nationwide, almost double the 2.7 per cent from a fortnight ago.

In a meeting of the Infectious Diseases Society of America over the weekend, Dr Natalie Thornburg, a microbiologist at the CDC, said cases of the strain may now be doubling every two weeks.

‘The uncertainty in that doubling time is a little higher because the absolute number of sequences is low, because the proportions are low,’ she said.

Scientists warn that it is likely better at dodging immunity than others based on lab tests of its predecessor BA.2.75 – itself an evolved version of the original Omicron variant.

Modeling by the Fred Hutchinson Cancer Center’s Bloom Lab in Seattle, Washington, also warned the new subvariant was likely better at escaping prior immunity – through vaccination or natural infection.

But there is no evidence at this stage that it is more likely to cause serious disease, hospitalization and death among those who catch it.

Bivalent vaccines are likely to be just as effective against this strain as others, however, after studies suggested they were no better at targeting BA.4 or BA.5 — which they were designed for — as well as other variants.

Last month the CDC also said it was monitoring the strain XBB — a merger between BJ.1 and BA.2.75 variants — dubbed the ‘most vaccine resistant ever’.

XBB sparked a sharp uptick in Covid cases in Singapore, but it has failed to gain a foothold in other nations.

The strain remains ‘very rare’ in the US, scientists say — and is yet to be added to the CDC’s monitoring tool.

XBB is another spin-off of the Omicron variant and was blamed for Singapore’s sudden surge in infections.

The alarm was sounded by experts including Dr Rajnarayanan who said it was the ‘most immune evasive yet’. 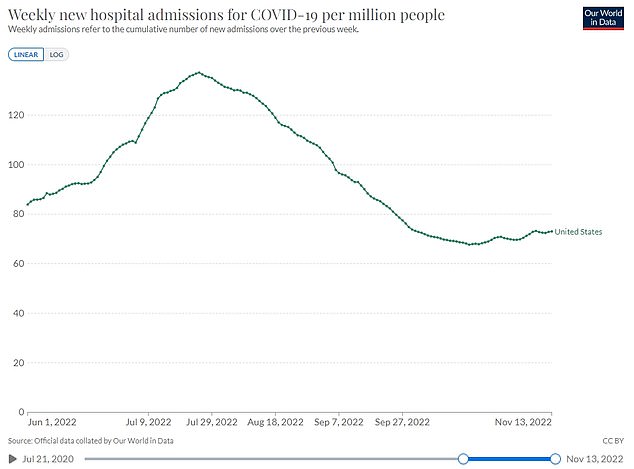 Shown above is a chart of weekly Covid hospitalizations per million people in the US. It shows a slight uptick in recent weeks as winter begins 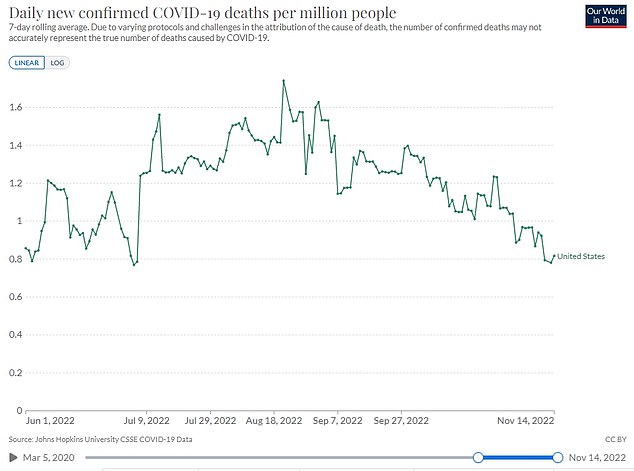 This graph shows Covid deaths in the US since June this year. Fatalities are now trending at about 300 a day — a level they have been at since September 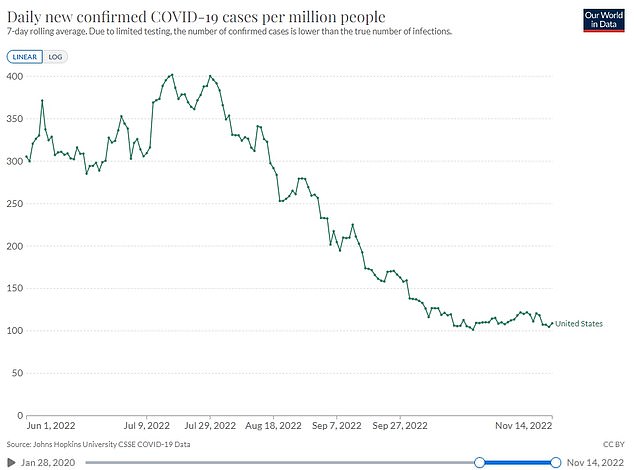 Covid cases in the US are also flatlining at about 40,000 a day, but this is thought to be a large underestimate due to a lack of testing

It comes after it was revealed ten times more elderly Americans are being hospitalizaed with common cold viruses than usual and tents have been erected outside hospitals owing to the ‘tripledemic’ gripping the US.

Several pediatric hospitals are already at or near record levels of capacity for this time of year and flu rates are the highest they’ve been since the 2009 swine flu pandemic.

Experts say the ‘immunity gap’ that emerged during lockdowns, working from home and mask mandates deprived Americans of important exposure to germs that strengthens their immune system.

The CDC reports that 7.4 out of every 100,000 Americans 65 or older have been hospitalized with a respiratory illness so far — numbers not usually seen until the depths of winter.

That figure is ten-fold higher than before the pandemic. But the rate is dwarfed by pediatric hospitalizations, with 50.6 out of every 100,000 children 17 or younger admitted for a respiratory bug this season.

The wave is being driven by respiratory syncytial virus (RSV) and the flu – which have come roaring back this year after largely disappearing during the first two years of the COVID-19 pandemic.

RSV usually causes just a mild cold in more people, but the virus can be especially harmful to young children. The CDC reports around 500 pediatric deaths from it each year.

Lisa Wilkinson takes a swipe at Elon Musk after Twitter takeover: The Project