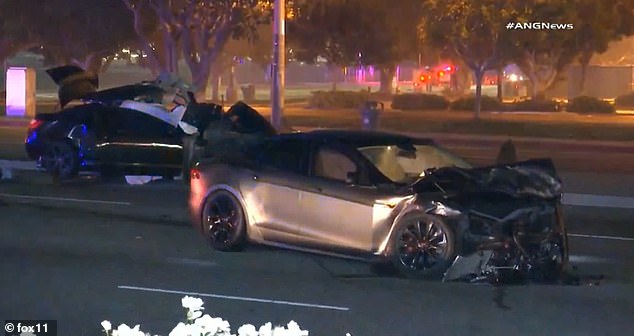 The driver of a Tesla operating on Autopilot must stand trial for a crash that killed two people in a Los Angeles suburb, a judge ruled Thursday.

There is enough evidence to try Kevin George Aziz Riad, 27, on two counts of vehicular manslaughter in the 2019 crash in Gardena, a Los Angeles County judge said.

It is believed to be the first felony prosecution in the U.S. against a driver who was using using a partially automated driving system.

Police said the Tesla Model S left a freeway and ran a red light in Gardena and was doing 74 mph when it smashed into a Honda Civic at an intersection on December 29, 2019.

The crash killed Gilberto Alcazar Lopez, 40, of Rancho Dominguez and Maria Guadalupe Nieves-Lopez, 39, of Lynwood, who were in the Civic and were on their first date that night, relatives told the Orange County Register.

Kevin George Aziz Riad, 27, will stand tria on two counts of vehicular manslaughter in the 2019 crash (above) in Gardena, a Los Angeles County judge said Thursday 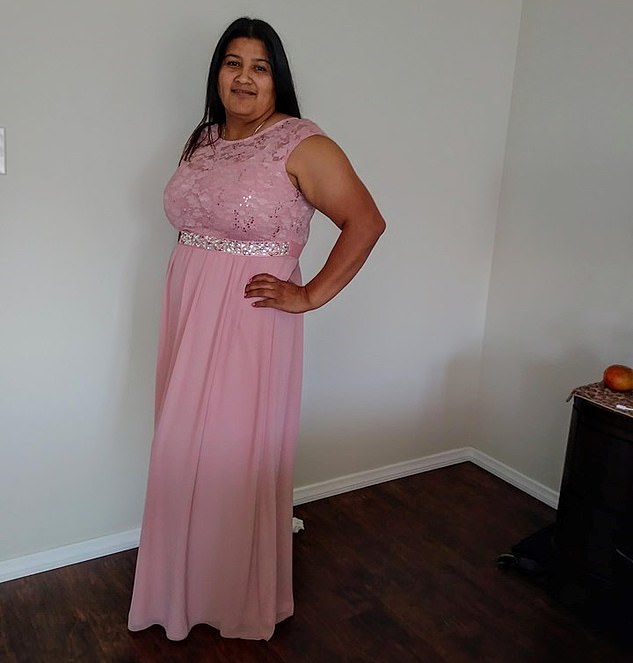 Maria Guadalupe Nieves-Lopez, 39, died after she was hit by a speeding Tesla on Autopilot near a freeway exit in Los Angeles in 2019

Riad and a woman riding in the Tesla were hospitalized with non-life-threatening injuries, according to KTTV.

A Tesla engineer testified that sensors indicated Riad had a hand on the steering wheel but crash data showed no brakes were applied in the six minutes before the crash.

A police officer testified Thursday that several traffic signs warning motorists to slow down were posted near the end of the freeway.

Tesla has said that Autopilot and a more sophisticated “Full Self-Driving” system cannot drive themselves and that drivers must pay attention and be ready to react at anytime.

The misuse of Autopilot, which can control steering, speed and braking, has occurred on numerous occasions and is the subject of investigations by two federal agencies. 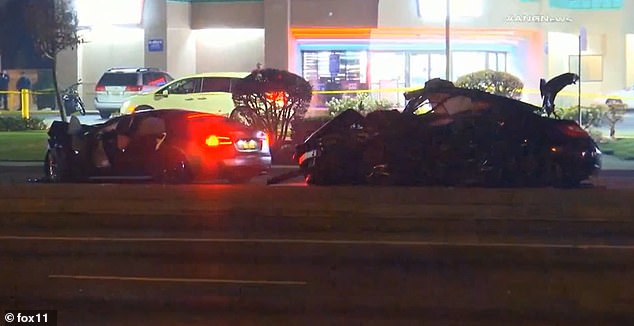 Police said the Tesla Model S left a freeway and ran a red light in Gardena and was doing 74 mph when it smashed into a Honda Civic at an intersection on December 29, 2019

The charges against Riad come after Tesla was removed from the S&P 500 ESG Index in part due to the company’s handling of Autopilot crashes. 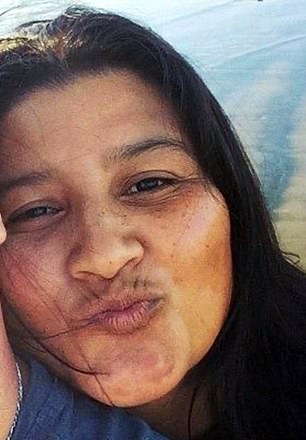 S&P Dow Jones Indices, which maintains the sustainability index, cited investigations into crashes and Tesla’s response in removing the company from the list.

Tesla CEO Elon Musk slammed the move as ‘wacktivism,’ claiming that the index ‘has been weaponized by phony social justice warriors.’

The filing of charges in the California crash could serve notice to drivers who use systems like Autopilot that they cannot rely on them to control vehicles.

The families of Lopez and Nieves-Lopez have sued Tesla and Riad in separate lawsuits.

They have alleged negligence by Riad and have accused Tesla of selling defective vehicles that can accelerate suddenly and that lack an effective automatic emergency braking system. A joint trial is scheduled for mid-2023.

Lopez’s family, in court documents, alleges that the car ‘suddenly and unintentionally accelerated to an excessive, unsafe and uncontrollable speed.’ 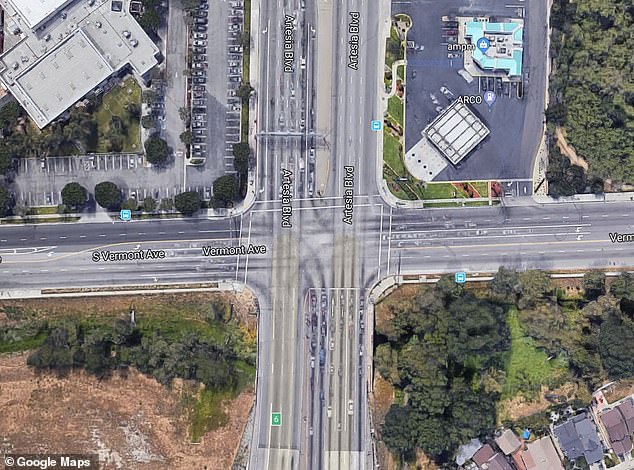 The December 29, 2019 accident happened near the intersection of Artesia Boulevard and Vermont Avenue in the Los Angeles suburb of Gardena

Nieves-Lopez’s family further asserts that Riad was an unsafe driver, with multiple moving infractions on his record, and couldn’t handle the high-performance Tesla.

The criminal charges against Riad aren´t the first involving an automated driving system, but they are the first to involve a widely used driver technology.

Authorities in Arizona filed a charge of negligent homicide in 2020 against a driver Uber had hired to take part in the testing of a fully autonomous vehicle on public roads.

The Uber vehicle, an SUV with the human backup driver on board, struck and killed a pedestrian.

Meanwhile, the National Highway Traffic Safety Administration on Wednesday confirmed that it had sent a special crash investigation team to determine whether a Tesla involved in a May 12 crash in Newport Beach that killed three people was operating on a partially automated driving system.

Autonomous vehicles and driver-assist system have been a source of controversy and concern in recent years.

In January 2018, an unidentified man allowed his Tesla on Autopilot to wander into a fire truck in Culver City, California.

No one was hurt, and he told investigators he was enjoying his coffee and bagel right before the crash.

In March 2018, a woman hired to test an Uber autonomous SUV fatally struck a pedestrian in suburban Phoenix in 2018.

She was charged with negligent homicide, but prosecutors let Uber off the hook.

Police say they have proof that the driver’s phone was streaming The Voice on Hulu at the time.

In December 2019, a man exited a freeway ramp at a high speed in Los Angeles, ran a red light, and hit a Honda Civic, killing both its passengers.

He was charged with two counts of vehicular manslaughter in October 2021.

In April 2021, two men died after their 2019 Model S crashed into a tree and burst into flames near Spring, Texas.

An NTSB report released in October revealed that the driver was actually behind the wheel and wearing his seatbelt at the time of the crash.

In May 2021, Param Sharma, 25, was arrested on misdemeanor charges of reckless driving and disobeying a peace officer after officers noticed his Tesla moving down a California freeway while he sat in the back seat with no one in the driver’s seat.

Dispatchers had gotten calls about a driverless Tesla Model 3 going east on Interstate 80 across the Bay Bridge.

In all, the National Highway Traffic Safety Administration has sent investigation teams to 27 crashes involving Autopilot since 2016, involving at least 11 deaths.

The NHTSA and the National Transportation Safety Board do not release names of victims.

New $750m B-21 Raider shown in different lighting to keep coating a secret from...

Builders use their digger to rescue dog from drowning in an irrigation channel in...