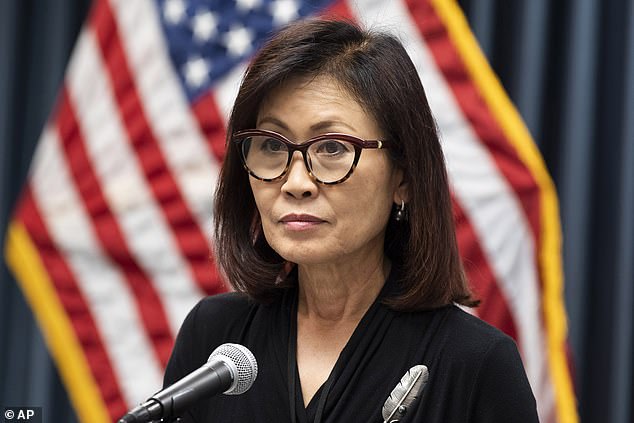 A California Democrat challenging GOP Rep. Michelle Steel is under fire from Republicans for seemingly poking fun at the Korean-American congresswoman’s accent by telling a crowd that ‘you need an interpreter’ to understand her.

While speaking at an April 7 meet and greet in the Congregation B’nai Tzedek synagogue in Fountain Valley, California, Jay Chen was asked by a member of the crowd, ‘if you listen to one of her town hall meetings, she doesn’t speak very well, so is there any way to get her to agree to a debate?’

‘Yeah, so she just had another town hall the other day. And, umm, it’s tough. Like, we’ve transcribed it. You kind of need an interpreter to figure out exactly what she’s saying.’

Chen was referring to a recent telephone town hall that Steel did with constituents, and he had been calling on her to release the footage of it. She released transcripts instead of footage.

‘The more she speaks, the better for us,’ he said, drawing laughter from the crowd. The comments were first reported by Fox News.

Chen went on to say that he would love to get Steel to agree to a debate, but she ‘only has town halls where no real questions get asked.’

A Steel campaign spokesperson called the remarks ‘racist’ and said he ‘owes everyone an explanation.’

The Chen campaign brushed off the racism charge, noting that Chen himself is the child of Taiwanese immigrants, and refused to give any further comment.

‘I’ve dealt with racist attacks my whole life, but it won’t stop me from proudly sharing my voice. My opponent’s attacks are offensive to all immigrants,’ Steel said in a statement on Twitter about the remarks.

‘America is a country built on immigrants,’ the spokesperson told DailyMail.com. ‘Michelle Steel is a first-generation Korean American who speaks English as her third language, and these despicable, racist comments from Jay Chen have absolutely no place in our community. Chen owes everyone an explanation, particularly following recent reports he continues backing the Chinese Communist Party’s Confucius Institutes in our educational system.’

Confucius Institutes and Confucius Classrooms are funded by the Chinese Communist Party and meant as a way to bring Chinese propaganda to U.S. classrooms, according to the U.S. State Department.

Rep. Michelle Steel along with two others were the first Korean American women elected to Congress in 2020 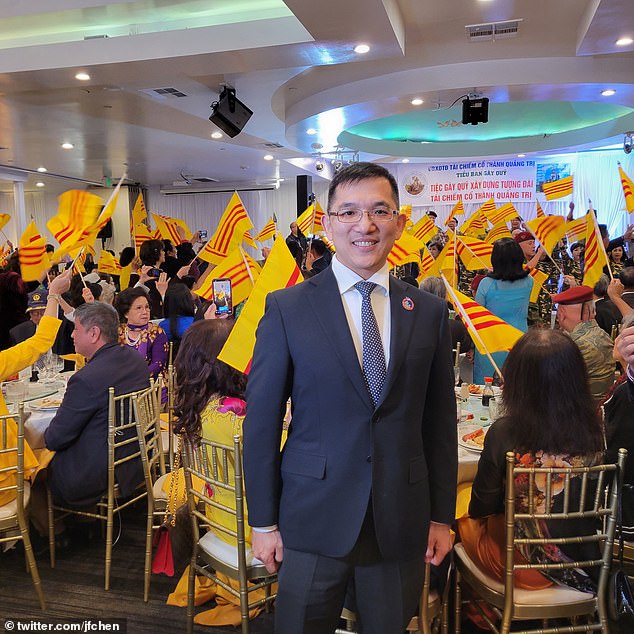 Steel’s opponent Jay Chen has made racist and gendered attacks before, saying Steel is ‘incojerent’ and repeats ‘talking points from her husband’

As a member of the Hacienda La Puente school board in 2010, Chen led an effort to bring the Confucius Classroom to his district. The program, at the expense of the Chinese Ministry of Education, provides American teachers and classrooms with curriculum and materials to teach students about Chinese language and culture.

When Steel went after Chen’s support of the ‘CCP-sponsored schools,’ Chen accused her of ‘anti-Asian racism’ and a contributor to the ‘rise in violent, anti-Asian hate crimes.’

Chen’s jab was not the first time he’s gone after Steel for the way she speaks.

‘We’re running against a frankly very incoherent Republican incumbent in Michelle Steel. The more she talks the better it is for us,’ Chen said on a Zoom call in March.

‘All she does is rely on Republican talking points fed by her husband,’ he said later on.

Steel’s husband Shawn Steel is the former California GOP chairman and is a member of the Republican National Committee.

Chen is part of Democrats’ Red to Blue program, where Democrats choose candidates in Republican districts they believe they can flip to funnel money and support.

‘Will Democrats who’ve endorsed Jay Chen, like Ted Lieu and Adam Schiff, call on Chen to apologize for his xenophobic rhetoric?’ the National Republican Congressional Committee said in a statement on the clip.

House Speaker Kevin McCarthy called for Democrats to immediately take Chen out of the Red to Blue program.

‘The Democratic Congressional Campaign Committee need to immediately disavow and remove Jay Chen from their ‘Red to Blue’ program in light of his racist attack on [Steel],’ McCarthy said in a statement on Twitter. ‘Disgraceful remarks like those uttered by Jay Chen have no place in our nation’s political discourse and the DCCC must act unless they approve of these racist remarks.’

Responding to McCarthy’s remark, DCCC spokesperson Maddy Mundy told DailyMail.com: ‘This is just more gaslighting and deception from the man who has handed over the keys to his caucus to white supremacists and advocates of racist replacement theory.’

Steel was born in South Korea and moved to California for college. English is her third language behind Korean and Japanese. After she was elected in 2020, Steel and Rep. Young Kim, R-Calif., and Rep. Marylin Strickland, D-Wash., became the first Korean American women to serve in Congress.

Coleen Rooney puts on a leggy display in white playsuit as she leaves Ibiza...

Anonymous donor stumped up $175,000 to cover funeral costs for ALL 21 people murdered...