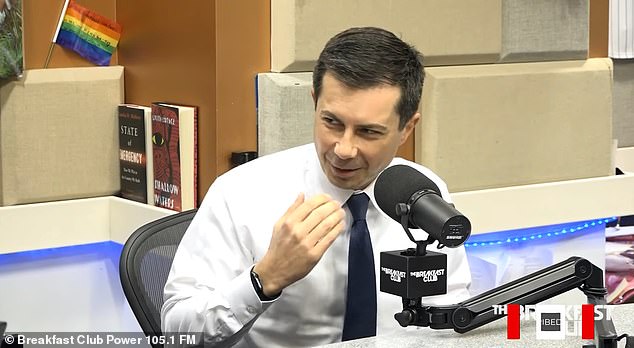 ‘You do realize Pete, a lot of black people feel like Democrats have kept no promises,’ ‘The Breakfast Club’ host told Buttigieg.

‘Look I get it – because the work is not done,’ Buttigieg said. ‘But the reason I say really is we just passed one of the biggest pieces of infrastructure legislation in American history. It was a promise, and it wasn’t just a promise that the Biden-Harris administration made or that Democrats made in 2020, this is a promise that every president and every Congress has made in some way shape or form since I’ve been an adult. we actually did it.’ 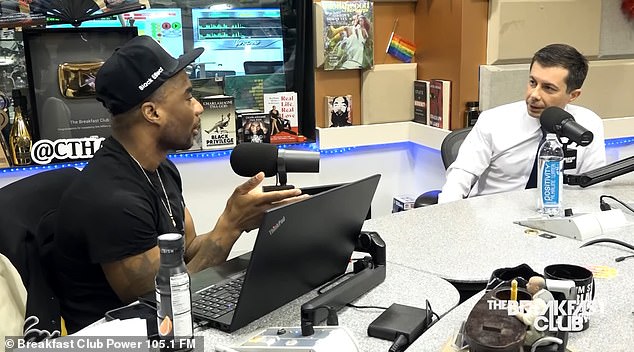 ‘You do realize Pete, a lot of black people feel like Democrats have kept no promises,’ ‘The Breakfast Club’ host Charlamagne Tha God told Buttigieg

‘But those are big, broad things. And that’s great but I’m talking about things you can’t paint on,’ Charlamagne said. He noted that Democrats, who control the House, Senate and White House, failed to pass police reform, the George Floyd Justice in Policing Act, or any sort of voting rights bill.

‘Nineteen states have passed voter suppression bills, you know that’s going to impact us [black people] the most.’

Buttigieg acquiesced: ‘You’re absolutely right that work is not done. That work has to get done and it is not acceptable.’

He laid much of the blame on state governments.

‘In this country a lot of the power and a lot of the decisions are actually at the state level,’ Buttigieg said. ‘What I’ll say is we’re pushing for as much as we can get in terms of results in Congress and taking whatever executive actions are available.’

Charlamagne shot back: ‘It just feels like it takes democrats so long to fix things but Republicans f*** things up quick. They take bold steps to do whatever they want fast and furious but with Democrats it’s like slow. Why? I don’t understand it.’

‘It’s always quicker to break things than it is to fix them or build them,’ Buttigieg said. ‘We’re about building. And yeah that takes time, and that makes us impatient, and that can make us frustrated but that’s what we came here to do.’

MAUREEN CALLAHAN gives her compelling view on the midterms

Everest and Caulfield Cup racegoers party the night away