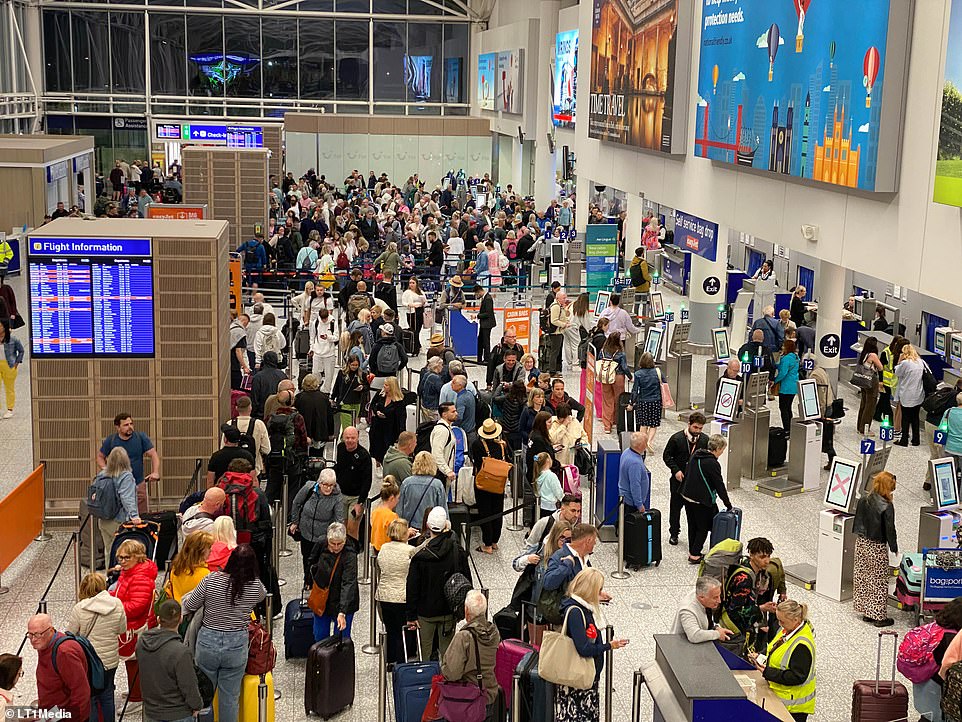 Britons were left trapped abroad or unable to leave the UK today as air passengers continued to face major disruption – with today scheduled to be the busiest day for British airports in three years.

With 2,864 departures from the UK and the same number of inbound flights today as the four-day bank holiday weekend and half-term holidays come to an end, it will be the busiest day for air travel since before the pandemic.

And further queues were seen this morning at airports including Stansted, Manchester, Bristol and Edinburgh after 15,000 people were hit yesterday by last-minute changes. Experts say it will take three days to clear the backlog.

Meanwhile Transport Secretary Grant Shapps has refused to help short-staffed airlines by relaxing visa rules to ease the travel chaos, and also ruled out sending in the Army to ease queues at Britain’s struggling airports.

Thousands of families returning from half-term getaways and bank holiday breaks have been left stranded abroad while others were hit by further delays, with more flights cancelled today by airlines such as easyJet and Wizz Air.

Planes heading for Luton were diverted hundreds of miles away because of a power cut yesterday, and there was also trouble on the trains – with Eurostar passengers left waiting up to eight hours for their trains because of power failure on the line near Paris; while London’s Euston station had to be evacuated after a fire alarm went off.

It capped a nightmare week for British holidaymakers that saw understaffed airlines cancel hundreds of flights at the last minute, leading to police having to deal with the angry scenes in overcrowded departure lounges. 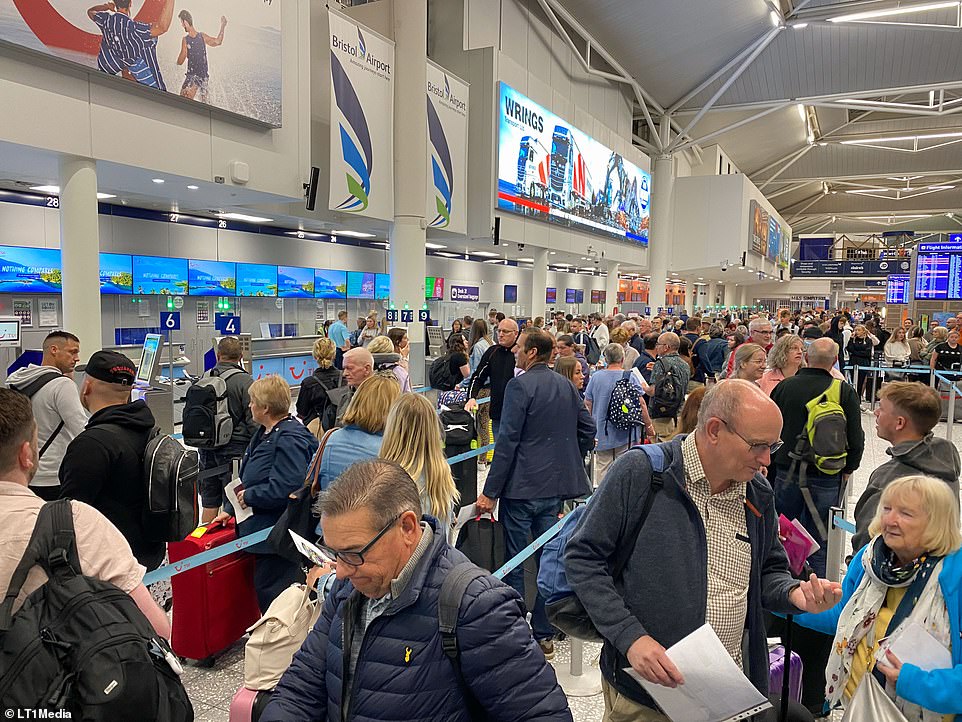 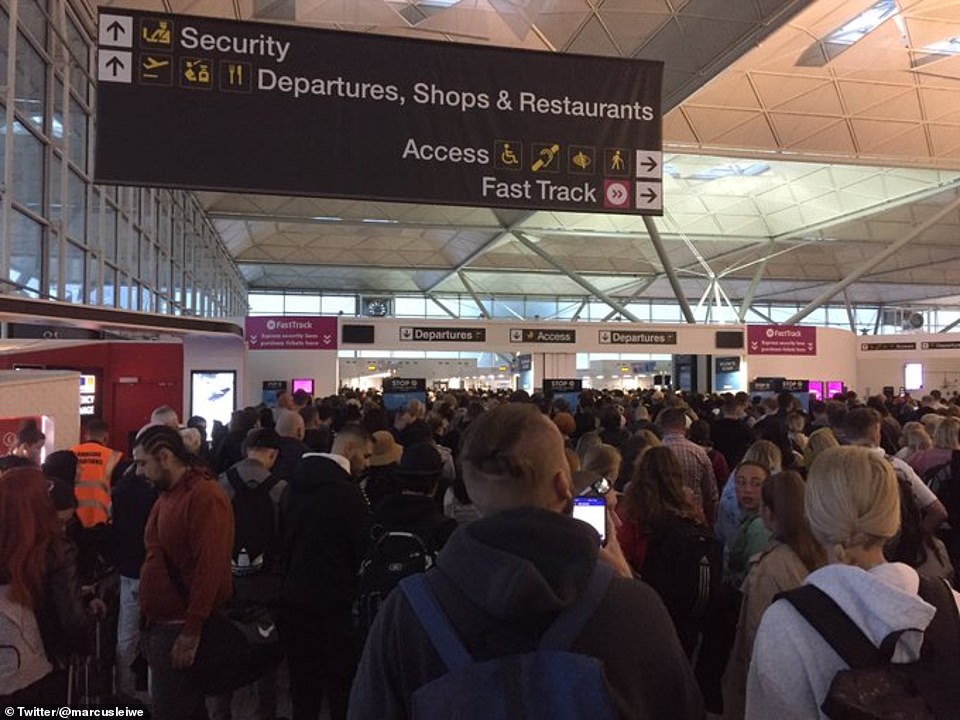 STANSTED AIRPORT:  A passenger waiting at London Stansted this morning said the flight queues there are ‘like no other’

But the Government is resisting calls to step in and help the aviation industry, which has been accused of laying off too many staff during the pandemic then selling too many seats when Covid travel restrictions were lifted.

Among those stranded abroad are ‘Kelly’ from Lincoln and her husband, who are both teachers. They are at Dubrovnik bus station, having travelled there from Montenegro after their easyJet flight to Gatwick was cancelled.

A couple whose easyJet flight from Berlin to London Luton last night was cancelled decided to borrow a relative’s German car and drive through the night to get to work by lunchtime today.

Clare, 49, and Christian Engelke, 56, were told in a text message yesterday lunchtime that their 10.55pm flight had been cancelled, and there were no alternative flights available until Wednesday. 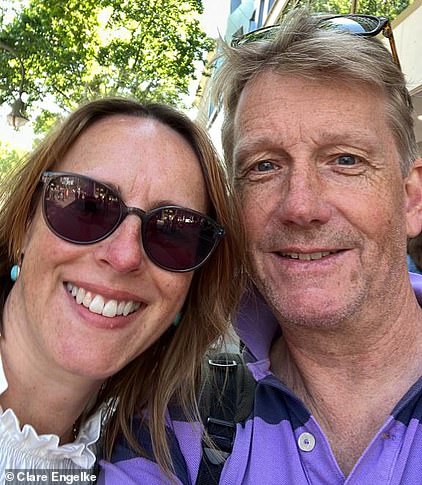 Clare and Christian Engelke, pictured on holiday in Berlin

The couple, who are from the Staffordshire village of Codsall, spent the next few hours unsuccessful trying to find alternative flights or train journeys.

They gave up at 4pm and their friends said they could drive them three hours from Berlin to Saltzgitter, where they picked up another car from relatives.

The Engelkes then drove through the night across the continent to the Eurotunnel in Calais so they could get back home for work today.

They said they had to spend £180 on fuel and £178 on the Eurotunnel, and also then had to pick up their car at Luton today after paying £10 to extend the parking.

In addition, the couple now have a German car in England that they will have to take back.

Mrs Engelke told MailOnline today: ‘The staggering thing we learnt was how few flights are available between the capital city of Germany and the UK.

‘We are lucky we have mobile phones and used our initiative to call on lovely friends who we met in Berlin – seeing them for the first time in three years due to the pandemic – and family in Germany who have lent us a car to get us home. We now have a German car in England that we have to take back eventually.’

She added at 9am that they were ‘making good progress now on the M1 so hope to be sitting at our desks by lunchtime’.

She told BBC Radio 4’s Today programme this morning: ‘We’ve obviously had lots of disruption, but today we’re on our way to the bus station for our third bus journey. We’re off to Split to hopefully catch our plane tomorrow.

‘We’ve just been very disappointed in easyJet because they took eight hours to find our accommodation for us, so we were sat in a bus station last night for four hours and left at 8.30pm, so just feel that they’ve not really helped us to find our onward journey. We’ve had to do it all ourselves.

‘We found out (that the flight had been cancelled yesterday) at 8am. I just looked on the app and it said ‘cancelled’. So I just started phoning at 8am and they told us that we could have a flight on Thursday, but obviously we’re teachers so we’re very keen to get back to school so there’s less disruption for the children and the teachers that are going to have to cover us.’

She said they would have taken a total of three bus journeys lasting 12 hours and were having to travel to Bristol Airport instead of Gatwick, so would then have to travel onto Gatwick before heading home to Lincoln.

Meanwhile Matt Wheeler, 37, a train driver from Nottingham, said he and his partner had to make emergency childcare arrangements after finding out their easyJet flight home from Amsterdam had been cancelled this morning.

‘It’s a farce… didn’t know about the cancellation until we arrived at the airport at 3.30am, no easyJet staff or any staff that could help us,’ Mr Wheeler said.

‘We now have to try and arrange family members to pick our kids up from school/childminders this afternoon and then have them overnight and take them to school tomorrow.

‘They’ll have to take time off work (and) we will now miss a day’s work tomorrow as we won’t be home.’

Mr Shapps was asked yesterday if he would temporarily relax post-Brexit rules to allow more foreign workers in to the country, as happened last year when a shortage of lorry drivers left supermarket shelves and petrol pumps empty.

He told the BBC’s Sunday Morning programme yesterday: ‘The answer can’t always be to reach for the lever marked ‘more immigration’. There is not some pull that is going to relieve this.’

The Transport Secretary said the 2016 Brexit referendum result meant and end to hiring ‘cheap labour from somewhere else’.

‘I didn’t vote for Brexit but the country did and we’ve made our choice – we want a high-wage, high-skilled economy,’ he said. ‘That means the aviation sector, like all other sectors, and as the HGV, the lorry driving sector has now done, needs to change.’

Mr Shapps also rejected calls for the Army to be drafted in. ‘The Army is not a snap solution to every problem. Secondly they are being deployed in increasing numbers to eastern Europe, to the Baltics, in what is a war situation and that’s what the Army are principally there for,’ he said.

‘The airports and airlines will need to sort out this problem. The Government will give them every support, but I don’t anticipate that will include calling in the Army.’

He said he would work with the industry to prevent summer holidays from being ruined, and also to ensure that air passengers who do lose out are given automatic compensation as rail travellers are.

‘It can’t be acceptable that it is so complicated sometimes to get a flight rearranged or to get your money back,’ Mr Shapps said.

‘I want it to be more like Delay Repay works on trains, where it is an automated process.’

Among those calling for visa rules to be relaxed was London Mayor Sadiq Khan. 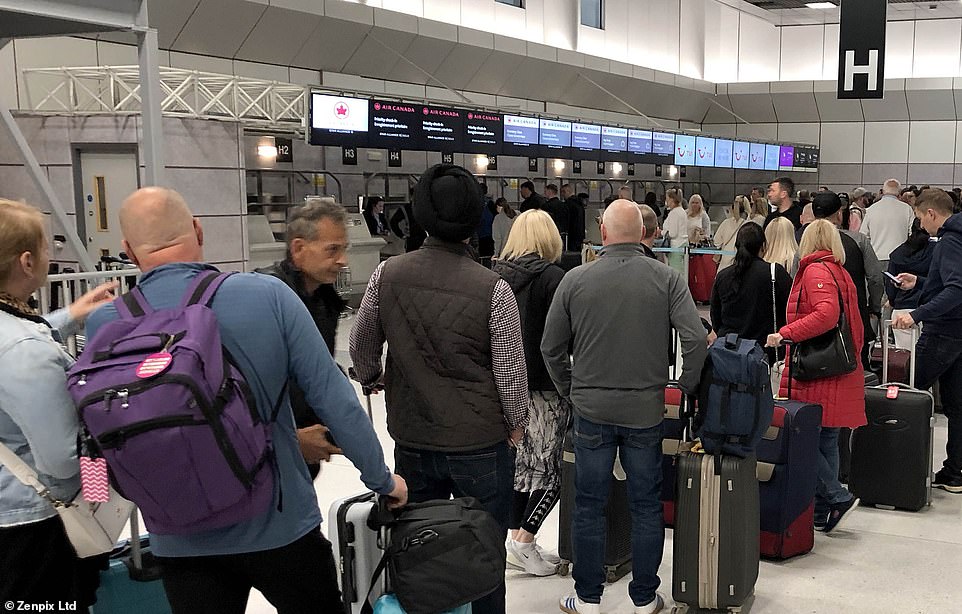 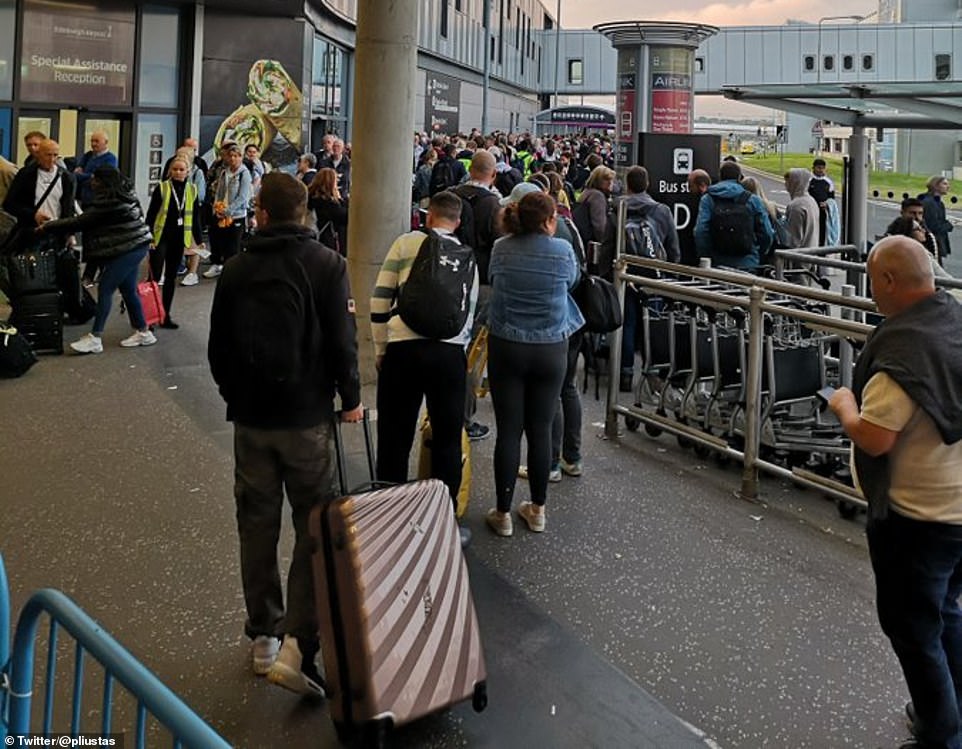 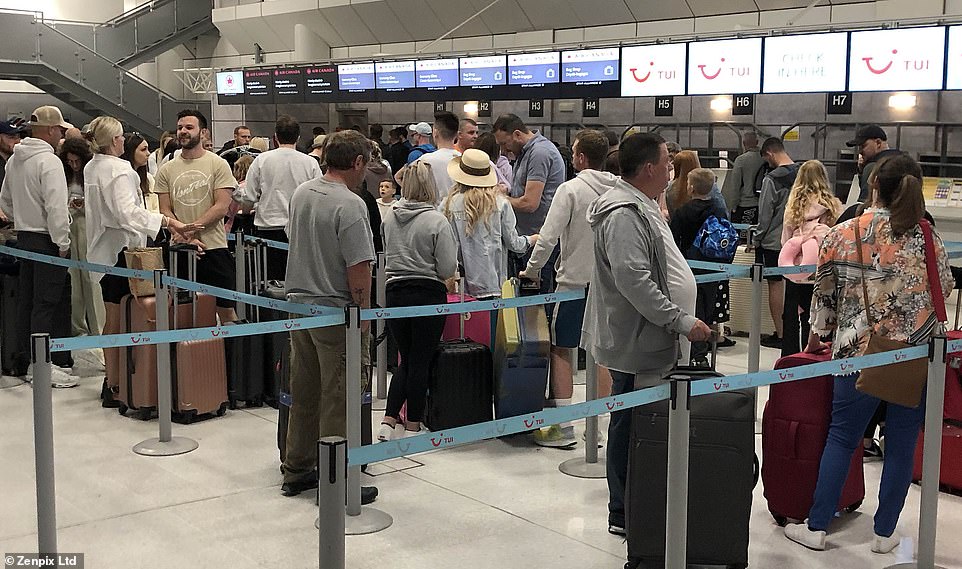 He told the BBC: ‘What you can do very easily is make sure those who were in those jobs before, who have gone back to their country of origin, from the EU, are encouraged to come back.

‘Because what we don’t want is a spring misery turned into a summer misery.

‘Many families who have saved, who have paid for a holiday and are looking forward to a holiday are going to be let down.’

His demand came as easyJet said it had cancelled 80 flights yesterday ‘due to the ongoing challenging operating environment’.

Gatwick was badly hit with more than 40 incoming flights cancelled from BA and Wizz Air as well as easyJet.

And thousands of passengers due to head home to Luton were left stranded overseas or diverted after a power cut early in the morning.

A spokesman for Luton Airport said: ‘Following a power failure in the area this morning, a temporary loss of navigational aids at the airport resulted in some disruption to flights.’

A similar problem with the overhead power supply near Paris halted Eurostar services for much of the day, with the cross-Channel rail operator ‘strongly urging’ passengers to postpone their journeys as early trains were delayed and later ones cancelled.

On social media, travellers stuck in France told how they had been left waiting at the Gare du Nord in Paris for as long as eight hours.

While some were eventually allowed to board delayed trains, others whose trains were cancelled were told they may not be able to get replacement services until tomorrow.

Some 225 departures from UK airports were cancelled between Monday and Friday last week, according to aviation data firm Cirium.

That compares with 24 during the corresponding half-term week last year.

Travel consultancy The PC Agency estimated that at least 15,000 passengers were affected by ‘last-minute changes’ to flights on Sunday.

Chief executive Paul Charles said this caused ‘major knock-on effects’ and ‘it will take three days to clear the backlog’.

UK airline passengers have been hit by disruption for several months due to a lack of staff after letting thousands of people go during the coronavirus pandemic. 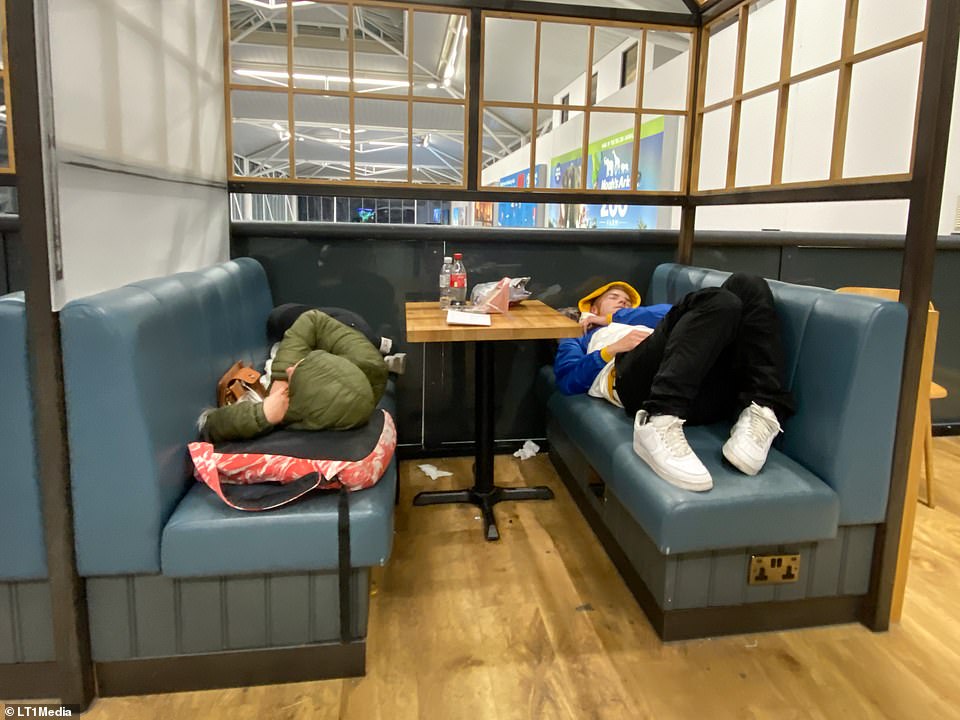 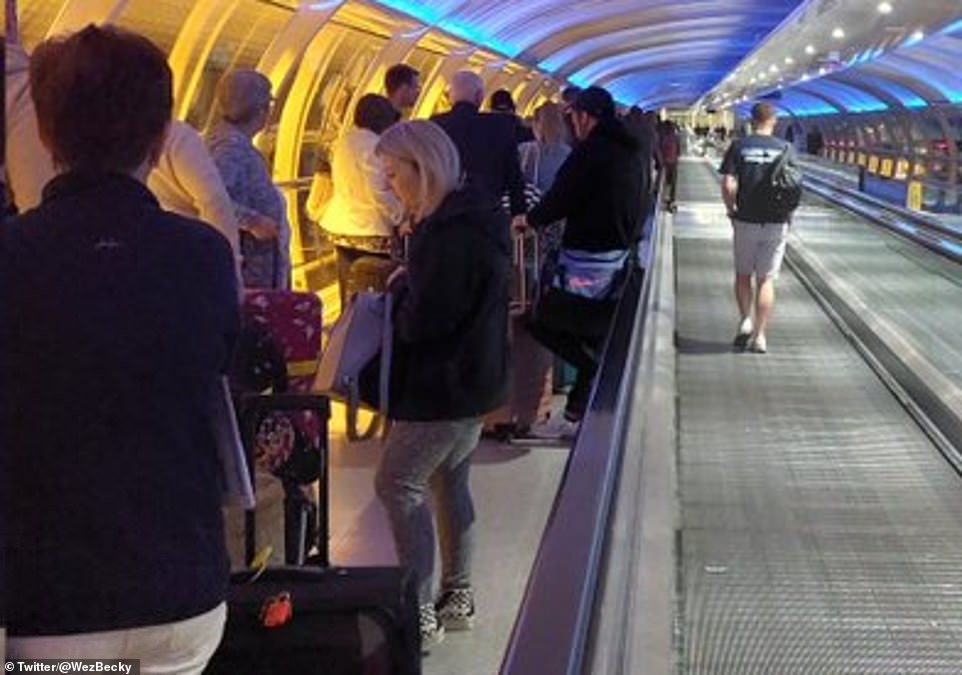 MANCHESTER AIRPORT: Passengers wait in line at Manchester Airport this morning as the airport disruption continues 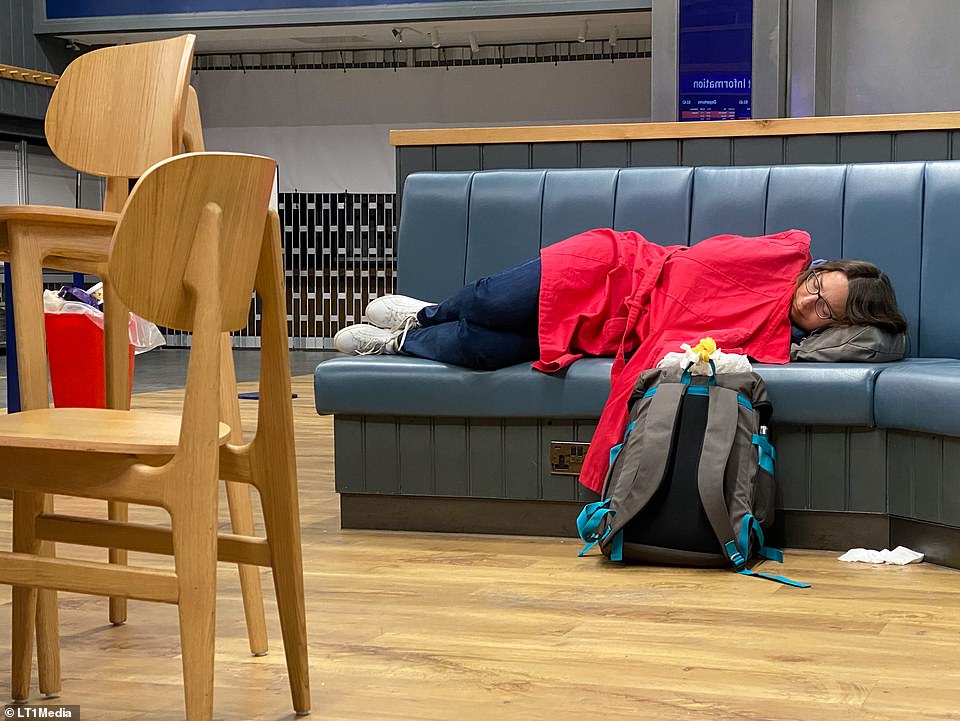 BRISTOL AIRPORT: A passengers sleeps on a bench at Bristol Airport this morning as the airline disruption continues

They are now struggling to recruit new staff and have their security checks processed.

Lisa Webb, a law expert at consumer rights group Which?, said airlines needed to ‘follow the rules when flights are disrupted’ following a ‘hellish week’ for travellers.

‘The shameful scenes at UK airports this half-term are the result of an industry in which some airlines feel they can get away with ignoring consumer rights and acting with near impunity,’ she said.

‘It is clear that passenger rights need to be strengthened, so the Government must drop plans to cut compensation for delayed and cancelled flights and the Civil Aviation Authority must be given the power to issue direct fines so it can hold airlines to account when they flout the law.’

Transport for London is advising people to avoid travelling on the network with many stations either forced to close or only open for limit hours.

The industrial action by the RMT union, called over plans for 600 job losses, is likely to lead to congestion on other routes such as buses and overground rail services.

** Are you stuck abroad or struggling to fly out of Britain? Please email: mark.duell@mailonline.co.uk **

Girl, 11, survived Texas school massacre by smearing friend’s blood on herself to appear...