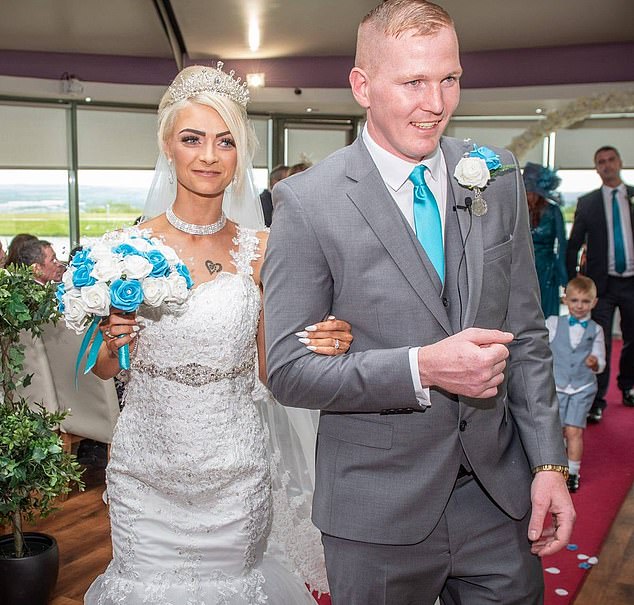 A bridezilla who attacked her own mother with a stiletto when a brawl erupted at her wedding reception has been cut out of the family will, it emerged today.

Claire Goodbrand, 26, pleaded guilty to assault this week after the incredible bust up in which she seized her mother Cherry-Ann Lindsay, 47, by the hair before putting her hands around her throat – leaving the grandmother fearing for her life.

Her new husband Eamonn Goodbrand and the best man, Goodbrand’s brother, were also involved in the fight, sparked by a row following a day of heavy drinking at the The Vu wedding venue at Ballencrieff Toll, Bathgate, West Lothian in June 2019.

Ms Lindsay revealed today that she has since ‘disinherited’ her mother-of-four daughter, ensuring ‘she’ll get nothing’ of what she leaves behind – including two properties and a caravan.

She told the Scottish Sun that the men were slurring their words during their speeches.

‘When Eamonn finished he said to me, “Thanks, Mum, for the money”. That’s all they care about,’ she said.

Claire and Eamonn Goodbrand were all smiles at The Vu wedding venue at Ballencrieff Toll, Bathgate, in West Lothian, before a fight broke out on the waterfront lawn 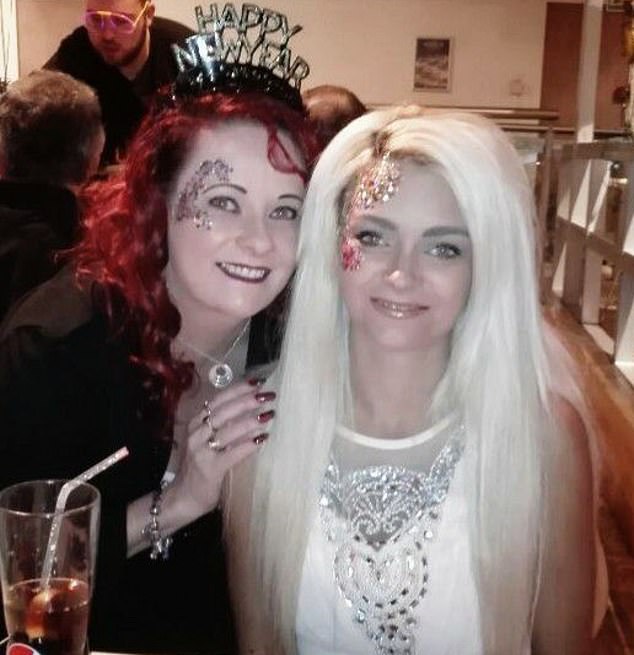 Claire Goodbrand (right), 26, pictured with her mother Cherry-Ann Lindsay, 47, who she attacked at her wedding in June 2019

‘I started getting panicky. My daughter’s an only child. I had two properties, a caravan and life insurance. Everything goes to her.’

Ms Lindsay said she was worried that ‘they thought they would get everything’ if something happened to her.

She added: ‘After the wedding I changed all the paperwork and disinherited her so she’ll get nothing.’

Ms Lindsay added that she had also been to court to evict her daughter and Eamonn from a property she let them stay in before they tied the knot.

MailOnline revealed yesterday how despite taking Eamonn’s name, the couple have been living in separate homes in recent months – though are understood to still see each other.

The Goodbrands are now said to be living apart at two addresses in Glasgow.

After being approached Mr Goodbrand repeatedly told a reporter to ‘leave’.

At the separate address a few miles away where she is living, Mrs Goodbrand refused to answer the door.

A neighbour said: ‘They don’t live together no. They’re at separate addresses a few miles apart and have been for a while. But they do still visit each other so it’s not clear what the state of the relationship is.’

The 33-year-old groom — a former professional boxer — and his brother Kieran, the best man, joined the brawl after Claire attacked her mother and assaulted Ms Linday’s partner, David Boyd, 40. 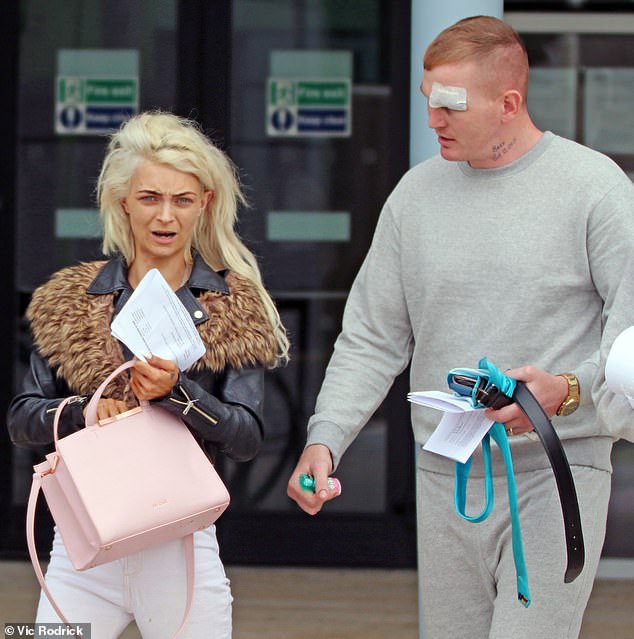 The newly married couple as they were released from custody in 2019, having spent their wedding night in separate cells. The fight had spilled out onto the waterfront lawn at their West Lothian venue

The brothers punched and kicked Mr Boyd, pushed their thumbs into his eyes, bit him and grabbed him by the neck.

Pictures from the day show the loved-up couple beaming on the dance floor and posing by the water before the violence broke out.

CCTV footage at The Vu wedding venue at Ballencrieff Toll, Bathgate, in West Lothian reportedly captured the fight spilling out onto the waterfront lawn after the couple tied the knot in June 2019.

Police were called and the bride, groom and best man, all from Uddingston, Lanarkshire, were arrested and held in custody.

Earlier this week, the couple as well as their best man all pleaded guilty to assault and injury charges at court.

She admitted repeatedly seizing her mother by the hair and punching and kicking her on the head and body, causing her to fall to the ground and strike her head.

She also admitted punching and kicking her mother to the head and body while she was on the ground, striking her on the head with a shoe and seizing her by the neck and restricting her breathing. 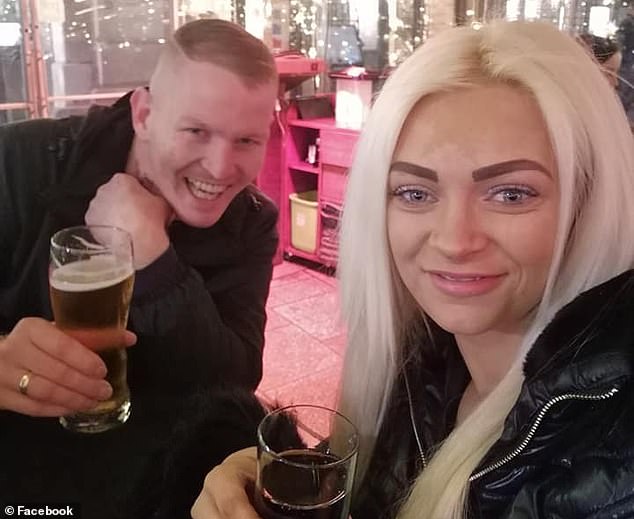 Eammon Goodbrand assaulted his mother-in-law’s partner, and Claire assaulted her mother at the wedding reception in 2019. Pictured together on social media 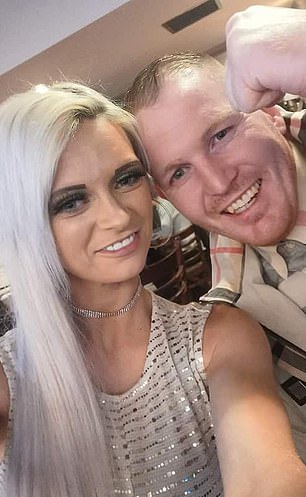 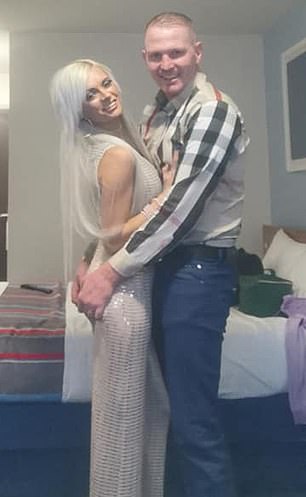 The charge states that they caused him to fall to the ground and continued their attack as he lay there.

They admitted pushing their thumbs into Mr Boyd’s eyes, biting him on the head and body and repeatedly seizing him by the neck and restricting his breathing, all to his severe injury.

Kieran Goodbrand also admitted assaulting Mr Brown to injury, by punching and kicking him on the head and body.

Sheriff Martin Edington called for criminal justice social work reports on the three and adjourned the case until April 29.

A fourth member of the Goodbrand family, Brendan, 37, pleaded not guilty to two assault charges. These were accepted by the Crown as he had left the venue before the fights started.

The newly married couple had spent their 2019 wedding night in separate cells. 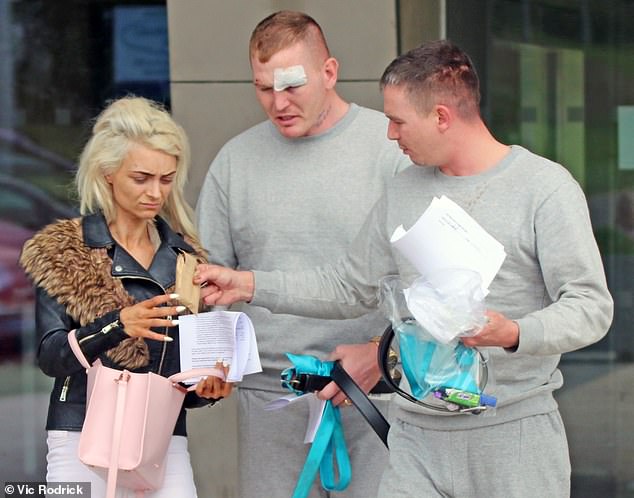 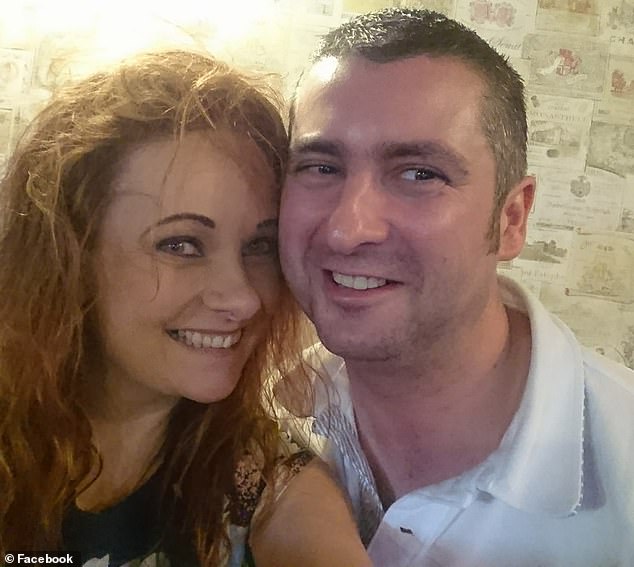 Cherry-Ann Lindsay with partner David Boyd, who was attacked by the groom and best man. They punched and kicked him, pushed their thumbs into his eyes, bit him and grabbed him by the neck. Pictured together on social media

When they were released from custody, the bride was wearing what appeared to be her going-away outfit.

The groom and best man were dressed in prison-issue tracksuits — still wearing their mud-stained wedding shoes, and holding their blue ties.

Professional boxer Eammon Goodbrand, 33, had a plaster on a head injury when he was freed.

His 26-year-old wife was clutching a pink handbag.

Ms Lindsay said that the wedding day felt like ‘a sick joke’, with her bride daughter ‘swearing like a banshee’ and the boys ‘drinking beer and falling over each other’.

She sensed that there was ‘trouble brewing’ at the wedding, but did not expect it to escalate.

Ms Lindsay — a self-employed IT finance consultant — said that she is now living at an undisclosed address and does not want to see them.

‘I’ve moved away and I don’t want them to know where I am now,’ she said.

What do freckles mean? Thousands of women have an identical freckle on their wrist