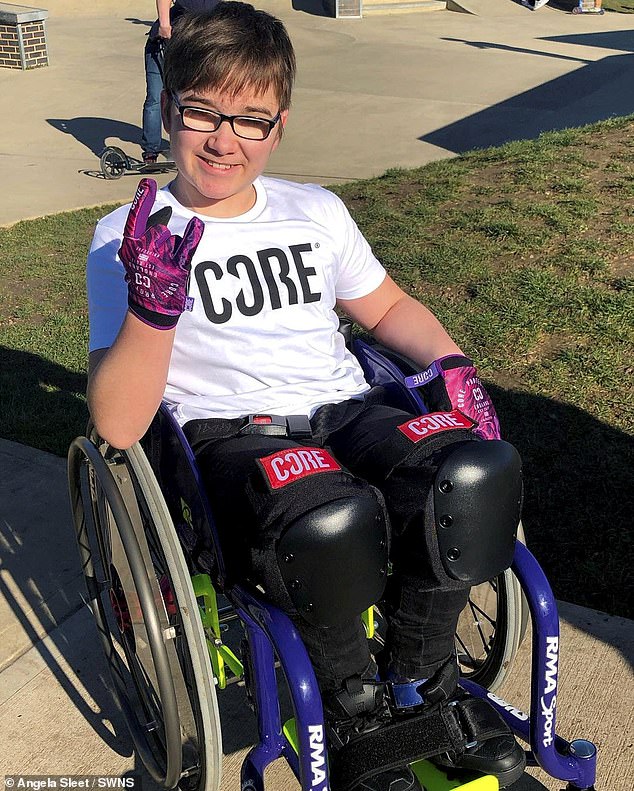 This is the moment a 12-year-old boy became the first male in the UK to perform a backflip in a wheelchair.

Benjamin Sleet was born with spina bifida and hydrocephalus, a build up of fluid in the brain, and has always required the use of a wheelchair to get around.

He was first introduced to wheelchair motor cross (WCMX) at a skateboard event aged eight, but his skills began to take off when he obtained a specialist skate chair.

After a few months of practice and repeated attempts using a foam pit, Benjamin landed a backflip at a skate park earlier this month.

In doing so, he became the youngest ever Brit, and first male, to pull off the acrobatic manoeuvre.

Ben, from Henley-on-Thames, Oxfordshire, said: ‘I was shocked at first and then I felt excited – it wasn’t really scary.

Benjamin Sleet, from Henley-on-Thames, Oxfordshire, pulled off the incredible feat earlier this month 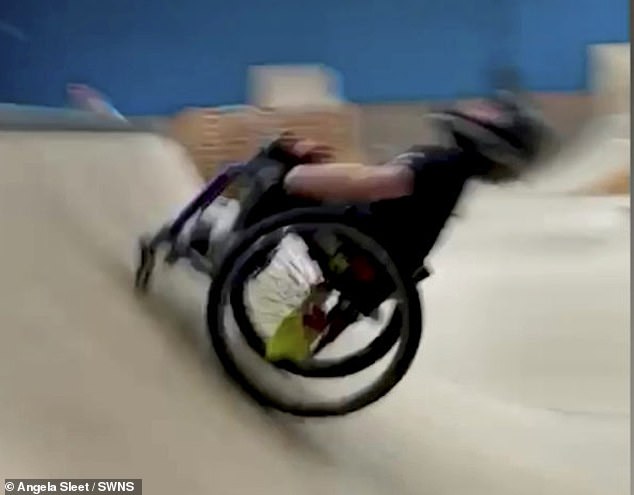 After months of practice using a foam pit, Ben took to a skate park to attempt the feat in his wheelchair 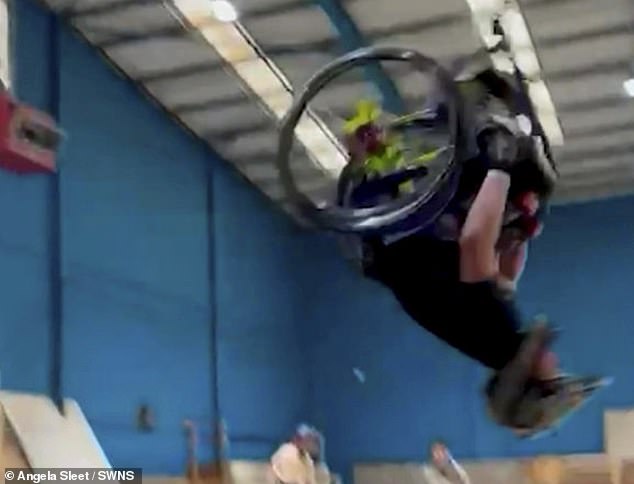 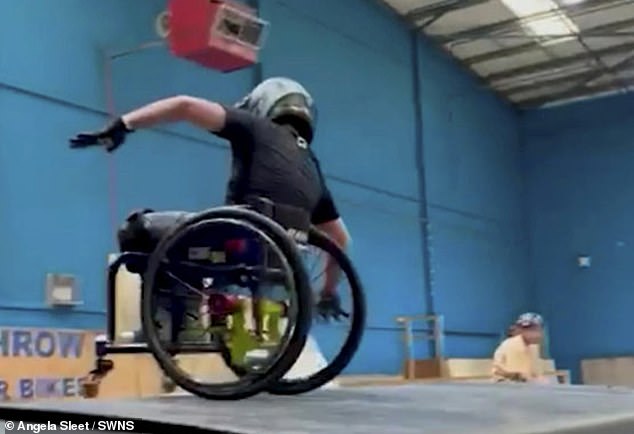 The moment Ben landed the backflip, becoming the first and male and youngest person to do so in the UK

‘I had a couple of friends there and they were excited for me – I’ve wanted to do it for about a year.

‘You need loads of speed to be able to flip yourself over – start quite high and go over the edge and push down.’

Ben was introduced to WCMX by skateboarder Richie Inskip at a jam event.

Richie in turn introduced him to Lily Rice, the current women’s world WCMX champion who became the first female in the UK to pull off a backflip aged 13.

She brought along a specially adapted skate chair to allow Ben to try the sport – he has not looked back since.

After receiving a £5,500 donation, Ben’s family were able to purchase his own specialised wheelchair to allow him to continue honing his WCMX skills.

He landed the backflip on April 2.

He has now set his sights on a sponsorship deal that will help him rise up through the sport.

His mother Angela, 46, said: ‘He’s been doing the sport for four or five years now and was only 12 in November – he’s the youngest male in Europe and only male in the UK to have landed a wheelchair backflip.

‘We met Richie Inskip and he stood Ben up on his skateboard and took him around the skatepark.

‘He suggested Ben bring his wheelchair to the skatepark so we did – Ben kept falling but he would get up and ride the ramps again. 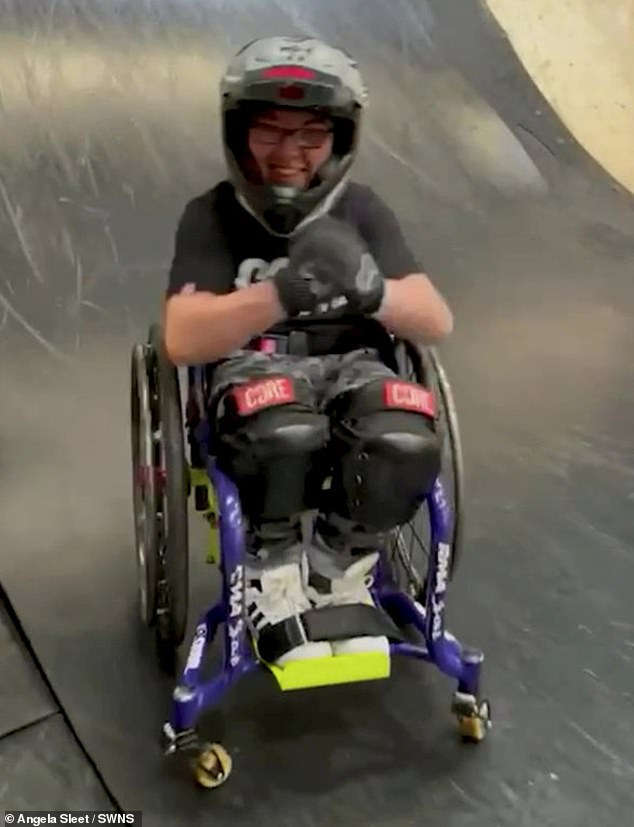 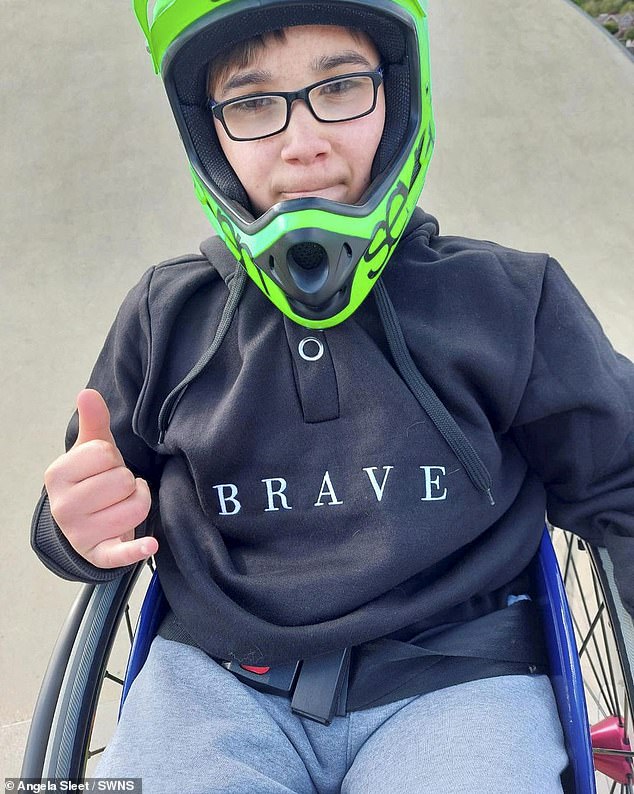 ‘Richie introduced us to Lily Rice who came out to see us and bought her chair along – Ben had a go and absolutely loved it. We received a generous £5,500 donation which allowed us to get him his fist skate chair.

‘He’s recently outgrown that one, so we sold it and used the funds to get him another one. He’s just been getting better and better – I didn’t know he was going to try the backflip and was terrified when I saw him do it!

‘We did an online competition run from California where he had to do a run at his normal skatepark, film it and send it in. He came first and received a medal through the post.

‘He also took part in the World Championships in Germany in 2019 and came fourth in his division. Now, we’re looking for sponsorship as it’s hard to travel without the money.

‘We just want to get the word out there about what he’s doing and get some more support – there’s a competition coming up in Germany in July and we’d really like to go.’