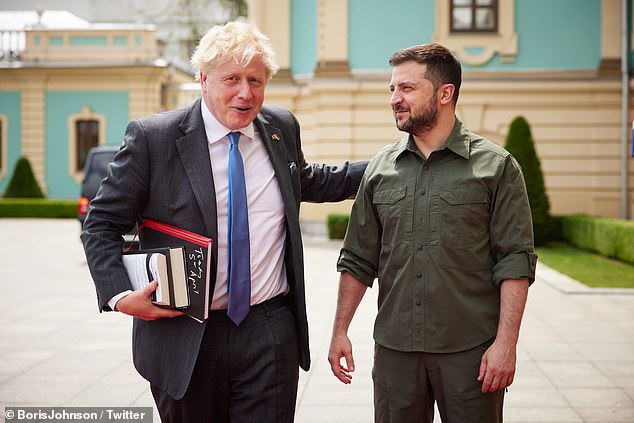 Boris Johnson has made a surprise visit to Kyiv today – the day after Emmanuel Macron and EU leaders visited Ukraine for the first time – pledging to stand with Volodymyr Zelensky against Russia.

The Prime Minister was pictured in a warm embrace with Zelensky, who greeted him by his first name and appeared visibly happier compared to his awkward meeting with Macron earlier this week.

It is the second visit Mr Johnson has made to the Ukrainian capital since since Vladimir Putin invaded, following a day of mystery regarding his whereabouts.

Tweeting a picture greeting the Ukrainian president this afternoon, Mr Johnson said: ‘Mr President, Volodymyr, It is good to be in Kyiv again.’

A message on Mr Zelensky’s Telegram account also read: ‘Many days of this war have proved that Great Britain’s support for Ukraine is firm and resolute. Glad to see our country’s great friend Boris Johnson in Kyiv again.’

A video released by the Ukrainian government also showed Mr Zelensky warmly greeting the PM with a ‘hi, Boris’ as he arrived at the presidential palace.

The two leaders then walked up a set of stairs while conversing before posing for pictures and walking into a meeting room.

Mr Johnson told the Ukrainian president that the UK is prepared to launch a major operation to train Ukrainian armed forces, training up to 120,000 troops every 120 days.

Downing Street said the British-led scheme would train and drill Ukrainian troops to accelerate their deployment, rebuild their forces and increase their resistance.

In a statement, the PM added: ‘My visit today, in the depths of this war, is to send a clear and simple message to the Ukrainian people: the UK is with you, and we will be with you until you ultimately prevail,” Mr Johnson said in a statement.

‘As Ukrainian soldiers fire UK missiles in defence of your nation’s sovereignty, they do so also in defence of the very freedoms we take for granted.

‘That is why I have offered president Zelensky a major new military training programme that could change the equation of this war – harnessing that most powerful of forces, the Ukrainian determination to win.

‘Two months on from my last visit, the Ukrainian grit, determination and resilience is stronger than ever, and I know that unbreakable resolve will long outlive the vain ambitions of president Putin.’ 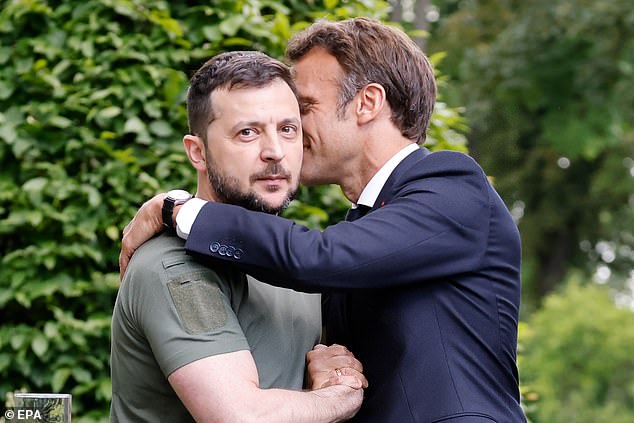 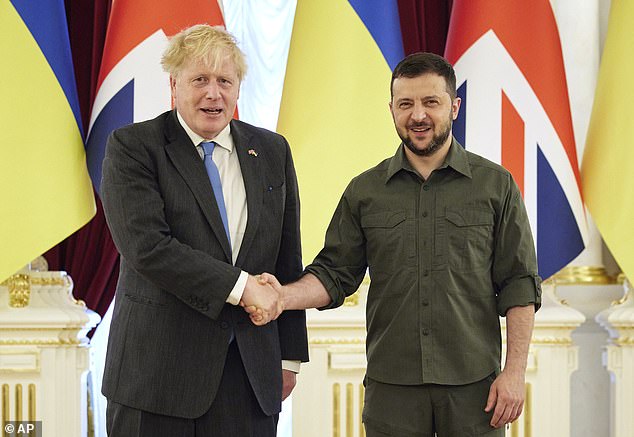 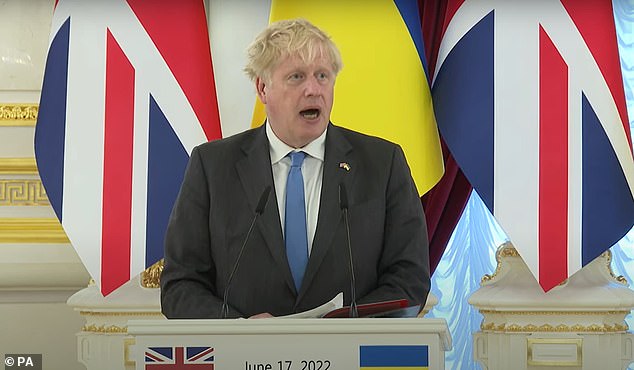 Mr Johnson told the Ukrainian president that the UK is prepared to launch a major operation to train Ukrainian armed forces, training up to 120,000 troops every 120 days 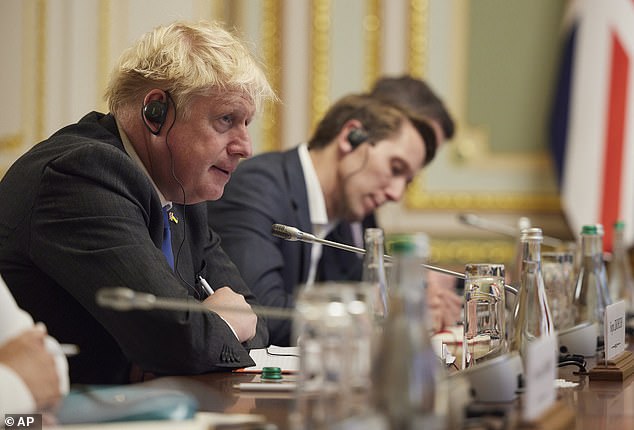 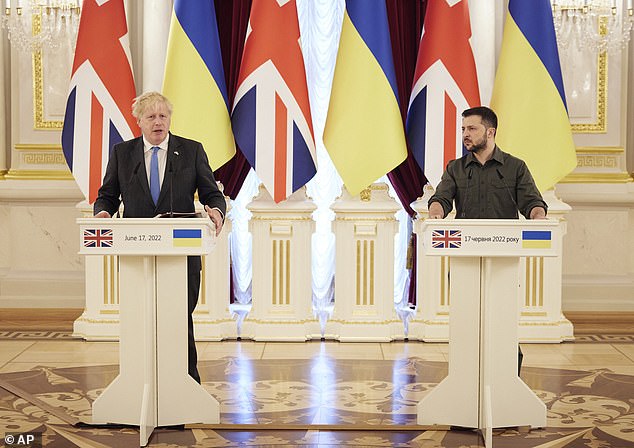 Downing Street said the British-led scheme would train and drill Ukrainian troops to accelerate their deployment, rebuild their forces and increase their resistance 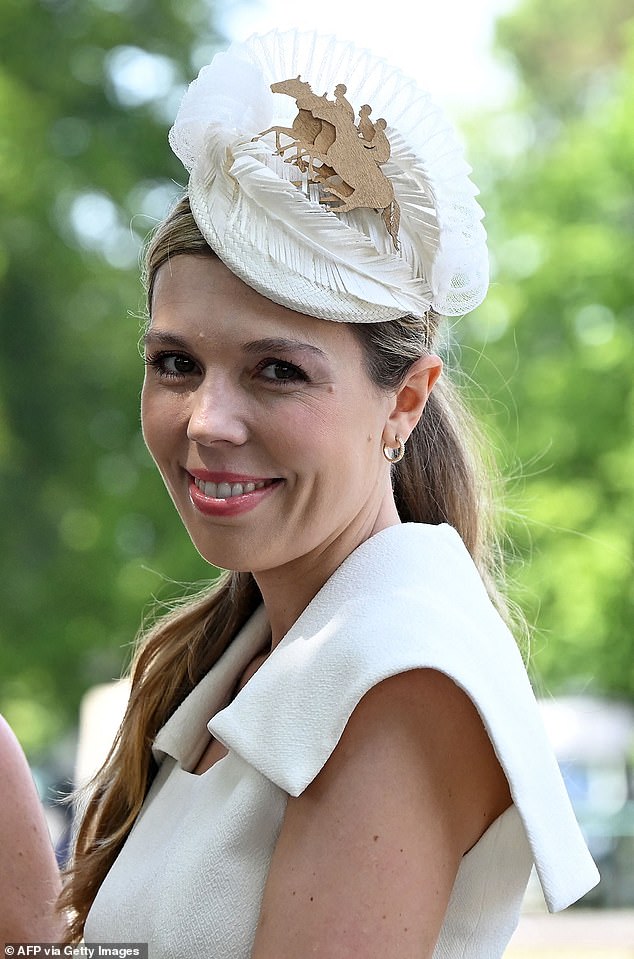 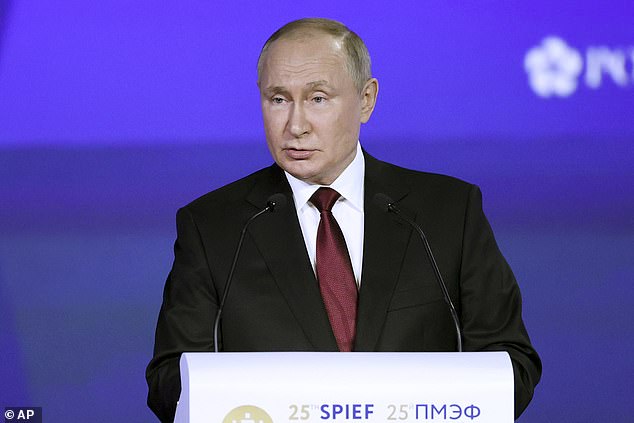 At a press conference, Mr Johnson also paid tribute to the Ukrainain forces as he again pledged Britain’s support in their fight to drive out the Russian invaders.

He said: ‘If Ukrainian troops are suffering then I have to tell you all the evidence is that Putin’s troops are under acute pressure themselves and they are taking heavy casualties,’ he said.

‘Their expenditure of munitions – of shells and other weaponry – is colossal. After 114 days of attack on Ukraine, they have still not achieved the objectives they set out for the first week.

‘We are here once again to underline that we are with you to give you the strategic endurance that you will need and we are going to help to continue to intensify the sanctions on Putin’s regime.’

He also said he understands why the Ukrainians were not prepared to compromise in the face of Russia’s ‘barbaric’ aggression.

‘We continue to see the deliberate targeting of civilians in what is unquestionably a war crime and, in a hideous echo of the past, the illegal deportation of people the Russian forces believe to be insufficiently sympathetic to Putin’s aggression.

“‘n those circumstances, I completely understand why you and your people can make no compromise with Putin.’

The PM continued: ‘We will continue, as we have from the beginning, to provide the military equipment you need – and now, of course, the training that may be necessary to go with that new equipment – so that you, the Ukrainian people, the Ukrainian armed forces, will be able to do what I believe Ukrainians yearn to do, and that is to expel the aggressor from Ukraine.

‘That will be the moment for talks about the future of Ukraine and it will be in that context of a free Ukraine that we and other countries will be making the security commitments and guarantees we have discussed so often.’

It comes after the PM had been slated to appear at a conference being held by the Northern Research Group of Red Wall Tory MPs in Doncaster this afternoon.

He was also expected to campaign in Wakefield ahead of the crucial by-election next week. The Conservatives fear they are doomed to lose the seat to Labour after a torrid spell that has seen Mr Johnson fined over Partygate and most recently the resignation of his ethics adviser.

However, he pulled out of the event abruptly last night, causing particular anger among the MPs by not giving any reason.

In April, Mr Johnson became the first Western leader to go to Kyiv, with the arrangements made in great secrecy.

He has formed a close ‘bromance’ with Mr Zelensky, speaking regularly on the phone.

The Ukrainian president’s head of office described Mr Johnson as a ‘good friend and ally’ during the visit.

Andriy Yermak tweeted: ‘Today, together with Volodymyr Zelensky, the Office and Government team, we met with our good friend and ally, Boris Johnson. 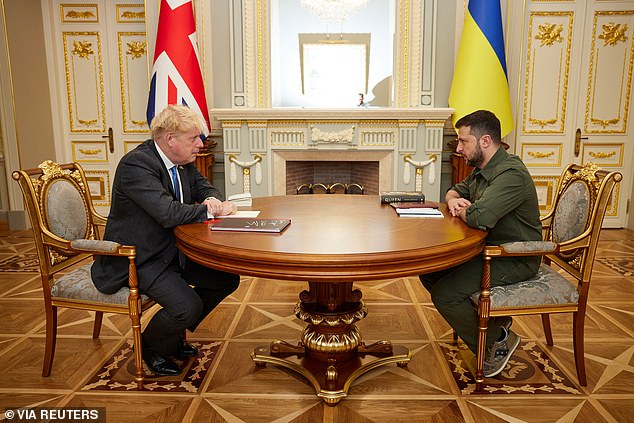 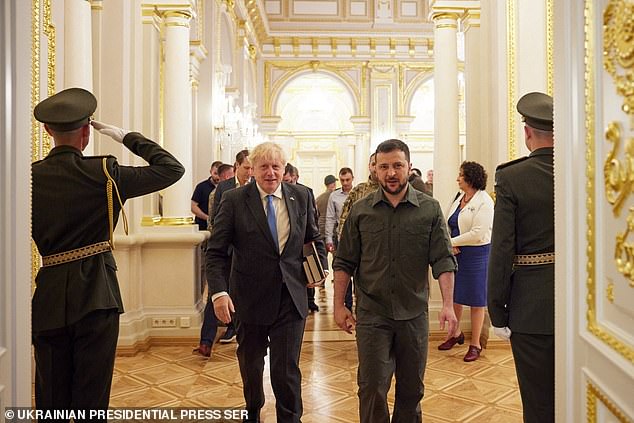 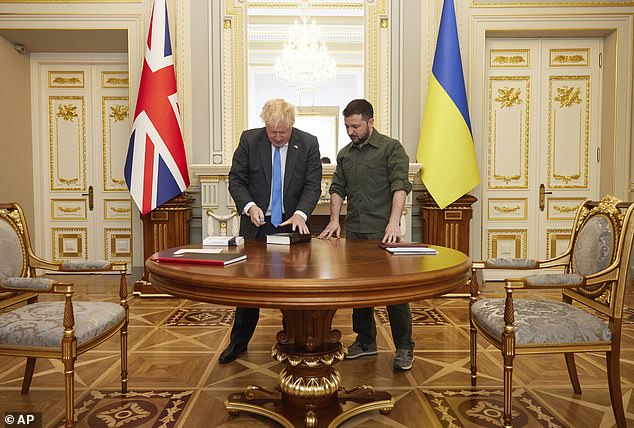 At a press conference, Mr Johnson also paid tribute to the Ukrainain forces as he again pledged Britain’s support in their fight to drive out the Russian invaders 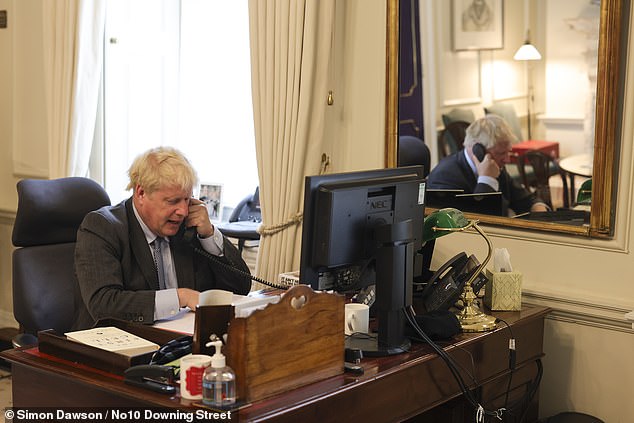 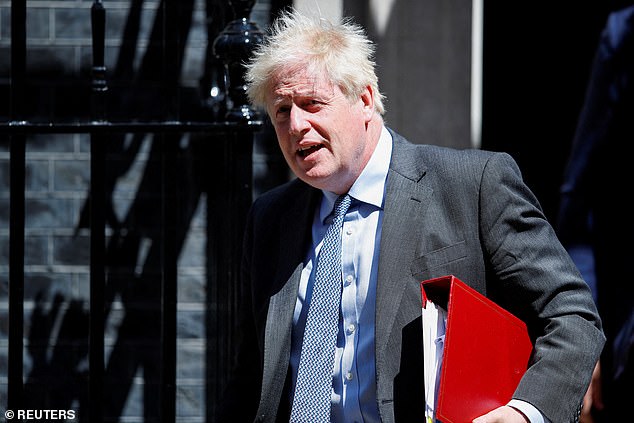 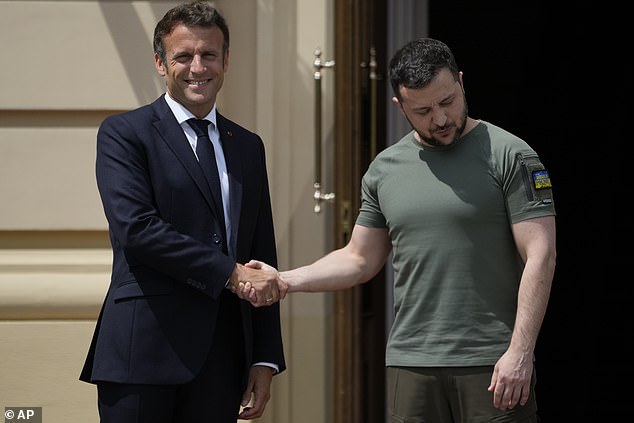 Emmanuel Macron, dressed impeccably in his trademark dark suit, flashed a smile as he posed for cameras and clasped Zelensky’s hand on Thursday.  But the Ukraine’s Churchillian leader simply scowled at the floor, evidently displeased with the posturing 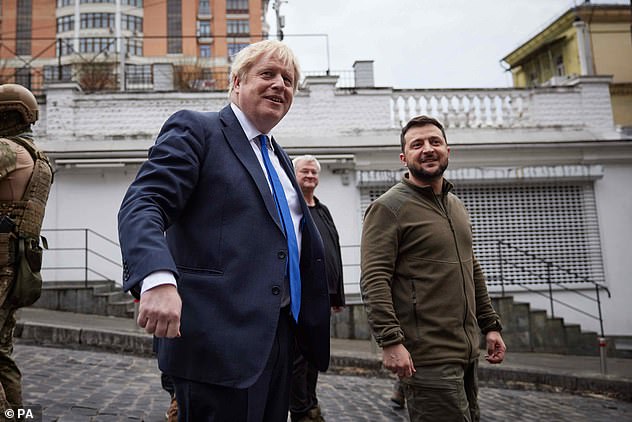 Zelensky’s behaviour around Macron is a stark contrast to the warmth and enthusiasm with which he has greeted officials from the US and UK – particularly Boris Johnson (pictured dated Sat, April 9)

The French, German and Italian premiers travelled into the country by train before holding talks with Mr Zelensky and then heading for the suburb of Irpin to see firsthand the devastation wrought by Putin’s troops and evidence of war crimes.

Mr Macron denounced the ‘barbarism’ of the attacks and praised the courage of Irpin’s residents and others in the region who helped thwart Russia’s attempt to overrun the capital.

But there was an awkward attempt to pull the Ukrainian leader into an embrace at a joint press conference, and images of the pair shaking hands earlier in the event looked similarly one-sided.

Mr Zelensky has in recent weeks openly accused Mr Macron of making excuses for Putin, with whom the French leader previously boasted a strong relationship, and has criticised his government for not providing enough weapons and support to help Ukraine’s war effort.

His body language around Mr Macron is a stark contrast to the warmth and enthusiasm with which he has greeted officials from the US and UK – particularly Mr Johnson.

The EU today gave its blessing to Ukraine and its neighbour Moldova to become an official candidate to join the bloc – with EU Commission President Ursula Von der Leyen announcing the move wearing blue and yellow.

The move represents an historic eastward shift in Europe’s outlook brought about by Russia’s invasion of Ukraine, which dramatically shattered peace in Europe and changed the perception of the bloc’s leaders.

Ukraine applied to join the EU just four days after Russian troops poured across its border in February. Four days later, so did Moldova and Georgia – two other ex-Soviet states contending with separatist regions occupied by Russian troops.

‘Ukraine has clearly demonstrated the country’s aspiration and the country’s determination to live up to European values and standards,’ the EU’s executive Commission head Ursula von der Leyen said in Brussels.

She made the announcement during a press conference of Friday wearing Ukrainian colours, a yellow blazer over a blue shirt. Ukrainians were ‘ready to die’ for the ‘European dream,’ she said.

Noel Gallagher ‘SPLITS from wife Sara MacDonald after 22 years together’

Man hurls petrol bombs at migrant centre in Dover before taking his own life,...